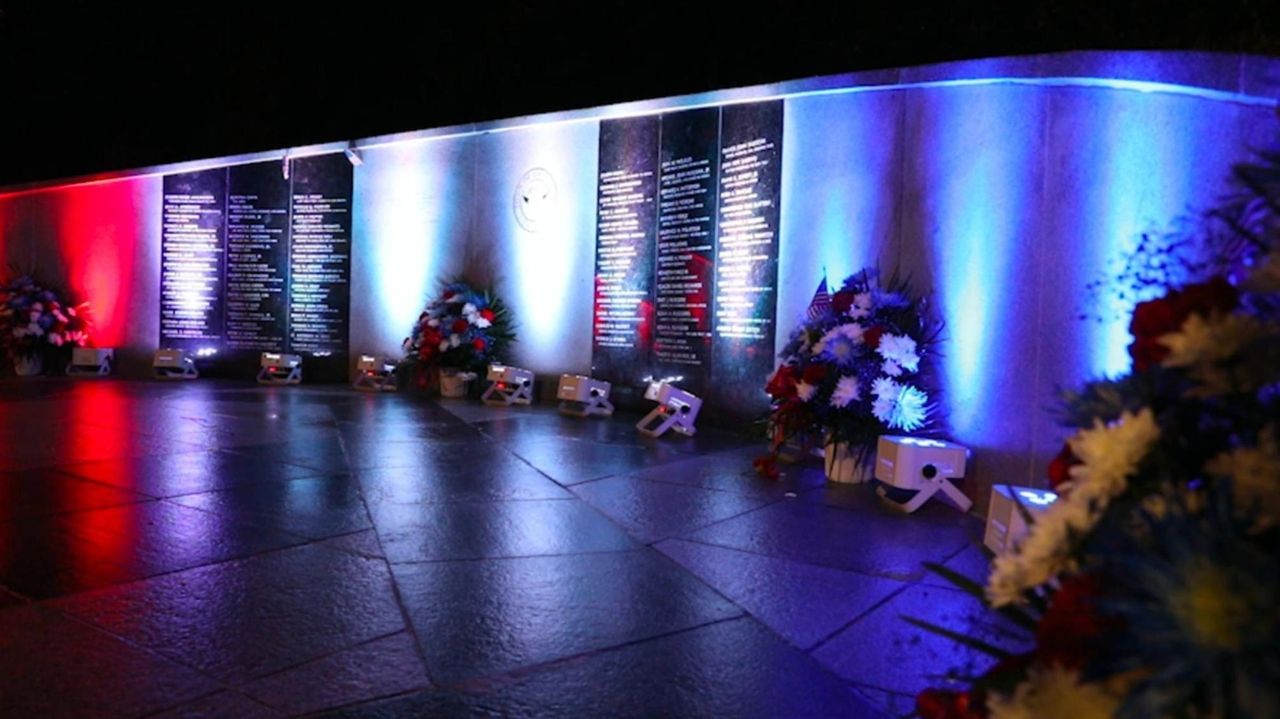 Tributes were held at Eisenhower Park and Tobay Beach on Thursday to honor the lives lost on 9/11 and those lost to related illnesses.    Credit: Nassau County executive office; Morgan Campbell

An Eisenhower Park tribute to 9/11 victims Thursday night included Nassau families reading the 348 names of relatives killed in the attacks and a dedication of a new memorial to sickened first responders who have died in the years since.

County officials dedicated a plaque to the first responders at the existing 9/11 memorial at the park, located in an area overlooking the lake and including a monument to the Twin Towers.

Nassau County Executive Laura Curran praised the selflessness of the first responders at the World Trade Center after the attacks, and the workers in the towers on that Tuesday morning.

"I know we’re all reflecting on 20 years and the ache is still there and still a hole in the soul," Curran told about 200 people gathered at the Harry Chapin Lakeside Theatre. "The rawness doesn’t just go away."

The event was among many planned on Long Island and New York City in the coming days to commemorate 20 years since the two hijacked commercial jets crashed into the towers, killing 2,753 people, including 343 firefighters and 23 NYPD officers.

At Eisenhower Park, the family members who read the list of names each paused to remember their loved one who died that fateful day. They shared a picture, a memory, a prayer or a poem of their relatives who were lost.

Cathy Collins remembered her sister, Laura Marchese, of Oceanside, who was working on the 102nd floor of the north tower.

"Twenty years doesn’t make it any easier," Collins said. "I’m just thankful for the 35 years we had with her."

Margie Miller, whose husband, Joel Miller, from Baldwin, died on the 97th floor of the north tower, lamented he never got to meet his grandchildren.

She noted that two decades afterward, victims, like Dorothy Morgan of Hempstead, are still being identified by DNA, and family members of those killed have passed on.

"Two others were identified this week and one was ours," Miller said of Morgan, who "worked with my husband and it’s quite amazing 20 years later to say Dorothy’s home. Twenty years is a really long time and we are a community and a family."

Curran said the memorial wall will serve as a reminder of what happened on Sept. 11, 2001, and the price still being paid by first responders.

"What do we do to honor those lost that day and continue to be lost because of 9/11 related illness? We continue to defend our precious freedoms," Curran said. "We can also remain kind and calm and not let the seeds of chaos take root and grow."

Nassau County Fire Chaplain the Rev. Kevin Smith read a prayer at the dedication and talked about how the nation vowed to never forget what happened.

"As we come together tonight two decades later, we’ve kept our promise. We remember by name all lost in our Nassau County community," Smith said. "We ask you all to hold in loving embrace all those suffering from 9/11 illnesses and bring them health. And if they succumb, give them rest and peace."

After names were read, friends and family walked to the memorial wall, which lists the names of those lost on 9/11, their hometown and profession.

Laura Anne Loud, 63, of North Bellmore, traced the names with her fingers and kissed her hand to her fallen friends and co-workers from Manhattan Supreme Criminal Court.

"I can’t believe it’s been 20 years," she said. "Twenty years ago I went to a lot of funerals and comforted a lot of people. Now 20 years later, I’m doing the same thing for first responders for various illnesses. No one knew anyone was going to get sick and I’m one of them. I’d do it again in a heartbeat."

CORRECTION: A previous version of this story misstated the number of names read at the Eisenhower Park event.