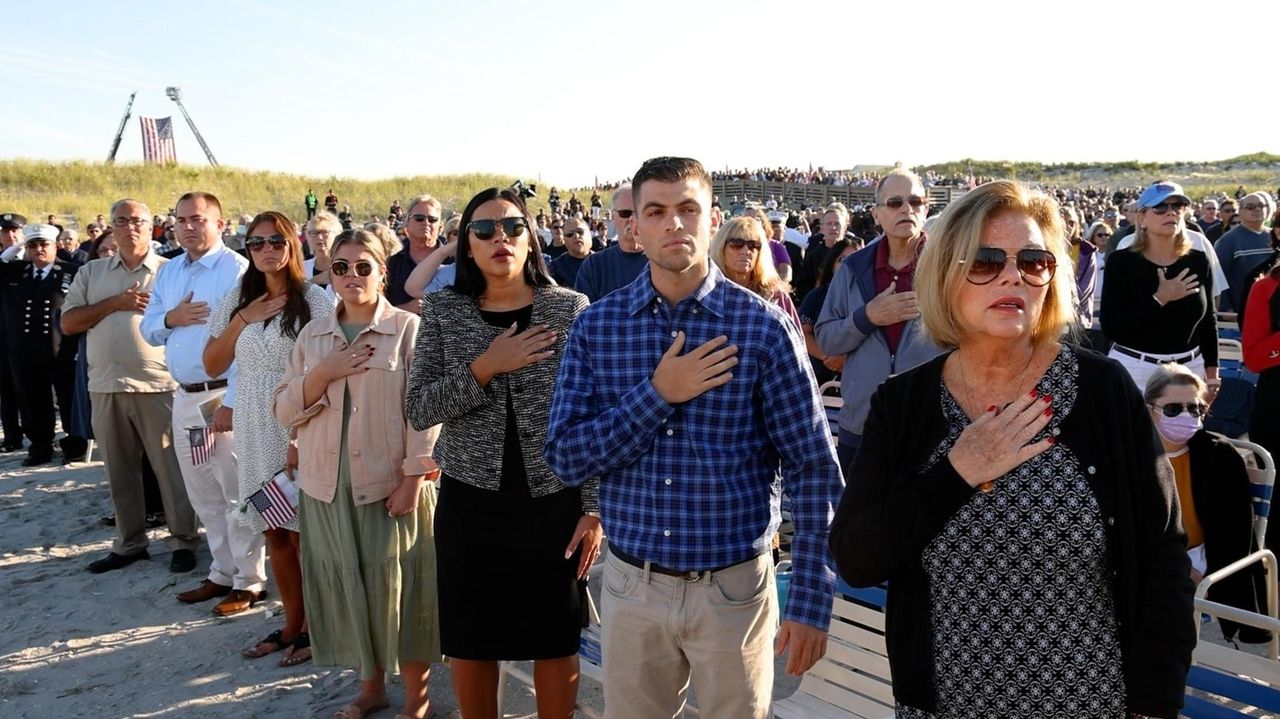 In solemn ceremonies and community gatherings, Long Islanders spent Saturday honoring and remembering those who were lost 20 years ago in the Sept. 11, 2001, terror attacks.

Some people spent quiet moments alone to reflect, while others sought the comfort of company at numerous events in Nassau and Suffolk counties.

From the Long Beach waterfront to a memorial fountain in Southampton to a wreath-laying ceremony in Calverton, Long Islanders took time to mark the anniversary with prayers, music and readings.

About 3,000 people attended a memorial at Point Lookout Beach, including Jennifer Muller of Lynbrook, whose brother Michael Hannan worked on the 98th floor of the north tower of the World Trade Center.

"I like coming here, someplace close to home," Muller, 56, said. "Time has gone on. His oldest daughter got married and it’s important we remember this day every year so hate never wins again."

The event’s keynote speaker, NYPD Det. Vincent DeMarino, formerly of Valley Stream, recalled being pulled from his fifth-grade class on Sept. 11, 2001, unsure if his father, NYPD Deputy Insp. Vincent DeMarino — who had rushed into Manhattan on his day off — would make it home.

"He came home at 2 a.m. and our prayers were answered," he said.

The elder DeMarino continued to work at Ground Zero for the next four months and in 2018 was diagnosed with brain cancer from 9/11-related illness. He died a year later.

"Thousands of first responders worked on the pile. They all knew the risks, but it didn’t stop them," DeMarino said. "He told me he was most proud of his time at Ground Zero. He wouldn’t change anything."

Almost 500 of the 2,753 people who died in the World Trade Center attacks were from Long Island, and more died later from illnesses caused by their work at the site.

"There’s a whole generation that doesn’t know 9/11 happened, and it’s our duty to keep memories alive and tell their stories," DeMarino said.

Residents took carnations, flags and markers to trace the names of loved ones listed on the town’s memorial.

Island Park firefighter Matt Graci — who was working as a broker on the floor of the New York Stock Exchange when the first tower was hit — rang a bell for the victims.

Debra Sherry, 67, of Long Beach, threw carnations into the ocean to remember her brother John Sherry, 34, of Rockville Centre, who was working on the 84th floor of the south tower.

She comes to Point Lookout every year to remember him but has no grave to visit.

"It’s the same pain and sadness. It’s the same sense of loss. He had two sons and life goes on, but he’s never forgotten," she said. "There’s a lot of disbelief from all of us because they never found his remains to this day."

"Many people don’t realize there are so many families that didn’t have a body to bury. Ground Zero is their final resting place," Blakeman said.

Jergens was a court officer when the towers were hit and he rushed to the site to help. He was treating a burn victim when the second tower collapsed. Family members recovered only his pistol and his shield.

Lt. Gov. Brian Benjamin noted the terrorists who chose to attack the country didn’t differentiate between political parties or race or creed.

"They were attacking the U.S., and anyone in the U.S. was a victim," Benjamin said. "I recognized I’m part of an entire U.S. family. What happens to one of us happens to all of us. … As we move forward, we have to remember there’s nothing we can’t get through."

Bells and remembrances in Southampton

In Southampton, water streamed down a piece of World Trade Center steel outside a memorial fountain at the fire department headquarters. There, more than 100 volunteers, officials and community members, including dozens of uniformed firefighters, gathered to reflect on the day.

Matthew O’Connor, second assistant chief of the Hampton Bays Fire Department, was working for Deutsche Bank at an office on Liberty Street on 9/11, but he was late for work that morning. He remembered exiting a subway station into a world covered in soot and ash and knowing immediately that New York had been attacked.

O’Connor wandered the downtown streets until the second tower collapsed and he was told to run.

"If you've ever seen a Godzilla movie … that screeching sound, that creaking sound, that was the sound I heard," he said. "It was the metal of the building, bending, coming down."

The events inspired him to join the fire department and become a Southampton Town 911 dispatcher, he said.

A bell rang out six times during the morning, marking the minutes when the four hijacked planes crashed into the World Trade Center, the Pentagon and a field in Pennsylvania, and when the two towers collapsed.

In Calverton, more than 40 people circled the World Trade Center Memorial Park at the corner of Riley and Edwards avenues for a wreath-laying ceremony.

Riverhead Town Supervisor Yvette Aguiar, who had worked as an NYPD officer in Manhattan during the attacks, recalled how "a cool September day would become an unimaginable day, becoming the darkest day in American history."

Town officials placed a red, white and blue-flowered wreath at the site, and members of the Riverhead Veterans of Foreign Wars Post No. 2476 stood to salute the flag at half-staff.

"There's no words that would ever be able to express the gratitude that we have for those people," said Joel Dupree, minister of Living Water Church in Riverhead.

After the ceremony, people continued to share stories, including Harold Lindstrom, 72, from Riverhead, who not long after the attacks raised roughly $50,000 to help create the memorial park site.

While he didn't know anyone personally who died during the attacks, Lindstrom said he was compelled to do something to help remember those who died that day.

At Islip Veterans Memorial Park, officials read the names of 90 Islip Town residents who died in the attacks.

Jeanmarie Rall, 54, wiped away tears with tissues as her husband, Bill Rall, 55, stood by her side. The couple each lost a brother that day: Joseph A. Corbett, 28, a securities trader at Cantor Fitzgerald, and Edward J. Rall, 44, a New York City firefighter.

The first thing that came to Nancy Nee’s mind Saturday was the cool air and beautiful blue skies, strikingly reminiscent of the day 20 years ago.

Since her brother’s death, Nee saw the passage of time manifest itself in the changes of her children.

Jaymie Espinola, 19, of West Islip, said she was named for her grand-uncle, James J. Suozzo, a corporate bond broker at Cantor Fitzgerald who perished in the attacks.

"There are pictures of him around my house," said Espinola, as she held hands with her mother, Debbie, 51, who wore a pin with Suozzo's photo. "It makes me happy just to look at him because I like to think that we know each other even though we've never met."

"It is difficult to comprehend that it has been 20 years since the morning of Sept. 11, 2001," Bellone said. "The images and pain from that day are still ingrained in our hearts and minds."

Bellone also marked the planting of a seedling, which is a descendant of the famous "Survivor Tree," a pear tree rescued from the World Trade Center site. He called the tree a "living symbol of resilience, survival and rebirth."

At the Cemetery of the Holy Rood in Westbury, hundreds of families attended an outdoor Mass at the facility’s 9/11 memorial.

Bagpipes played "Amazing Grace" while mourners said the Lord’s Prayer and took Communion. Some in attendance wept quietly and held hands, while others carried flowers and held FDNY sweatshirts close to their chests.

In recent weeks, 100 additional names of Long Island 9/11 victims were added to the granite memorial wall, including, for the first time, those who died of Sept. 11 illnesses. There are now more than 500 names on the wall, etched on both sides of the stone.

As he has for the past 20 years, John Heslin, 81, of Carle Place wore a blue bracelet bearing the name of Glen Pettit, an NYPD officer from Oakdale and an award-winning former News 12 Long Island videographer.

Heslin was best friends with Pettit’s late father and helped raise Glen, who died in the south tower while documenting the heroics of his brothers in blue.

"Today is tough," said Heslin, a retired NYPD officer, as he gripped a photo of Pettit in uniform. "It means the world to carry his name and respect."

Cathy Mercurio-Gambaro came to the Mass to honor the memory of her older brother Ralph Mercurio of Rockville Centre, who worked for Cantor Fitzgerald.

"Of course it’s a day of remembrance, but it’s also about life," said Mercurio-Gambaro, of Brooklyn. "We will be doing something fun this afternoon to celebrate my brother’s life because that’s what he would have wanted."

Bishop John Barres of the Diocese of Rockville Centre said faith, love and hope were the central tenets that had brought 9/11 families together.

"As we remember the 20th anniversary of that tragic day, these virtues which emanate and gather us can serve as a lens," Barres said in his homily. "They can focus our thoughts and prayers. They can help us see God in the midst of confusion and heartache. They can remind us of our path forward."