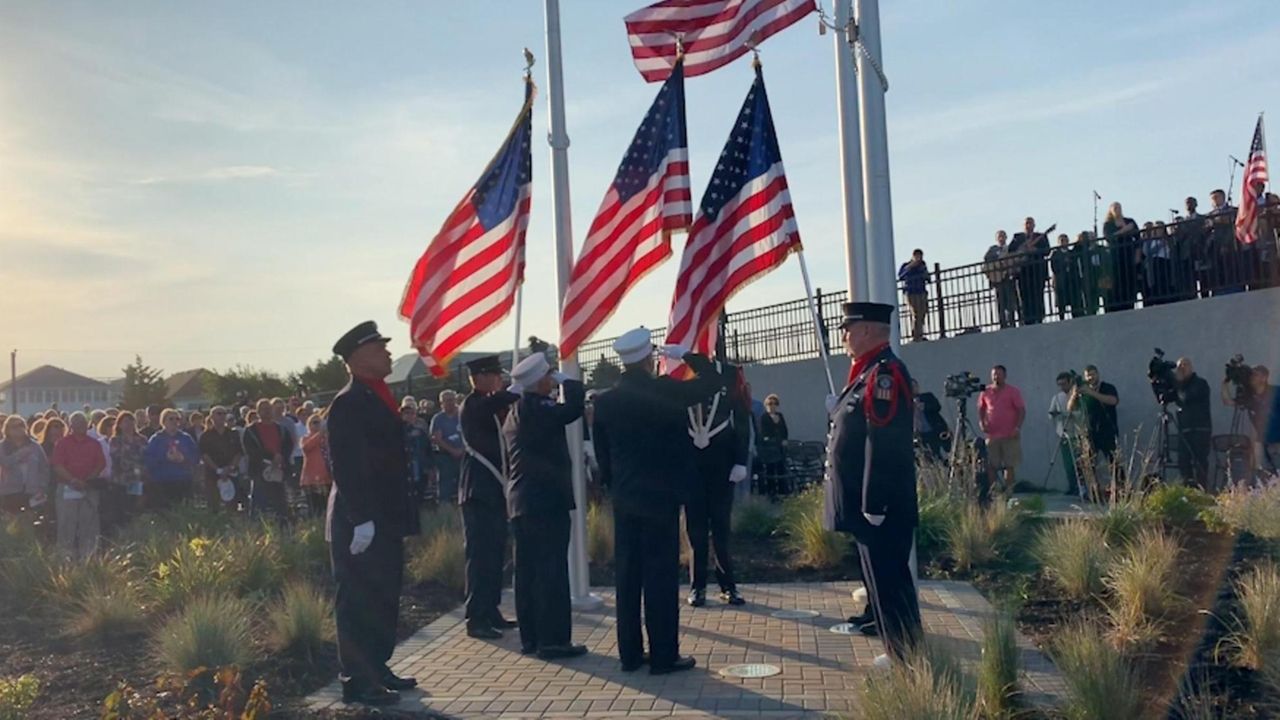 On Wednesday, close to 2,000 people gathered at a beachfront 9/11 memorial service in Point Lookout, as mourners handed out tissues and officials honored the dead, including scores from Nassau County. Credit: Howard Schnapp

On the morning of Sept. 11, 2001, hundreds gathered spontaneously on the beachfront at Point Lookout to look across the water at a distant lower Manhattan. They watched the black smoke billow to the sky as the Twin Towers collapsed and burned.

About 2,000 people returned Wednesday to what is now Hempstead Town's official 9/11 memorial at Town Park to honor those who died — the pain still sharp despite the passage of 18 years.

Mourners handed out tissues for those weeping as they recalled, with fresh sadness, the victims — including scores from Long Island. They spoke of lost loved ones and children growing up without a mother or father.

Darren Craig, 50, of Woodmere, said he was leaving 5 World Trade Center the morning of the attacks when he saw the first plane hit.

For months afterward, Craig had nightmares of trying to catch the people he saw leaping from the buildings as flames forced them to jump to their deaths.

“Until the day I die," he said, "my heart has a little hole in it for the people that perished."

Firefighters in uniform stood on the arched overpass overlooking the crowd at the memorial, a massive American flag hanging above them. Beneath them stood a granite wall containing the engraved names of the dead.

Barbara Hayes, 54, of Point Lookout, said she has watched the children of friends killed in the attacks become teenagers and adults with a parent absent.

“Just seeing all these children growing up without parents, wives doing it on their own without their husbands, husbands doing it without their wives, it’s just horrible, and it still feels the same,” she said. “It doesn’t get easier.”

Hempstead Town Supervisor Laura Gillen called the attacks a “vicious” assault on the United States, but said the response by Americans showed the country's greatness.

“In the aftermath of 9/11," Gillen said, "we witnessed the grit, the goodness, the determination that became characteristic of the American spirit as our police, our firefighters and our neighbors rushed to help those in danger and those in grief."

More than 30 miles east, a crowd of 200 gathered Wednesday night at Islip's 9/11 memorial to honor and read the names of the 90 town residents who perished in the attacks. The town placed 90 American flags around the memorial, which was built from steel recovered at Ground Zero.

Town Supervisor Angie Carpenter said it's critical that future generations understand not only the horror of Sept. 11 but also how town residents came together to support each other in their darkest hours.

"Although nearly two decades have passed since that fateful day, we continue to mourn, honor and remember the lives of all those lost in the attacks," Carpenter said.

9/11: A Decade Later Newsday reached out to the families of every Long Islander who lost a loved one on Sept. 11, 2001. This is a compilation of interviews made during the year leading up to Sept. 10, 2011. (Credit: Newsday Staff)

Rose Marie Chiofalo-Maggiore said her son, Nicholas Chiofalo, an FDNY firefighter with Engine Company 235 in Brooklyn on Sept. 11, 2001, was "born to save others." Chiofalo, of Selden, had completed a 24-hour shift before the attacks but stayed on and headed to the World Trade Center. He was never heard from again.

"It's heart-wrenching but I am so proud of him," said Chiofalo-Maggiore, of Oakdale. "He will never leave my heart."

Chiofalo-Maggiore's other son, Anthony Chiofalo, was an NYPD detective who rushed to Ground Zero after the attacks. He has since suffered a stroke and lost most of his vision, an ailment he attributes to the toxins in the air of lower Manhattan, his mother said.

"They took one son and now they are working on the other," she said.

After the ceremony, Joan and Edward Rall laid flowers at the memorial to honor their son, Edward Rall, of Holbrook, an FDNY firefighter at Rescue 2 in Brooklyn who died rushing into the towers.

LI students hold moment of silence for 9/11 attacksA new state law encourages schools to observe the remembrance, although many LI students have been doing this for years. 9/11 ceremonies offer a chance to reflect, healThousands of families, residents and law enforcement officers crowded the 9/11 Memorial Plaza in lower Manhattan on the 18th anniversary of the nation's worst terror attacks. Years later, 2 kids honor their dad who died on 9/11When firefighter Michael Haub died after responding to 9/11, his son was just 3 years old and his daughter only 16 months. 9/11 hero Alvarez honored on eve of anniversary"This is the first year of 9/11 that we don't have him with us," the Brooklyn borough president said of Det. Luis Alvarez.