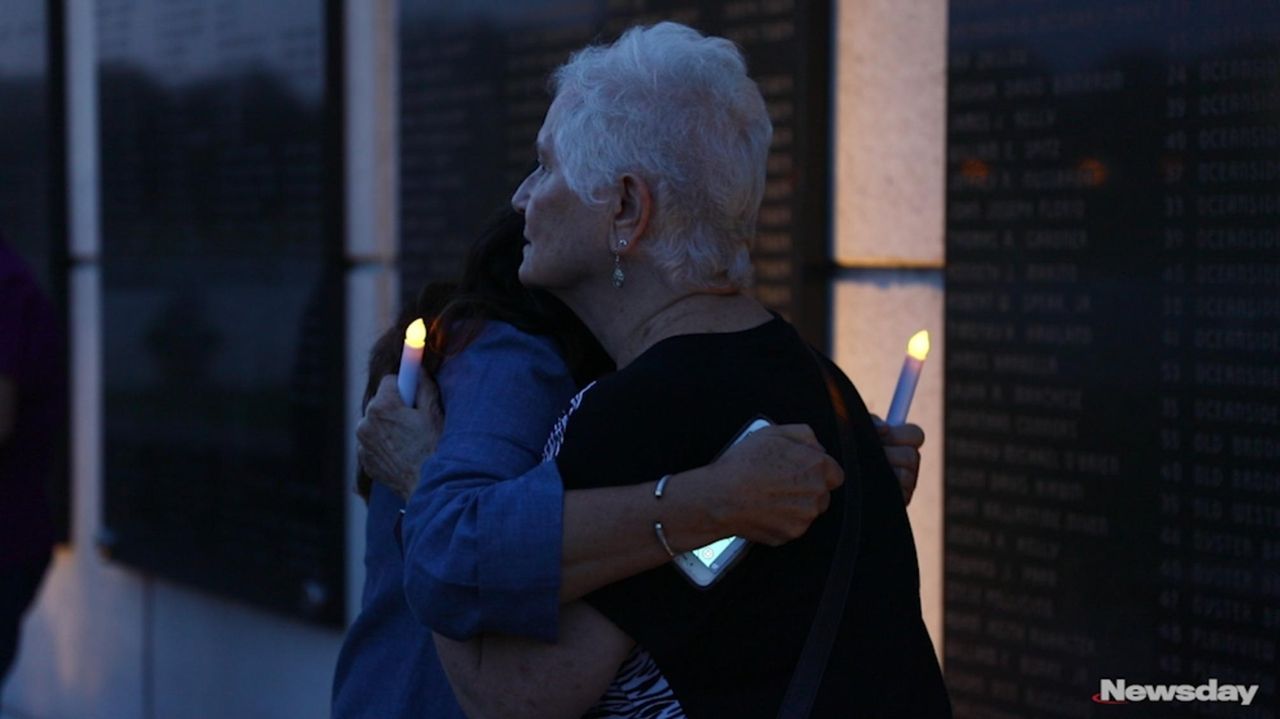 On Thursday, Sept. 7, 2017, Nassau County held a ceremony at the 9/11 memorial at Eisenhower Park in East Meadow to commemorate the 16th anniversary of the events of Sept. 11, 2001, in which 349 Nassau County residents lost their lives in terrorist attacks. Credit: Newsday / Megan Miller

Rosemary Cain of Massapequa held up a large photo of her grinning son, George, 35, a seven-year veteran FDNY firefighter 16 years ago Monday, as she read the names of Nassau residents who died in the country’s worst-ever terrorist attack.

Cain was among 14 people designated to read the names of some 349 victims of the Sept. 11, 2001 attacks during the solemn ceremony at the 9/11 Memorial in Eisenhower Park Thursday night, an event hosted by County Executive Ed Mangano and attended by community members, county legislators and other officials.

The event featured the voices of Girl Scout Troop #2223, who sang the national anthem, and the wail and beat of the Nassau County Police Department’s Emerald Society Pipes and Drums, which played “Amazing Grace.”

“It’s imperative that we remember this day by reflecting and honoring those who lost their lives that tragic morning and the bravery and heroism that was shown by our first responders and all our servicemen and women,” Mangano said.

Like many other relatives and friends of victims of the attacks that took nearly 3,000 lives when hijackers crashed planes into the World Trade Center, Cain has attended the event for many years.

But she said it doesn’t get any easier. Her son grew up in Massapequa and was assigned to Ladder 7 in Manhattan the day he died.

“We are so proud of you, George,” she told a crowd of about 250 people gathered at the site where two steel replicas of the Twin Towers soar out of a reflecting pool set off from 10 black granite panels with the names of the victims etched into the stone. “It was my honor to be your mother for 35 years.”

Other readers’ voices cracked as they uttered their loved ones’ names. Spectators often wiped their eyes as they listened to the melancholy roll call.

“The day you were taken from us was the day that our hearts were taken never to be whole again,” said Kerri Kiefer-Viverito, whose spoke of her brother, Michael Kiefer, a firefighter with Ladder 132 in Brooklyn. “Sixteen years may have passed but the pain of losing you only grows stronger.”

Gregory Hoffman, who read off names leading up to that of his brother Stephen, 36, of Long Beach and a Cantor Fitzgeral d trader 16 Septembers ago, said he attends the 9/11 Remembrance Ceremony and has developed a bond with the other 9/11 families.

“I just think it’s important that we keep on telling the story,” he said, adding that the observance in Nassau has a special place for him. “It’s very poignant and it’s very intimate . . . It gives me a warm feeling in my heart.”

Mangano said in closing the ceremony that, “It takes an enormous amount of strength to come before you and a lot of emotion to overcome to get the words out,” referring to the readers. “I can tell you how grateful I am that you found that strength.”