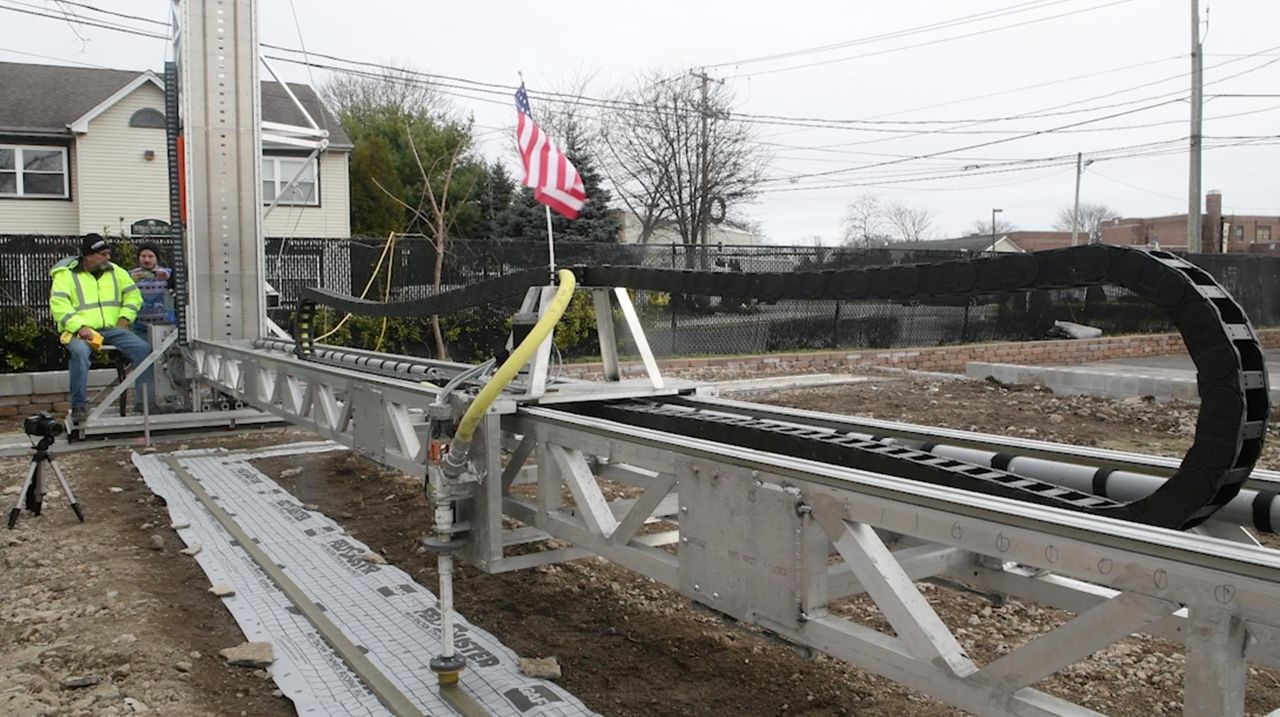 Owners of S-Squared 3D Printers, a 4-year-old manufacturer and online retailer of 3D printers for hobbyists, libraries and STEM programs, said they have developed a large machine capable of printing a four-bedroom ranch-style home out of cement in under 48 hours. The printer, named Neptune, resembles traditional 3D printers in the consumer marketplace except for its size, software and the material it uses for printing.

“It’s definitely going to change the way things are built,” said Robert G. Smith, president and co-founder of S-Squared. Smith said the firm plans to print its first test home in March and believes the technology could one day produce lower-cost homes for Long Islanders. Many of the additives and coatings S-Squared will use in the cement will make structures waterproof and highly fire-resistant, all of which could save homeowners on insurance costs, Smith said.

Traditional 3D printers can be placed on a table and use heated plastic — analogous to ink in an office printer — to create precise layers and angles that result in the creation of a 3D object. S-Squared’s Neptune works similarly, though the machine would use cement to print structures 20 feet high, Smith said.

With the new technology, the company said, exterior and interior walls can be built up one layer at a time. Simultaneously, the interiors of those walls are reinforced with a “Z” pattern of connecting cement, and the machine’s “super computer” can even create built-in conduits for piping and wiring, making electrical and plumbing installation easier.

After the initial layout of a building is printed, the cement can cure, a roof structure can be placed, and fixtures can then be added.

“We’re looking to change the world with it,” said Smith, who co-founded S-Squared with friend and business partner Mario Szczepanski. The company said it has been in contact with the Long Island Housing Partnership to discuss the potential uses of the technology to develop affordable housing. “We’re picking up the right people and the right organizations to help us along,” Smith said.

But the new technology still faces hurdles like funding and navigating existing building codes and procedures.

The firm, which has seven employees, launched a new  division in 2017 with the goal of printing functional home structures. S-Squared prints many of the smaller components for Neptune using its smaller 3D printers.

While the company has run design tests at its headquarters and machine shop in Patchogue, company executives said they’ve been unable to test-print an entire home due to zoning and building requirements in the village.

Brian Egan, attorney for the village, said local building stipulations require that construction methods be approved by New York’s Department of State, which S-Squared’s have not.

“A building method like this is beyond the scope of the village to reverse engineer or approve,” Egan said.

Instead, the company has partnered with Calverton-based Suffolk Cement Products Inc., an 81-year-old supplier of concrete mix and blocks. Suffolk Cement will allow S-Squared to print its four-bedroom design on a portion of its property under an “experimental temporary structure” exception through the Town of Riverhead’s building department. The prototype structures will have no roofs, not be eligible for certificates of occupancy, and must be demolished within a year.

Suffolk Cement also will help identify the best cement formula to be used for Neptune.

“It’s definitely a huge step forward,” said Mark Lohr, third-generation owner and chief executive of Suffolk Cement. Lohr said he will be going to a concrete industry trade show later this month to try to identify a better pumping and mixing system for S-Squared’s printer.

Although S-Squared will need outside funding  to ramp up testing and potential rollout of the technology, Smith said the company envisions that 3D-printed structures will become a cheaper and safer alternative to traditional construction methods.

"Ultimately it would nice to have all this done robotically. It’s not science fiction,” Smith said. "Who knows where it’s going to go.”

Take a virtual tour of a 3-D home conceptPatchogue-based S-Squared 3D Printers has created a 3-D printer, named Neptune, that company officials say is capable of printing a four-bedroom ranch-style home out of cement in under 48 hours. S-Squared created a concept of a three-bedroom, one-bathroom home with a garage that viewers can tour virtually.