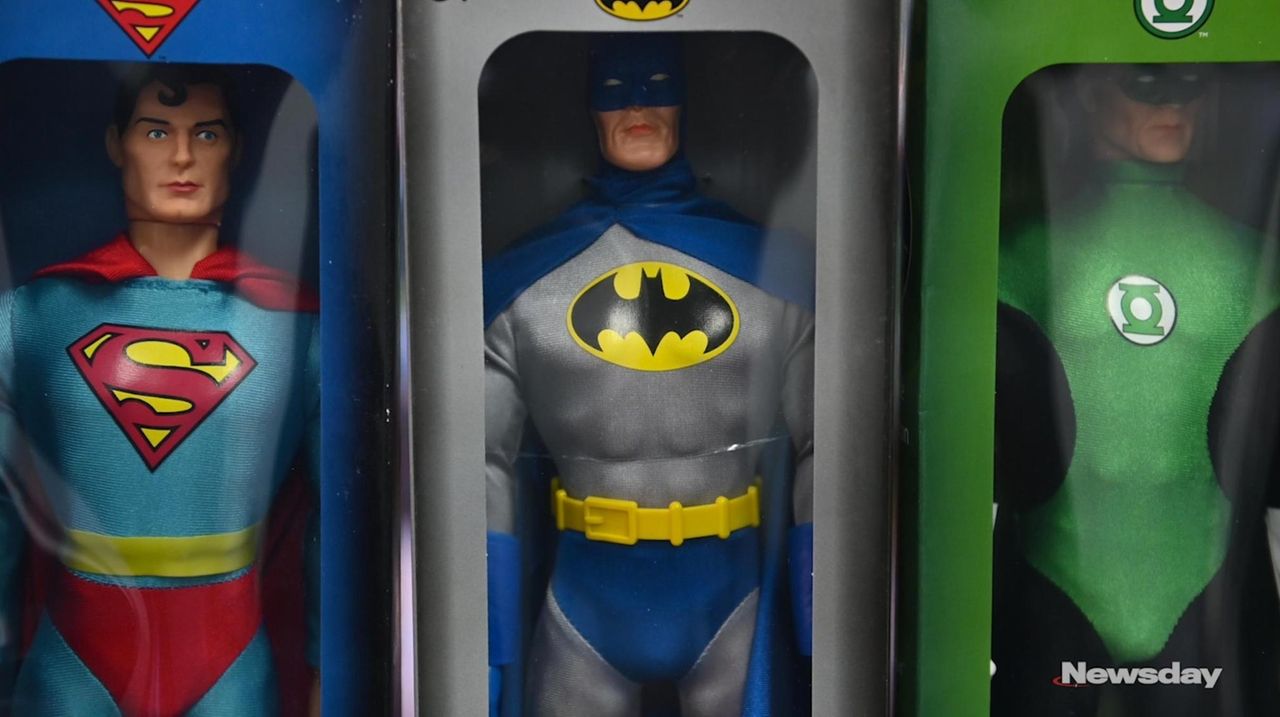 On March 8, Mego president Marty Abrams explained the rise and fall of the business and what brought back the company.  Credit: Newsday / Alejandra Villa Loarca

Abrams, who pioneered the licensed action-figure business in the early '70s, argues that they offer access to the collectibles market even to those with modest means. "If you're not rich, you can't turn around and buy a Picasso, a Matisse or a Renoir."

U.S. sales of action figures and accessories totaled about $1.6 billion in 2018, based on retail transactions tracked by Port Washington-based researcher NPD Group. That figure, a 10 percent increase over the previous year, represented about 7 percent of the overall domestic toy market.

"The action-figure business has been one of the fastest growing parts" of the toy industry, said Stephanie Wissink, an analyst at Manhattan investment firm Jefferies LLC.

At least part of the reason, she said, is demand from adult collectors, who account for as much as a quarter of sales, according to some estimates.

Most action figures can be picked up on a whim, such as the 12-inch action figure of evil Marvel character Thanos on sale at Target for $14.99. Others require a bit more consideration. One vintage Kenner 1977 Obi-Wan Kenobi Star Wars figure was selling recently on eBay for $55,000.

Matthew Cardona, a native of Merrick and graduate of Calhoun High School, said he has been collecting action figures since boyhood. Now a 33-year-old professional wrestler under the ring name Zack Ryder, he's still at it.

"I look at the figures as artwork," said Cardona, who moved to Orlando, Florida, from an apartment in Long Beach to have room to display his collection, which he estimates is worth a half million dollars. "I have an entire room of all toys whether wrestling or Ninja Turtles. It's more like an obsession than a collection."

One recent addition: a life-size figure of Star Wars' Han Solo depicting a movie moment when he was frozen in carbonite.

Cardona said their intense interest in action figures made the podcast a natural. "We talk about it every day anyway," he said. "I can't explain to you why I never grew out of the toys … I'm fascinated about the whole concept."

A search of Amazon.com revealed a slew of Zack Ryder figures, including a "basic" 6-inch figure for about $10 that could be posed in a "menacing stance" or used to battle other figures and "create total mayhem," as well as a 6-inch "elite collector" version with "deluxe articulation" and "amazing detail" for more than $100.

"In essence, it's a leasing arrangement," said Martin Brochstein, senior vice president of the International Licensing Industry Merchandisers' Association in Manhattan. Typically, a manufacturer agrees to pay a royalty, but also provide a minimum guaranteed payment.

"That gives the manufacturer skin in the game," said Brochstein of Wantagh. "He can't take the license and say, 'Forget it.' "

Hasbro has its own Transformer brand and license deals to produce characters from the Marvel and Star Wars franchises. The company posted 2018 net revenue of $4.6 billion,  a drop of 12 percent from the previous year,  reflecting in part the liquidation of the major national retailer Toys 'R' Us. Hasbro paid royalties amounting to almost 8 percent of net revenue.

Mattel, with 2018 net sales of $4.5 billion, has licensing agreements for WWE Wrestling and NBCUniversal's Jurassic World properties as well as Batman, Superman and Wonder Woman from Warner Bros.

Burt Flickinger III, managing director of Strategic Resource Group in Manhattan, a consumer industry consultancy, said the liquidation of 740 Toys 'R' Us stores in 2018 has trimmed sales of action figures by as much as 10 percent.

Smaller action-figure retailers on Long Island hope to fill in the gap left by the big-box store.

April Jager, owner of Chosen One Collectible Toys in West Babylon, said she began collecting action figures in her teens, making that a natural avenue when she opened a retail business.

"The whole store is just action figures," she said.

The store, with merchandise ranging in price from "$1.99 to $700" attracts collectors young and old.

One 8-year-old girl surprised Jager when she inquired about a shipment of figures of "The Golden Girls," a sitcom that aired in the 1980s and 1990s about feisty elderly women.

Alex Kuvish, owner of Fantastic Toyage Inc., a 2.500-square-foot store in East Massapequa, specializes in Star Wars toys, which accounts for about two-thirds of his business.

"We have everything from light sabres and blasters to statues to action figures," he said. "People will come in and say, 'Your place is like a museum … Dude, I'd pay admission to come into your place.' "

When new Star Wars movies come out, Kuvish said, he rents a movie theater for his customers and hands out "swag."

"I secure the entire theater, and we can enjoy the movie together like family," he said.

Jim Makowski runs an action-figure mail-order business, Action Toys & Collectibles, in Bohemia. The business had its genesis around 1988 when he bought a collection for about $200. Makowski began selling pieces that he didn't want to keep and eventually created a catalog that grew to 100 pages.

He discontinued the catalog in 2011, and these days maintains a warehouse and sells new and vintage action figures online. He also plays guitar and writes songs for Long Island rock band Grimm Jack.

With Toys 'R' Us and other brick-and-mortar toy stores gone, analyst Flickinger estimated that action figure sales will go from 15 percent online to 50 percent online by 2025.

Online business opens up a global market for Makowski, who estimated that international orders account for about 30 percent of his sales. "We have some people overseas that buy from us every month," he said. "Italy is big, Japan, Europe in general. Super heroes are very international."

Makowski said prices on sites like eBay help him size up the market when he buys a vintage collection, but the prospects of new items can be uncertain.

"It's like buying stock on the stock market," he said. "It's a lot of work to sell a $20 item. We're not starving, but we're not on a yacht or driving a Lamborghini either."

The market for action figures arguably began when Hasbro in 1964 introduced G.I. Joe, designed to give boys a doll equivalent.

When Abrams joined his family's toy importing business in the early 1970s, he saw an opportunity in licensing the rights to celebrities such as Sonny and Cher, athletes like Muhammed Ali and Joe Namath and fictional characters.

These days, the release of movies like the upcoming "Avengers: Endgame" drive toy sales, but the action-hero genre had not developed in the early 1970s.

The History of Dolls website credits Mego as the first to license superhero characters for action figures in the early 1970s.

"When I did Batman and Superman, I was the only one to do it," Abrams said. "We were doing the toys before the movies came out."

Another wrinkle, Abrams said, was to make action figures of antagonists like Batman's archenemy, the Joker.

"There were no bad guys," he said. "[We made] good guys and bad guys. That was a major innovation."

Mego's action figures, manufacturered then and now in the Far East, were distinguished by costumes made of fabric instead of plastic molded as part of the character. "That was the Mego way," he said.

At the top of its game in the late 1970s, Mego had about 4,000 employees, almost all in Hong Kong factories, and was doing more action figure business than Hasbro, Abrams said.

By 1982, however, an ailing Mego filed for Chapter 11 bankruptcy, and Abrams was convicted of wire fraud in connection with a scheme to misappropriate funds.

Abrams said he has "rebuilt" his life since then and was ready to resurrect Mego when retail giant Target Corp. in 2018 offered the opportunity to supply an exclusive action figure line.

"I said, 'Why don't you bring back the old brands?" Abrams said. "A good portion of the brands I did in the '70s were available to reboot."

Mego rolled out retro-themed figures of The Fonz from "Happy Days," Peggy Bundy from "Married with Children," and Norm from "Cheers," complete with beer mug, as well as Batman, Harley Quinn and Captain Kirk and Spock. The company notched $10 million to $12 million in sales in about six months, Abrams said.

These days, Mego has about 10 employees designing its action figures, which feature 14 points of articulation, or joints. The company uses interchangeable bodies that it manufactures in factories in China. Mego designers sculpt the heads and ship clothing patterns from the company's Great Neck offices to the factories, where rotational molds and a spray-painting process give characters their distinctive look.

Mego's exclusive rollout with Target expired on Jan. 1, and the company is ramping up distribution worldwide.

Some collectors preserve action figures untouched in the box, but others pose and play with their toys.

Inevitably, parts get broken and accessories get lost. Enter Paul "Dr. Mego" Clarke. He makes replacement parts from his Dr. Mego's Repros workshop in Farmingdale and sells them through the drmego.com website.

"In the Mego world, they just call me 'doc,'" said Clarke, who specializes in Mego body parts, but whose accessories also could be used with action figures from other manufacturers.

The rise of action figures and pop culture also has spawned conventions where fans get together, dress in costumes (known as "cosplay") and browse displays set up by vendors.

Frank Patz, a former "bad guy" professional wrestler in Mexico known as Pentagon and First Class, organizes a Long Island convention known as Eternalcon, at the Nassau Coliseum in June.

Patz also has his own action figure collection, including vintage G.I. Joes, that he estimates is worth "at least" tens of thousands of dollars.

"There are different types of collectors," Patz said. "Some collect for the monetary aspect. I'm a collector because I love it."

Adult collectors account for as much as a quarter of sales.