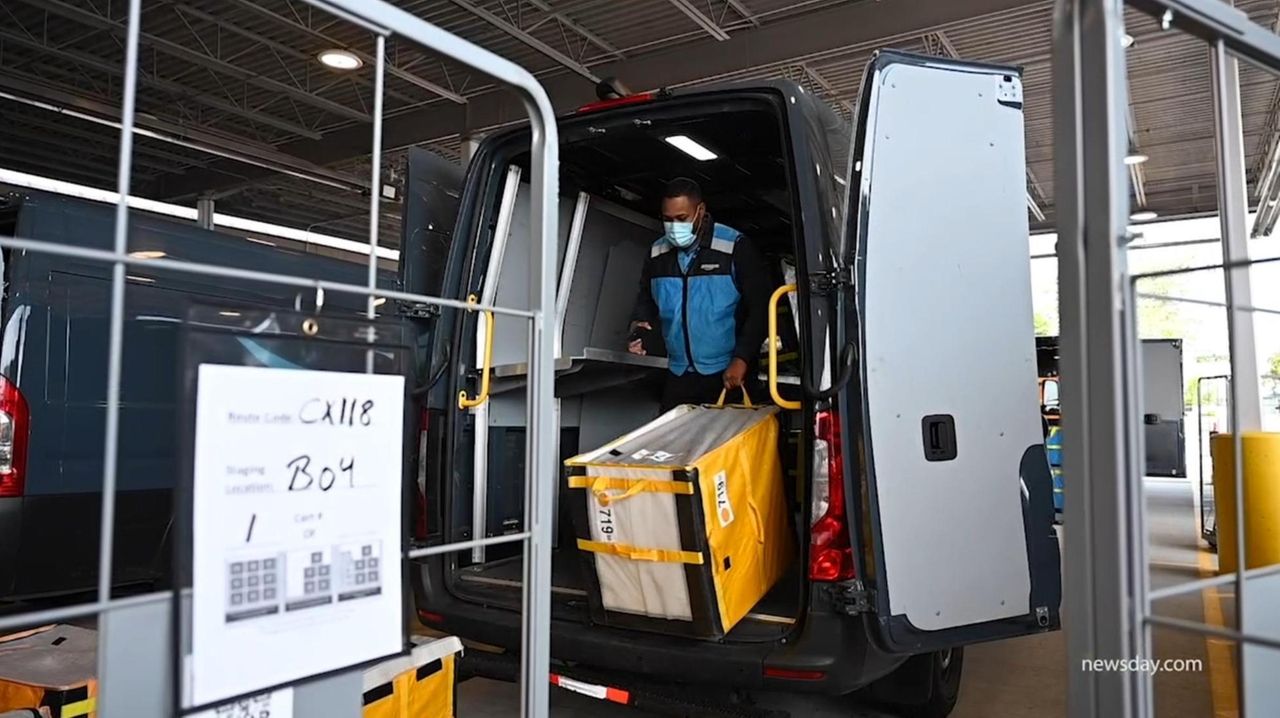 Amazon has opened a warehouse on the site of a closed grocery store in Carle Place to make "last-mile" deliveries to customers.

The 56,222-square-foot warehouse is the smallest of at least nine facilities that Amazon has opened or plans to open in Nassau and Suffolk counties. Each will operate year-round, 24 hours per day.

Previously, Amazon opened two last-mile warehouses in Bethpage and one in the Shirley-East Yaphank area.

"Each of these boxes has a customer, it’s important to them, and they need it on time," said Charlie Wodicka, an operations manager at the Carle Place warehouse on Westbury Avenue, a former Waldbaum's supermarket.

Amazon has more than 100 employees at the facility to sort 30,000 packages each day into delivery routes. The packages are picked up by more than 200 van drivers who bring them to doorsteps from Sands Point to Long Beach and Westbury to Queens Village, he said during a tour last Friday.

Wodicka said most of the packages arriving in tractor trailer trucks between 8 p.m. and 6 a.m. were assembled at a gigantic fulfillment center near Edison, New Jersey.

In Carle Place, packages are unloaded from trucks and sorted between 1 a.m. and noon.

Conveyor belts running the length of the warehouse send packages to sorting areas. After each package is scanned, the rack space where it should be placed lights up, said Wodicka, a Long Beach resident who joined Amazon in 2017 at one of the Bethpage warehouses.

Metal carts carrying oversized boxes and bags full of small packages are moved to spots near the van loading area for each delivery route. The vans are loaded in six 20-minute "waves" between 9:30 a.m. and noon. Each wave consists of 15 to 18 vans.

Among the warehouse's amenities are a "multi-faith room" for prayer and meditation, a room for expectant mothers, and machines that dispense free safety vests, gloves, hand sanitizer and electrolytes powder, said Derrick Luu, an onsite workplace health and safety specialist, adding that bottled water and candy bars are given to van drivers.

The Carle Place warehouse can accommodate vans powered by electricity; the company has set a goal of using 10,000 such vans by next year, said spokeswoman Jenna Hilzenrath.

Amazon has said it is opening warehouses to have more control over its business and meet customers’ demand for next-day and same-day delivery. It has more than 250 last-mile facilities across the country so far.

The company posted a profit of $21 billion last year, nearly double its 2019 earnings, in part because many brick-and-mortar stores were ordered to shut down in March 2020 to slow the coronavirus' spread.

The Carle Place warehouse has a shark as its logo while the one in Shirley-East Yaphank has an octopus. "We decided to go with a marine theme because we’re on Long Island," said Wodicka, who helped to open both facilities.

The warehouses are the last stop before an order reaches a customer's doorstep.