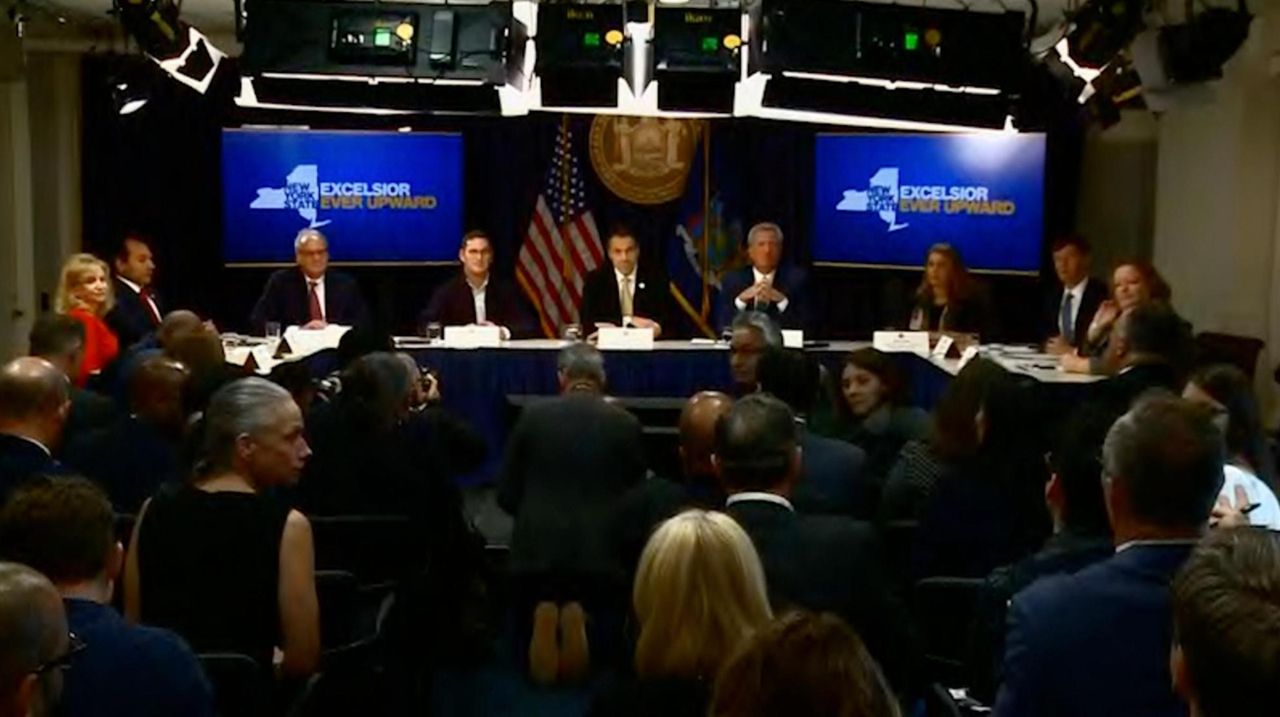 On Tuesday, Gov. Andrew M. Cuomo and New York City Mayor Bill de Blasio announced that Amazon will be expanding its operations to the East Coast and open a headquarters in Long Island City, Queens. Amazon said it would locate 25,000 jobs to Long Island City and it will receive $1.5 billion in tax breaks — the biggest incentive package in New York State history —  in return for creating the jobs. Credit: New York State

Internet giant Amazon, after more than a year of intense competition, said Tuesday it will build half its East Coast headquarters in Long Island City, Queens, promising 25,000 jobs and giving the region the opportunity to become a tech hub to rival Silicon Valley.

The decision, which the online giant said was driven by the region's talent pool and the transportation infrastructure in Queens, will generate jobs with an average salary of more than $150,000.

Amazon said it will invest $2.5 billion. In return, it will receive $2.8 billion in state and city aid. The $1.5 billion incentive package offered by the state is the biggest ever.

The online retailer also announced it would put a second East Coast headquarters in suburban Washington, D.C., with another 25,000 jobs. It had originally looked for a single location for 50,000 jobs. The company said it revised its plan because it could "recruit more top talent by being in two" regions.

How an Amazon move to Queens would affect LI

“These two locations will allow us to attract world-class talent that will help us to continue inventing for customers for years to come," Jeff Bezos, founder and CEO of Amazon, said in a statement. "We look forward to becoming an even bigger part of these communities.”

Amazon said it would start hiring for both offices in 2019.

Long Island officials are hoping the region's economy, real estate and job market will benefit from a spillover effect.

Meanwhile, New York City leaders are split on whether the state offered too much to win Amazon.

"New York can proudly say that we have attracted one of the largest, most competitive economic development investments in U.S. history,” Gov. Andrew M. Cuomo said in a statement. “With an average salary of $150,000 per year for the tens of thousands of new jobs Amazon is creating in Queens, economic opportunity and investment will flourish for the entire region."

Mayor Bill de Blasio added in a post on Twitter that New York is gaining "good paying jobs and Amazon is about to meet the most talented work force in the world in one of the most diverse places on the planet. Welcome to Queens."

Other elected officials are pushing back on the benefits package, arguing it's too friendly to the company and that it would displace middle-class New Yorkers.

“New Yorkers have real unmet needs from their government," State Sen. Michael Gianaris and New York City Councilman Jimmy Van Bramer, said in a statement. "We are witness to a cynical game in which Amazon duped New York into offering unprecedented amounts of tax dollars to one of the wealthiest companies on Earth for a promise of jobs that would represent less than 3 percent of the jobs typically created in our city over a 10-year period."

Some experts expressed caution about the financial aspect of Amazon's move. Credit rating agency Fitch Ratings said the new headquarters "would have at most a muted impact on the economies and credit qualities of Arlington County and New York City."

Even if New York had gotten the full 50,000-employee headquarters, it would have represented only about 0.5 percent of the metro area's workforce, Fitch said.

Moses Gates, vice president for housing and neighborhood planning at the Regional Plan Association, said "like other large economic developments, this doesn't take place in a vacuum. The questions being asked include what are we going to do with the infrastructure needs.

"Any time you bring jobs and economic activity, it's good for the region," Gates added.

But the impact won't be immediate because the workers wouldn't surge into the city all at once, and other areas, including neighboring New Jersey and Connecticut, would also absorb many of the newcomers.

The online retailer said last year it would choose a location for what it dubbed “HQ2.” The company received 238 proposals before narrowing the list to 20 in January.

Amazon spent at least $418,000 lobbying the New York State government from Jan. 1, 2016, through June 2018, according to records filed with the Joint Commission on Public Ethics.

The company has lobbied on a variety of issues, including sales tax on internet purchases, cloud computing, procurement rules and laws, as well as minority- and women-owned business legislation.

Read NY's benefits offering letter to Amazon Amazon has announced plans to locate part of its East Coast headquarters in Long Island City in Queens, bringing 25,000 jobs with it. New York State and New York City combined to offer a benefits package to entice Amazon to set up shop in the Big Apple. Amazon to get $2.8B in aid on $2.5B investmentExperts who study economic development incentives said the package from NYC and the state may be overly generous. Queens transit woes creak under HQ2's impending weightAmazon promised to invest in "infrastructure improvements" in its announcement of the Long Island City headquarters in Queens, but details were not clear. Reports: Amazon planning second HQ in QueensThe Seattle-based electronic commerce and cloud computing giant, which has been searching for a second base of operations, is finalizing plans to split its new hub between Long Island City, Queens, and Crystal City, Virginia, according to published reports.