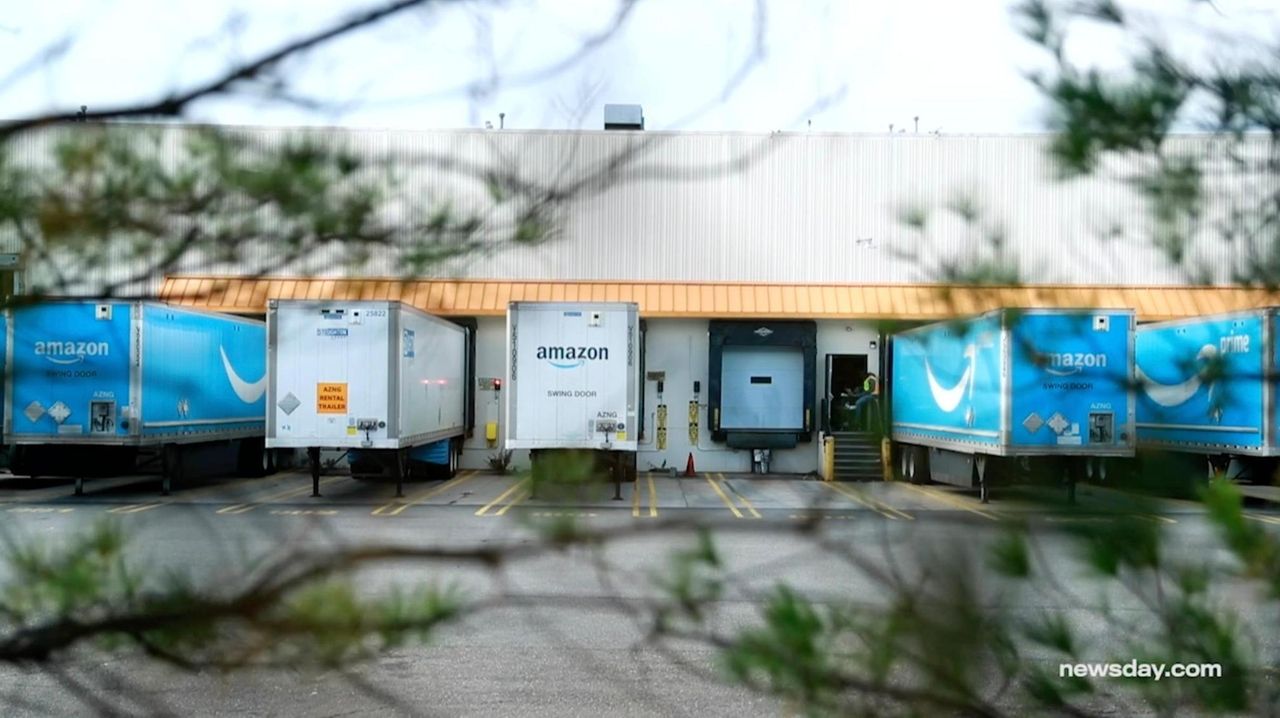 Retailers are adding last-mile warehouses on Long Island to speed up the process of getting packages to your doorstep. Richard Kessel, chairman of the Nassau County Industrial Development Agency, explains how these facilities could help the Island's economy.  Credit: Newsday / Raychel Brightman; Johnny Milano

Amazon, Home Depot and other big retailers are opening warehouses across Long Island, spurred by a coronavirus-fueled boom in online shopping.

Dotting the region with so-called "last-mile" warehouses means retailers can ensure that merchandise makes the last leg of its journey to customers' homes quickly, often in a matter of hours, not days.

Amazon has two warehouses in Bethpage and one in Shirley, with plans for additional locations in Carle Place, Syosset and Westhampton Beach. A Home Depot facility is going up in Hicksville, and Stop & Shop is adding a sixth "wareroom" at its Hempstead Village supermarket.

Together, the new and proposed warehouses will cover nearly 1 million square feet and employ more than 3,600 people, including delivery personnel. They will bring needed jobs as the brick-and-mortar portion of the retail industry fades.

"Long Island is fertile ground for these last-mile warehouses because Long Islanders increasingly find it convenient to shop at home rather than go out," said Richard Kessel, chairman of the Nassau County Industrial Development Agency. "With COVID, even more people are shopping online because they’re worried about catching the virus" when they walk into a store. "So, retailers must have warehouses closer to customers’ homes to better deliver the merchandise," he said.

The IDA awarded tax breaks to the Home Depot warehouse in July and is negotiating a tax deal for the Amazon warehouse proposed for the old Cerro Wire site in Syosset. Both deals have been criticized by county legislators and homeowners, who say the behemoth retailers can afford to pay full taxes.

Kessel and other economic developers said last-mile warehouses, and the delivery companies tied to them, are a new industry for Long Island – similar to television and movie production, which blossomed in the past decade at two studios in Bethpage. Nearly 39,000 people were employed locally in the warehousing and transportation sector last year, according to the state Department of Labor.

"In the next five years, we could see thousands of new jobs created out of these last-mile facilities. That means work and right now, people need work," said Kessel, citing the coronavirus-induced recession.

At Amazon’s Shirley warehouse, some of the 140 new hires were people who had lost other jobs in the spring when nonessential businesses were shut down to slow the virus’ spread.

Crystal A. Anthony had been a sales clerk for about five months at the Forever 21 clothing store in the Queens Center mall when the lockdown threw her out of work. The retailer filed for bankruptcy last year — just like Anthony’s previous employer, Payless ShoeSource, where she also was laid off.

She said she has used some of her wages to reduce credit card debt, which has improved her credit score. That will help her move out of the family home in Jamaica, Queens and into an apartment and replace her 2005 Toyota Camry, she said.

After three weeks on the overnight shift, Anthony was promoted to "learning ambassador," a job that entails helping new hires acclimate. She said she hopes to run a warehouse in two years and eventually represent Amazon as an attorney.

"A door has opened for me that I don’t see closing," said Anthony, who will receive a bachelor’s degree from CUNY’s John Jay College of Criminal Justice next month and enter law school in fall 2021. "The sky’s the limit."

Retailers pay last-mile warehouse employees around $15 per hour and managers earn about $60,000 per year, based on three applications for tax breaks from warehouse developers.

The warehouses operate around the clock, 365 days a year.

Amazon facilities adhere to a precise schedule: Packages arrive via tractor-trailer trucks and are sorted by delivery routes between 10 p.m. and 7 a.m. The packages are loaded into delivery vans every 20 to 30 minutes, starting after 9 a.m., and the last driver begins their route by 1 p.m. The empty vans return to the parking lot between 7 and 9 p.m., according to Brad Griggs, the retailer’s senior economic development manager.

"There are many waves of delivery vans" to be loaded with packages daily at an Amazon last-mile warehouse, he said, adding that hundreds of vans are used depending on the facility’s size and package volume. "Deliveries are made over 10 hours to homes within a 45-minute radius of the warehouse."

Once the vans have departed, Griggs said, independent contractors start arriving at 3 p.m. to pick up parcels for same-day delivery. These "flex drivers" use their own vehicles and are paid $22 to $25 per hour.

Amazon is "very much in the process of expanding our delivery network…We’ve opened 150 delivery stations over the past few years," Griggs said, referring to last-mile warehouses.

Proposals for warehouses near population centers are numerous because of a spike in internet purchases during the COVID-19 pandemic, plus increased demand for same-day and next-day delivery.

Nationwide, online sales rose 37% to $201 billion during the virus’ first wave in the April-June period compared with January-March. Web purchases accounted for 15% of U.S. retail sales in the spring, up 3.6 percentage points from the winter, Census Bureau data show.

The number of consumers saying they will make at least half their holiday gift purchases over the internet has risen 10 percentage points to 52% compared with 2019, according to the Conference Board, a business research organization in Manhattan.

"COVID forced many customers into an environment where purchasing online and having products delivered to the home was the safest, most convenient thing to do," said Ann-Marie Daugherty, a supply chain expert at Inmar Intelligence, a retail industry analytics company in Winston-Salem, North Carolina. "The amount of shopping that’s happening online is going to continue to increase. So, the need for retailers to have warehouses closest to the consumer will be even more important," she said.

Daugherty and others said prompt delivery can help one chain stand out from another. But retailers in densely-populated regions, like Long Island, face the challenge of less space for last-mile warehouses. They are forced to determine what types of merchandise will be in high demand and hope they have enough on hand.

Consumer expectations for rapid delivery led Home Depot to decide to open its first last-mile warehouse in Nassau and Suffolk counties. The home improvement retailer will rent the 195,610-square-foot building, which is under construction in Hicksville.

"We have a really strong business on Long Island and we need to be able to deliver appliances in a very fast and very economic fashion there," said Kyle Dennis, vice president of supply chain development at Home Depot, adding the Hicksville warehouse will eventually handle "other large, bulky items" besides appliances. The retailer has 23 local stores.

"Our goal is to offer same-day and next-day delivery to 90% of the U.S. population" from more than 150 last-mile warehouses, he said. "We want to build a network that we can adjust as customer preferences and needs change, and we’re clearly seeing that play out right now" with the pandemic.

The Home Depot warehouse and the three planned by Amazon are to be built by developers and rented to the retailers under long-term leases. The Stop & Shop warehouse will be affixed to an existing store.

Stop & Shop already has last-mile "warerooms" attached to five of its 51 supermarkets in Nassau and Suffolk. The facilities, each about 9,000 square feet, employ more than 700 people to support Stop & Shop Delivery, formerly called Peapod.

"As a result of COVID, we’ve seen a surge in demand for online grocery shopping," said spokeswoman Stefanie Shuman. "Conveniences such as Stop & Shop Pickup [where customers retrieve orders at the store’s curbside] and Stop & Shop Delivery will remain a focal point for our business."

Target Corp. uses space in the back of its stores, including 18 on Long Island, to fill online orders.

The "stores as hubs" fulfillment strategy began in 2017 and now about 80% of target.com purchases are processed by store employees. Shipping packages from the store is 40% cheaper than from a warehouse, and curbside pickup by the customer is 90% cheaper than home delivery, executives said.

Retailers on the Island may be forced to reconfigure part of their selling floor into last-mile warehouse space because land is scarce for new construction and the vacancy rate for existing space suitable for warehouse operations is less than 2%, according to the commercial real estate firm Cushman & Wakefield.

David Pennetta, Cushman & Wakefield’s Melville-based executive managing director, said shuttered stores in neighborhood shopping centers could become warehouses if zoning laws were changed and residents’ concerns about traffic and noise were addressed. The vacancy rate is 7.7% for these shopping centers, he said.

"The closed Century 21 department store in Westbury, Waldbaum’s, Kmart and other big-box retailers that have gone out of business – all could become last-mile warehouses, but the problem is zoning," said Pennetta, a member of the Huntington Town Planning Board. "There’s opportunity but also barriers."

Amazon's new warehouses involve a former Waldbaum’s grocery store in Carle Place, a vacant factory in Shirley and soon-to-be-constructed buildings in Syosset and Westhampton Beach. Company executives, responding to concerns voiced by Carle Place and Syosset residents at government meetings, have promised tractor-trailer trucks will not use narrow residential streets to enter and leave the last-mile warehouses.

Just In Time Logistics, a delivery company started in October 2018 to serve Amazon in Bethpage, would like to serve one of the new warehouses as well.

"I definitely want to branch out, to be in more locations and to have a larger team," said Avi Mordekovich, who has grown the Hicksville company from five vans and 10 employees to 50 vans and more than 100 employees.

He started Just In Time a few months after retiring from an automobile repair shop in Long Beach, which he co-owned, and two others that he managed. By chance, he learned of Amazon’s training program for entrepreneurs who want to become parcel carriers. He took the two-week training course and 24 days later was delivering packages.

"I had a lot of butterflies because we started in the busy season," recalled Mordekovich, 59, of East Rockaway. "I had absolutely no clue about the logistics business. So, there was a lot of on-the-job training, but every day we got a little better."

He said having Amazon as a partner improves the odds of success. Entrepreneurs need only invest $10,000 to start a delivery business, with the retailer providing contacts for van leases, uniforms, insurance, vehicle maintenance and hiring websites.

"The name Amazon was a tremendous draw for me," said Mordekovich, recalling why he enrolled in the training program. "I felt like I can’t go wrong working with such a company."