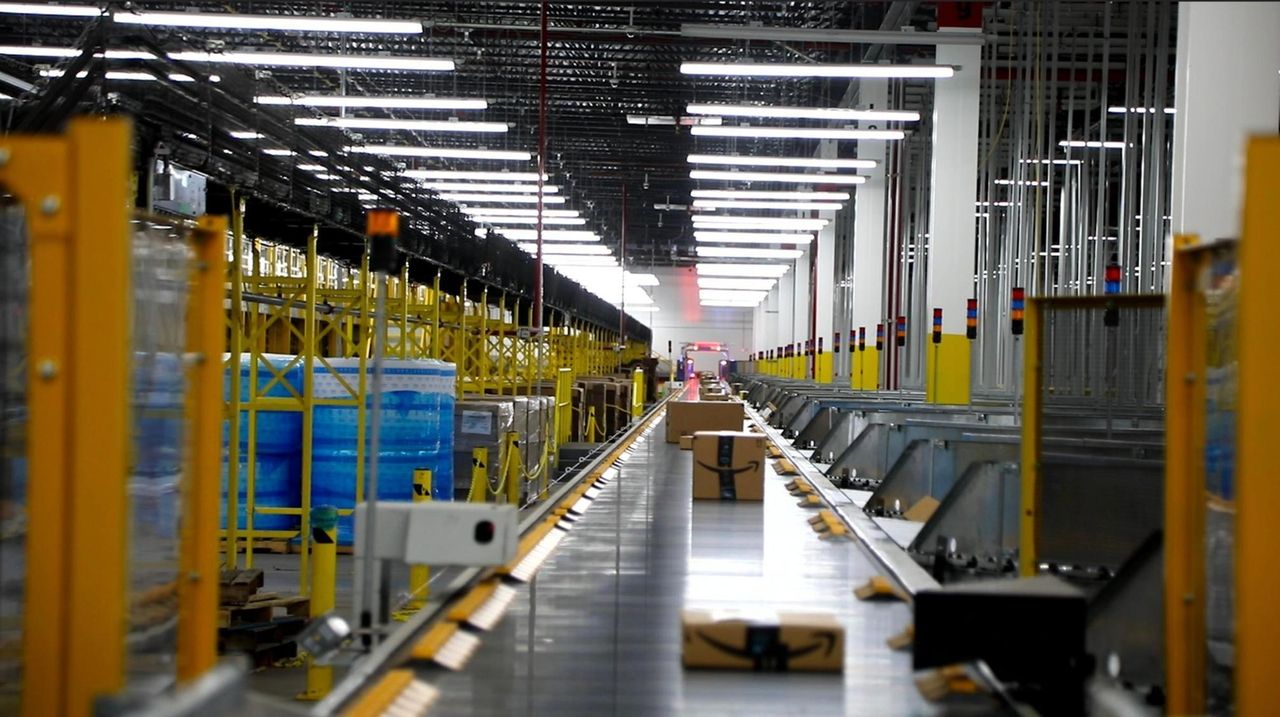 In October, Newsday was given a tour of Amazon's JFK8 fulfillment center in Staten Island. It contains 855,000 square feet on the ground level where about 4,500 full-time employees work, about 200 of them from Long Island. Credit: Newsday / Shelby Knowles

Amazon's JFK8 fulfillment center in Staten Island -- the retail giant's first and only in New York -- sprawls across 855,000 square feet, an area roughly the size of 15 football fields.

Inside the four-story building, bright LED lights line the high ceilings above more than 10 miles of conveyor belts and rollers, almost constantly in motion, transporting plastic bins filled with hundreds of thousands of products "upstream" and "downstream."

Hundreds of robots guided by electronic eyes push shelves filled with merchandise around the floor as employees scan and store items and then pick and pack customers' orders.

The center operates 22 hours a day "give or take," general manager Chris Colvin said during an exclusive behind-the-scenes tour for Newsday this fall. It has more than 4,500 full-time employees, about 200 of them from Long Island.

The center, which opened in September 2018, can handle up to 1 million packages a day, said Colvin, a West Point graduate and Army veteran.

While the holiday shopping season is a busy time at the fulfillment center, Colvin said he's not hiring seasonal workers.

"It's always Christmas in New York," he said. "It's the city that never sleeps. ... There's significant demand all year-round, so we see high volumes all the time."

Last week, Amazon announced plans to locate 1,500 employees from its consumer and advertisement teams in new offices near the Hudson Yards complex on Manhattan's West Side. The Seattle-based company already has 3,500 employees in other New York offices.

On Long Island, Amazon operates an  Amazon Fresh warehouse in Bethpage that primarily handles delivery of groceries to local customers.

In February, Amazon abruptly pulled out of a deal to build a $2.5 billion office complex in Long Island City, Queens. Plans for that project, estimated to bring 25,000 new jobs to the area over 15 years, were canceled after facing fierce opposition from activists and politicians, among them New York State Sen. Michael Gianaris and U.S. Rep. Alexandria Ocasio-Cortez, who objected to nearly $3 billion in incentives they believed the company did not deserve.

The e-commerce and cloud storage company, which had $230 billion in revenue last year, has seen explosive growth since Jeff Bezos founded it 25 years ago as an online bookstore out of his garage. More than 100 million people worldwide are members of its Prime subscription delivery service.

Amazon, which has long been criticized as a killer of small businesses, has also faced backlash for its workplace practices. About two weeks ago, more than 100 workers and their supporters gathered outside the Staten Island plant to protest working conditions and petition for longer work breaks.

In an article in the New York Post last month, Maureen Donnelly, a former JFK8 employee, detailed the "horrors" of working at Amazon, which she said included having to inform a manager that she was going to the bathroom and struggling to meet "projections." "I had to stock at least 12 items a minute," she said.

When asked about quotas, Amazon spokeswoman Rachael Lighty said, "There are employee performance goals, but they're measured over a long period of time."

What about daily quotas? "Every day is different. ... It all depends on consumer demand," she said.

Jing Zhang, an "Amazonian" who lives in Uniondale, said the benefits make his 55-minute Belt Parkway commute to the facility worth it.

Employees work four-day weeks, typically putting in 10-hour shifts, Colvin said. They take one 30-minute break and two 15-minute ones, he said, and "can take short breaks if they need to at any time during the day."

He started the tour by showing off the "stow" station, where incoming merchandise is processed. There, small robots move hundreds of yellow, tiered shelves called "pods," each over 6 feet tall, around a fenced-in area as "stowers" like Nytasha Braddy fill them with merchandise.

Braddy's job is to scan the thousands of items, from toys to toiletries, that come into the building on trucks every day and store them in the pods, where the products remain until customers order them.

A team of employees across the company determines which inventory goes to JFK8 and to each of Amazon's more than 175 fulfillment centers around the world, said Lighty, who led the tour along with Colvin.

JFK8 -- named for John F. Kennedy International Airport, one of the airports closest to the center -- primarily serves the New York metro area and parts of New Jersey, Connecticut and Pennsylvania. The two closest centers, LGA9 and EWR9, are in New Jersey, which is home to 10 fulfillment centers. Amazon Prime-eligible products can be on a Long Island customer's doorstep in  two days or less, no matter where they're warehoused, Lighty said.

Braddy grabs each individual product, scans it into the system and places it in a pod.

"Once I put it in the pod, it becomes available on the internet so customers can buy it," she said.

When one pod is filled, Braddy sends it away with a few taps on a laptop screen and summons another one. The pods move around the floor, pushed to computer-programmed locations by orange "robotic drives."

Think of it this way: Instead of a worker walking up to a shelf, the shelf, or pod, is brought to the worker by a robot.

"The drives move in between thousands of these pods, moving millions of products around the fulfillment center every single day," Lighty said. The robotic drives "work off of artificial intelligence and have sensors in front and in back, as well as cameras, so they know exactly where they are on the robotics floor and they know where every single item in the fulfillment center is."

The floor the drives travel on is lined with postage-stamp-sized QR codes, scanned by their "electronic eyes" for guidance when transporting pods to and from employees.

Unlike in traditional warehouses, which group items by category, Amazon groups them by size -- a practice the company says is more efficient -- and keeps track of what's where through its computer system.

This means that products, toothbrushes for example, are randomly spread across different pods. This way when a toothbrush is ordered, the likelihood of it being close to a "picker" -- a worker pulling items for a particular customer order --  is increased.

When a customer places an order, a computer algorithm locates the item and -- within a matter of seconds -- sends the information to the appropriate fulfillment center. There, a robotic drive fetches the pod, bringing it to the closest picker. When it arrives at the picker's station, the computer instructs the picker which item to select and where on the pod it's found.

JFK8 handles only items that are 18 inches or smaller.  If you order a larger item, such as a television, patio furniture, a bicycle or a kayak, it will come from a different facility.

Both the robotic drives and the pods are kept in an enclosed area, behind a locked fence. Braddy has access to the pod she's filling through an opening in the fence at her workstation, where the drive parks the pod when she calls for it. For safety reasons, only specially trained robotics technicians are allowed to work inside the fence.

Stand up & pick out

"This is what we call our 'stand up' area," Colvin said of an open space in between the stowing and picking station. "We start every shift here. It's where we do stretches together, go over safety tips, make announcements and discuss the game plan for the day."

A colorful, spin-and-win wheel in the corner of the room "is a fun, team-building thing for our employees," he said. "Sometimes we have cool activities here and [workers will] get to give it a whirl and win a prize."

Possible prizes include free lunch, a free snack, an extra 30-minute break and a $10 Visa gift card, as well as consolation prizes: a high-five from your boss or the chance to "bust a dance move" in front of your co-workers.

At the next station, picking, employee Nicholas Vignapiano's job is to pick items ordered by customers out of the pods, scan their barcodes, place them in yellow bins, and push them "downstream" to the first floor on a conveyor belt, where other employees will receive and pack them.

Vignapiano's movements are constant and efficient, every step accounted for.

In the packing department, Michael Waterman looks at a computer screen, grabs items out of bins, scans their barcodes, selects boxes of different sizes, places the products inside, grabs and sticks on tape, and sends the boxes down the line to shipping on a conveyor belt, over and over and at top speed. It's impressive.

He's clearly in the zone, focused and on top of it. He makes it look easy, almost like a dance.

"Make no mistake...it's not so easy," said Colvin. "We had an Amazon higher-up, who came in here and tried his hand at some of the jobs. He ended up making some mistakes and then wound up walking all the way to the other side of the building to try to fix them ... yeah, it was pretty funny, kind of like 'Undercover Boss.' "

Final stop: shipping. Here, there are no humans. Just machines.

"It's completely possible for some of our employees who order from Amazon to have some involvement in getting their own packages ready to go out the door and never even know it," Colvin said.

Boxes are then scanned by a red light at the "shipping sorter," where small, triangular "shoe sorters" divert them down ramps that lead to the loading docks of different trucks, depending on the package's destination.

Once the truck is fully loaded, Colvin said, "The items can go on their way, home to you."