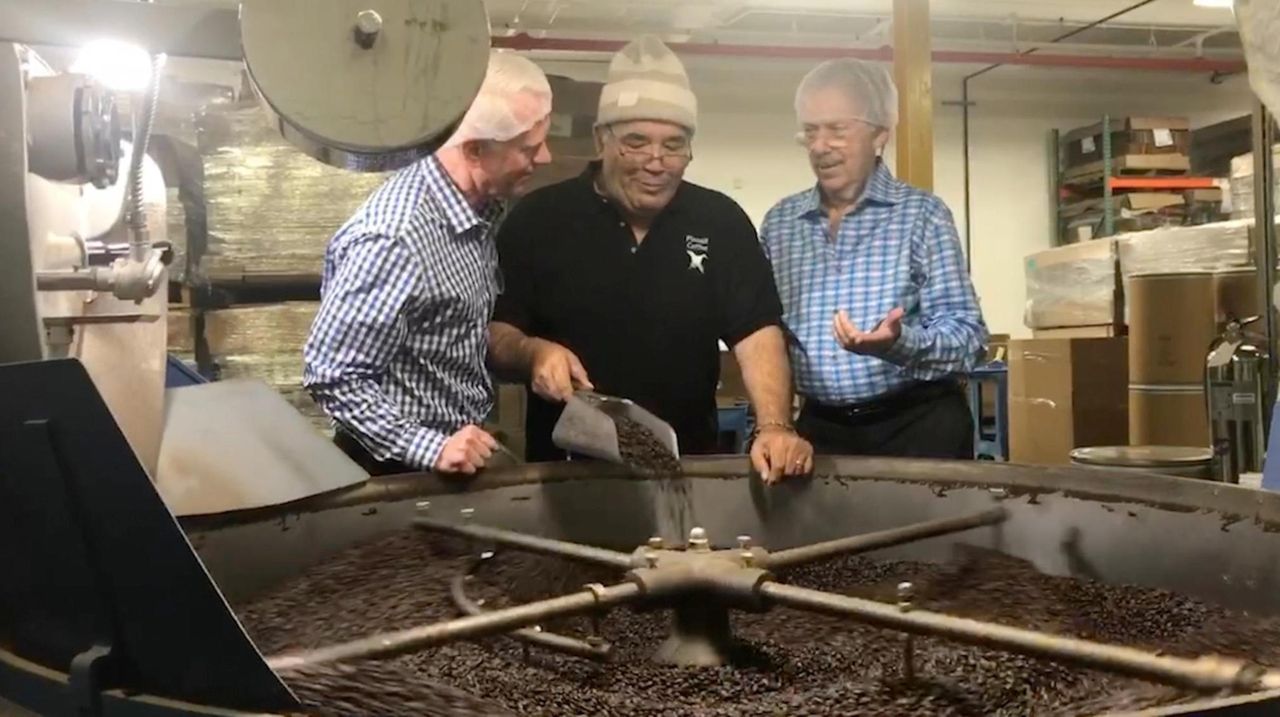 Pintail Coffee is a company that roasts coffee beans and sells ground coffee online through its website, as well as on Amazon as a third-party seller.  Credit: Newsday / Alejandra Villa-Loarca, Daysi Calavia-Robertson

Amazon has been criticized as a killer of small businesses, but many Long Island entrepreneurs are thriving because of the online retail giant.

Through Amazon's Marketplace, these business owners, known as "third-party sellers," partner with Amazon to list and sell products on amazon.com. They can fulfill orders themselves, or pay Amazon to do it.

"Amazon has the buyers and makes it very easy for me to reach them," said Lake Success entrepreneur Liran Hirschkorn, who sells two very different product lines — fuzzy animal onesies and etched whiskey decanters — on Amazon.

"There's this perception that Amazon is this big, bad wolf, but the truth is there are so many people building wildly successful businesses because of this Amazon opportunity," he said. "Selling on Amazon has completely changed my life."

Of course, access to Amazon's buyers comes at a price.

Sellers pay Amazon per-sale "referral" fees with percentages varying by category. Referral fees for clothing and accessories are 17 percent, for example, while fees in home and kitchen are 15 percent.

Fulfillment fees the seller pays to ship products to consumers vary from 25 to 35 percent depending on the item's size and weight.

Fees aside, for many local entrepreneurs the ability to establish a company presence on Amazon's Marketplace has given them an opportunity to grow their businesses and sell their wares way beyond Long Island's shores.

Hirschkorn, who recently launched a weekly podcast called "The Amazon Seller" and also runs Amazing Freedom, a consulting business to help others sell on Amazon, started selling one-piece animal suits, which can be worn by children or adults as costumes, loungewear or pajamas, on Amazon in 2015. He named the line of onesies, which are made in China, Emolly Fashions, after his daughter.

In 2016, he opened Royal Decanters, a second "store" or page on Amazon.com, which sells themed whiskey decanters, including a rectangular decanter that features a glass-blown full-rigged ship inside and another etched with a map of the world.

Amazon accounts for about 95 percent of his two companies' sales, Hirschkorn said. The businesses posted a combined $2.2 million in sales in 2018, he said, and he projects 2019 sales will near $3 million.

Hirschkorn is in good company.

More than half of all units sold on Amazon worldwide were from its Marketplace third-party sellers, Amazon CEO Jeff Bezos reported in an April letter to shareholders.

"Just think about that for a second," said Hirschkorn. "There's about 100 million Prime members worldwide, and the only way to reach them is through Amazon...Sometimes you just have to play in someone else's playground."

But not all sellers are game.

Some entrepreneurs say they're uncomfortable giving Amazon so much control over their livelihoods. They cite high fees, an inability to connect directly with buyers, pressure to uphold high customer satisfaction ratings, and worries over being shut down by Amazon at any given moment as challenges to third-party selling.

Nicole Larrauri, president of EGC Group, a marketing and digital services firm in Melville and Manhattan that two years ago launched a dedicated Amazon Marketing Services Division, said, like it or not, entrepreneurs must get on board with Amazon or get left behind.

"The reality is, that's where the people are. That's where they're buying. The platform is not going away, it's only going to grow," she said.

"And if you're someone who's in the business of selling things, you have to think of Amazon and what you can do to exist, survive and thrive there."

That's exactly what many third-party sellers are doing, an Amazon spokeswoman said.

Since the retailer opened its platform to third-party sellers – primarily small and medium-sized businesses –  in 2000, these sellers "have been an integral part of Amazon's DNA," she said. "Third-party sellers represent 58 percent of physical gross merchandise sales ... and are continuing to grow nearly twice as fast as Amazon's own sales."

However, navigating Amazon as a third-party seller can get complicated. That complexity itself has resulted in a business opportunity, as attorneys find work helping entrepreneurs deal with unexpected hiccups of selling on the platform and consultants teach sellers how to make the most of their Amazon stores and get more eyes on their listings.

Newsday spoke to small business owners to get the good, the bad and the ugly of Amazon third-party selling. Here’s what they had to say:

The Good: 'Who hasn't heard of Amazon?'

Kace Martin of Bellmore started selling her handmade bachelorette, wedding and baby shower note cards, along with custom kitchen towels, glassware and other home goods, as a third-party seller in Amazon's Handmade category four years ago.

Her passion for crafting led her to start her stationery business, Designing Moments, in 2012. Soon after, she established a presence on Etsy, a popular e-commerce site that focuses on handmade products.

"Etsy is great, but there are still so many people who don't know what it is and have never heard of it," said Martin.

"Who hasn't heard of Amazon? ...That's the difference, and the sales reflect it. Everyone is there, so I knew I needed to be there also."

Martin said she sells about 300 products a week on Amazon, "four times as much" as on Etsy, with sales continuing to grow.

"My income increased significantly once my Amazon store took off," Martin said recently in her home workstation, as she hot-pressed a white kitchen towel with an orange decal that read "Pumpkin Spice & Everything Nice."

Cards made by Martin sell on her Amazon Handmade store for $8. Kitchen towels are priced at $15.

Martin, who uses Amazon's fulfillment service, was busy readying about 500 kitchen towels of different designs to ship to Amazon ahead of the approaching holiday season, one of her busiest times of year.

As she worked, her 3-year-old son, Connor, played with a toy car at her feet.

"At first it wasn't moving too quickly," said Martin of her Amazon store. "It took about a year of work, making sure to have the best product art, to use enough key words in product descriptions, get positive reviews."

The more people search for words in your product descriptions, click on your items, buy and leave positive reviews, the higher a seller's ranking rises, she explained.

"You become more relevant to shoppers," Martin said. "Your product is seen more, bought more and that's when you can start making money."

For Martin —  a mother of three — being able to grow her business on Amazon's Marketplace has been "a godsend."

"Without this website, I couldn't stay home with my kids," she said. "And I wouldn't be making any money."

Pintail Coffee, a Farmingdale maker of ground coffee and single-serve coffee pods, opened its Amazon third-party selling account about a year ago in hopes of widening the brand's reach and boosting the company's sales.

That has happened, Pintail Coffee vice president Stuart Kessler said, but between fulfillment and storage fees, shipping charges and the cost of advertising on the platform, the company almost never sees a profit.

"We are lucky if we see any earnings at all after all the fees and charges are applied," he said.

"We find it hard as a small business to support and maintain an [Amazon] account. The only reason it's valuable for us is for the product exposure and brand awareness it provides. Otherwise, it's pretty prohibitive."

For companies selling products with relatively low markups, it often doesn't make sense to sell on Amazon since the e-commerce site takes a cut anywhere from 15 to 20 percent of the sale price in addition to listing and other fees, experts said.

Pintail, which produces about 14 million single-serve coffee pods a year, is "growing by leaps and bounds" through retail accounts in supermarkets, Kessler said.

"Our products are also available on Bed Bath & Beyond's website," he said. "But we can't ignore the Amazon component. It's a great thing for marketing. We need to be there."

Though Amazon accounts for only 5 to 7 percent of Pintail's sales, the company has designated two employees to manage its Amazon account.

For Martin, of Designing Moments, one of the biggest downsides to being a third-party seller is "the realization that the customers are not actually yours, they're Amazon's," she said.

"Customer loyalty is not to you and tracking returning customers is difficult because you can't communicate with them directly. You don't have access to their emails or phone numbers or any customer data."

In an effort to build their own clientele, some third-party sellers insert flyers encouraging customers to register on their company websites inside product packaging, but Martin said she refrains from doing so in fear that Amazon might frown upon the practice and shut down her account.

"I wouldn't be able to afford that, so I just play by the rules," she said.

The Ugly: Seller suspension or "Poof, you're gone!"

Marc Frankel, of Huntington Station, owner of Long Island Watch, an online specialty watch store, sold watches as a third-party seller on Amazon for more than a decade, beginning in 2004.

Over the years, Frankel uploaded his entire catalog to Amazon, often winning the "Buy Box," the site's recommendation to shoppers of what it perceives to be the best value product in that category.

Competition among sellers to obtain this valuable real estate — 82 percent of Amazon sales go through the buy box, which highlights one seller's product over the same or similar items sold by others — is stiff, and only those with excellent seller metrics, including pricing, stand a chance of getting it.

"At first, it was easy to win because competition was low, but as [Amazon] onboarded more people, it became harder," Frankel said. "You can have 50 sellers selling the same watch and my $99 listing, compared to a lowball $69 one, made getting the 'buy box' unattainable."

Trying to secure the buy box in hopes of increased sales becomes a race to the bottom, he said. "You can win the buy box and lose all your profits."

Even so, Frankel's Amazon business was flourishing, with about 35 percent of his revenue stream driven by the platform.

"When I realized this, I freaked out a little bit because I knew a switch could be flipped at any moment, and I could lose all that revenue just like that," Frankel said.

"I stopped being competitive on price and started growing sales on my website," he said. "It was my way of weaning off of it. I became an entrepreneur to steer my own boat, but when you have Amazon as a partner, you're not steering your own boat. They're steering the boat and you're rowing as fast as you can."

About a year and a half ago, in a span of one month he received three negative reviews for late shipments he said were outside his control. Amazon shut down his account.

Poor reviews, late shipments and other performance defects result in warnings and account deactivation if left unaddressed, an Amazon spokeswoman said. Amazon calls sellers who show signs of underperformance and provides them with an opportunity to demonstrate they’ve resolved the issues prior to account deactivation, she said.

"I know I could've filled out an appeals form, but you know what?" Frankel said. "I said, 'I think I'm done,' which sounds crazy because it's a tremendous selling platform, but I found it best to just walk away."