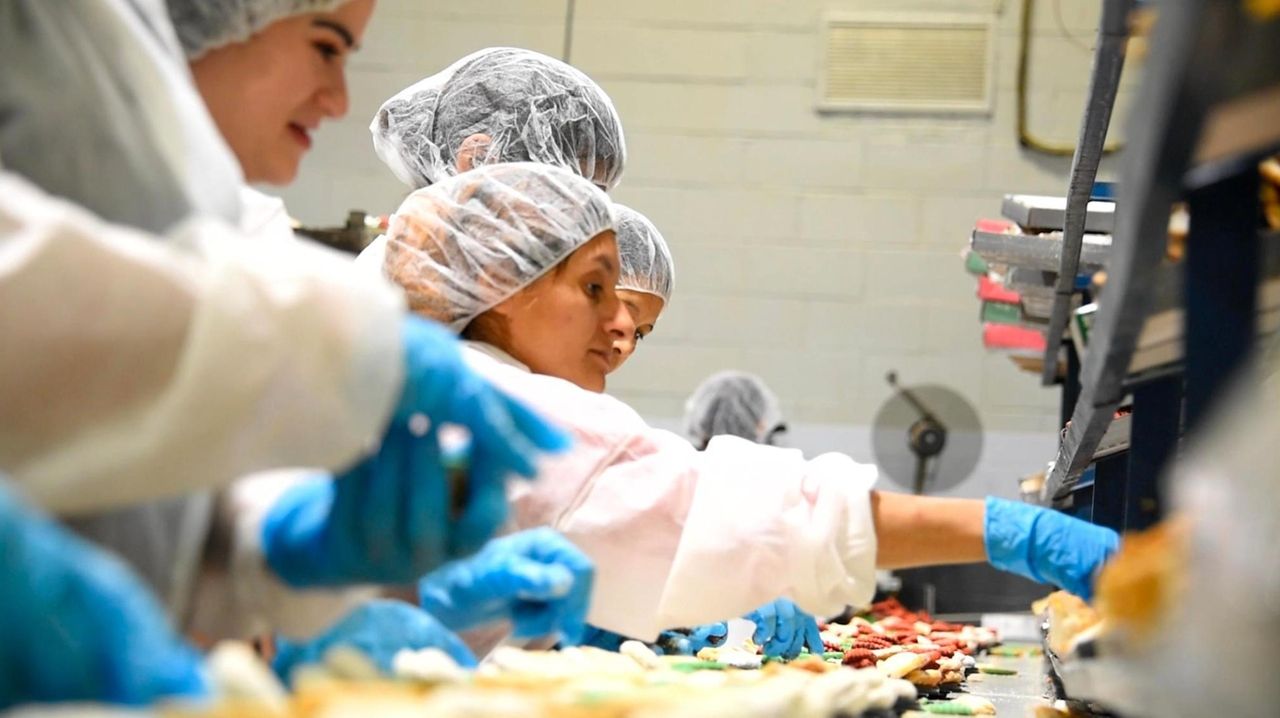 Wholesale bakeries turning out everything from bagels to tortillas employ more than 3,500 people in Nassau and Suffolk counties, making them the fourth-largest player in manufacturing, Census data show. Aerospace parts factories have dropped to No. 7, with about 2,500 employees.

The rise of bakeries, along with other non-military producers, is tied to deep cuts in defense spending after the Cold War and an exodus of local businesses from a variety of sectors to less expensive regions, experts said. Aerospace giant Northrop Grumman Corp. has fewer than 350 workers here, compared with Grumman Corp.'s 25,000 in 1986.

“Long Island’s manufacturing sector continues to shift," said Rosalie Drago, regional director of the Workforce Development Institute, a nonprofit that helps manufacturers recruit and train employees. "Segments ebb and flow with the demand for products and ownership changes at companies” that sometimes lead to layoffs or businesses leaving the Island, she said.

Bakeries have become a more important source of jobs as overall manufacturing employment on Long Island has declined. In 1990, 165,900 people worked in factories, according to census data. Last year, that number dropped to 76,000.

“We’re a foodie culture here, and the growth of bakeries is a natural extension of that," Drago said. "There are established bakeries and startups in the [business] incubators…There’s a lot of variety."

Still, baking employment isn't likely to grow significantly because of the region's high taxes and the costs of labor, electricity and transportation, the experts said. Some executives said they are considering robots and other types of automation to limit their rising expenses.

Workers in the baking industry earn less than half the pay of aerospace workers, on average: $44,500 per year compared with $97,180, census data show.

Getting hired, however, is easier because entry-level positions at most bakeries call for physical stamina and dexterity, the ability to work flexible hours, and adherence to federal food safety standards — but no college degree or license to operate machinery.

Patrick Boyle, executive director of the manufacturers’ group Ignite Long Island, said: “There are less restrictions for people to come into commercial baking, and you can move up.”

That’s what José Elmer Argueta has done. In the past dozen years, he's gone from seasonal work at a pool company to overseeing product quality on a bakery floor that's almost two football fields long.

Argueta started at United Baking Inc. in 2006, putting packages of muffins in boxes and onto pallets. Then he moved to mixing ingredients and filling in for vacationing quality inspectors at the Shirley-based business.

“I always say ‘Yes’ when an opportunity comes up,” said Argueta, 30, of Patchogue.

His career path has allowed Argueta and his wife to start a family, pursue homeownership and help his two brothers in El Salvador attend college. “Having this job has made a lot of my dreams come true,” he said.

When Argueta walks into a local deli or convenience store on his days off and sees Cookies United’s line of snack cakes, called CakeBites, on the shelves, he checks that the sell-by-date hasn’t passed and straightens the packages if they are in disarray. “I feel proud when I see the finished product in stores," he said. "I want the customers to receive the best quality.”

CakeBites debuted three years ago and has helped transform Cookies United from a business in financial distress to one with double-digit sales growth, executives said. Since 2014, the company has added 60 people to its payroll, bringing the total to 185.

Others include Tate's Bake Shop in Westhampton Beach with 450 employees, Wenner Bakery in Ronkonkoma with 260, Love & Quiches Gourmet in Freeport with 250, Modern Italian Bakery in Oakdale with 170 and Glenn Wayne Bakery in Bohemia with 135.

Besides snack cakes, Cookies United turns out cookies and gingerbread houses for grocery stores and other retailers nationwide who put their brand names on them.

The company, founded in 1965 as Silver Lake Cookie Co. Inc., was in danger of closing before United Baking purchased it five years ago, executives said. The new owner promised to invest $30 million, state records show.

CakeBites have three cake layers separated by jelly or flavored cream, with a coating of chocolate or icing and a topping of sprinkles or streusel crumbs, depending on the variety. Marketing director Michael Strauss said Italian Rainbow is the top-selling flavor.

He said the company produces more than 500,000 CakeBites per day.

Cookies United is committed to manufacturing CakeBites and its other baked goods on Long Island, he said, though the cost of doing business here is higher than in New Jersey and in the South and Midwest.

Galeano pointed to the 2016 law raising New York State's minimum wage to $15 per hour by 2021 as the firm's biggest challenge. "In the bakery business, we count our pennies. Labor costs are so much higher in New York, and that puts us at a significant disadvantage with competitors from other states,” he said.

The high cost of labor, energy and trucking led Long Island's most famous baking business, Entenmann’s, to shut down its giant Bay Shore plant in 2014 after nearly a century of production. The move came after the iconic company was sold by its founding family in 1978 and a succession of conglomerates gradually reduced the local workforce, which numbered more than 1,500 in the 1990s.

“The bakery was closed because it can no longer effectively compete in the market,” a spokesman for Entenmann’s parent, Bimbo Bakeries USA, said at the time. Company executives declined to comment for this article.

Entenmann’s rise and fall on Long Island is a cautionary tale for politicians and developers who hope the bakery sector will employ significantly more people, said Michael Tucker, president of the Long Island Food Council, a 120-member trade group.

“Baking is growing, but will these companies stay here as they get bigger?” he said. “I don’t believe they will. When you get to a certain level, it doesn’t make sense,” he said.

Tucker, who works with food manufacturers as a commercial real estate broker, said a company’s local operations are often on the chopping block if ownership passes from a Long Islander to a conglomerate or investment fund.

“The company stays here if the owners live here,” he said. “When a company is sold to someone from outside of Long Island, you no longer have an owner with a passion to be here. You have people who don’t look at anything but the numbers.”

Three of the region's largest bakeries -- Tate's, Wenner and Love & Quiches -- were sold recently to corporations and investment funds with few ties to Nassau and Suffolk.

Mondelēz has added equipment and space to the Tate’s factory and warehouses on the East End and hired 100 additional workers. Daily cookie production has jumped from more than 1.5 million to 2 million, spokeswoman Laurie Guzzinati said.

“Tate’s has deep roots on Long Island and is committed to maintaining an important presence in that geography,” she said. The company dates to the early 1970s, when founder Kathleen King first sold her homemade cookies at her father’s North Sea farm, later opening a single store in Southampton.

Some New York City bakeries in search of space to expand are considering Long Island because the price of industrial buildings is lower than in the five boroughs, where factories are being converted to apartments.

Bagels by Bell more than doubled its space, from 10,000 square feet to 21,500, by moving from Canarsie, Brooklyn, to Oceanside three years ago. The third-generation family-owned business has since added 11 people, bringing its workforce to 53.

"It was tight in Canarsie," said CEO Warren Bell, whose father, Martin, started Bagels by Bell in a Brooklyn basement after World War II. "This building is everything I dreamed of having. We have room to grow here."

The company turns out 15 kinds of bagels, which make up 60 percent of its annual production, and bialys —  a handmade product that Bell describes as a cross between an English muffin and a bagel, with onions in the middle. Bialys have become the company's signature product with more than 1 million made each year.

"It's very hard to find employees today, that's the big challenge," said Bell's son, Jared, the company's vice president, adding that some of the firm's manufacturing processes are more automated than they were in Brooklyn.

Like Bagels by Bell, most of the region's wholesale bakeries remain locally owned and employ fewer than 100 people, even if their products are available across the country.

“It’s done by hand,” manager Andrew M. Hahn said, pointing to the uneven layer of crumbs on cakes for sale in his factory outlet store on Allen Boulevard. “There’s not a lot of automation. We’re almost a dinosaur.”

Hahn’s parents, Regina and Andrew A. Hahn, started the company in the early 1980s from their home while both still were full-time teachers.

He said delis, bagel shops, gourmet markets and other retailers nationwide often pass off the cakes supplied to them by Hahn’s as having been baked on premises — a circumstance that Hahn said doesn't bother him.

“Everyone wants a handmade baked good – that’s our niche,” he said. “There are so many cheap baked goods out there that people don’t know quality baked goods still exist. But they do, from family-owned businesses like ours.”

Wholesale bakeries have moved up as an employment source as aerospace companies have faded.