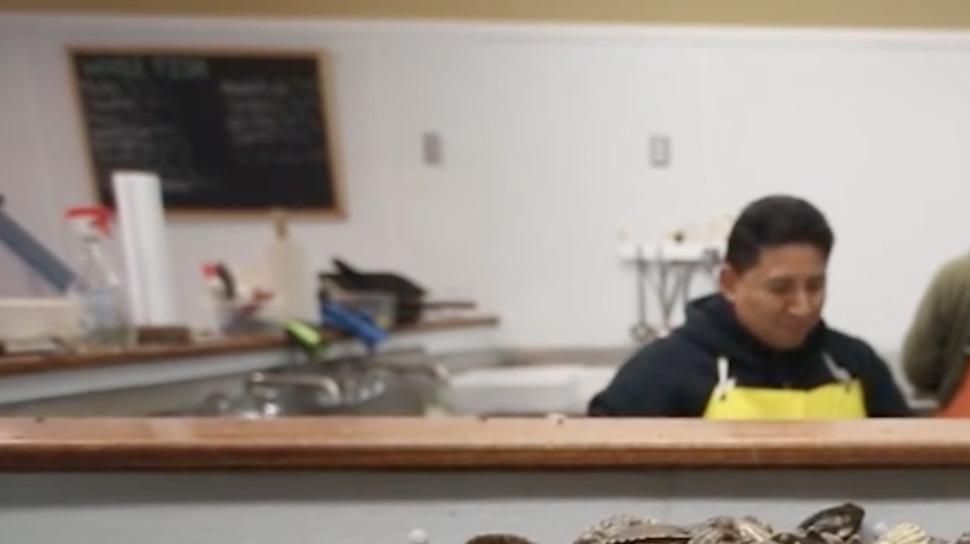 On Monday, Nov. 27, 2017, Southold Fish Market owner Charles Manwaring talked about the year's scallop season, which he called the biggest in the last four or five years. Manwaring said there were so many scallopers out there that he actually had to turn some away when he ran out of room in his cooler. Credit: Randee Daddona

An abundance of plumped-up bay scallops from waters around the Peconic Bay is giving Long Island’s East End shellfishing industry a vital boost.

With the industry already thriving from a resurgence of oysters, the plentiful scallop harvest is buoying businesses from the East End to Manhattan, where scallops and oysters from Long Island waters are prominent in fish markets and on restaurant menus.

Since the scallop season opened with a strong start in early November, fish dealers have been buying hundreds of pounds a day. The surge in volume is keeping fishermen, shuckers, wholesalers and seafood store owners busy, but it has also pushed prices down. Scallops are selling for less than $20 a pound, in some cases as low as $15, down from around $35 last year.

Some dealers had difficulty keeping up with the harvest at first, advertising for scallop shuckers on road-side signs. Customers who typically buy a pound or two are buying 4 and 5 pounds, shop owners say. Restaurants are finding ways to keep scallops on the menu.

“We had to turn a lot of fishermen away because we couldn’t open the scallops fast enough,” said Charles Manwaring, owner of Southold Fish Market, noting scallop shucking is a skill passed down over generations. “We have to train a new generation of scallopers.”

Bay scallops, which tend to be considerably smaller than their sea scallop relatives, are also larger this year — “bigger than we’ve seen in years,” Manwaring said. Baymen said smaller scallops that were thrown back last year in abundance benefitted from a full year of ideal growing conditions in local waters.

Nate Phillips, whose family owns Alice’s Fish Market in Greenport, has been supplying the shop with all the bay scallops it can sell. Each morning he takes his small fishing boat loaded with metal dredges and a sorting table to state waters not far from his Greenport shop to catch his daily quota of 10 bushels.

“We pretty much go out and get what we need,” he said. Alice’s also buys oysters from local suppliers, though Phillips said he’s considering farming oysters in the future.

“In the beginning of the season, it was hard to process the scallops because there were so many,” Phillips said, though more shuckers and a steady market of customers have helped.

Ben Wenczel, 30, a bayman from Mattituck, said the waters have been crowded with more boats fishing for scallops — as many as 200 — than he’s seen in years.

Many are part-timers taking off from regular jobs to make a quick profit. He said he expects early volumes to slow down a bit with the start of winter, bringing prices back up. “As soon as it starts getting cold and windy you’ll start seeing less boats,” he said.

Wenczel, whose father, Peter Wenczel, is a lifelong fisherman, has been fishing with eight to 10 scallop dredges on his boat, and catching 20 bushels a day — the maximum allowed for commercial fishermen. The dredges rake the bay bottom as his boat cruises through the water, scooping up scallops, which can swim.

On the South Shore, bayman Danny Lester was shucking scallops on a recent Saturday at his family’s Amagansett shop after a morning out on the waters around Sag Harbor. The shop is selling scallops for $20 a pound, $5 above the North Fork price. Lester said the catch was leveling off after weeks of good harvest, and he was contemplating spots on the North Shore.

The dredges used to catch scallops can be no wider than 36 inches. The season, which begins the first Monday in November, continues through the end of March. Dredges must be pulled in by hand; mechanical winches are prohibited, as is the use of dredges on Sundays.

In 1946, only 12,881 bushels of bay scallops were harvested in New York waters and 787,828 bushels of oysters, according to figures from the state Department of Environmental Conservation. A bushel contains in excess of 200 scallops and up to 150 oysters.

By 1960, the bay scallop harvest jumped to 140,495 bushels, while oysters plummeted to 108,059. Records show yields are widely cyclical, based on water conditions, harvesting and other factors.

This year’s boom in bay scallops is providing a boost to a shellfishing industry that has found a steadily rising business in recent years, primarily from oysters.

Matt Ketcham, who operates Peconic Gold Oysters Inc. out of Cutchogue, harvests oysters and dredges scallops from his boat out of New Suffolk, on the North Fork.

He and his crew members, Rob Ewing and Chase Hale, were shucking scallops on a windy afternoon in late November. “Scallops are really the gravy for me,” putting fast cash in his pocket to pay his crew, Ketcham said. Oysters are his longer-term investment, requiring up to two years to bring seed oysters to market, cultivated in his leased oyster beds in Peconic Bay. Oysters this year grew quickly because of perfect water conditions, he said.

Those conditions also appeared to benefit the scallop harvest. Christopher Gobler, professor of marine science at Stony Brook University, said even a slightly cooler summer this year benefits both species. And scallops saw fewer instances of rust tide. “The inhibitor in the past was rust tide,” he said. “The Peconic Bay is prone to it.”

Ketcham said he can deliver up to 7,000 oysters a day to customers from the East End all the way to Manhattan and the Bronx. Restaurants and fish dealers are the prime markets. The market is expanding, but so is competition.

“There’s been a lot more guys growing oysters part time,” he said, squeezing prices. But winter provides an opportunity for full-time oystermen to get their price, as part-timers back away.

Peconic Gold cultivates upwards of 2 million oysters a year, said Ketcham, selling around half a million. Most sales are direct to restaurants.

Oyster farming is a natural for Long Island. Clams, scallops, mussels and oysters have a long history in local waters. “We have a lot of really interesting networks of bays and estuaries that create a healthy ecosystem,” said Ketcham, who studied aquaculture at the University of Rhode Island. “The tidal exchange is very good.”

Mike Osinski, owner of Widow’s Hole Oyster Co. in Greenport and a past president of the Long Island Oyster Growers Association, said his sales have increased steadily from his first harvest 15 years ago.

“Oysters have been the new sushi for five years now,” he said. Greenport in its heyday more than 50 years ago shipped more than 2,000 tons of oysters a day to points across the state and country, said Osinski, a retired Wall Street software writer who with his family has made oyster farming a full-time, year-round job. Oysters were once a main course, he noted, but periods of disease and a push toward beef and pork for dinner took oysters from the diet. “They became an appetizer,” he said.

The surge of local oyster farmers is changing all that. Osinski said oysters are the fastest growing segment of the local seafood market, featured in pairing menus at wineries, at popular restaurants like Greenport’s Frisky Oyster and top New York City restaurants.

“Hipsters eat oysters,” he said. “In Brooklyn they’re on the breakfast menu.” They’re also a staple of the local-food movement. “People want to buy local, especially seafood,” he said.

There’s also a growing awareness of the ecological benefit of shellfish farming — oysters “enhance the quality of the water. They consume algae. The general public’s aware of that.”

Dave Daly, co-owner of Southold Bay Oysters, credited a program hosted by Cornell Cooperative Extension with getting him — and hundreds of others — started in oyster farming. For $150, the Suffolk Project in Aquaculture Training includes months of training and gives participants 1,000 seed oysters to cultivate near Cedar Beach in Southold. “It is truly a phenomenal program,” he said. It led him and his husband to lease 10 acres of Suffolk water bottom in a separate program, from which they now cultivate tens of thousands of oysters a year.

“We started with 20,000 seed oysters” in April 2016, he said, and have since tripled the amount. Oyster farming is now a full-time job for the couple, who formerly worked in finance and marketing.

“There are so many growers now,” Daly said. The Long Island Oyster Growers Association has more than 40 members. And the North Fork, with a history in oysters, couldn’t be better suited. With varying microclimates of water, “the conditions, the flow, the depth of the water — the oysters will taste noticeably different” from place to place, he said. Even though they are the same species of oyster, the tastes “vary drastically.”