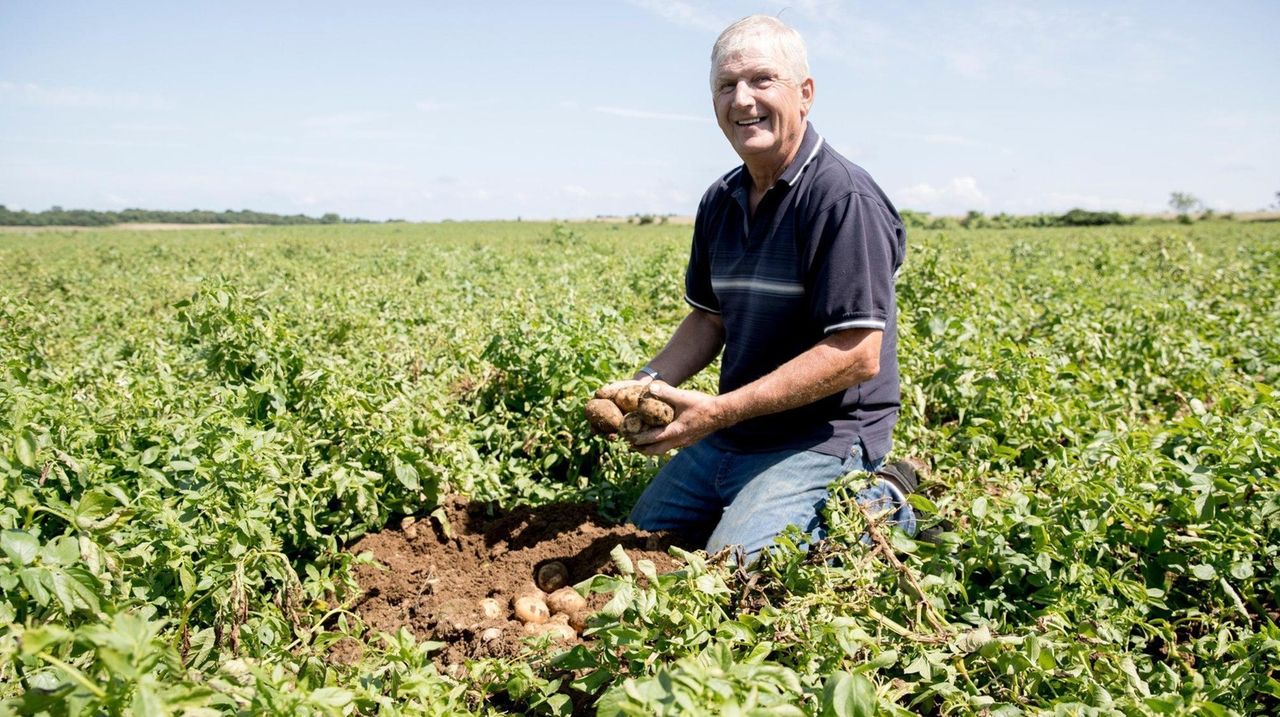 “Stick to what you know.”

That was the advice third-generation potato farmer Martin Sidor got from a colleague when he wanted to expand his family’s Mattituck farm beyond selling wholesale potatoes as did his father and grandparents before him. So he and his wife, Carol, bought machinery to produce potato chips and installed it in a rented commercial kitchen in Cutchogue, founding North Fork Potato Chips in 2003. Martin continues to grow potatoes, sunflowers and rye on his 100-acre farm, while Carol manages chip production and sales that have expanded the bottom line. Their three adult children help with day-to-day operations.

“It’s a difficult business because you’re competing with big companies — Frito-Lay, Wise, Utz,” said Martin, 68. “The margins are tight, and there’s been many years where at the end of the year we didn’t really show any profit.”

The Sidors’ struggle mirrors the industry. There are 1,000 to 1,500 acres of working potato farms on Long Island, compared with 20,000 to 30,000 in the 1950s-’60s, said Robert Carpenter, a Long Island Farm Bureau administrator. “The market has changed, and the demand is just not there like it used to be,” he said.

Martin and Carol live in the home his grandparents purchased in 1908 after emigrating from Poland in 1905. Although Sidor enjoyed growing up on the farm, he didn’t expect to take it on. After he got his bachelor’s degree, however, his father had a series of minor surgeries and needed help. Then, Martin saw farming from a different perspective and became determined to make the farm succeed.

In nearly 50 years of farming, Martin said he has overcome many hardships — poor weather, broken machinery and disease that can destroy a year’s crop. No matter, he said, he doesn’t allow time to feel sorry for himself when things go wrong.

“On a farm, there’s gonna be good days and bad days,” he said. “Hopefully that next good day is right around the corner. And that’s what keeps you going.”

NEW BEGINNINGS Seed potatoes are planted in May at Martin Sidor Farms in Mattituck. Potato farming is a year-round endeavor, explains Martin Sidor. "That's the neat thing about farming," he says. "There's nothing that lasts for an extended period of time."

POTENTIAL TROUBLE Martin Sidor reacts to news in May that part of his potato crop was infected with a bacterial disease. "It was a mess," he said in October, recalling how the growing season began. "To start the season that way, you just feel there is no way you're gonna get through."

A GOOD CROP "Oh, Randee, I think we're good," Martin Sidor says with relief to photographer Randee Daddona after digging up and examining the first potatoes of the season in July.

PROCESSING BEGINS During harvest — August to October — the potatoes are dug, sorted from debris, and deposited on a truck, which takes them to the barn for grading and bagging.

TOOLS OF THE TRADE The machinery doesn't always cooperate, says Martin Sidor, who replaced a broken bearing during harvest. Much of his equipment is old, and spare parts are difficult to come by. "My motto has always been, get the job done," he says. "Come hell or high water, get the job done."

CHANGING LANDSCAPE John Nierodzik, 76, of Southold works at Martin Sidor Farms. A friend of the family, Nierodzik once worked his own 200-plus acres, since sold as vineyards. "Things have changed around here," he says.

LIVING HARVEST Potatoes nearly fill the barn, where an intricate system of ducts and fans control the air, humidity and temperature. "A potato is a living organism. They breath and they change as you have them in storage," says Martin Sidor.

OUT TO MARKET Potatoes are bagged for distribution at wholesale, or for making North Fork Potato Chips, founded by the Sidors in 2003.

THE FAMILY PERSEVERES Martin and Carol Sidor's son, Chris, takes a break from working machinery that creates 50-pound bags of potatoes, 30% to 40% of which are destined for wholesale. His parents thought Chris would take over the farm, but injuries from a crash dashed those plans. Martin said the accident weighed heavily on the family, but he and his wife have learned to move on.

NEW VENTURES Hoping to eventually use their own sunflower oil to cook North Fork Potato Chips, the Sidors began growing the flowers several years ago; for now, visitors pay to wander among them.

CHIPS ON THE TABLE Sweet potatoes are sliced, salted and kettle-cooked, then inspected for packaging in Cutchogue. Although the wholesale potato business initially kept the chips afloat, "Slowly but surely the chips have been making money," says Martin Sidor.

FAMILY TIME Carol and Martin Sidor look at family photos in their Mattituck home. "My wife did not come from the farm, and I think it took her time to get adjusted to the place," he said. "The family on a farm is very important.

FRUITS OF THEIR LABOR Martin Sidor drives a tractor pulling a harvester, which digs up the potatoes. They move on a conveyor belt, where a farmhand helps remove debris before the potatoes are dumped in a truck.