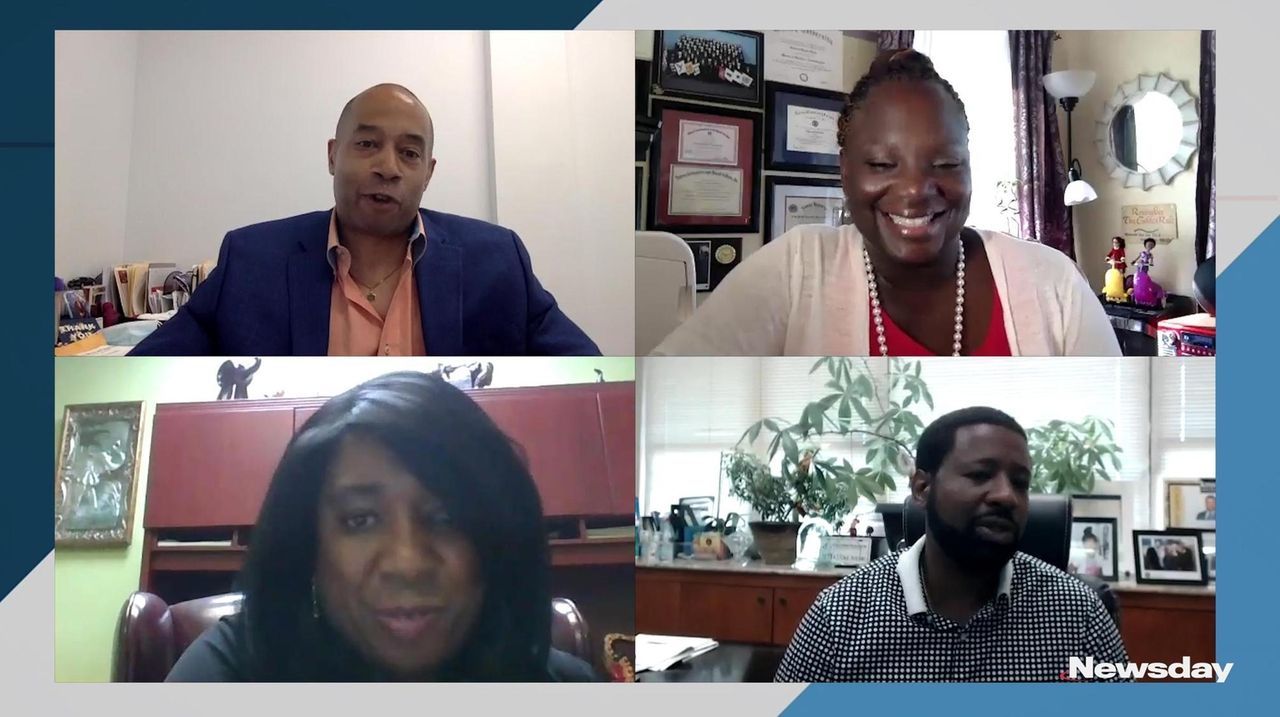 Black business owners on Long Island say that regardless of their years of experience or achievements, they are often made to feel like outsiders. In excerpts from a conversation hosted by Newsday, four Black CEOs discuss the impact of race and racism on their careers.   Credit: Newsday / Jeffrey Basinger

Black business owners on Long Island say that in many corners of the corporate world, regardless of their years of experience or achievements, they are often made to feel like outsiders.

Everything from accessing capital to networking to finding mentors can present disproportionate obstacles to Black entrepreneurs, they said. Many of these issues, which are present across the country, are especially persistent on Long Island, where Census estimates show half of the Black population lives in just 11 of the Island’s 291 communities, making the suburban region  one of the most segregated in America.

After nationwide protests sparked by the killing of George Floyd in Minneapolis, four Black Long Island CEOs  – Derek Peterson of Soter Technologies, Deidre Helberg of Helberg Electrical Supply, Bert Lurch of E Central Medical Management, and Subrina Oliver of O-High Technologies – joined Newsday for a candid discussion on the impact of race and systemic racism in their careers and in the broader business community.

The executives, all of whom have decades of experience in fields as varied as technology, education, finance and wholesaling, said while overt racist acts and speech are rare in their day-to-day lives, subtle acts of bias and discrimination are ever present.

“I may be at an event as a business owner myself with other business owners and…sometimes they think I'm the help,” said Oliver, chief executive of O-High Technologies in Deer Park, a workforce solutions firm that connects STEM employers with minority technology workers. “I clearly have the same [name] badge  that you have, but maybe that's not even something that they saw.”

Derek Peterson, chief executive and founder of Ronkonkoma-based Soter Technologies LLC, a software and technology development company on track to see $70 million in sales this year, said experiences like Oliver’s are all too familiar.

“Don't let me show up to a meeting carrying a box with one of my white workers," he said. "They immediately assume that I work for him or her. That is guaranteed.”

Some of the executives, like Bert Lurch, chief executive and co-founder of E Central Medical Management, a medical biller in New Hyde Park, shared that they avoided promoting their business as Black-owned for years over concerns that it would negatively impact their bottom line.

“We did not put our picture on our website,” said Lurch, whose partner, Louis Burke, is also Black. “We didn’t because we knew that if we put our color out there first, it would put potential clients in a position to judge us on our color rather than the merit of our work.”

All four owners, who participated in a 90-minute Zoom conversation this week, said working and making connections within mostly white business environments has meant continually having their titles and expertise brought into question, usually under the guise of polite conversation.

“All the time, who are you with? How did you get here? What is your story?” said Deidre Helberg, president and chief executive of 17-year-old Helberg Electrical Supply in Freeport. Many in Helberg’s white, male-dominated industry “always have to qualify, you know, my being.”

Access to capital, whether it comes from traditional lending institutions like banks, or from investors in the form of venture capital, continues to be a major roadblock to greater Black business expansion, said Phil Andrews, president of the Long Island African American Chamber of Commerce.

“We struggle with access to capital,” Andrews said. “There’s been a systemic lack of investment in the Black community.”

To help combat that, Andrews said the chamber is looking toward the creation of a Black equity fund that can help fill the gap in investment from institutions and individuals. “There is a need to build businesses and stronger communities,” he said.

The initiative has been driven in part by the energy and interest of other organizations looking to help the regional chamber amid the nationwide protests, Andrews said.

“It’s an opportunity for us to really seize the moment.” 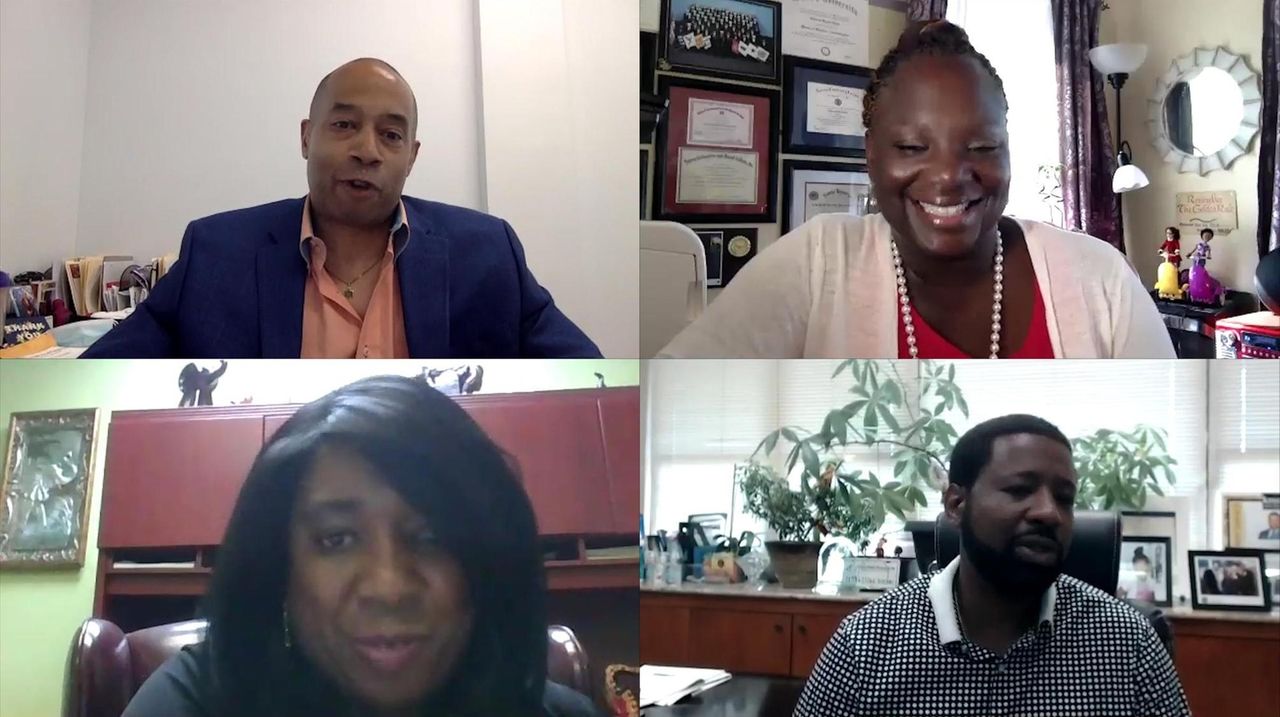 Black CEOs: The full conversation Black executives on Long Island say they are often made to feel like outsiders in industries they’ve been a part of for years. In this extended conversation hosted by Newsday, four Black CEOs share their experiences in launching and growing their companies.   Credit: Newsday / Jeffrey Basinger

Just over 30% of Black-owned firms receive loan approval for all the financing they requested from lenders, compared with the nearly 50% of white-owned firms approved for their full requests, according to a 2019 report from the Federal Reserve Bank of Atlanta. Black-owned loan applicants also had requests completely denied at a higher rate – 38% – than white-owned businesses, which were denied 20% of the time.

The picture regarding venture capital investments is even more stark.

Only 1% of businesses that received venture capital investments in 2017 had Black founders, according to a report by RateMyInvestor, a digital platform that connects founders and investors. In contrast, 77% had white founders.

For Lurch, working with banks as a new business presented hurdles and continuing annoyances.

“Time after time, it was a struggle to open an account,” said Lurch, who co-founded his medical billing company more than 20 years ago in Queens.

Even after establishing accounts, Lurch said he continued to have issues.

“Every time I go into the business [customer] line, if I wasn't dressed in a suit – even if I was dressed in a suit – they would always point and say, ‘No, I'm sorry, you need to go on the line over there,’” Lurch said. “It really annoyed me, because I worked really hard to get this business going.”

Lurch described moments like that as “little reminders” that communicated, “’We're not sure about you.’”

Peterson, whose company has developed a $35,000 walk-through scanner that can check the temperature, respiration rate and blood oxygen level of hundreds of people an hour to combat COVID-19, said he’s had a difficult time securing venture capital.

“I run a clean ship accounting wise and so I qualify for a lot of investment, but in seeking investment from VCs, angels [angel investors], private equity, every time, they put me through the mill,” he said. “You would not believe the amount of paperwork and justification and everything else, it's  unbelievable.”

After easily 100 attempts over the years with both Soter Technologies and other startups, Peterson said he had to fly to Florida to meet a wealthy Black investor over dinner to secure his first outside investment.

“I didn't have to have all the extra paperwork qualification that all the other people were asking me for. He believed in me right away and we got the deal done,"  Peterson said. “I don't get that same luxury and break looking at traditional banks, private equity, VCs. That's just not right.”

'Why am I still the only one?'

The executives said another challenge to the development of minority-owned businesses is networking, which can be made more difficult in business circles that lack diversity.

“As you become more seasoned in business, you realize that people have a lot of connections, and most of those connections are not connected to people who look like me,” said Lurch. Even though he has been in networking circles for years, he still finds that he is often one of the few if not the only person of color in attendance.

Lloyd said that in addition to structural issues related to capital, there are educational barriers in place that make it less likely for aspiring Black entrepreneurs to launch companies in STEM industries, for example, and more likely for them to own businesses in the food, retail and service sectors, which are often small shops largely supported by Main Street customers in Black communities.

But even when entrepreneurs do branch out into industries that serve more than communities of color, they often find networking and industry functions to be less than welcoming.

“I have dealt with sexism and the racism,” said Helberg. “I went to a manufacturing training and I was told to make a cup of coffee.

“This is something that I’ve been dealing with being in the industry for 17 years,” she said.

Lutisha Vickerie, a Hofstra professor who studies the struggles that minority entrepreneurs face in suburban and urban environments, said all startups wrestle with accessing connections and valuable information at first.

“Starting out, all small business owners face that to a degree,” Vickerie said. Answers to questions like how to navigate a financial process, or which office to visit to fill out the right paperwork, can be difficult to find without help, she said.

The difference for minority-owned firms, she said, is the barrier to finding that information through networks, a key resource for any company.

“Networks, networks, networks. It’s probably the highest wall that anyone working in this space has to figure out how to help diverse entrepreneurs climb over,” Vickerie said. “It can be lonely when you don’t have those networking groups.”

And while networking can provide access to potential clients or helpful tips, ultimately, it is the access to experienced industry-specific mentors that helps Black business owners reach business goals.

“Whether you grew up in a Black neighborhood or not, in business, you're still a person of color, you're still a Black person,” Oliver said. “Therefore, you still need a mentor, because you still have to have doors opened.”

Oliver, who mentors students of color, said access to mentors and opportunities is limited, especially in a region as segregated as Long Island.

“From the school to career process, we do face systemic racism,” she said. “Systematic racism is part of the design of Long Island.”

Theresa Sanders, president of the Urban League of Long Island, said it can be difficult for business owners in diverse communities to find those personal guides who can help open doors, as many of their contacts may also be dealing with structural barriers.

“It’s that mentoring piece that is so critical to an individual’s success,” Sanders said. “Black and brown children don't get access to that.”

Burdened with inequities in housing, school funding and access to good-paying jobs, many in the Island’s minority communities deal with institutional disadvantages that make industry-specific mentors harder to come by.

“In Black communities, we are so busy working to survive,” Sanders said.

Addressing the barriers that make entrepreneurship more challenging for Black residents will require a multifaceted approach that includes education, good governance at the local level, and investment in minority communities, said the executives.

Part of that, said Lurch, is being intentional when implementing potential remedies, and having a willingness to listen to the voices of impacted communities.

“We have to be very intentional in making these changes,” Lurch said. “People have to be open to these tough conversations.”

Ultimately, the CEOs said, the goal is to make the business landscape locally and nationwide more equitable and accessible to people of color, which will require concerted, long-term efforts.