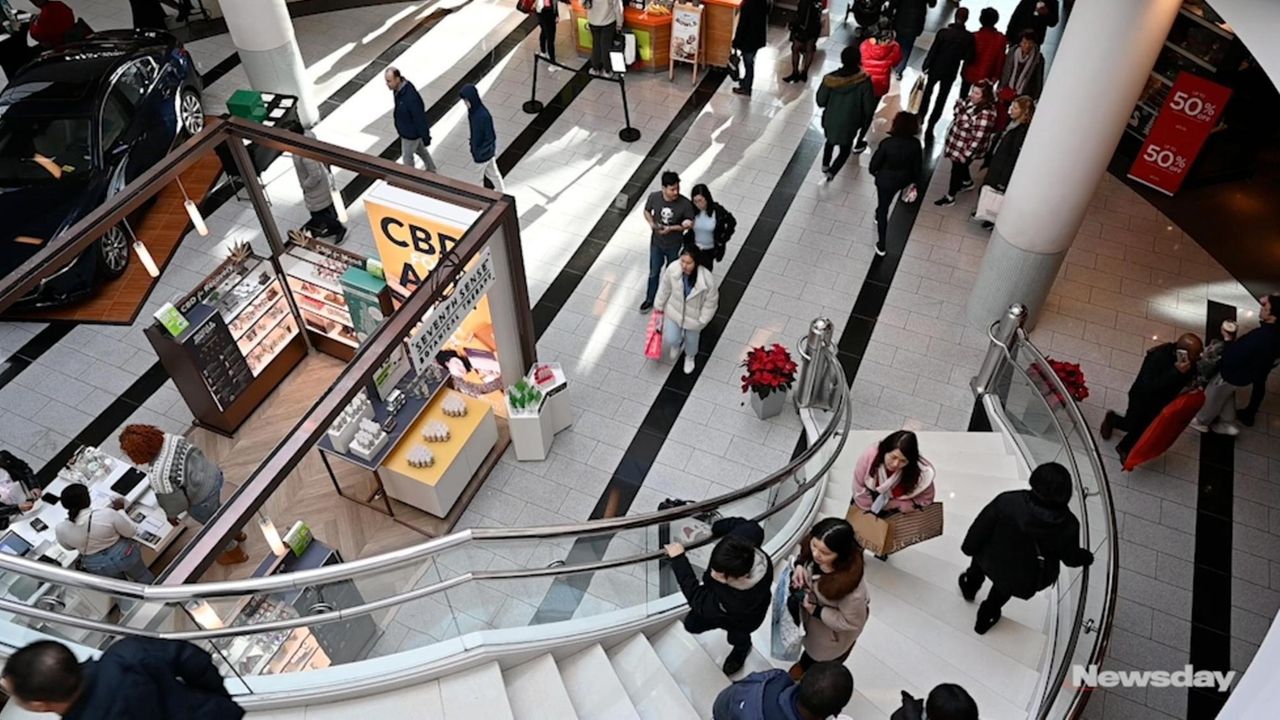 Marshal Cohen, chief industry analyst at Port Washington-based The NPD Group Inc., said buying appeared stronger than expected given the many sales in days leading up to Black Friday.

While Black Friday 2019 does not shape up as a "mega-shopping day," he called it "a good start to the holiday shopping equation."

Though its foot traffic is the highest, Black Friday is projected to be the third-biggest day of 2019 for spending in stores behind the Saturday and Friday before Christmas, according to retail experts.

At Roosevelt Field in Garden City, the Apple, H&M and Pandora stores saw brisk traffic, but no gridlock.

Jewelry retailer Pandora was offering 35% off in-store purchases and a short line of customers waited outside the shop at about 10:30 a.m.

The line was a lot longer at about 7 a.m., said Angie Cruz, a sales associate. “It’s calmed down a little,” she said.

Rego Park resident Thommie Retter, 51, shopped with his wife and two teenage daughters. During his first time Black Friday shopping at Roosevelt Field, he bought two pairs of sweatpants for 40% off at the Adidas store and two pairs of New Balance sneakers for 25% off at Dick’s Sporting Goods.

They will come in handy for his job as a tap dance instructor, he said.

He expected the crowds to be unruly and the shopping experience to be chaotic at the mall, “but ... everyone is orderly and calm and, frankly, has a smile on their face,” Retter said.

At Westfield South Shore mall in Bay Shore, Emily Flores, 50, of Brooklyn, shopped at a jewelry store with her cousin Elsie Rodriguez, 53, of Brentwood. Every year they exchange charms, a tradition going back a decade.

“It’s something we both really look forward to,” Flores said.

At a toy kiosk, Shakir Khaddar, 35, and his wife, Sarifum Nahar, 29, plotted to divert their sons, Saaim, 6, and Sarim, 5, so that they could focus on shopping.

“The idea is to buy them one toy each first so they’ll play and be entertained the rest of the time while we search for deals at the different stores,” said Khaddar.

Even though Thanksgiving remains a distinctly American holiday, Black Friday shopping sprees have spread around the world, in some cases triggering a backlash.

In France, "Block Friday" demonstrators sought to close entrances to a Paris shopping center and an Amazon warehouse south of that city to protest consumerism and its impact on climate change.

Whistles blew and smoke billowed in a commotion of a different kind at TrainLand in Lynbrook.

There, East Norwich resident and lifelong model train enthusiast Nick Barone, 53, came out in hopes of finding some odds and ends for his Christmas tree train display.

“You can’t find stores like this anymore. The hobby has gone online,” said Barone, who was drawn into the hobby at age 4 when his father brought home a Lionel train set.

Jonathan Landon, 39, of East Islip, said he does most of his Black Friday shopping online, but the owner of a Swiss and German replica railways collection has been coming to TrainLand for decades to support “the mom-and-pop and brick-and-mortar stores.”

For Kenneth Bianco Sr., 61, and his son Ken Jr., 32, owners of the third-generation family business, the holidays bring in customers seeking to revisit childhood memories. At the same time, the store is pushing into online marketing.

At the outlet mall

Myke Hampton of Brooklyn drove out to Tanger Outlets in Deer Park Friday morning to buy gifts for his parents and girlfriend — and his dog, a 3-year-old Chihuahua named Taco.

Hampton said he wasn’t sure what Taco was getting.

“Last year I bought him a playpen, and he never used it, didn’t like it,” Hampton said. “He is spoiled. But that’s OK. He is part of the family.”

Vivian Pepito, 54, of Elmhurst, Queens, said she, along with two friends, had already spent plenty of money.

“I bought too much to carry, so I’ve left it in the store and will pick it up when we leave,” she said, adding that she and her friends arrived at the center at about 6 a.m.

When all the numbers are tallied, Black Friday will be the second-biggest day of the year for online shopping, with $7.6 billion in spending projected, according to Adobe Analytics, a division of San Jose, California-based software company Adobe Inc. Online sales hit a record $5.4 billion by 9 p.m., up 22.3% over spending during that period last year, the firm said.

Cyber Monday is projected to remain the biggest day of the year for online shopping, with $9.4 billion.

Although data on in-store Thanksgiving spending is not yet available, online spending that day broke records — exceeding $4 billion, according to Adobe Analytics. By 5 p.m. Thursday, $2.1 billion had been spent online, which was a 20.2% increase compared to the same period last year.

The official kickoff of the holiday shopping season — the five-day period that includes Thanksgiving, Black Friday, Small Business Saturday and Cyber Monday — is expected to be an indicator of how strongly retail will perform over the entire season.

With the period between Thanksgiving and Christmas having six fewer days than it did last year, concerned retailers have been offering earlier and bigger promotions.

The retailers who stand to fare the best are those that are investing in integrating their ecommerce and brick-and-mortar operations, such as BOPIS (buy online, pick up in store), said Joel Rampoldt, a managing director in the retail practice at AlixPartners, a Manhattan-based consulting firm.

Mom-and-pop retailers that don’t have the budgets for advanced e-commerce platforms can do well by focusing on their strengths: personalized customer service, knowledgeable employees and knowing their local customer base well enough to know what products they want to see, he said.

“The problem with the big chains for a lot of customers is they feel very bland, they feel the same and you get the sense that, ‘What is offered in my town is the same as it is in every town in the country,’ ” he said.