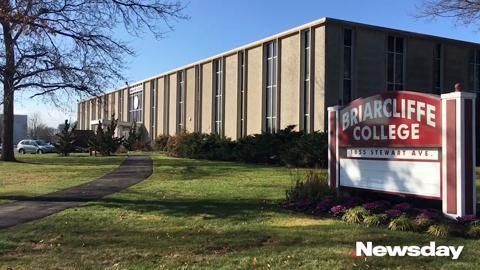 Bethpage-based Briarcliffe College will close its two campuses and lay off all 294 employees by the end of 2018, according to school emails and a notice filed with the state Labor Department. (Credit: Howard Schnapp)

Bethpage-based Briarcliffe College will close its two campuses and lay off all 294 employees by the end of 2018, according to school emails and a notice filed with the state Labor Department.

The decision comes after the college’s Illinois-based owner, Career Education Corp., put the school up for sale about seven months ago but could not finalize a deal.

“A decision was made after evaluating a number of factors, including current enrollment levels and increasing regulatory burdens,” Briarcliffe president George Santiago Jr. wrote in separate emails to staff and students Monday.

In the school’s notice of mass layoffs to the state, economics was cited as the reason for closing the for-profit school, which has campuses in Bethpage and Patchogue, and runs an online degree program.

Enrollment had fallen by 50 percent in less than 10 years as the college bumped up against less expensive community colleges that have gained popularity in hard times. While Briarcliffe tried to keep up with the times, including adding a curriculum in the booming health-care industry, that did not appear to be enough. In addition, new federal regulations are coming online to compare college graduates’ salaries and career success with their tuition and loan expenses.

The layoffs started Monday as part of a “teach-out,” a gradual cessation of operations that will include the shuttering of the Bethpage campus in April 2018 and the Patchogue campus and online program in December 2018, Santiago wrote.

The Bethpage campus will lay off 171 workers and the Patchogue campus 123, according to Briarcliffe’s notice to the state, required under the Worker Adjustment and Retraining Notification law. Santiago’s emails said full-time workers will get severance packages and transitional benefits.

In his email to students, Santiago said closing in 2018 will give them a “reasonable opportunity” to graduate or finish their studies. The college may close sooner or later, depending on the students’ needs, the college president wrote, and each student would be contacted directly to individualize plans for finishing study.

The news comes as the school prepares to mark its half century next year. It morphed from a secretarial college to a trade and business school to an institution offering four-year degrees in criminal justice and other studies.

About 10 years ago, a review by the state education department found wide-ranging deficiencies, including too few full-time faculty, inadequate computers and not enough books on the library shelves. The college later addressed those deficiencies.

A representative with Career Education Corp. could not be reached Monday. The company in 2013 agreed to pay $10.25 million in a settlement with the New York state attorney general’s office after an investigation revealed it had inflated job placement rates for its colleges, a way to boost enrollment.