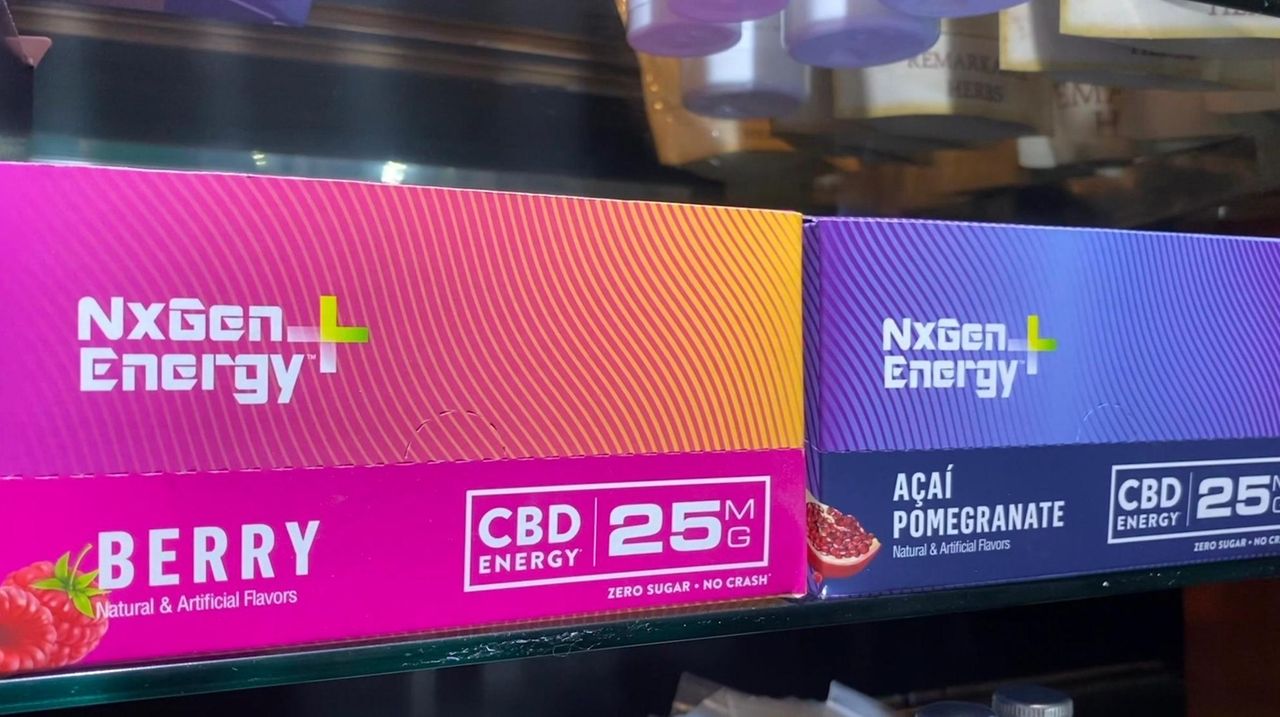 Ian Parker, CEO of Holbrook-based Pura Vida Vitamins, explained Wednesday why he sells CBD-infused products despite government warnings that the sale of such goods is not allowed. Credit: Howard Schnapp

Long Island retailers are selling CBD-infused food and beverage products despite federal, state and local government agencies warning that the sale of such goods is not allowed.

CBD or cannabidiol — a cannabis-derived compound that isn't psychoactive — is a key ingredient in a range of edible products including brownies, chocolate bars, gummies, dried fruit, lollipops, popcorn, teas and waters sold at businesses from gas stations and vape shops to cafes and health food stores.

A recent Newsday spot check found these items lining the shelves of more than a dozen businesses in Nassau and Suffolk counties.

Proponents of CBD say the products help them sleep, make them feel calmer and relieve joint pain, although scientific research supporting these claims is scarce.

Consumer interest in CBD, however, is abundant. An April 2019 Consumer Reports survey of 4,000 Americans found that more than a quarter have tried a product containing CBD. One in seven said they use it every day.

The U.S. Food and Drug Administration, New York State Department of Agriculture and Markets and Nassau and Suffolk County health departments all prohibit the sale of edible products containing CBD, but enforcement efforts are limited.

CBD is also sold in topical creams, lotions and cosmetics; the sale of those products is not regulated by New York State.

Regulators say there are unanswered questions about the science, safety and quality of products containing CBD.  "What happens if you eat food with CBD in it, use CBD-infused skin cream and take other CBD-based products on the same day? What if you use these products daily for a week or a month?" a July FDA Consumer Update asks.

FDA testing found that many products did not contain the levels of CBD they claimed, the agency reported last month. "Consumers should beware purchasing and using any such products," it said.

Local sellers of the edible products cite high consumer demand, along with confusion over rules they say are in flux and enforcement that is inconsistent or non-existent, as reasons they decide to keep selling the items.

"Our number one seller is the Pura Vida CBD gummy," he said. "Our watermelon-flavored rings have won awards at national candy industry conventions and are the most praised by our customers."

The company's products are sold at about 1,500 independent convenience stores in New York, New Jersey and Connecticut, at City Acres, a specialty grocer in Manhattan, and on the firm's own website. Prices range from $10 for a 10-piece bag of watermelon or peach-flavored CBD gummies to $60 for a 30-milliliter bottle of CBD oil (about six teaspoons).

"You have millions of people who are demanding it -- namely, by purchasing and using CBD products," he said.

Another seller, Joseph Librandi, owner of OK Botanicals Wholesale Direct, a Copiague shop that sells an assortment of CBD-infused products including gummy bears and honey sticks, also classified the demand for CBD edibles as huge and said CBD gummies are top sellers at his company, too

"Our customers love them," Librandi said.

Representatives of several other retailers that sell CBD edibles did not agree to be interviewed.

Whitt Steineker, an attorney who specializes in cannabis law, said, "It's highly unusual that something that is so clearly prohibited by federal law is so openly sold in so many places, including areas in which local laws also prohibit the sale of these items.”

Steineker, a partner at Bradley, an Alabama-based law firm, added that "most of these business owners are taking calculated bets that the likelihood of them being subject to an enforcement action is outweighed by the potential of a financial upside.”

Senate Minority Leader Chuck Schumer (D-N.Y.) called on the FDA to issue guidance on CBD labeling, marketing and sales, saying a lack of regulatory clarity is holding back what has the potential "to be a billion dollar industry across New York State, bringing along countless jobs and truly meaningful economic development." For the industry to succeed, "farmers, growers, producers, consumers and vendors need to know exactly what the rules of the road are and, right now, they’ve got no idea," he said.

The law legalized the cultivation and sale of hemp  — a type of cannabis plant with a THC concentration of 0.3 percent or less, from which CBD oil is derived. Hemp can also be used to produce textiles, shoes, paper, rope and biodegradable plastics. Since passage of the law, it's been widely recognized that CBD extracted from hemp is also legal nationwide.

But FDA regulations explicitly state that the compound is not allowed in food, drinks or dietary supplements. The agency has approved one prescription drug containing CBD to treat rare, severe forms of epilepsy.

The FDA considers food items containing CBD "adulterated" and subject to enforcement actions including fines and seizure or destruction of the products.

"When a product is in violation ... FDA considers many factors in deciding whether or not to initiate an enforcement action," the agency says on its website. Those factors include "agency resources and the threat to the public health. FDA also may consult with its federal and state partners in making decisions about whether to initiate a federal enforcement action."

An FDA spokesman would not offer any further clarification of the agency's enforcement stance.

While the FDA regulates producers, food stores are regulated by the state Department of Agriculture and restaurants and cafes by county health departments.

The Department of Agriculture, which regulates bodegas, supermarkets and other establishments that sell groceries, in July posted on its website a clarification of its policy on the inclusion of CBD in food products: "No food or beverage product may be made or sold in New York State if it contains CBD as a food, a food additive or ingredient."

The department allows the sale of CBD only as a dietary supplement that customers can purchase and add to their own food or drinks. The only supplements approved for sale in the state are those produced by the 483 companies accepted into the state's industrial hemp program.  The products are subject to manufacturing, labeling and marketing standards set by the department.

Restaurants, cafes and other food establishments regulated by the Suffolk County Department of Health Services that sell or serve food and beverage products that contain CBD are subject to an "adulterated food" sanitary code violation.

"The food and or CBD product itself would be embargoed and formal enforcement action against the business would be initiated," said Stephen Kane, principal public health sanitarian for the department.

"If the department is made aware of the availability of CBD, or CBD-adulterated food in a food business which it does not regulate, the agency with regulatory responsibility would be notified,"  he said.

The department determines if foods containing CBD or other adulterants are present in regulated food establishments during routine inspections, and would investigate complaints that food establishments were serving CBD-containing food or beverages, Kane said, adding that it has not received complaints, nor been made aware of businesses selling CBD-adulterated food in Suffolk.

Restrictions on edible CBD products can put a huge financial hit on companies like his, Librandi of OK Botanicals said, adding that CBD-infused edibles account for 50 percent of his store's sales, with CBD oils taken orally and CBD topicals making up the rest.

Librandi, who said he believes in the power of CBD as a "healing" product, opened OK Botanicals as an online store nearly three years ago. Several months ago, he opened Wholesale Direct, the company's 1,000-square-foot brick-and-mortar store where he sells CBD honey sticks for $4 each, among other offerings.

"The opportunity for growth was a determining factor" in opening the store, he said. "CBD is a growing business."

But worries over more stringent legislation or enforcement that could "change the game at any minute" are ever-present, Librandi said, adding that he'd welcome regulation in the industry as a protective measure for consumers.

In its July Consumer Update, the FDA said it is "evaluating the regulatory frameworks that apply to certain cannabis-derived products that are intended for non-drug uses, including whether and/or how the FDA might consider updating its regulations, as well as whether potential legislation might be appropriate. The information we have underscores the need for further study and high quality, scientific information about the safety and potential uses of CBD."

Steineker, the cannabis attorney, said, "It’s going to take some time before we see comprehensive regulations regarding CBD... The government always moves a bit slower than the public would like."

Those in the CBD industry "trying to do things the right way welcome robust regulations," he added. "If you’re making a quality product that contains what the label says it contains, you want the regulations. They’d take all the companies cutting corners right out of the market.”

Many sellers said they do not expect the FDA -- given its limited resources -- to enforce its current position, with one exception: businesses that sell products that make explicit health claims that could endanger people or delay them from pursuing medical care for life-threatening conditions. In the last three years, FDA officials have sent letters to 12 companies around the country, warning them that they may not make such claims in their labeling.

And local enforcement has convinced at least one business owner to change his menu for now.

Pourmand has since removed the item from the shop's menu.

"We got a courtesy call from the [Nassau] health department asking us to stop adding CBD to our drinks," he said. "They view CBD through the same eyes as a Tylenol or Advil, in the sense that you can't crush up pills and add them to a latte. But a coffee and an Advil can still be sold separately in the same place."

Pourmand now sells individual single-dose vials of CBD oil that customers can buy and add to their drinks at their own discretion.

But many customers still ask for the Care Bear, he said. "When we tell them we can't sell it, some people get sad and they kind of settle for something else."

"It makes more financial sense to have the option that so many people want, but for now, that's the way it is," Pourmand said. "For me, it's not worth jeopardizing my whole business over it."