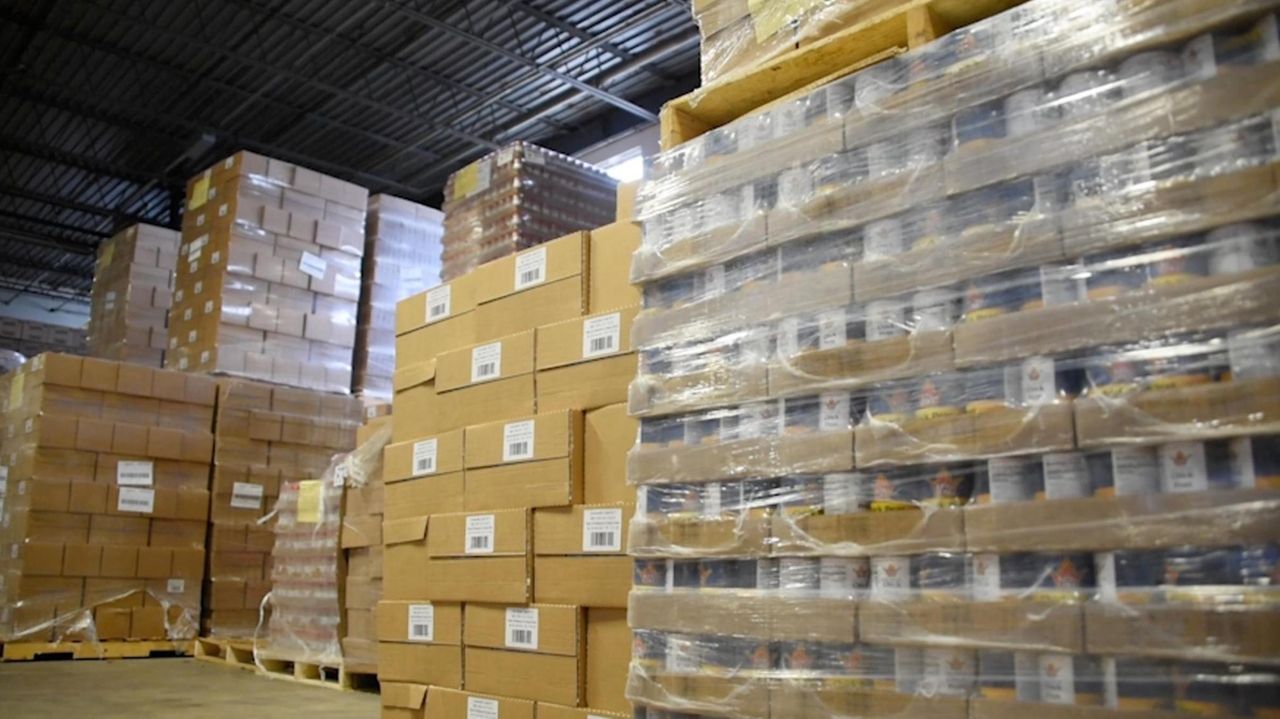 All set to be delivered to hungry Long Islanders, courtesy of President Donald Trump's trade war with China. And there's much more food to come.

Millions of pounds of groceries that American farmers can't sell to Chinese markets are flooding the docks of pantries, soup kitchens and food banks nationwide.

Pork, pistachios, oranges and a dozen other fruits, nuts and vegetables — fresh and canned — are all on the administration's shopping list, part of two multibillion-dollar bailouts for the growers and producers being squeezed by the economic tit-for-tat.

On the Island, the lone recipient is the Long Island Cares-Harry Chapin Food Bank, which distributes more than 8 million pounds of groceries every year to nearly 400 sites — from soup kitchens and shelters to group homes and day care centers.

"The president appears to have fallen into this policy by default," said Paule Pachter, the nonprofit Long Island Cares' chief executive. "But the important thing is that hungry people on Long Island are being fed."

The Beijing-to-Brentwood spinoff comes from the indelicate intersection of foreign policy and federal intervention in Washington.

Six months later, the White House crafted a $12 billion bailout for farmers — a key Trump voting bloc. The package called for the U.S. Department of Agriculture to buy $1.2 billion in farm commodities for food banks as well as public schools. Nearly $1.1 billion worth of groceries have been delivered already, the USDA said.

“This is a short-term solution to allow President Trump time to work on long-term trade deals,” Agriculture Secretary Sonny Perdue said last summer. “The president promised to have the back of every American farmer and rancher."

So far, Long Island Cares has received nearly 1.8 million additional pounds of food; another 400,000 pounds should arrive within the next two months at the nonprofit's warehouse in Hauppauge, said Pachter, who serves on a task force that advises the USDA on trade mitigation policy.

And the food bank is counting on the bounty to grow from another bailout that goes into effect in a few weeks; of the $16 billion package, the USDA is spending $1.4 billion on fruits, vegetables, beef, pork, lamb, chicken and milk.

All the groceries have been flying off the shelves, but particularly the pork and fresh fruits — apples, oranges, grapefruits and pears, Pachter said.

"These are products we don't normally get," he said. "Between the regional food bank and the food pantries and the soup kitchens, 80 percent … is already out in the community feeding the people that need it the most."

About 270,000 Long Islanders — close to 10% of the region's population — don't have enough to eat every day, government numbers show. Already, Pachter estimates, the first bailout has helped feed 250,000 of the Island's hungry.

"Some people can't afford to eat or don't have enough to eat," Eliassaint said. "So the community really appreciates this move."

Yvone Marten started coming to the food pantry after her husband died unexpectedly last month. Marten, 50, supports their three children — 6, 18 and 20 — on what she makes as a secretary.

"The church has become very important to us," said Marten, 50. "We are down to just one income so it's needed."

At the Hauppauge warehouse, Pachter said, Long Island Cares is gearing up for the next round of deliveries with construction, equipment and staffing. The USDA is footing the $80,000 bill, he said.

Done already is a 1,200-square-foot addition to the 25,000-square-foot warehouse in Hauppauge. Perishables will go in another mobile cooler that the food bank is leasing. A full-time program administrator is being brought in — and the truck drivers and warehouse workers will be paid for their overtime hours.

For Pete Braglia, the nonprofit's chief operating officer, managing the logistics of the deliveries has been "nightmarish." For example, getting cartons of oranges to soup kitchens and food banks with refrigeration can be tough.

"It has put a bit of a strain on our distribution," Braglia said.

For Pachter, the bailout hasn't been a boon just to the food bank: The immigrant community is benefiting, too. Many of Long Island's hungry are living in the country illegally, he said.

Since taking office, the president has taken a hard line on both food-stamp eligibility and immigration. Over the summer, for example, the White House moved to kick 3 million Americans off food stamps because they are skirting the income requirements. Next month, new rules could deny green cards to immigrants who use food stamps, Medicaid or other kinds of public assistance.

"If you look at the program and the people that are benefiting from this additional food, it is ironic," Pachter said. "Although the president is going in one direction with immigration and human service programs and entitlements, he is also providing food for the hungry."

To Noelle Campbell, all that matters is the thousands who come every year to the Gerald J. Ryan Outreach Center for something to eat. The Wyandanch food pantry, which Campbell oversees, is serving meals to more than 1,000 Long Islanders a month, including kids, seniors and the homeless.

"This program is providing people with more choice and better nutrition," Campbell said. "We have a lot of people in need of food. So for us, this program is definitely a good thing."