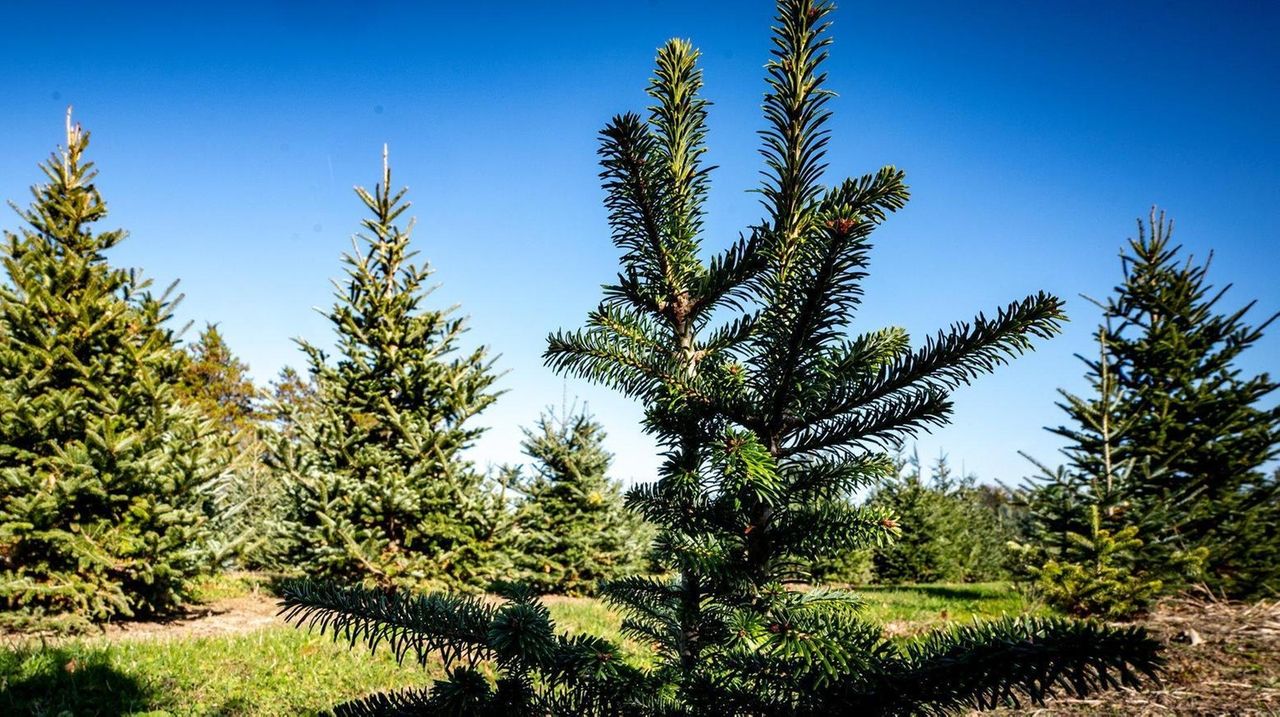 Darts Christmas Tree Farm in Southold last year sold out of mature trees for the first time since it was founded in 1971. Owner Ed Dart expects to sell out again this year. Credit: Newsday / J. Conrad Williams Jr.

The Huntington Fire Department has been selling 400 to 500 Christmas trees annually as a fundraiser for more than 25 years, but preparation for sales this season was different.

The department had to pay higher prices to the Pennsylvania tree farm that supplies its trees, said Firefighter John Mohlenhoff, who is the secretary for the department’s hook and ladder company.

"Prices have gone up significantly. We’ve had to compromise on what types of trees we’re getting, sizes, everything," said Mohlenhoff, who said the department had to add some Douglas fir trees to supplement its amount of Fraser firs.

10-30% How much more consumers should expect to pay for their tree compared with last year, experts say

Consumers in search of both real and artificial Christmas trees this year should start shopping early and prepare to pay about 10% to 30% more than last year because fewer Christmas trees — and less selection — will be available, industry experts said.

"Some of the major retailers say they have about 43 percent of their inventory right now when it should be closer to 70 percent at this time of the year," said Jami Warner, executive director of the American Christmas Tree Association, which represents Christmas tree retailers.

Rising Christmas tree prices and declining tree varieties are the result of several factors, including shipments of artificial trees, most of which are imported from China, being delayed by supply chain issues, and a lack of truck drivers to make deliveries, industry experts said.

In addition, after the recession ended in 2009, struggling farmers planted fewer trees for several years.

Demand for Christmas trees has risen in recent years, but it takes eight to 10 years for a tree to reach maturity, said Gary A. Chastagner, a plant pathologist and extension specialist at Washington State University.

"The Christmas tree industry is a very cyclic industry," he said.

Part of the strong demand for Christmas trees is tied to the COVID-19 pandemic, which led to months of shutdowns of movie theaters, concert venues, sports stadiums and other places where consumers could spend their disposable income, industry experts said.

Unable to participate in leisure activities, consumers focused on decking the halls of their homes with Christmas trees and other décor for the holidays in 2020.

That trend is expected to continue this holiday season, experts said.

Last year, the Huntington Fire Department sold trees ranging from $50 to $120, depending on the size, Mohlenhoff said. For the first time in about a decade, prices were raised this year, by $5, to help the department somewhat offset its increased prices, he said.

The department’s trees sold out within 48 hours of the start of the sale during the first weekend of December last year, he said.

"Normally, that’s a weeklong sale. ... It probably has a lot to do with COVID," said Mohlenhoff, who is hoping for a similar outcome this year.

Darts Christmas Tree Farm in Southold, which has eight acres dedicated to growing trees, had its normal number of trees last year, but sold out of mature trees for the first time since the business’ 1971 founding, owner Ed Dart said. Even trees that weren’t fully mature were sold, he said.

"Last year, they took trees that would have been our market size this year, so that’s why we have fewer big trees this year than normal," he said.

'I expect we’re going to run out before the season is over.'

He expects strong demand during this year’s selling season, which starts Black Friday. "I expect we’re going to run out before the season is over," Dart said.

A better description is "tight market," he said.

"We had a glut and there were hundreds of Christmas trees left on tree lots after Christmas. ... That has ended and that’s a good thing," Hundley said.

There is a public perception of a shortage because farmers can’t respond quickly to growing demand for trees, due to the time it takes trees to reach maturity, said Travis Birdsell, a cooperative extension agent at North Carolina State University.

Birdsell works with tree growers in Ashe County, North Carolina, which is the second-highest tree-producing county in the country. "We’re trying to balance this out to really run a business and plan for the future," he said.

On Jan. 1, 2020, there were 2,795 Christmas tree-growing operations and 118 million trees in those operations across the nation, according to the U.S. Department of Agriculture’s National Agricultural Statistics Service.

For Christmas 2020, 13.5 million trees were projected to be cut and sold, according to the USDA. The number is projected to rise to 13.9 million for this Christmas.

Costello’s Ace Hardware sells artificial trees at its 38 stores, including the 22 on Long Island, said Andy Pergament, category manager for the chain. In addition, it sells real trees at two stores — in Copiague and Bellmore.

"We’re seeing less product than normal for this time of year. Most of the growers are having the same issue we’re all experiencing as far as help and trucking," said Pergament, who added Costello’s prices have risen 20 to 25% this year.

Usually, Costello’s Christmas merchandise is set up in stores by late October. This year, supply chain issues will delay that until late November, as the chain is awaiting a few shipping containers of artificial trees from China that are supposed to arrive next week, said Pergament, who noted the chain expects to have enough trees to meet customer demand.