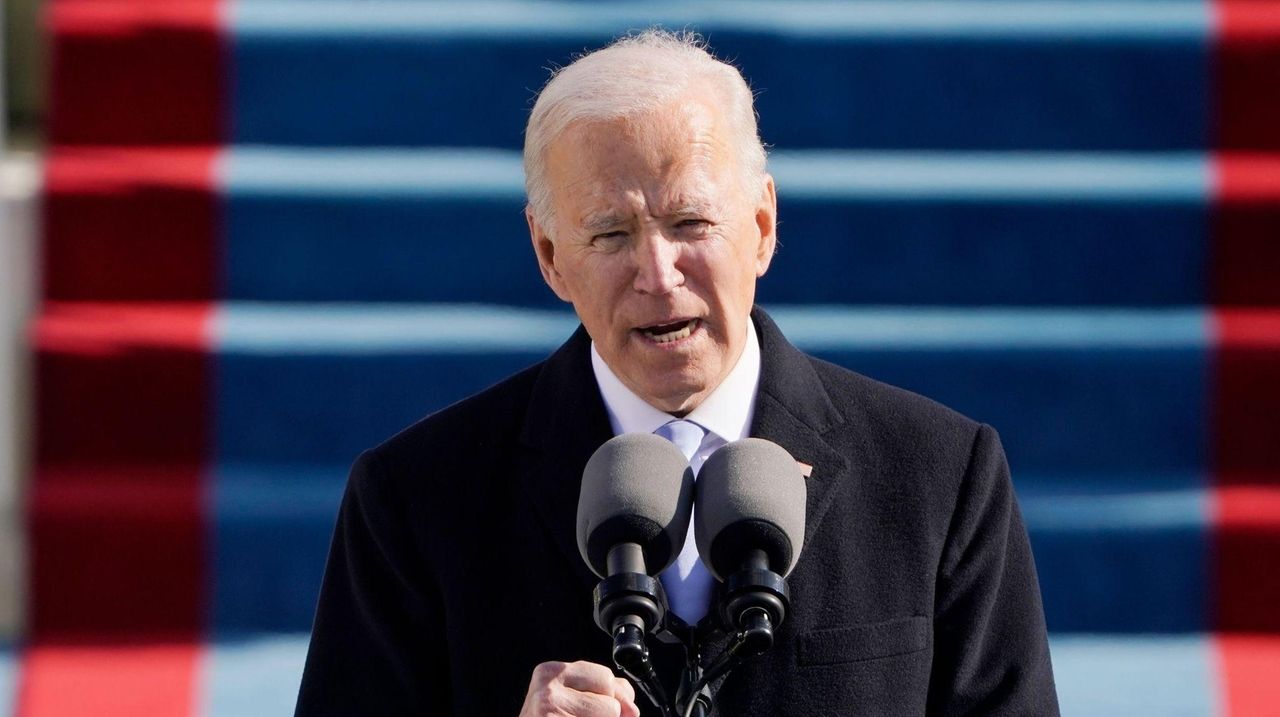 President Joe Biden has spent months devising a strategy to revive the U.S. economy, and some of his proposals would have more of an impact on Long Island than others. Think stimulus, taxes, building projects and jobs.

Business executives, union leaders and economists predicted the 46th president’s drive to put more money into the bank accounts of small businesses and low- and middle-income individuals will serve as a tonic for the Island’s economy as the money is spent. About 70% of economic activity is derived from consumer spending.

However, the biggest spenders — households making more than $400,000 per year — may open their wallets less frequently if Biden succeeds in raising the federal income tax rate on top earners from 37% to 39.6%, the experts said. He also wants to apply the higher tax rate to the investment gains of millionaires.

"Biden’s proposed changes to the Paycheck Protection Program loans for small businesses and the grants that he’s talked about will give small businesses what they need to survive, it will prevent further job losses," said John A. Rizzo, chief economist for the Long Island Association business group and a Stony Brook University professor. "The smallest of small businesses will benefit the most … [and] that can have a quick impact on Long Island’s economy because almost 90% of our business establishments are small businesses."

Rizzo and others said spending by residents of Nassau and Suffolk counties should increase if Biden persuades Congress to repeal the $10,000 limit on deductions of state and local taxes, or SALT, on federal income tax returns. The SALT cap has hit Long Islanders particularly hard because their property taxes are among the nation's highest.

"This translates into a lot more income for Long Islanders because you can deduct your entire property tax bill. …That would certainly stimulate consumption," Rizzo said. But he cautioned that Biden’s agenda also includes limiting itemized deductions for higher income households, and "that could offset the positive effects of repealing SALT."

The new president proposes to cap itemized deductions at 28% of their value for households with yearly income above $400,000. For the same group, he also would phase out the deduction that allows small business owners and the self-employed to deduct up to 20% of their business income on their personal tax return, according to the Biden-Harris campaign policy platform.

Small business owners said the new administration’s approach to taxes would discourage innovation by punishing people who risk everything to start a business that then thrives.

"Why should the people who are trying to make things happen pay the price for those who are not making it happen?" said Elizabeth Wellington, vice president and co-founder of Wellie the Transporter LLC, a small trucking company in Elmont. "The government wants to take more money because the person is making more money. No, that shouldn’t be. There should be one tax rate for everyone," she said.

Wellington and her husband, Antonio, started their business in 2004. It has two employees — one being the couple's son Stephen — and three trucks to make deliveries of furniture, televisions and other home goods to retailers in the Northeast, including Walmart, Macy’s, BJ’s Wholesale and Costco.

Wellie the Transporter began making deliveries to New England last year after the pandemic shut down activity in the metropolitan area. The firm used a PPP loan to purchase a 53-foot container, which was needed to win new contracts.

"I think Biden has a good idea in reaching out to small businesses with more help, especially minority businesses. They are really hurting and may not have been able to get a PPP loan," said Wellington, an officer of the Long Island African American Chamber of Commerce.

La Fuerza Community Development Corp. has been on the front lines of helping minority- and women-owned businesses obtain financing. Executive director Giovana Bracchi said the East Norwich lender would be able to help more entrepreneurs if Biden keeps his promise to fully fund the Community Development Financial Institutions Fund, which supports La Fuerza and other CDFIs.

"I think Joe Biden is trying to help industries that are really struggling and were left behind, more or less, because of the pandemic," Bracchi said.

Biden, speaking to the nation on Jan. 14, outlined his economic agenda, saying it would help small businesses, workers and municipalities that are struggling due to COVID-19 restrictions on nonessential activity. He called for increased spending on clean energy, infrastructure, technology and worker training. He said tax increases on high earners and profitable corporations would generate the revenue needed to pay for his proposals.

The Democrat said his plan would create more than 18 million jobs and foster equity in the economy.

"If we invest now — boldly, smartly and with an unwavering focus on American workers and families — we will strengthen our economy, reduce inequity and put our nation’s long-term finances on a more sustainable course," he said. "And where we are making permanent investments … we will pay for them by making sure that everyone pays their fair share in taxes."

Even so, Biden's proposed 39.6% income-tax rate for the wealthy would still be below the top marginal rate from 1932 to 1986, according to tax experts in Washington.

The Biden agenda calls for the federal government to purchase $400 billion in American-made products over four years, including medical supplies for the next pandemic. A 10% "Made in America" tax credit would reward employers for hiring in this country, returning jobs that were moved overseas and buying supplies that were produced domestically.

Biden’s focus on the manufacturing sector should benefit Long Island factories, said Jon Cooper, president of Spectronics Corp., a Westbury-based maker of fluorescent dyes and ultraviolet lamps used for leak detection, and electric pipe freezers used to maintain nuclear reactors on submarines. Cooper, a former Democratic majority leader of the Suffolk County Legislature, donated to Biden’s past campaigns and said he's talked with the Biden-Harris transition team about what U.S. manufacturers need to be successful.

Cooper said the new administration has the right approach to international trade. Biden favors working with allies to bring China and other trade violators into compliance rather than increasing import taxes, or tariffs, on their products, which often is met with retaliatory tariffs on U.S. products.

President Donald Trump’s trade war "was a mistake" because it reduced manufacturers’ export sales and raised prices for those that buy U.S.-made materials, said Cooper, adding Spectronics saw its exports to China drop.

However, Biden’s proposals for worker training, not trade, are what Cooper said he’s "most excited" to see implemented. The new president wants to spend $50 billion on worker training programs, including apprenticeships and community college courses.

Cooper said Spectronics, with about 100 employees, has difficulty finding machinists and has relied on a Suffolk County Community College program to fill vacancies. "It’s difficult for a small manufacturer to take on the costs of on-the-job-training without getting some financial assistance from government," he said.

Besides a more skilled workforce, the Biden agenda’s biggest long-term impact on the economy may come from the $1.3 trillion that he plans to spend on improvements to roads, bridges, mass transit, broadband and other infrastructure nationwide, economists said.

Offshore wind farms would be part of the president’s building program, a boon for Long Island.

Five wind farms have already been announced for locations that are 15 miles south of Jones Beach and 30 miles or more from Montauk Point. The Biden plan would double the number of wind farms nationwide by 2030, "which will create jobs here," said Molloy College economist Steven Kent.

While the wind turbines are expected to be built elsewhere and the towers and foundations in Albany, there would be opportunities for local workers in the construction, operation and maintenance of the wind farms. "Having someone on Long Island who can make the equipment is going to be important when you need a piece of equipment to quickly fix the turbine," Kent said.

Biden’s agenda encompasses proposals that liberals and unions have long advocated: Raising the federal minimum wage from $7.25 per hour to $15 for all workers, equal pay for men and women doing the same or equivalent work, mandatory paid sick leave and stronger workplace safety regulations.

The federal wage hike wouldn't impact many Long Island workers because New York’s minimum hourly rate is scheduled to increase $1 to $15 on Dec. 31. However, Biden’s proposed increase, if successful, would give raises to waiters, bartenders, bellhops and others who rely on tips to supplement their sub-minimum wage under state law.

Employees wouldn’t be the only beneficiaries. "Raising the minimum wage nationally could help local businesses by leveling the playing field with their competitors in other states," who would likely have to increase wages, said Richard Vogel, dean of Farmingdale State College’s business school.

He said Biden’s plan to improve employee pay and benefits would increase economic activity by encouraging consumers to spend.

Workers may have an easier time unionizing with Biden in the White House, according to labor leaders.

"It’s transformational change to have the policy of the federal government be to support workers who want to organize, who want to be represented by a union," said Lenore Friedlaender, a top official at Local 32BJ of the Service Employees International Union. 32BJ represents 85,000 janitors, building maintenance workers and airport employees statewide, including 3,000 who live in Nassau and Suffolk.

She said Biden's proposal to strengthen the federal government's role in resolving labor-management disputes would benefit SEIU and other unions. Even in New York, the country’s second-most unionized state, the new president's embrace of organized labor would change workplaces, she said.

"Joe Biden's policies will equalize the balance of power a little bit," said Friedlaender, who oversees 32BJ's activity on Long Island. "When the penalties are increased for employers that threaten or fire employees for standing up for their rights, it sends a message to all employers to moderate their behavior ... so differences can be resolved through negotiations rather than contentious fights."

•Mandate that U.S. steel, iron, cement and other building materials be used on infrastructure projects

•Spend $300 billion on the research and development of electric vehicles, artificial intelligence, and other advanced technology

•Make it easier for unions to organize; hold executives personally liable for their interference with union organizing drives

•Raise the corporate tax rate from 21% to 28%, plus a 10% surcharge for offshoring jobs; impose a minimum tax on all U.S. companies