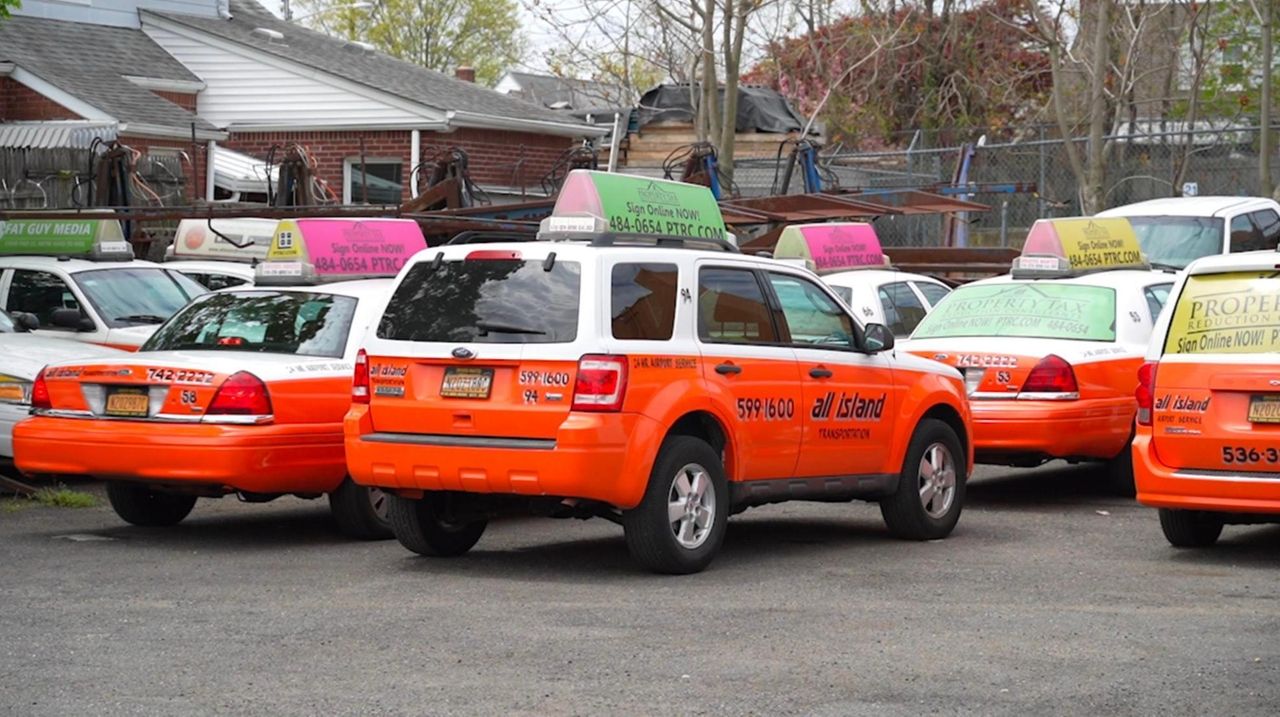 Cab driver Oscar A. Gonzalez says that ridership in his cab is down, especailly at train stations as more people work from home. Credit: Corey Sipkin

Joe Sitaram has put the brakes on driving for Uber.

The West Islip resident used to drive 20 to 25 hours a week for the ride-sharing company to supplement his income as a full-time security guard at a hospital, he said.

But the COVID-19 pandemic put an end to that, as demand for rides dried up for months starting in March last year. By the time Sitaram hit the road again in his Honda Pilot in August, he found himself competing for too few passengers with too many drivers, some of whom had been laid off from their other jobs, he said.

So, he dropped Uber again, finding the gig to not be worth the effort, said Sitaram, 36.

"When you drive you want to hit like a certain average per hour after it’s all said and done. You also want to set aside money for taxes," he said.

Since New York State approved Uber and Lyft to operate on Long Island and upstate in 2017, cab, limo and black car companies have cried foul over growing competition from the ride-sharing companies, whose drivers are independent contractors, or gig workers, who pick up passengers in their own vehicles.

But now, since the pandemic steeply reduced the number of passengers requesting rides to and from Long Island Rail Road stations, airports, bars, sporting events and other spots, those gig drivers are feeling the economic pain, while a growing number of cab, limo and black-car companies -- and their drivers -- are leaving the business altogether.

Uber and Lyft, which New York State categorizes as transportation network companies, or TNCs, declined to provide data about their driver or passenger numbers in the state or on Long Island. The New York State Department of Motor Vehicles does not have data on the number of Uber and Lyft drivers, a spokesman said.

But data and passenger fees collected by a Manhattan nonprofit shed some light on how the companies are faring.

In New York State, passengers of black car and limo companies, and TNCs (Uber and Lyft are the largest) pay a 3% surcharge for each ride. Those companies are required by law to remit those payments monthly to The Black Car Fund, which was created by the state to provide workers’ compensation insurance to for-hire drivers.

Passenger surcharge revenue for black car companies is still down by as much as 80%, while TNCs are down as much as 40%, Morales said.

Long Island cab and car service companies are having to shift their business models to survive.

Last spring, he gave his company’s cars to his 10 drivers, who are independent operators, and began splitting the business revenue with them, giving 80% to the drivers. Doing so allowed him to eliminate some of his costs, such as insurance and maintenance, he said.

"We would be out of business if I kept the cars," said Gelbman, who said his business is still down 90%.

For the same reason, he also closed the Deer Park office he was renting for the business.

Giving away the cars

Like Gelbman, Robert Katz, owner of Huntington Taxi and Airport Services, also gave away his cars, 17, to his drivers last year to try to cut overhead.

"I don’t want to have the fleet on my hands anymore. So, I gave the cars to my drivers. … no strings attached," he said.

He also began the 80/20 revenue split in favor of the drivers.

"We are a ride share. We are not a taxi in the traditional sense," he said.

Customer demand for rides is more local now than it used to be, Katz said.

Before the pandemic, many of the taxi company’s passenger rides were to MacArthur, JFK and LaGuardia airports, as well as to airports in Connecticut, New Jersey and Philadelphia, Katz said.

Now, the company receives more roundtrip-ride requests from passengers who need transportation to take care of basic needs, such as travel to supermarkets, discount stores, drugstores for COVID-19 vaccinations, and fast-food restaurant drive-thrus, he said.

Valley Stream resident Oscar A. Gonzalez, 72, has been driving a cab for All Island Transportation in Franklin Square for five years.

The retired tractor-trailer driver, who receives pension payments, has no plans to stop driving taxis, but he misses the way things used to be.

"I love driving. I love talking to people," he said.

"It’s an industry where you can’t say, ‘I’m going to make X amount of money,’" he said.

Most of the municipalities in Nassau and Suffolk counties issue their own licenses for taxi operations.

Prior to the pandemic, taxi company owners had been struggling in Oyster Bay, Town Clerk Richard LaMarca said. (In 2018, Uber said its busiest drop-off spot was in the town, at the Hicksville train station.)

Things have gotten worse for taxi drivers and companies working in Oyster Bay over the last year.

There were 142 taxi and limo drivers licensed to operate in the town in 2019, compared to 94 in 2020, LaMarca said. As of Monday, there were just 52, and it wasn't clear how many of those would renew their licenses by the April 30 deadline.

There were three taxi companies licensed to operate in the town in 2020, down from nine in 2019, LaMarca said.

So far this year, one company has registered in Oyster Bay, he said.

But LaMarca said he doesn’t think there is a shortage of transportation options in the town, because demand has been so low.

"I think people, as I would be, are reluctant to get into a cab because of the pandemic … as far as the limo drivers go, we really didn’t have the weddings either …they’re getting hit every which way," he said.

The Nassau County Taxi & Limousine Commission issues licenses, which must be renewed annually, to for-hire drivers and businesses operating in municipalities within the county that do not issue their own licenses.

The Suffolk County Taxi & Limousine Commission did not respond to requests for data.

As the economy reopens and demand for rides increases, both Uber and Lyft have said they are having challenges bringing drivers back to their platforms, said Ali Mogharabi, a senior equity analyst at Morningstar who covers Uber and Lyft.

"It’s understandable. It looks like drivers may have more options on the delivery side or they just don’t feel safe in terms of COVID-19," he said.

He had been doing that work since 2017, after losing his full-time sales job, said Krauss, 38.

"I was just able to do it for that extra money that made us more comfortable as opposed to needing it for surviving," the married father of two children said.

With his wife’s income from her full-time job at an advertising agency and his unemployment benefits from the federal stimulus package last year supporting the family, he did not work again until September 2020, when he took a job working from home as a data auditor for an alcohol distributor, he said.

In April, Uber announced $250 million in sign-up bonuses and other incentives to try to attract drivers.

But Uber is more cushioned than Lyft because its business is more diversified, with Uber Eats, Mogharabi said.

Still, Lyft said its ride-share ride volume has been picking back up this year. The second week of March was the company’s biggest week since March 2020, it said.

"We’re seeing big increases in demand for rides, as vaccines roll out and people get ready to start moving again. That’s great news for drivers, who are busier and earning more than they were even before the pandemic," a Lyft spokeswoman said.

Lyft drivers on Long Island are earning an average of $29 an hour, the company said.

There is one segment of the gig driving business that has seen large increases in demand – those who deliver goods, not people.

Restaurant delivery companies DoorDash, Grubhub and Uber Eats, and grocery delivery company Instacart have seen record increases in sales as consumers who are stuck at home or uncomfortable with going to restaurants and stores in the pandemic ordered meals, groceries and other items for delivery via apps.

DoorDash is a publicly traded company whose revenue spiked 226% last year compared to 2019.

The San Francisco-based company declined to give specific numbers on its customers, orders or drivers, but it acknowledged that wait times for deliveries are increasing.

"Due to increased demand and in order to maintain the high quality of service to customers, merchants and Dashers, some customers may temporarily experience longer delivery times and limited availability of stores further away. We are actively working to revert to our standard selection of restaurants as quickly as possible, and recommend customers switch to Pickup if available to see more selection near them while avoiding the wait and skipping the line," DoorDash said.

Instacart saw a huge spike in sales last year as grocery stores were among the essential businesses allowed to remain open throughout the pandemic.

The San Francisco-based company did not respond to requests for comment.

But a spokeswoman for a supermarket chain gave some insight into the impact that Instacart has been having on grocery sales on Long Island.

Stew Leonard’s, a Norwalk, Connecticut-based chain of seven supermarkets, including two on Long Island, received 1% of its sales via Instacart before the pandemic, but that rose to 25% at the peak of the health crisis last year, spokeswoman Meghan Bell said.

"Current sales for delivery via Instacart are over three [times] compared to pre-pandemic," she said.

Before the pandemic, King Kullen offered Instacart in only a few of its 30 supermarkets, said Joseph Brown, executive vice president of Bethpage-based King Kullen Grocery Co.

"We have since expanded our use of Instacart to more stores to cover all of the areas Instacart delivers to in Nassau and Suffolk," he said.