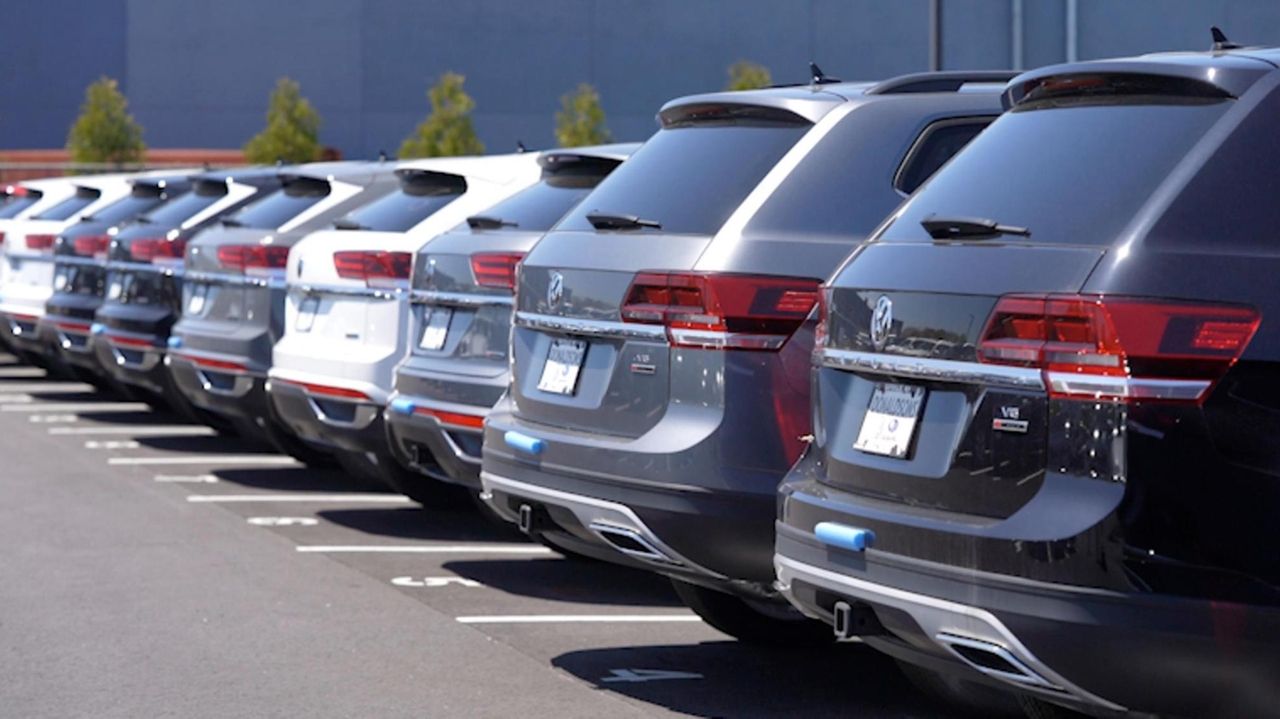 General manager Steven Fulco of Donaldsons Volkswagen and Subaru in Sayville talks about how selling cars has changed during the coronavirus outbreak. Credit: Randee Daddona

New York State residents can once again visit car dealerships and test drive vehicles — as long as they have appointments.

In-person car sales have not been allowed in the state since March 20, when dealerships were among the nonessential businesses ordered to close to help stop the spread of the coronavirus.  Auto manufacturers have been rolling out unprecedented buyers' incentives to help boost purchases amid lagging sales.

Now, New York dealers are hoping for some financial relief since Gov. Andrew M. Cuomo began allowing them to welcome customers to their showrooms again May 6, but by appointment only.

Dealerships should still practice social distancing measures, which means employees are not allowed to be in cars with customers during test drives, customers and employees must wear masks during the visits and the dealerships must sanitize cars before and after each test drive, according to the protocols that auto dealership associations across the state proposed to Cuomo's administration in late April to restart on-site sales.

“It’s labor intensive because you have to have the cars cleaned and it’s time consuming,” but it’s now part of doing business, said Steven Fulco, general manager of sales operations at Donaldsons Volkswagen and Subaru in Savyille.

On March 26, Cuomo authorized remote auto sales. Customers could shop for cars online, negotiate with salespeople via email, phone and text, and go to the dealership only for the purpose of picking up the purchased car. Test drives and showroom visits were not allowed.

Under the new order, "dealers are recommended to continue negotiating sales transactions by phone or electronically, but with this new guidance, customers can meet with a sales representative about purchasing a vehicle at the dealership," according to the Greater New York Automobile Dealers Association, which represents 400 new-car dealers in the metro area.

The car sales industry has been hurt by more than the dealership shutdowns. Many customers can’t afford to buy new vehicles because of record-breaking job layoffs and furloughs amid the pandemic, or they are working but uncertain about their employment security, industry experts said.

In the first quarter of this year, new car registrations on Long Island declined 22.4% to 45,873, according to IHS Markit, a market information service headquartered in London. Data for April is not available yet.

“I hope to see a bounce on it. I think it will make it easier for consumers to talk about a car purchase, even though online sales is becoming more available to people,” he said.

The appointment-only order will allow some dealership employees who had been furloughed to return to work, the auto dealers association said.

Car sales and leasing are down 50% to 70% at Donaldsons Volkswagen and Subaru, but there has been an uptick in business in the past few days, Fulco said.

“I think people are cooped up at home, so they’re online and they’re searching,” he said.

Customers who want to make appointments to come into the dealership are asked to go to Donaldsons’ website to narrow down the cars they want to test drive, so that the process is streamlined when they come to the showroom, Fulco said.

Only one appointment is made per hour, he said.

“All we ask is that when they show up, they’re on time, because we have to practice social distancing,” Fulco said.

The shift to remote and appointment-only car sales that has happened over the past few months has been eye-opening for dealerships, which are seeing that 90% of a sales transaction can be done outside of a showroom, he said.

“And that’s big. And dealers have to embrace that,” he said.

Nationwide, new-auto sales were down about 45% to 50% in April — the worst performance in decades and, possibly, U.S. history — compared with the same month last year, although pickup trucks sold well in Southern and Midwestern states whose shelter-in-place rules were not as strict, said Jessica Caldwell, executive director of insights at Edmunds.com, a Santa Monica, California-based car information website.

The poor performance bodes well for buyers since auto manufacturers are offering unprecedented sales incentives, such as zero percent financing for 84 months, she said. Even as shelter-in-place orders are starting to be relaxed now, the incentives will not go away soon because consumers still need time to financially recover, Caldwell said.

“For consumers out there, they should expect to get a good deal at least until the end of the year,” she said.