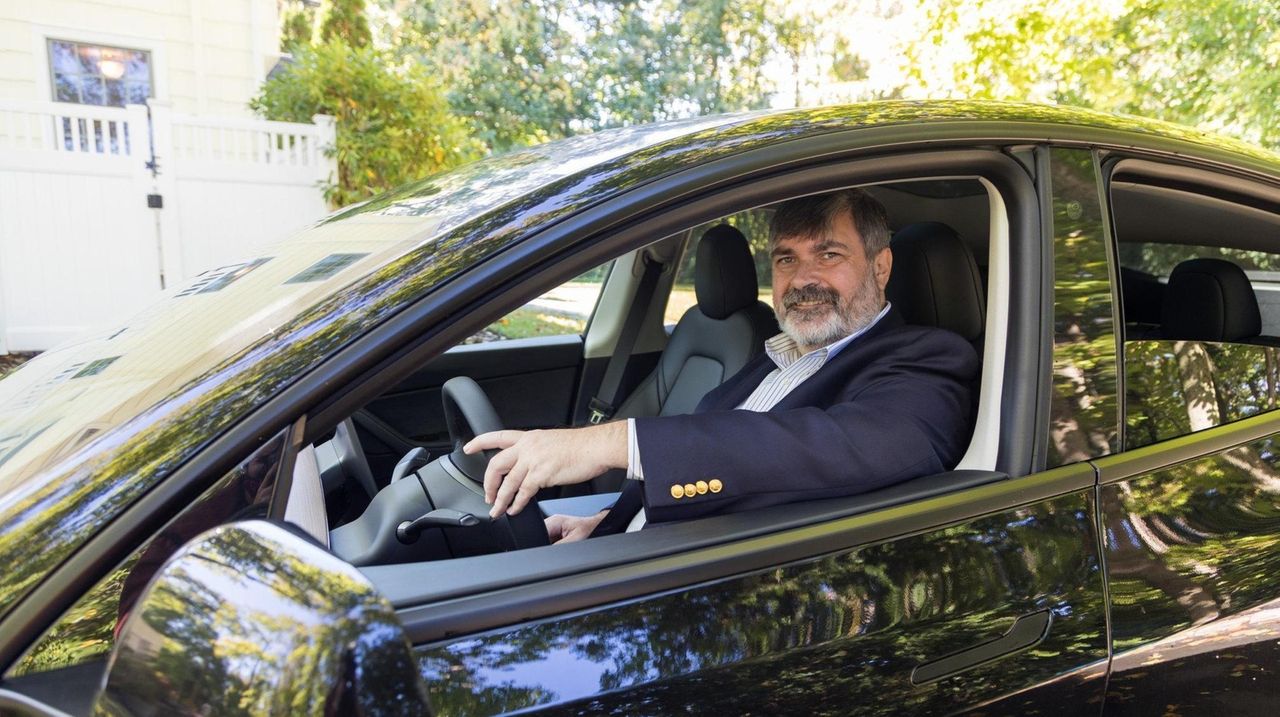 Christopher Ulrich of Syosset spoke to Newsday about how the COVID-19 pandemic affected his family's driving habits and in turn, the money they saved on car insurance by waiting five months to get a second car. Credit: Barry Sloan

COVID-19 lockdowns and expanded work-from-home policies are changing the way people view aspects of car ownership and car insurance, while pushing insurance companies to reevaluate how they do business, industry experts said.

Driving rates nationally went down 28% in the spring, said Kacie Saxer-Taulbee, data scientist at Insurify, an insurance comparison shopping website, and though those numbers may be ticking up as places begin to reopen, various factors could lead to sustained change in driving behavior.

Economic uncertainty, a heightened 7.9% national unemployment rate in September and huge unemployment numbers before that, have meant people are looking for ways to save money on car insurance, including storing one car in multivehicle households, she said.

"People are facing more economic uncertainty now than they ever have before, so that the dual circumstance of having less money to go around and not needing to drive as much because they’re either laid off or working from home, I think has led many Americans to consider canceling their car insurance," she said.

Data is still too early to measure, said Robert Passmore, a policy expert at the American Property Casualty Insurance Association, but there are a few trends that appear to be gaining momentum: buying insurance online and usage-based insurance, which uses telematics to determine how much and how well people drive and reports it back to the insurance company, which rates policies accordingly.

Meanwhile, opting to store one car and keep only comprehensive insurance can save significant money, said Saxer-Taulbee; by her company’s latest estimates, the savings could amount to an average of $300 to $500 a year.

But Long Islanders looking to save some money on car insurance do need to be careful, Saxer-Taulbee and Passmore said. For one, a stored car still needs to have that comprehensive insurance to safeguard it from vandalism, theft, storms and other things that could happen even while it's sitting idly in a garage. Those who choose to cancel their insurance completely will need to surrender their plates to the Department of Motor Vehicles, and if the car is used again, owners will have to pay to get back on the road.

"It’ll cost the average driver in the U.S. $200 for just a 60-day lapse in coverage," between DMV reinstatement fees and lost insurance discounts, Saxer-Taulbee said. And even if you keep just comprehensive insurance, it’s important to not give in to temptation to use the car in a tough spot, Passmore added.

"You have to be wary not to succumb to that," since comprehensive insurance doesn’t protect the driver from liability, including damage to other cars and medical expenses, Passmore said. You can’t say, "Well, we're caught short here today and somebody needs to go to soccer practice, so we’re going to use that car."

A new way to look at a new car

But Sterling's company also saw that car theft went up during the lockdown, meaning that insurance still makes sense, he said.

Additionally, Sterling's personal auto-insurance customers tend to be more affluent and aren’t necessarily storing their cars, he said, but he has seen people not replacing cars when leases expire. Car companies, he said, have not been coming out with as many new models due to COVID-19 shutdowns, so the desire to trade up hasn't been there. When the lease on his own family's third car expired, they didn't replace it, he said. And people in general don't seem interested in newer cars, with automakers reporting a 30% drop in sales in the second quarter compared to the first, the worst drop since the Great Recession, according to CNN Business News.

Christopher Ulrich, CEO and founder of the Melville-based Direct Response Group, a website design and marketing company, said that when he and his employees shifted to remote work at the outset of the pandemic, his family's need for two cars all but disappeared. After the lease for the second car expired in May, his two-driver household waited five months to get a second car, a Tesla. In the process, they saved about $1,000 in car insurance, on top of not having to make car payments.

"Over the last few months, driving dropped a lot, from probably going to the office once a week versus five times a week," Ulrich said. "And we're seeing the same with most people [in my office]. So, we held off buying a car. Originally, we were planning to buy when our lease ended. … And we had one car, which was fine. You're working from the house, so if anybody needed to go anywhere, there was one car available."

Right now, Sterling said, car storage may be a decent solution, but when people begin driving more again — even just a little — they’re going to want their policy to reflect how much they actually use their cars. With many businesses intending to keep at least some of their employees remote some of the time, even if the COVID-19 threat has passed, different driving patterns will need to be included in how car insurance companies view their customers.

"Long-term, there’s going to be a recognition of being charged based on your mileage," Sterling said. "If you’re an insurance company, you’re really going to want to know who you can give these extra discounts to."

In the past, Passmore said, drivers have been reluctant to switch to usage-based programs, either because they felt their driving would not qualify them for a discount, or because they didn’t want their moves recorded. He thinks it's possible that thinking will change.

Penny Hart, president and CEO of TSC Direct, a Jericho-based insurance company, said she’s been interested in the usage-based technology and implementation for years, and has now filed with the Department of Financial Services so that she can try to offer it to her customers at a lower rate, and offer cheaper car insurance than her competitors. It’s pending approval.

TSC Direct, like many other insurance companies, offered a discount at the beginning of the pandemic since lockdown restrictions meant less driving and fewer accidents. For Hart, it was a 15% discount for the first three months of the pandemic. She's currently rating all her drivers as "pleasure" drivers as opposed to work drivers unless told otherwise — meaning they clock fewer miles and get a discount.

"Right now, we're just trying to make sure everyone is paying the right premium, or else we just put ourselves out of business," Hart said.

Driving is down, but it's still a necessity

The Long Island landscape might not lend itself to getting rid of cars long-term or even now, Hart said, and some every-day drivers have agreed. Michael Ceschini, managing member of Ceschini CPAs, in Miller Place, said that some companies, like his own, still require on-site work, making driving integral. Like many people, his driving habits changed at the outset of the pandemic, but have normalized since late June, he said. His employees are back in the office and his client base — mostly construction companies — were shut down for a shorter period than most, since they were deemed essential. Those in similar situations still have to get behind the wheel.

"I don’t know what 2021 will look like, but 2020 hasn’t been drastic yet in terms of changing my views or behavior on car ownership or leasing," Ceschini said in an email. "I think people are being more prudent, but I haven’t, nor have I seen clients, changing their car-buying habits."

Christine Ippolito, founder and principal at Compass Workforce Solutions, a Hauppauge-based human resources consulting company, said she's "just now starting to get back on the road a bit, and I'm not traveling as far as I used to." She's kept her car, but was able to get a 12% rebate on her insurance at the beginning of the pandemic, adding up to $112 saved on a yearly policy that costs around $1,000.

Hart said, based on what she's seen these past few months, that's probably the reality for most in the area. There are certainly places where people can save money, but in a suburban sprawl like Long Island, driving will always be a factor. In some cases, people may even be driving more, she said. Those who do have to commute may not want to rely on public transportation. Leisure travel has also become driving's domain, since many are wary of traveling by plane during a pandemic, and many countries have travel restrictions that restrict American travel in hopes of stopping the spread of the virus. A yearly trip to Europe may instead become a long driving trip to Vermont.

"I’m not seeing a trend of getting rid of cars or anything," Hart said. "A lot of the people we insure are commuters, and people are still frightened of the subways, the Long Island Rail Road … and I don’t see people storing their cars because even people working from home still need to get to Target."

Saving on car expenses during the COVID crisisIf you are driving less, or not at all, there are some things you can do to save on car insurance - but the experts offer cautions, too.