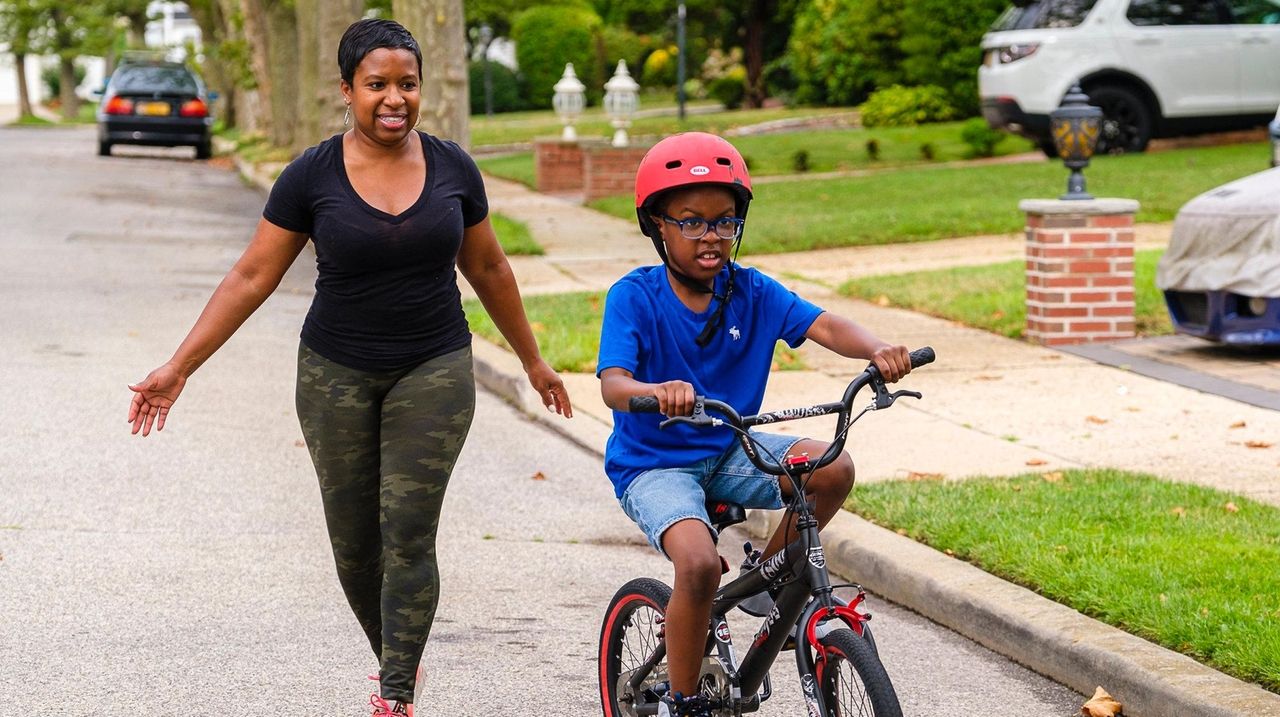 One benefit of the COVID-19 pandemic, says Taquana Johnson, of Baldwin Harbor, is the extra time gained with family now that she's no longer commuting into the city. Credit: Jeff Bachner

Gregg Giannotti used to be an extreme commuter.

Giannotti co-hosts WFAN’s morning show, which in the pre-COVID virus days meant he had to leave his Bellport home at 3:45 a.m. to get to the station’s SoHo studio by 5. The drive back was even worse, often taking 2 1/2 hours in the summer.

No more. Today, Giannotti can roll out of bed, stroll across the hall and be in his home studio in a few seconds. Since he began working remotely in mid-March, he can be pushing his daughter in a jogging stroller by Great South Bay 30 minutes after his show ends.

While much has been made of the travails of working from home — endless Zoom meetings, barking dogs, suspicious managers, kids who need to be home-schooled — not having to commute into the city has been an unexpected boon to many Long Islanders.

According to a study by the Long Island Association, more than a fifth of Long Island workers, 20.5%, commuted regularly into the city in 2017. In Nassau County, 30.9% of residents commuted into the city while 10.9% of those in Suffolk did.

Now, of course, many of them are working from a bedroom, basement or breakfast nook and finding they value the time, money and stress they save from not commuting into New York City. Value it so much that some are hoping to continue working remotely, if even on a part-time basis, once life goes back to what it was in pre-COVID times.

Taquana Johnson, a lawyer at HSBC and mother of three, used to wake up at 6 to get her kids ready for school and then commute from her Baldwin Harbor home into the bank’s offices in Midtown. Though her commuting costs were low because her husband works for the Long Island Rail Road and she gets a family discount, she figures she spent about $15 a day on breakfast and lunch. She also has gained more than two hours a day from not having to be on a train.

“I have a very supportive boss, and I think in the future I can do my job going into the city one day a week, maybe two,” Johnson, 45, said. “Besides saving money, we have so much more family time. We cook together and go on family walks. I taught my youngest to ride a bike.”

$800 a month, including coffee

Alex Petroski, 30, would love to continue to work from home on a full-time basis. Petroski, a content project manager for a subcontractor of Google, used to commute two hours each way from Holbrook to the Google offices in Chelsea, spending more than $800 a month on the train, subway, meals and coffee.

“Really, there’s nothing I do that I can’t do from home,” Petroski said. “I used to be in the office emailing the person who was sitting next to me. I don’t see why it would make any sense for them to keep office space for me. It probably makes more sense for me to be remote.”

Janet Lenaghan, the dean of Hofstra University’s Zarb School of Business, said the sudden move to remote work caused by the pandemic is going to permanently change the workplace.

“There’s no doubt it’s going to have a lasting effect,” Lenaghan said. “Even those employers that were holding onto the belief that face time is the best measure of productivity are going to have to jettison the view that the first person in and the last to leave is the best worker. … The research has shown that giving people the flexibility to telecommute leads to greater employee satisfaction and greater productivity.”

Lenaghan said managers have to be trained to use different metrics of productivity. Johnson said her boss, who has young children herself, already gets that.

“I’m not lying around at home watching TV all day,” she said with a laugh. “If you are producing. that’s what maters. My boss gets it.”

A recent national study by Global Workplace Analytics computed that workers who work half the time at home save $2,500-4,000 a year and gain the equivalent of 11 workdays by not commuting. The study also estimated that a typical employer can save an average of $11,000 per halftime telecommuter per year with the primary savings coming as a result of increased productivity, lower real estate costs, less infrastructure, reduced absenteeism and turnover.

“By offering this, you are giving your employees back two or three hours a day that they would be on a train or a subway or the L.I.E.,” said Moe Vela, the chief transparency officer for TransparentBusiness, a company that produces software for remote workforce management. “This should be just another part of your employee benefit package. The reduction in stress alone makes for a happier, healthier and more productive employee.”

When Laura D’Angelo of North Merrick thinks about the schedule she used to keep, she doesn’t understand how or why she did it. D’Angelo, a licensed psychoanalyst, commuted an hour and 20 minutes each way to her office in the Financial District four days a week.

D’Angelo believes she will eventually adopt a hybrid model, seeing patients in person one or two days a week. She said there are things she misses about not being physically with her patients, but the commute to get to them is not one of them. Technology has helped her keep in touch with a lot of her patients, who have moved out of the area due to the virus. It has also helped her spend more time with her husband, Brian Larkin, who used to commute into Midtown and is now working from home.

“We joke that his-and-her offices have become the new his-and-her closets,” D’Angelo said.

A Gartner Inc. survey of 127 company leaders in June revealed that 82% of respondents intend to permit remote working as employees return to the workplace.

“We definitely are re-evaluating what we are going to do,” said Syosset resident Eric Hornick, a chief claims officer and actuary for The Black Car Fund, a nonprofit based in the Financial District that provides insurance for livery drivers. “I manage about 36 people and we’ve been able to go from a group that was only in the office to a group that is 90% out of the office without missing a beat for the most part.”

Some commuters, however, have jobs that don’t always translate all that well to working remotely.

'Some things software can’t do'

Nitin Gupta, the CEO and president of global fashion manufacturer Maavi Global Inc., used to commute daily from Woodbury to his office in the Garment District. He said the pandemic has hit the fashion industry harder than most, but believes there will be some efficiencies that eventually come from it as there are software programs that can replicate a lot of the design that used to be done in person. Still, there is no substitute for actually seeing a prototype of a garment before it is produced on a large scale.

“A tightfitting, $50 T-shirt still has to be fit on a model with designers coming in,” Gupta said. “There are some things software can’t do.”

At HSBC, there are tellers and others inside a bank who are essential workers and never had the opportunity to telecommute, Johnson said. She also said there are aspects of her job, notarizing documents for directors, where she really should be in an office at least one day a week.

As much as Giannotti likes doing his show from his spare bedroom, he believes they eventually need to move it back to the studio, where he can physically be with his broadcast partner Boomer Esiason.

“It took about three weeks, but we were able to develop a chemistry working remotely,” Giannotti said. “We’re back on TV and can see each other on Zoom. Still, sometimes you can see the energy is a little different. It’s not the same being in the bedroom of your house as it is being in a studio.”

Giannotti also admits there are some things he actually misses about his long commute.

“There is a pride factor, and I feel a little soft right now,” Giannotti said. “Part of me really does miss waking up with the purpose and pride of doing this to make a living in this city. There is something to be said about being in the car by yourself if you are a creative person. If they told me you are never coming back and you are working from home, I would be a little bit sad about that."

This is how much time and money Alex Petroski saves by not commuting from Holbrook to Chelsea: