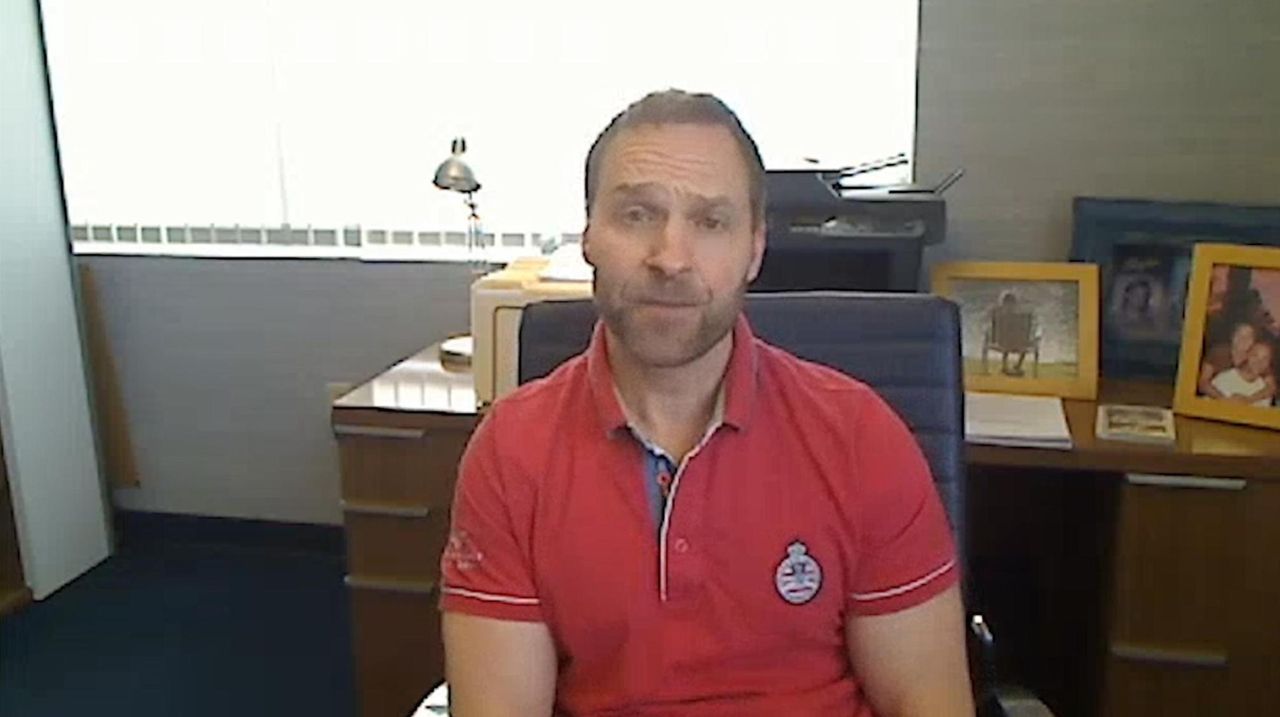 When the coronavirus retreats, workplace norms will likely have changed enough to reshape the office market in ways that are not yet clear, according to human resource specialists and commercial brokers. Rob Basso, CEO of Associated Human Capital Management, says he plans to make telecommunications part of the business's post-pandemic routine. Credit: Newsday / Sarina Trangle

When the pandemic ends, some companies will have so many telecommuters that they may reserve offices for essential gatherings. Others may spread their teams across smaller satellites — or redesign spaces to put more distance between workers.

With companies requiring staff members to work from home, staggering shifts and taking other steps to socially distance, the coronavirus has already upended workplace conventions. Human resource specialists and commercial real estate brokers predict these shifts will outlive the pandemic and shape the Long Island office market in ways that are just beginning to emerge.

“When the vaccine comes, and the testing comes … and you’re ready to resume what you would have considered your normal operations, I don’t think those normal operations will look the same,” said Janet Lenaghan, dean of the Frank G. Zarb School of Business at Hofstra University. “You’ll see different configurations of office spaces.”

The growth of telecommuting will likely factor into companies’ plans, HR specialists said. CEOs like Rob Basso, of Associated Human Capital Management, have discovered staff perform well at home and that keeping them there may reduce their real estate spending.

Before the pandemic, Basso planned to stop leasing his Plainview office to other companies when his firm grew large enough to need the space. Now Basso envisions having his staff in the building half as frequently and permanently renting out space to other businesses.

"I don’t want it to just cover my mortgage; I want to create income from it," said Basso, 47, of Huntington. "Others that have space like mine and some of the big real estate groups are going to start thinking about this. … It could impact the commercial marketplace."

Companies may invest less in traditional offices and more in tools that ensure employees can work well at home, according to Sy Islam, vice president of consulting for Talent Metrics, a Melville-based management consulting firm.

“I have a feeling the investment is going to be more on the home side … building a special office space for them that will have a green screen for their Zoom meetings or something along those lines,” said Islam, 41, of Farmingdale.

In early April, more than 34% of employed Americans noted in a survey that they had transitioned over the prior month to working from home, with the greatest shift — 40% — occurring in the Northeast, according to an analysis from Massachusetts Institute of Technology researchers.

HR departments and c-suite executives are discussing how to capitalize on telecommuting without disrupting their company culture, according to Lenaghan, a professor of management at Hofstra. But new work-from-home policies will likely have less impact on future office spaces than the pace of scientific advancements, she said.

“If we are at a place where social distancing becomes kind of our norm through all of next year … you might actually see them needing more office space,” said Lenaghan, of Oyster Bay.

After watching Chinese companies return to the office, the global real estate services firm Cushman & Wakefield began finessing an office design that incorporates best practices for keeping occupants safe. The firm's 6 Feet Office prototype suggests color coding floors to show people when they are within six feet of colleagues' work stations, installing plexiglass between desks and improving air filtration systems. About 70% of the vision involves spending nothing, but instituting protocols like walking counterclockwise around the office and covering desks with fresh paper every morning, according to Bruce Mosler, chairman of global brokerage at Cushman & Wakefield.

"We are talking about de-densification," said Mosler. "Those companies that did invest in the technology, the cloud technology, will be using the remote workforce to offset [what] will be, in our view, an increased cost in having to take more space to accommodate your employees in a safe way."

Some businesses may reconsider large headquarters and start stationing workers in smaller, relatively distant offices because companies that concentrate their staff in one location are more vulnerable during pandemics and regional disasters, according to Darren Leiderman, executive managing director of the Jericho office for the real estate services firm Colliers.

"People are saying that maybe it will be better if there is a localized event," Leiderman, of Port Washington, said of local COVID-19 outbreaks and other challenges.

When the pandemic struck, the Nassau office market had an 8.9% vacancy rate, and the Suffolk office market had a 10.3% vacancy rate, according to data from the real estate services firm CBRE that covers the first quarter of 2020, during which COVID-19 was largely not a factor. A limited number of Class A office spaces has helped keep demand steady and vacancy rates hovering around 9% islandwide over the last several quarters, according to Scott Berfas, a managing partner of the commercial real estate advisory firm Newmark Knight Frank's Long Island office.

"The new normal will have some positive impacts, some negative impacts," said Berfas, a Syosett resident. "We still need to see how it shakes out."

But in the current economic climate, it is unclear how many companies will opt for such expensive strategies, according to Allan Cohen, managing partner of Nixon Peabody LLP's Long Island office.

"If companies are concerned that we're headed into an economic downturn, one of the last things that they're going to do is expand the amount of space that they're taking," said Cohen, a Syosset resident whose team handles real estate, finance and other legal matters.