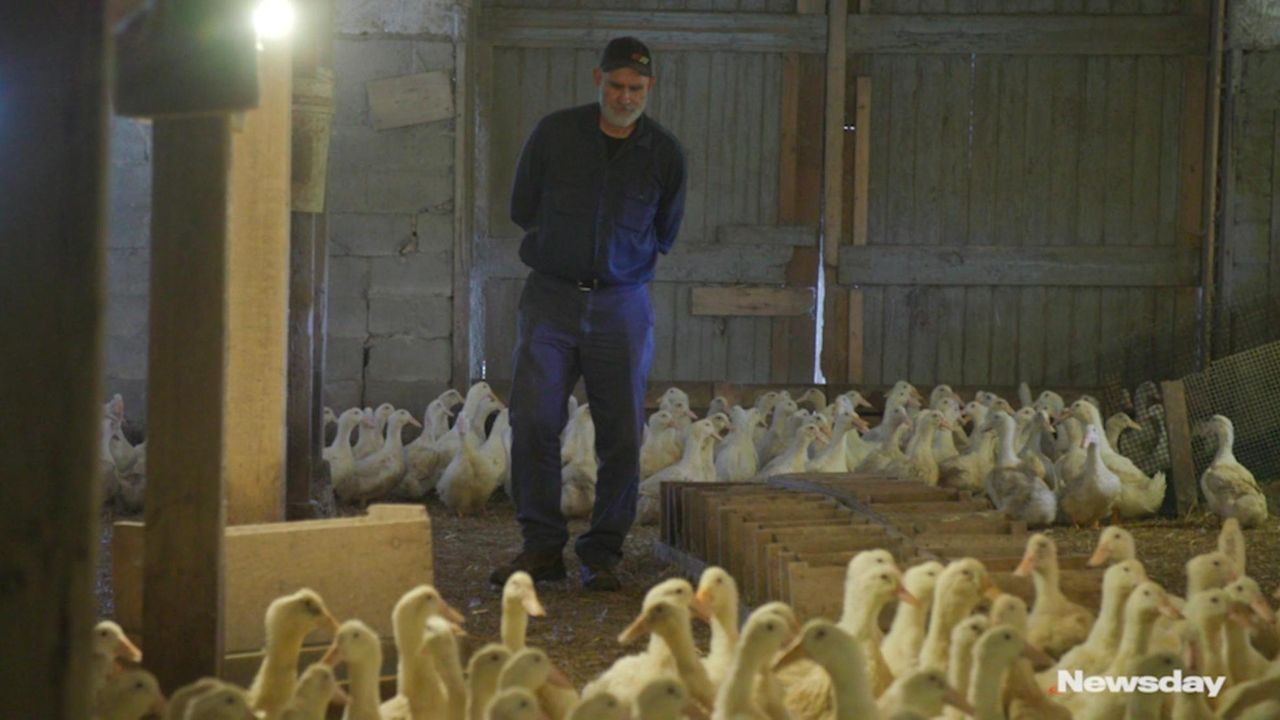 Despite setbacks from the pandemic, Crescent Duck Farm president Doug Corwin was determined to set up his family farm for the future. He invested $3 million in a new hatchery that will open in September. Newsday's Steve Langford reports. Credit: Kendall Rodriguez

Crescent Duck Farm president Doug Corwin wasn't about to let one of the most crippling downturns in his family's 113 years of business stop him from a plan to ensure the company's future by opening a modern hatchery.

So even after COVID-19 lockdowns forced him to euthanize thousands of ducks, idle nearly all his employees and suffer a steep decline in sales, he continued work on a five-year plan to build the facility on his 145-acre Aquebogue farm, one that will serve the company well into the next generation. Corwin’s sons, Blake Corwin, facility manager, and Pierce Corwin, farm manager, work alongside him.

The new hatchery, with a price tag of around $3 million, is scheduled to open in September. It will nearly double the farm’s capacity to around 35,000 hatchlings a week, while automating temperature control and air circulation and vastly improving its sanitary systems.

"We bit the bullet and are trying to do something right as far as building something," Corwin said of the hatchery. "I don’t have any short-term dream of growing more ducks but now I’ve got something for my kids to take into another generation where they won’t have to worry about it."

Corwin broke ground on the facility in November 2019, just as revelations about a deadly new virus had begun to circulate in Wuhan, China.

"I had broken ground and the steel had arrived and we were starting to erect the structure and COVID hit," Corwin said.

By March 22, New York State was officially in lockdown.

"Here I have this foundation and the steel up and a large down payment made on the incubation equipment," and construction on the facility had to stop, Corwin said, and he had to temporarily lay off nearly all his 85 employees.

Work resumed at the facility after the construction lockdown was lifted last summer. Sales have since recovered to about 70% of pre-pandemic levels.

The worst impacts of the pandemic were eased by federal and state assistance programs. Crescent received loans from the federal Paycheck Protection Program funds, and a near doubling of its low-cost power allotment from the New York Power Authority's Power for Jobs program.

Corwin said that building a new hatchery wasn't just an investment in the future; the current hatchery is outdated and was in need of replacement. "It’s not as sanitary as it should be and at times its capacity is constrained. The machinery is from 1984, which in this industry is way outmoded. The machines are broken down."

Work at the facility is nearly complete, Corwin said, with mobile racks and incubator rooms filling up with equipment. Electrical contractors were putting the finishing touches on the considerable electrical work that underlies the operation.

And while business has recovered from the worst of the pandemic, there are new challenges. Prices of nearly every aspect of his business have gone up, Corwin said. He uses 100 tons of corn a week to feed the 20,000 ducks he processes each week at peak production times. Corn, just one component of the feed for his ducks, now costs over $8.20 a bushel, compared with $4.20 a year ago, Corwin said. Increased costs for cardboard, plastic, labor and other expenses have led him to raise his prices for the first time in five years — a 15% increase.

Crescent wasn’t profitable in 2020 and doesn’t expect to be this year either, but Corwin has higher hopes for 2022. "Thank God I have reserves," he said, to cover costs as sales slowly rebound. "We’ll use them up and keep pushing forward."