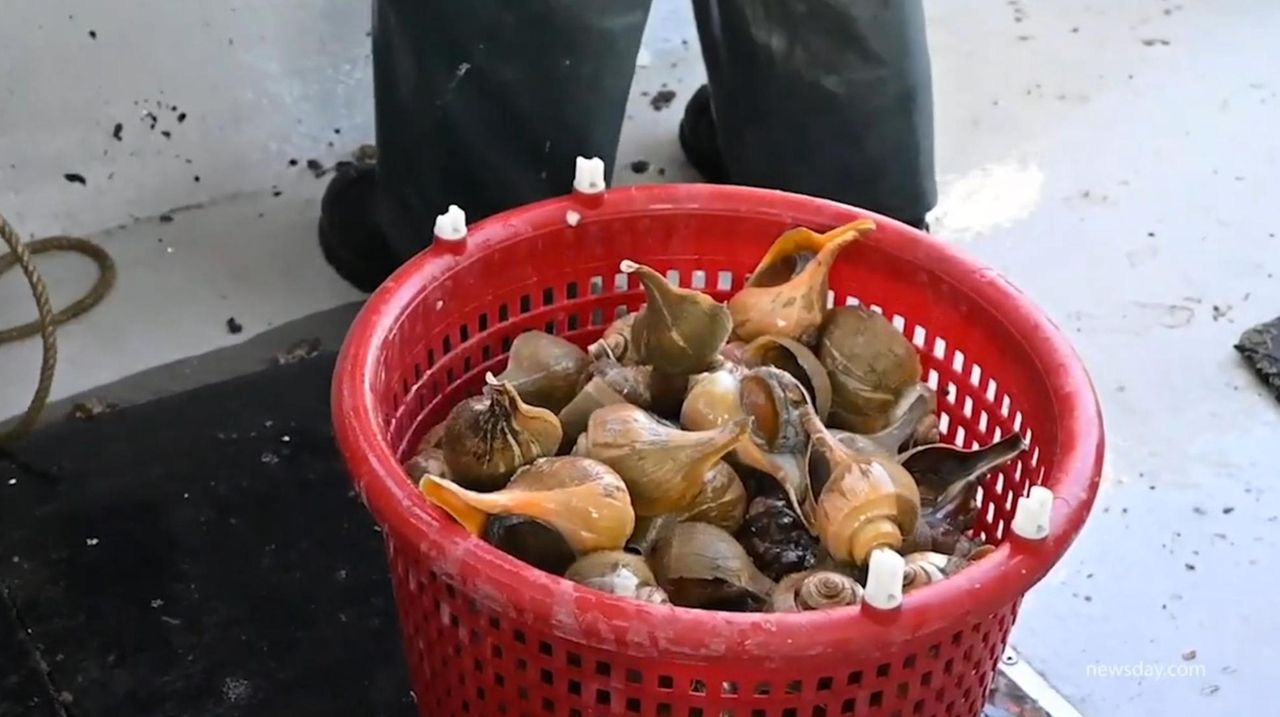 With New York City restaurants back in lockdown, Long Island fishermen once again face the loss of one of the biggest markets for their fish as a choppy 2020 comes to a close.

A small measure of relief is being offered with federal stimulus finds, but fishermen have only till year's end to apply.

Fishermen in the spring saw most wholesale prices tumble with restaurant closures statewide, then regain as summer opened outdoor dining and limited capacity at restaurants. The latest closure comes atop other setbacks, including the die-off for the second year in a row of Peconic Bay scallops, the sharp decline in the oyster industry, also tied to restaurant closures, and pressures such as ever-changing fishing quotas.

The state this month is encouraging fishermen and others in the industry to apply for $6.7 million in COVID-related aid available. The money, from federal CARES Act funding, will run out by Dec. 31, when applications must be filed.

Hank Lackner, who operates the state’s largest commercial trawler, a 93-foot dragger out of Montauk, said he’s already applied for the relief.

"It’s been really tough," said Lackner, adding his revenue is down 40% to 45% this year. "It’s only going to get tougher," with city restaurants in lockdown, and talk of a bigger statewide pause in January.

Lackner said applying for assistance is "one of the last things you want to do as a fisherman," but "right now we’re looking at one of the worst years we’ve ever had, just a disaster." All his crew members saw drastic cuts in workdays and pay, while prices for squid, his primary market, are half traditional levels.

New York's marine industry, chiefly on Long Island, supports nearly 350,000 jobs, according to the state, and represents billions of dollars of revenue from sales of everything to boats, fishing gear, wholesale and retail fish and tourism. It's one of Long Island's oldest and most homegrown industries, with nearly $40 million in sales of wild-caught fish and shellfish from local waters, though the number of commercial fishermen has declined over the years, and their average age has crept well past 50, according to the state.

The state Department of Environmental Conservation, which is administering the CARES Act program with the Atlantic States Marine Fisheries Commission cutting checks, said it’s received thousands of inquiries about the grants but only around 50 applications as of last week.

Jim Gilmore, director of the DEC’s marine resources division, said while pressures on sectors such as bay scallops and oysters remain, there were glimmers of hope during a meeting this month to review fishing quotas for 2021. There was a slight increase in the quota for fluke, for instance, even though blue fish quotas are expected to see some reductions.

Gilmore said the state would review the prospect of once again declaring the bay scallop fishery a disaster.

Stephen Tettelbach, a marine ecologist for the Cornell Cooperative Extension, said this fall’s harvest has been, as predicted, "very low … The baymen are hurting from this. It’s been two years in a row."

One of those baymen is John Kotula, who fishes for conch, black sea bass and bay scallops from Shelter Island. He said his fall and winter income from bay scallops has tanked, the harvest just about enough to provide a "couple of dinners" for his mother, after two full days of scalloping. Loss of scallops two years in a row was "kind of a blow," he said. "I used to always sell a lot of scallops around Christmastime."

The DEC’s Gilmore said that despite pressures, fishermen on Long Island largely met "most of our quota" for 2020 allotments, indicating they kept fishing and found markets for the fish. "Even though markets got interrupted in spring, there seems to have been a recovery," he said. "Based on landings, we don’t have a significant surplus." And, he noted, recreational fishing "took a major increase," in part because lockdowns led many to turn to sport fishing for relief. The state opened up party and charter-boat fishing in May, with procedural restrictions such as lower capacity and mask wearing, but boats were frequently on the water. "Recreational fishing saw a major increase," Gilmore said. "Under COVID, that was one of the things you could do, go out fishing."

A proposed reduction in next year’s blue fish quota is based on findings that the species is overfished, but Gilmore and fishermen said it’s possible blue fish have migrated farther offshore with changing weather and water temperature patterns. One fishermen has requested the state allow bigger offshore boats to land those fish.

Lackner, the trawler captain, implored the DEC to open up blue fish quotas more in the last quarter of the year, because he sometimes encounters the fish on weeklong trips to the south. Currently, the quota is 1,000 pounds for a weekly trip, when Lackner said it should be around 5,000 pounds. "We’re seeing them in spots we never saw them before," he said. The limits "are not adapting to changes we’re seeing in the ocean."

Gilmore noted the long decline of lobsters in the Long Island Sound largely continues in the western part of the water body, but some, like Montauk lobsterman Al Schaffer, continue to work the water, with success.

This summer "was the best lobstering I’ve seen since the late 1990s," Schaffer said Thursday. He fished off the far eastern end of Long Island Sound, beyond Orient Point.

Lobsters aside, Schaffer said, his overall year in fishing is "off by a lot." He also operates a commercial trawler, and relies on the sale of black sea bass and fluke for the balance of his revenue. "Dragging was almost a waste of time this year," with sea bass prices down to under $2 a pound from a normal $5 to $7. He said he was happy the DEC announced this year that it’s opening the commercial season for sea bass on May 1, rather than May 7 or 15, and he’s hoping restaurants are open by then.

Those who’ve turned their lobster boats and traps to harvesting whelk, commonly known to fishermen as conch, will likely see first-time size limits on the species. Gilmore said the state is considering minimum size limits for whelk of 5.5 inches in length and/or 3.5 inches in width. The fish, once considered a predator that fishermen were not allowed to return to the water, now are a staple for Long Island fishermen, and licenses are prized.

Peter Wenczel, a longtime whelk fisherman from Southold, said he strongly supports the move. "I’ve been begging the DEC to do it for 10 years," he said of size limits, noting that he already throws back any whelk under 5.5 inches. "Clearly if you take all the little ones you won’t have any big ones. It’s that simple."

One way fishermen managed to continue through 2020’s broadsides was to market and sell fish themselves.

"People were selling off boats," Gilmore said, noting that fishermen needed federal permits to do so. The DEC didn’t restrict it. "We’ve been watching it, and this year we’re kind of allowing it, but if it continues next year we may have to track it," he said.

Horseshoe crabs will continue with last year’s quota of around 150,000 crabs, even though the harvest was considerably less at around 119,000 crabs as of early December, fishermen and regulators said. Long Island researchers say they’ve seen an increase in the population this year, likely because the state in 2020 instituted new limits on harvesting the crabs during key spawning time on area beaches.

Populations of horseshoe crabs in the western waters of Long Island are in "poor shape," Gilmore said. That may be due to the fact that New Jersey has shut down its horseshoe crab harvest, but its fishermen still need the bait. "We think a lot of our excess harvest may be going out of state," Gilmore said.

Fishermen like Phil Karlin of Riverhead use horseshoe crabs for bait, buying it frozen and hacking the large, helmet-like shells into quarters to bait conch pots. Horseshoe crabs are also used to catch eels.

"There are other groups trying to shut our [horseshoe crab] fishery down," Gilmore said. "That drives the price up and leads to more poaching."

Most Long Island fishermen who harvest horseshoe crabs do so for their own needs; a summer haul can provide a year's worth of conch bait. Blue Point fisherman Tom Gariepy said he’d like the DEC to increase the daily limit to 200 crabs from 150.

If 2020 was a banner year for any fish it was menhaden, also known as bunker. The small fish that travel in massive schools remained abundant in Long Island waters through the year. This year’s harvest was 3.8 million pounds.

But Long Island oyster farmers had a particularly difficult 2020, due almost entirely to restaurant closures, said Steven Schnee, owner of Founders Oyster Farm in Southold, who said he has applied for the CARES Act assistance.

"It was a rough year, no question about it," said Schnee, noting sales were off by 50% to 75%. "The restaurants we sold in the past were not doing much with oysters."

Business did pick up in the summer as restaurants opened outdoor dining, and Greenport, which vastly expanded outdoor dining on its main streets, "did a spectacular job. It gave us some life support." But as the weather gets colder, Schnee noted, "it’s going to be tough again, especially with New York City restaurants in lockdown."

His only concern now that a vaccine is being rolled out is that it may be "a little too little too late for a lot of restaurants."

Have a valid NY license or permit from DEC

Be a commercial harvester, for-hire boat, marine aquaculture or dealer/processor/wholesaler

Show a 35% or greater revenue loss tied to COVID-19

Show “active” participation in fisheries this year, and documented history