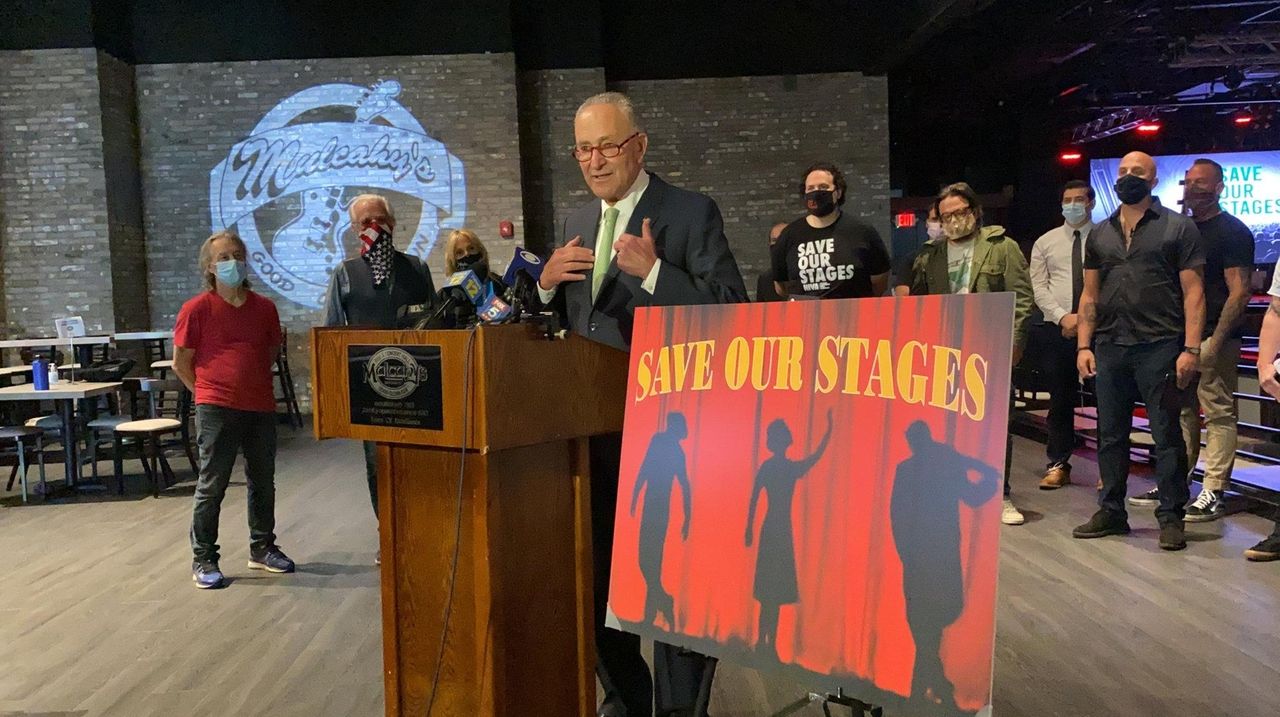 Sen. Chuck Schumer on Monday gathered with musicians at Mulcahy’s in Wantagh, calling for federal aid to help live venues. The “Save Our Stages Act” seeks to help venues, like concert halls and theaters, stay afloat amid the coronavirus pandemic. Here is Newsday's Cecilia Dowd. Credit: Howard Schnapp; File footage

The vast majority of Long Island’s live venues could fail in the coming months if the federal government doesn’t step in to bail them out, Sen. Chuck Schumer and a number of industry leaders said Monday in a news conference pushing for legislation that would provide financial relief.

Schumer’s bill, called the Save Our Stages Act, seeks $10 billion in government grants to live venues around the country, including comedy clubs, concert halls and music festivals. The bill, which Schumer said has bipartisan support, would allow large venues, like Broadway theaters, to ask for up to $12 million in relief.

The executive director of the National Independent Venue Association, who goes by Rev. Moose, said that of its over 2,000 members, 90% said they would likely be forced to fold if there is no relief in the coming six months.

The "enormous overhead'' of these venues put them in danger, Rev. Moose said at the news conference, held at Mulcahy’s Pub and Concert Hall in Wantagh. "We’re at the precipice of that disaster, with some venues having already closed."

"The first places to close during COVID and the last places to open will be places like this," Schumer said of Mulcahy's. His bill could be part of the next COVID-19 relief package or a budget bill, his office said.

Schumer was also joined by Long Island-based music acts, including members of Taking Back Sunday, Blue Öyster Cult, Violent Joy and Michael DelGuidice of Big Shot — many of whom have been active in the effort to save smaller venues. DelGuidice headed a protest last weekend asking the State Liquor Authority to amend certain restrictions for live music venues — currently, live music can only be incidental to the dining experience, and venues such as Mulcahy’s can’t charge for the music itself, only food and drink.

Shaun Cooper, the bassist for Taking Back Sunday, said the band used small venues as a "proving ground," adding that a huge part of the music industry will be negatively impacted by not having a space to develop and perform.

"If we lose these venues, we not only lose a part of the past, but it’ll certainly have a devastating impact on our future," Cooper said. "My kids love to play rock star, just like me and [drummer] Mark [O’Connell] did. Where will their bands get to cut their teeth if we let these venues go under?"

On-stage talent, Rev. Moose noted, aren’t the only ones to suffer. Those in charge of lighting and sound, along with bartenders and security staff all get put out of work when venues don’t hold live events. At Mulcahy’s, the staff has been reduced from around 100 to 16, said owner John Murray Jr., and it's among the lucky ones that can still rely on some sort of food service. Other places, like Revolution Bar & Music Hall, in Amityville, closed its doors for good this month.