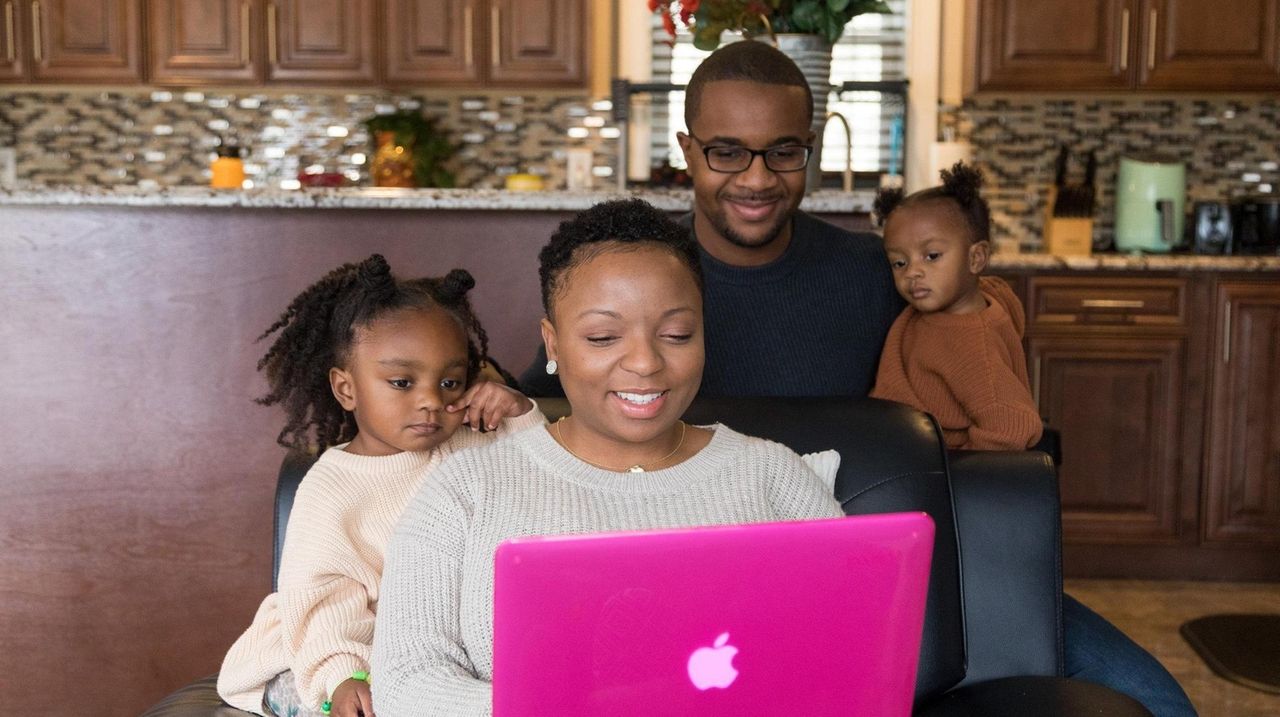 Aubergine Food Truck, based in Plainview, and Cozy N Cute Kids Boutique in Middle Island are two of the many companies which, despite being in the middle of a pandemic and economic crisis, have opened for business on Long Island. Their founders spoke with Newsday on Dec. 23 and Dec. 28. Credit: Corey Sipkin, Barry Sloan

In Nassau and Suffolk, 20,157 firms submitted business formation forms to the state from March to October — the most recorded during the same stretch of the past five years, according to New York's Department of State data. The data provides a sketch of business creation, since companies may register in a different county than they operate in, experts said.

Across the state and country, the federal government fielded a record number of requests for employer identification numbers, which are required for businesses with employees and may be used by sole proprietors and independent contractors. The U.S. Internal Revenue Service received 1.57 million EIN applications, including 91,316 from New York, during the third quarter of 2020, the most recent period captured by U.S. Census Bureau data.

"Nine months is a long time to wait around for a job," Newbert said of those who became unemployed early on in the pandemic. "My guess is that what you're seeing is, at least in part, related to these necessity-based entrepreneurs that just ran out of options. They have to do what they can to make ends meet."

At the same time, Long Islanders who still have steady income may have been pulled into entrepreneurship by the allure of new opportunities, such as the need for face masks and webcams, he said.

The pandemic prompted local entrepreneurs to reflect on their priorities — and provided many with time to act on them. A Middle Island mom found time to launch an e-commerce company when her social work transitioned from field visits to phone calls. A Lynbrook woman fixed up an aquatic center and started a swim school with help from her husband while he was unemployed. And a Melville man forged ahead with plans for a food truck as a way to show his children the importance of persistence.

"People are calling me and saying … I have a taste of freedom, and I don't want to go back to the corporate rat race," said Tom Scarda, founder and CEO of The Franchise Academy, which helps people launch franchises.

Life without a commute

Priscilla Wesson of Middle Island wanted to start a business by 30. Working from home during COVID-19 helped the former social worker achieve this goal.

With the two to three hours a day she saved by calling rather than visiting clients, Wesson started researching business ideas, and settled on an online children's clothing shop. She knew parents would be reluctant to lug their kids to stores during COVID-19, and that the industry would offer her a flexible work schedule. E-commerce was also a way to engage her daughters — Jade, 3, and Iris, 1, who love fashion.

Wesson used her paychecks to get started, paying roughly $30 a month for access to the e-retailing platform Shopify; buying a web domain; and placing online ads. She learned about digital marketing, connected with vendors and sampled items. Wesson finalized her paperwork in late May and debuted Cozy N Cute Kids Boutique June 1 — months before her 30th birthday.

"I really couldn't have imagined a more perfect time to launch my business," said Wesson, who is Black, and has noticed a shift toward patronizing Black-owned businesses after the killing of George Floyd energized the Black Lives Matter movement. "People were really starting to be more conscious of how they're spending their money."

Wesson said orders have climbed from a few to about 100 a month, amounting to about $4,000 to $5,000. Cozy N Cute is currently among the top 1% of trafficked stores, when compared to those that were also launched on Shopify in early June, Wesson said.

In October, she stepped down from her job and focused on the boutique full-time. Her husband, Isaiah Wesson, sells technology products to businesses, but he would be her first hire if she expands, she said.

"Once I started getting sales, it started just funding itself," said Wesson. "So that was pretty cool."

In late 2020, she was among eight metro area entrepreneurs invited to pitch their businesses to Black Girl Ventures, a national group dedicated to funding businesses run by Black and brown women. Wesson took second place and received some money; she said Black Girl Ventures does not like to disclose precise figures. The funding helped her purchase items in bulk. She is currently applying for grants and business accelerator programs designed to assist new businesses.

This year, Wesson plans to reduce shipping times by sending items to customers, as opposed to having vendors mail them. She will start off by storing products in her basement, but is hunting for warehouse space. Wesson is also working with vendors to roll out attire she designed, which she described as building on Cozy N Cute's fun looks featuring bright colors, rainbows and animals.

"It's going to help give us more control over the brand identity," Wesson said.

The store offers attire for infants to size 7T in the United States, Canada and the United Kingdom. The items, which go for about $15 to $40, are a big hit with Wesson's daughters.

"My kids actually help me pick out clothing for my site," she said. "They're my models. They absolutely love it. … They really think they're celebrities already."

Sherif Ishak, 45, of Melville, is taking a slow approach to street food.

After decades in the hospitality industry, Ishak left his job at a catering company about three years ago to focus on setting up Aubergine, an Egyptian street food truck. COVID-19 made finalizing paperwork more complicated, so the truck debuted a little later than anticipated. But Ishak said moving forward was an important way to model resiliency for his two daughters.

"We didn't lose hope. We said we're going to finish the project," Ishak said. "We have to do something because of the kids."

In early May, Ishak fired up what he believes is the only Egyptian food truck on the Island.

"Everybody knows falafel," Ishak said, noting that he offers many dishes that may be less known on Long Island. "We want the people to see our culture."

The truck’s namesake eggplant is a prominent part of the menu, Ishak said. Prices range from $2 to $15.

Ishak spent months researching equipment and recipes. His wife, Haidy Ishak, gave dishes to colleagues at a catering company where she worked until COVID-19 hit, and noted their reactions.

Ishak dedicated eight months to outfitting a truck that met local plumbing, electric and other codes. "I know every screw in this truck," he said. He used money from his bank account to fund the venture, but declined to share his budget.

Ishak declined to provide sales estimates, noted that traffic varied depending on the weather, holidays and other scheduling matters. He is careful to maintain a safe social distance, use sanitizers and take other precautions to fight COVID-19, but said concerns about the pandemic seem to be holding some customers back.

"People are still afraid to come," Ishak said, noting that he is focused on the longer view. "To build the reputation of the truck or the business, it doesn't take one day or one week — that takes at least one year."

Ishak urges customers to check Aubergine’s social media and call in advance, so they know where to find the truck and what specials are on the menu.

"We cook fresh," he said. "So the food comes directly from the grill to you."

Marx-Epstein, 67, and her husband, Dan Epstein, 56, were friendly with the owner of a building on Sunrise Highway in Rockville Centre. When Swim and Scuba Long Island, the aquatic business that had been operating there, closed, the owner decided it would be difficult to sell an indoor pool and approached the pair about leasing it, they said.

Marx-Epstein, a swim instructor with two decades of experience, wanted her own school for years, but struggled to secure an indoor pool. Epstein had been out of work since late 2019 and had experience maintaining their outdoor pool.

"It was an opportunity," said Epstein, who recently began working remotely in information technology in addition to his role at the aquatic school. "We could make a go of the place."

The couple used roughly $50,000 in a 401(k) to start Swim Stars Inc. They deep cleaned, painted, set up a larger party room and spruced up the parents' waiting area.

"In a four-month period, we’ve had to create a business," Marx-Epstein said. "Get the corporation opened up, and get insurance, and do all the basics."

Since November, the school has been offering private, semiprivate and group lessons for people of all ages and abilities, as well as aerobics and aquapole — pole-dancing style classes in the pool.

Prices vary, with a six-course fitness class costing $110 and six private swim lessons costing $330. Swim Stars Inc. offers an annual membership for $125, which includes a 10% discount off courses and gear and an extra half-hour of swim time before and after classes.

Epstein said no coronavirus cases have been traced to aquatic centers — a statement confirmed on the U.S. Centers for Disease Control and Prevention's website, which notes that standard disinfection with chlorine or bromine should "inactivate" the virus. But the business is taking several precautions, including taking temperatures, limiting class sizes and separating seats in the waiting area with plastic sheets.

Many of Marx-Epstein’s former students have followed her to Swim Stars Inc. Beyond word-of-mouth and social media, she has gotten new pupils by leaving flyers at a nearby outdoor playground. The school has more than 50 students and seven employees, Marx-Epstein said.

"Some of this stuff is paying off a little bit," she said. "Slowly, but surely, people are starting to see us."