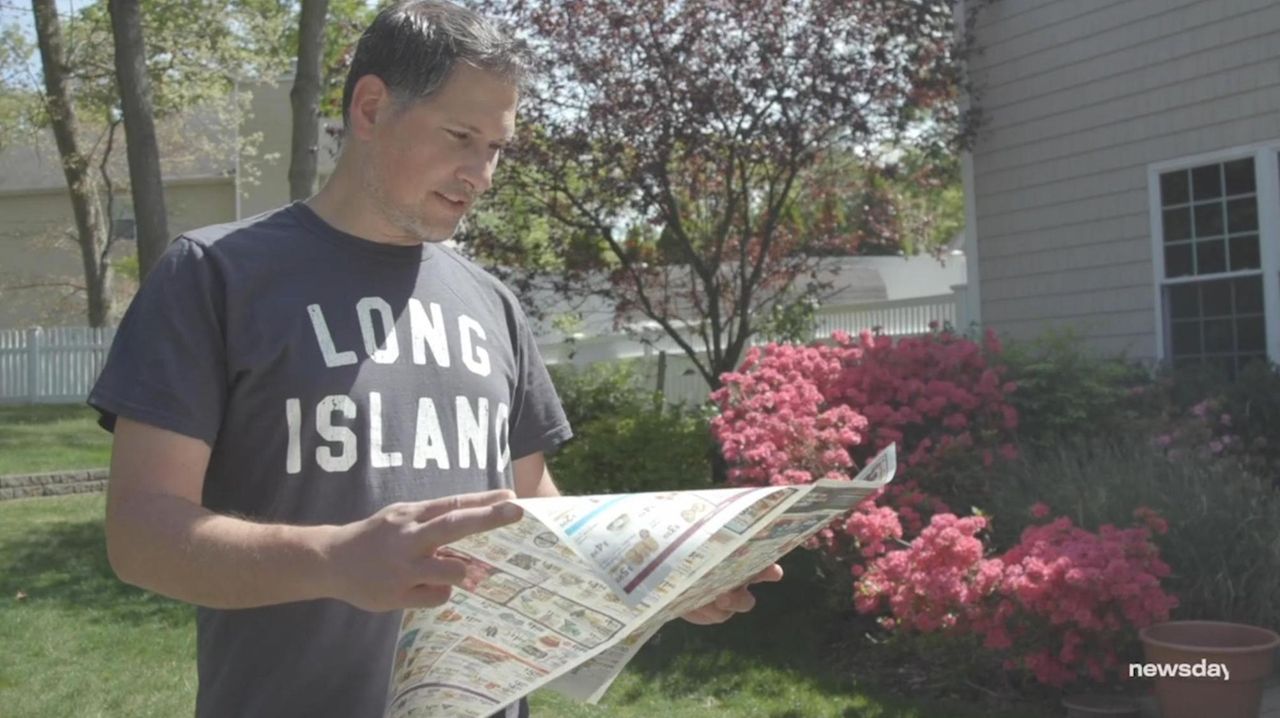 Scott Boudin, of Old Bethpage, says he is always on the hunt to find the best food shopping deals online and in print. Credit: Kendall Rodriguez

Supermarket prices are surging, and even the most sales-conscious Long Islanders say they cannot avoid bigger bills.

Despite the inflation rate falling 0.5% in the metro area, food prices grew 2.6% from March to April, which marked the largest jump in the U.S. Bureau of Labor Statistics' food index in more than 30 years. Prices rose more dramatically — by 3.6% — when excluding restaurants and examining supermarkets alone.

Year over year, all metro area prices have increased 1.1% this April over last, but the index for groceries climbed 4.8%, data shows.

“I usually don’t spend this kind of money on groceries,” said Erica Azzara, 37, a Massapequa resident who has been shopping for herself, her husband and their two children.

Before the pandemic, Azzara, a teacher, estimates she spent about $300 a month on groceries, excluding trips to the wholesaler Costco. Now those bills amount to about $450.

"And that’s not really buying anything extra," Azzara said. "That’s just buying what I need."

Azzara said she has been overlooking prices because products, such as meats and sanitizers, have been difficult to find. Earlier in the pandemic, she was shocked by how much a dozen eggs cost, and emailed a King Kullen manager.

“He wrote back to me with an example of all the prices that have increased on his end, too,” Azzara said. “He’s trying not to pass it off on the consumer, but sometimes you have to.”

Stew Leonard's president and CEO Stew Leonard Jr. said the Norwalk, Connecticut-based supermarket has only increased prices in tandem with the market. Leonard said he has been able to offer specials, such as lobster tails for $4.99 per 4 ounces, when vendors have struggled to offload product typically sold to restaurants. He said the market seemed to be stabilizing, including for eggs and meat, and estimated that the cost of a typical shopping basket is now up less than 1% from two months ago. Given a spike in demand for citrus fruits and organic vegetables, Leonard suspected bigger bills are due, in part, to a greater embrace of health-conscious products.

"We've tried to hold the line as much as we can," he said. "I realize there's a lot of people out there that are just trying to feed their families right now."

Leonard said the company's expenses have grown: staff received $2 an hour raises, cleaning spending tripled and roughly $50,000 worth of plexiglass was installed. But he said this had no bearing on food prices.

"Even though our margins have gone down, our volume has gone up," Leonard said. "There's been quite an increase in our sales since the pandemic hit, so that really covers any of your excess costs right now."

The grocery industry continues to earn margins of about 1% to 2% and is not benefiting from higher prices, according to FMI, which represents suppliers, wholesalers and retailers.

“Grocery shoppers can rest assured that a cost increase is not related to increased profits, and instead due to a spike in costs," the group said in a statement.

The pandemic has disrupted and increased expenses at nearly every stage in the supply chain, according to retail analysts. All involved must prioritize cleaning and sanitizing, respect social distancing even if it decreases efficiency and prepare to halt operations or hire more staff when workers fall ill. It's these expenses and supply chain complications that are driving up prices, the analysts said.

U.S. Agriculture Secretary Sonny Perdue said on Twitter that the department will examine beef prices. This announcement came as lawmakers highlighted that packing plants, some of which have had to close, are charging more, while purchasing cattle for less. The average price for all uncooked ground beef in the Northeast rose 6.5% from April 2019 to April 2020, according to the consumer price index. In the metro area food index, prices in all six major grocery groups, from cereals and bakery products to produce, grew by more than 3% during that period.

Before COVID-19, about 46% of food spending occurred at supermarkets, according to FMI.   Now, with many restaurants shut, consumers are relying more on grocery stores. Food suppliers and manufacturers have been trying to ramp up production and keep shelves stocked, analysts said.

Vendors have been curtailing deals that would increase unmet demand, which also influences pricing, according to Krishnakumar Davey, president of strategic analytics at IRI, a data analytics and market research company. He said that, in typical times, consumers can find 90% to 95% of the products they are seeking, but that has fallen to about 80% to 85%.

Jeffrey Klein, a Centereach resident, said supplies have been "spotty" at local supermarkets.

"There's a shortage of stuff," said Klein, 77. "Stuff which would have been staples is a lot more."

When Klein sees deals, such as barbecue sauce for $0.99, he said the items quickly disappear.

“[The sauce] went on sale yesterday,” Klein said. “Today they had none — and we were there at 8 o’clock in the morning.”

Thin ad circulars have been a disappointment to bargain hunters like Scott Boudin, 44, of Old Bethpage. After appearing on "Extreme Couponing," a TLC show highlighting how sales-centric consumers shop, Boudin said he periodically hears from people looking for advice. He has fielded more inquiries over the past few months.

Typically, Boudin said, shoppers who pair coupons and sales   can save about half, but that is now down to about 20%.

"The sales just aren't there. And the coupons to match — they've evaporated," said Boudin, a producer on the "Elvis Duran and the Morning Show" radio program.

Food brands struggling to meet demand do not want to offer deals that result in more disappointed customers, according to Jon Hauptman, senior director of retail pricing and analytics solutions at Inmar Intelligence, a retail analytics firm.

ConAgra Brands, which sells products under the Duncan Hines and Healthy Choice lines, and The J.M. Smucker Co., which is known for its spreads but also sells brands like Café Bustelo, indicated by early April that they intended to reduce promotions, according to research from J.P. Morgan analysts. The report noted the industry-at-large sold a smaller percentage of products on discount over the past month, when compared to last year.

But food manufacturers will be eager to compete for customers by lowering prices when that becomes viable, according to Hauptman.

For now, though, it can be difficult.

"Like every other family on Long Island, we're just doing the best we can to get by right now," he said, adding that he has been picking up shifts shopping and delivering groceries through the Instacart app because his wife, a personal organizer, has not been able to work. "It's just paycheck to paycheck right now, at best."

Average prices in the Northeast