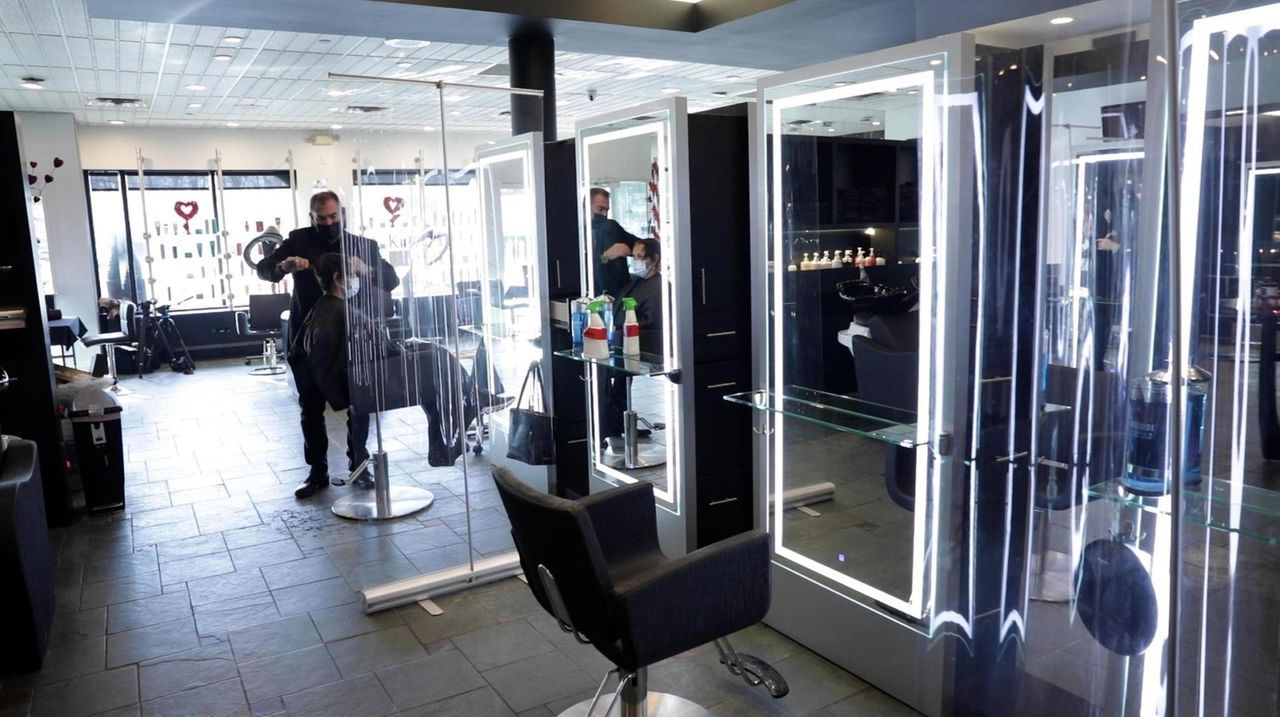 Some LI businesses, such as hair salons and dry cleaners, have been suffering because a large share of their customer base has been working from home since the coronavirus pandemic began. Credit: Newsday / Chris Ware, Reece T. Williams

She used to regularly get her hair styled and nails manicured at salons, and have her work attire cleaned and crisply pressed by a dry cleaner, said the Commack resident, 61. Her workplace appearance was important to her, as a senior specialist investigating employees’ discrimination and harassment complaints for power company Con Edison in Manhattan.

That changed in March, when the COVID-19 pandemic forced Cherry and millions of other professionals to begin working from home.

These days, her hair salon visits are rare, dry cleaning has been nixed and nails are do-it-yourself, said Cherry, who now wears sweatpants to virtual meetings for her job and her board meetings for the National Coalition of 100 Black Women's Long Island chapter.

Her focus has shifted, she said.

"I’m not as concerned about getting that new purse that I like or seeing a blouse in a store window and getting that blouse. I’m happy with the clothes that I have," she said.

The pandemic, which has taken its toll on the U.S. employment rate, health care industry, education systems and nearly every other aspect of life, also has changed how working Americans see themselves – and how others see them.

Less polish of every kind

Employees working from home — and meeting via Zoom — instead of in offices has translated into record declines in spending at hair and nail salons, barbershops, hair waxing and eyebrow threading shops, dry cleaners, shoe repair shops, tailors, and clothing stores that specialize in office attire.

Those small businesses are taking big financial hits — and some aren’t able to weather the storm.

"We’ve been doing everything possible just to keep the doors open," said Daniel Kuchlik, owner of American Dry Cleaners, which has two stores, in Hicksville and East Northport.

Founded by Kuchlik’s grandfather in 1964, the dry cleaning business’ sales are down 50% because of the pandemic, Kuchlik said.

Last year was tough for another reason.

Kuchlik’s father, Peter, who had been running the business since the late 1990s, died of COVID-19 in April.

"I was lucky enough to work with my dad all these years," said Kuchlik, 34.

With fewer customers coming in for dry cleaning services, American Dry Cleaners has tried to diversify its services by promoting its laundry service, and pickup and drop-off options, he said.

He has been able to retain most of his 24 employees, he said.

"I tell my guys this has been World War III for me," he said.

How much will come back?

There are about 21,000 dry cleaning businesses in the United States, and about 75% of their business comes from cleaning workplace attire, said Dawn Avery, spokeswoman for the National Dry Cleaners Association, a trade group based in Manhattan.

The association is getting reports that business at dry cleaners is down about 45% due to the pandemic.

There is a concern that the dry cleaning business will never return to its pre-pandemic levels, Avery said.

"Now that all these companies know that people are fine working from home and can be productive at home, will they go back to the office? That’s a fear we have," she said.

The association is encouraging dry cleaners to diversify their businesses by offering wash and fold laundry service, touchless pickup and drop-off delivery, and disinfection of comforters, Avery said.

Another new stream of revenue is cleaning and disinfecting medical scrubs, since healthcare facilities don't allow doctors and nurses to take their scrubs home anymore in the pandemic, she said.

Though some dry cleaners have closed in the face of the drop-off in business, and others have been gobbled up by large chains, the industry will survive, Avery said.

"Because there’s always going to be a need for dry cleaning," she said. "It’s just [a question of] how many dry cleaners are going to be left?"

Architect Graciela Carrillo and her colleagues returned to work at their Hauppauge office a few weeks ago after working remotely for most of 2020, she said. But meetings with clients take place via Zoom instead of in person now due to the pandemic, said Carrillo, a Selden resident.

Since her work attire is more casual, her need for dry cleaning has decreased considerably, she said.

"I don’t have to be that formal. … When you go to see clients, you definitely focus on your appearance and your hair and your nails," said Carrillo, 46, who is president of the Long Island chapter of the American Institute of Architects.

She also has not resumed getting manicures occasionally, buying makeup often, or getting her hair done at salons every two months, she said.

"I realized we ... as consumers, we spend so much on our appearance. And then, when you are working from home, you are only exposed to a camera when you have some meetings, so you realize you don’t need that much," Carrillo said.

In February 2020, 6.2% of employed New York state residents worked entirely from home and 19.5% worked from home on some days, according to Federal Reserve Bank of Dallas estimates.

Salons statewide were closed from March to June due to Gov. Andrew M. Cuomo’s mandates to help stop the spread of the virus. Once they were allowed to reopen, salons were required to operate at 50% capacity, so every other stylist’s station in DeFranco’s salons is closed.

But the bigger issue hurting revenue is the decline in customers, DeFranco said.

"Because people are working from home, there is no rush to get in. So, we’re surviving on maintenance [hair services]. There’s no weddings, bar mitzvahs, fundraisers," he said.

Consumers aren’t just avoiding salons because they don’t feel the need to invest as much in their Zoom appearances, said Holly Garofano, executive director of the Salon & Spa Professionals of New York State, a Saratoga Springs-based trade group with 400 members and industry partners.

Some consumers also are avoiding salons because of their health concerns over the virus, said Garofano, who also owns a salon upstate.

Furthermore, many consumers are nervous about their employment, so they aren’t willing to splurge on hair and nail care as much as they used to, she said.

She estimates that salon sales are down 30% due to the pandemic.

Furthermore, salons in urban and downtown areas are struggling more because many of their clients worked in nearby offices, which have been shutdown because of the pandemic, said Mary Rector, founder and CEO of BehindtheChair.com, a Chicago-based provider of information, resources and education in the hairstyling industry.

"It has decimated any salon that is in an urban area," she said.

'It’s not worth it to reopen up'

Spending at nail and hair salons, barbershops, hair threading and waxing shops and other personal grooming businesses during the fourth quarter of 2020 fell 58%, or by $40 billion, compared to the same period in 2019, U.S. Bureau of Economic Analysis data showed, Bohnaker said.

But in the fourth quarter of 2020, three states — California, New York and New Mexico — closed salons and other personal grooming businesses for at least two weeks statewide or in specific regions, according to BehindtheChair.com.

Laundry and cleaning services had a decline of 14%, or by $1.4 billion, in the fourth quarter 2020 compared to the same period a year earlier, while revenue at shoe repair shops fell 32%, or by $97 million, Bohnaker said.

A combination of factors is at play, including businesses choosing not to reopen after state mandates for months of closings were lifted, Bohnaker said.

"You know in some cases, they’ve found that it’s not worth it to reopen up if they have to pay for labor and electricity and operating costs, when the revenue that they’re generating [has declined] by having very minimal customers or, in some cases, reduced capacity limits," he said.

Also, consumer confidence only has recovered one-third of its pandemic-related decline because of the uncertainty over jobs and income, he said.

Long Island’s unemployment rate was 5.5% in December, far higher than the 3.6% in the December 2019, according to the New York State Department of Labor.

Most of the high-end shop’s business is for workplace suits, shirts and sports jackets for attorneys, doctors, real estate agents and other office professionals, but the store can create entire wardrobes for clients, said Daniel Marrone, head designer and vice president of operations.

"I’m fond of saying what I do for a living is build a better guy," he said.

These days, however, that building is slow.

Thomas Mitchell Clothiers’ business is down by 75%, so work hours have been cut for in-house tailors at the Huntington location and its sister store in Nutley, New Jersey, Marrone said.

Making clothes used to account for 97% of revenue, while tailoring accounted for 3%, Marrone said.

Some of that shift is due to sedentary customers who’ve gained weight during the pandemic, Marrone said.

"So, guys are bringing in stuff and asking us to let it out," he said.

Police: 2 men shot outside Port Jefferson eatery
1:10
Hempstead man arrested in May arrested again on drug charges
Nassau Hub project could start by March
Warren defeats predecessor to win second mayoral term in Southampton Village
2:15
For dad with new heart, the Father's Day gift is just being here
LIPA accelerating efforts to lower taxes on its power plants
Didn’t find what you were looking for?