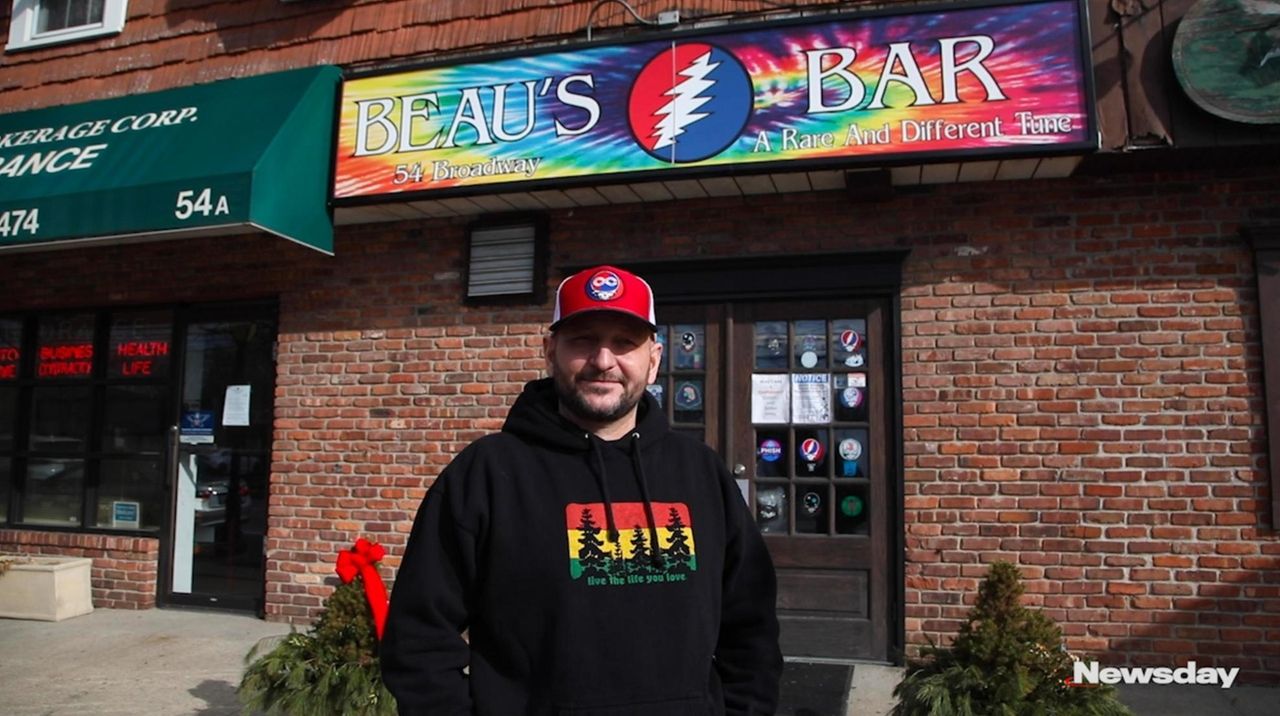 Anthony "Beau" Carino, owner of Beau's Bar, says the pandemic all but killed his business. But a patron and close friend of the bar, Janine Petrowski, decided to start a GoFundMe on the bar's behalf, raising nearly $20,000 to help Carino cover some of his business expenses. Newsday business reporter Daysi Calavia-Robertson has more on this story from Greenlawn. Credit: Barry Sloan

Some Long Island business owners are turning to crowdfunding to stay afloat.

Using sites such as GoFundMe,they rely on the generous donations of friends, relatives, loyal customers and sometimes even complete strangers to pay rent, keep employees on the payroll or simply keep their doors open and lights on.

Anthony "Beau" Carino, owner of Beau's Bar, a 16-year-old rock-n-roll-themed bar in Greenlawn that was forced to close in March during the pandemic shutdown, said he's "forever indebted" to the nearly 200 donors who raised almost $20,000 to help save his bar.

"I was very hesitant about it because I'm really not the type of person who's comfortable asking or taking," Carino said. His GoFundMe campaign, titled "Save the only Dead bar on L.I." — a reference to the Grateful Dead, the '60s rock band whose paraphernalia fills the bar's walls — was started in July by friend and bar regular Janine Petrowski.

"But the truth is, I really don't know what I would've done otherwise," he said. "The money in the GoFundMe made a world of difference for us."

Carino, a husband and father of three, said the donations helped him pay utility bills and get up-to-date on the bar's rent.

He also received a $42,000 Economic Injury Disaster Loan and has since been able to stay current on the rent, manning the bar, usually run by a team of three, with help from only one employee. But a cancer diagnosis late last year combined with climbing COVID numbers led him to shut the bar down just a week shy of the new year. He said he's unsure when he'll reopen but is attentively "watching to see how everything pans out with the virus."

Beau's, Petrowski said, holds "an extra special place" in her heart because it's also the "beloved spot" where she met "the love of my life," her boyfriend Scott.

On the bar's GoFundMe page, other donors — whose donations ranged from $10 to $2,000 — echoed Petrowski's sentiments. Many commenters referred to Carino as being "like family." Others lauded the bar for "having the best local music around," and for leaving patrons "jonesing for another Beau's evening." One donor said the local landscape would be "empty" without the bar.

"People are much more likely to dig into their pockets, even in hard times, if they feel doing so means they're playing an active role, albeit minor, in making sure their favorite bar, coffee shop or book store can stick it out," said Erica Chase-Gregory, director of the Small Business Development Center at Farmingdale State College.

"Businesses that are longtime staples in their communities, that have fostered strong local followings, and regularly engage with patrons are the ones that typically find the most success on sites like GoFundMe, because people see them as truly adding value, and not only to their neighborhoods but to their lives," she said.

"The last thing you want to do is disappoint your supporters," she said.

"Staying open, staying in business ... that's the return on investment donors are seeking, so it's important to have a plan. How will this money help us do that? How will it help us get where we need to be? A GoFundMe campaign shouldn't be the only plan, it should be part of a larger, preferably revenue-driven, plan to help get the business back to sustainability."

Between March and August of last year, New York saw more pandemic-related GoFundMe starts per capita than any other state in the nation, company spokesman Patrick Mahoney said. During that period, approximately 60% of all COVID-19-related fundraisers started nationally were to support small businesses, he said.

"Over the past year, we've seen an unprecedented level of need on GoFundMe," Mahoney said. He said activity on the site has mirrored the evolution of the pandemic itself.

In the earlier months of the crisis, the crowdfunding platform saw an influx of campaigns for PPE for frontline workers. "We later saw an uptick in fundraisers started to support small businesses facing financial hardships, to support laid off workers or cover operational expenses," he said.

For cash-strapped business owners, GoFundMe is a safe choice among crowdfunding sites because unlike"all or nothing" platforms such as Kickstarter, organizers can cash out all the money they raise, whether they reach their goal or not.

The company collects a 2.9% credit-card processing fee and a 30 cents per transaction fee, of which it receives "a very small fraction," Mahoney said, and relies on "voluntary tips" from donors to cover the costs of its services, safety protections and technology.

Some business owners felt the pinch of the pandemic more quickly than others and turned to GoFundMe as early as March. Jarett Slionski, co-owner of Iron and Tread Barbershop in Sayville, set up an "Iron and Tread Relief Fund" on the site by the end of the month.

He and the 10 barbers who work in his shop were left high and dry when the business was ordered to close March 20. "It kills me to have to do this but at this point, I don't know what else to do," Slionski wrote on his business' GoFundMe page, calling the initiative his "last hope and last option."

He added: "As most people know, barbers [and others in the hair care industry] work paycheck to paycheck, most of us for cash. If we're not cutting hair, we don't make money. We don't get paid time off, we don't get sick days and we don't get holiday pay. We don't get health benefits or unemployment, and it's a struggle."

More than 200 Iron and Tread supporters donated to the shop's GoFundMe, raising about $9,500 — money, Slionski said, was largely used to pay bills and help his employees get by.

One donor, contributing $100 wrote, "if you guys can make my mug look this good, this is the least I can do."

Nearly a year after the shutdown, Slionski said business has been "okay."

"Of course, it's not the same as before, and we have these lulls when COVID spikes happen, but we still have all our guys on staff," Slionski said.

"People definitely showed us love. They took care of us. They helped us a lot. Some of our regulars were going on the page weekly to make donations. Most of us have kids, families to provide for ... what they did, it's beyond special. We're still here because of them."

But Slionski, whose business reopened in June, said it wasn't just regulars who contributed.

"Some were strangers," he said. "People who've never even stepped foot in the shop but wanted to do their part to help a struggling small business survive."

Titled "Help Save Wit & Whim," the online fundraiser included a two-minute video highlighting the shop as a place where "over 60 local artists sell their goods," and a place "for the community, to gather and explore."

"The pandemic hit and changed everything ... without assistance, we will have to close our doors permanently. Help us keep Wit & Whim open by donating," read the last slide on the video.

"At the time, we were basically thinking of it as a presale," Conte said. "But the most astonishing and heartwarming part is that most people were so gracious, they didn’t even want to accept their free gift or gift cards."

"We were closed for three months, two of which are typically our busiest months, April and May," Harper said. "Without Mother’s Day sales, graduations, teacher’s gifts, we lost a big chunk of what keeps us going throughout the year, so we know there’s no way we would’ve been able to reopen on our own."

The money was the shop’s saving grace, she said. "It helped us pay bills, pay rent, buy merchandise ... without help from the community, we would’ve had to close our doors for good. To say we’re grateful is an understatement."

Not every GoFundMe fundraising story has a happy ending. Despite crowdfunding efforts, for some businesses the money raised through a GoFundMe is just not enough to keep the wheels turning.

So the tale went for Dawn Villacci Dorsa and her mother, Jennifer Villacci, co-owners of Reach for the Stars preschool and day care in Ridge, who despite having raised more than $6,000 on a GoFundMe titled "Save Reach for the Stars Preschool," in June were forced to close the child care center they had operated together for nearly 20 years.

The experience, Villacci Dorsa said, was heartbreaking. "We tried everything," she said to Newsday at the time. "But it was all to no avail, there was no catching up from this. ... Bills just piled on." Villacci Dorsa said rent on the facility was about $15,000 a month.

"It was all too much," she said. "But at least we know, in our hearts, that we really tried."

Daniel Antoniou, owner of three indoor family fun centers on the Island, said his situation has been trying in a different way. His businesses haven't been allowed to open since the shutdown last March.

"The financial toll of having my businesses shuttered for so long is insurmountable. I owe about $460,000 in back rent alone," said Antoniou, whose childhood friend Robert Bender just weeks ago started a GoFundMe on his family's behalf.

He's received a $380,000 EIDL loan, has reached out for possible aid and has put his house up for sale. At his businesses, Antoniou has had Plexiglass dividers installed, put up social distancing signs, and set up antimicrobial fogging machines to disinfect all play areas, all in anticipation of the day businesses like his are allowed to reopen. He said he and his family are doing their best to hang on until then.

But a timeline of when that maybe remains elusive. Jack Sterne, Gov. Andrew M. Cuomo's administration spokesman, said, "With cases [of] new variants emerging, we continue to monitor how and when higher-risk industries like these can safely reopen. We appreciate that these business owners want to plan in advance to operate safely, and will work with these industries as that process continues."

"After being shuttered for the past nine months, the business and family are now facing financial hardship," Bender wrote in a lengthy GoFundMe post. "Please consider supporting the Antonious during this time."

"Craig took an interest in the story and shared it on air with his listeners," Bender said. "He also tweeted about the GoFundMe [campaign] which was amazing because donations started flowing in almost immediately after."

In just a few hours, donations rose from $2,000 to $20,000. "It was pretty wild," Bender said. "Daniel's such a humble guy that he actually started feeling bad about all the donations coming in."

"It blew me away because I know we're not the only ones going through a hard time right now," Antoniou said. "The amount of support we've gotten has been incredible. There's really nothing stronger than people helping people. It's such a powerful thing."