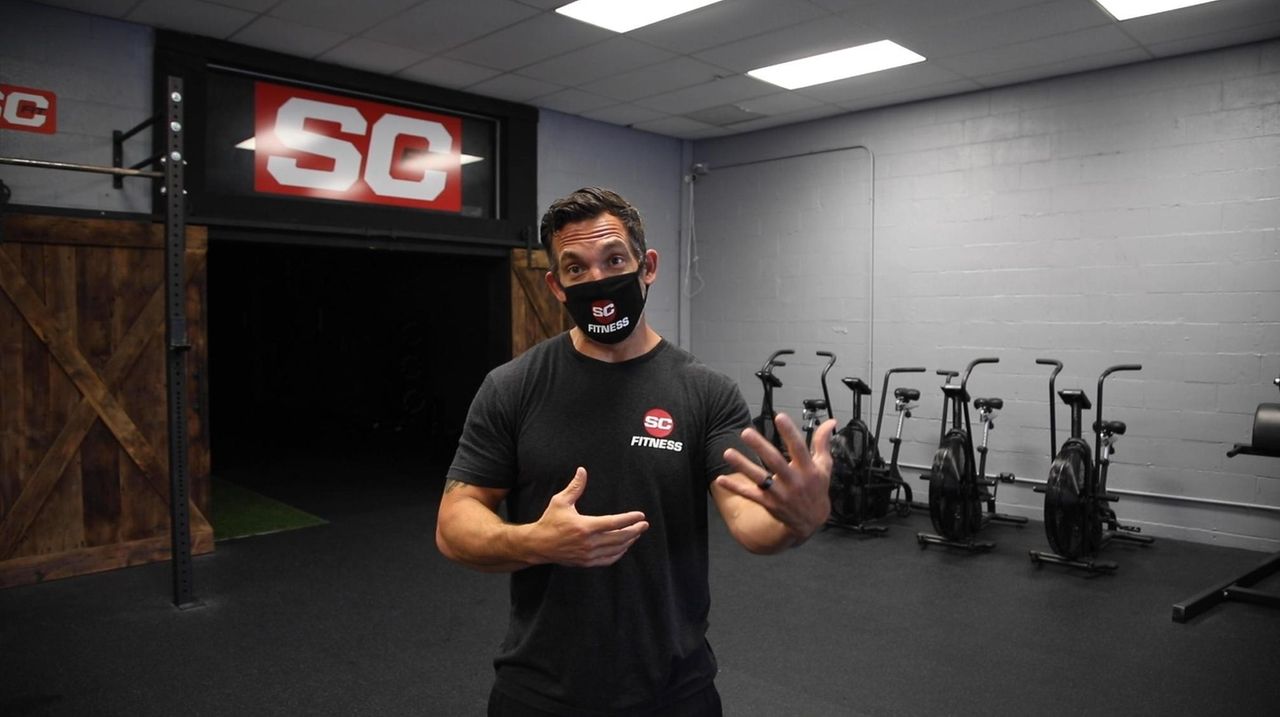 Charles Cassara, owner of SC Fitness, which has locations in Hicksville and Farmingdale, talks to Newsday about boutique and local gyms appealing to be included in New York's Phase 4 of reopening.    Credit: Barry Sloan

Local gyms and fitness studios are fighting back against Gov. Andrew M. Cuomo’s decision to postpone their Phase 4 reopening, with one Long Island gym owner leading the charge with a class-action lawsuit that’s expected to represent thousands of plaintiffs, his lawyer said.

Charles Cassara, owner of SC Fitness, with locations in Hicksville and Farmingdale, said Cuomo’s decision negatively impacts small gyms that already have made preparations to reopen with Phase 4, which is scheduled on Long Island for July 8. Additionally, with no reopening date in sight, owners are struggling with financial insecurity, lease decisions and lack of clarity with regard to their gyms’ futures.

Cassara and his lawyer, James G. Mermigis of Mermigis Law Group in Syosset, plan to file the suit against the governor, state and attorney general next week, and expect to have between 1,500 and 3,000 plaintiffs, Mermigis said. Cassara said he originally had 10 other gym owners on board but was persuaded to put the message out on Facebook, where thousands of other owners have joined the cause over the last week.

Cuomo spokesman Jason Conwall said, "We can't comment on a lawsuit that hasn't been filed yet, but there are some things that don’t fit neatly into a phase that are going to require further study and we’re going through that right now. We’re not going to be like other states that are inviting a second wave.”

Jeff Lovering, owner of Goshinkan Dojo in Merrick, said he is considering participating in the lawsuit. Lovering, who’s owned his dojo since 1983, said he spent a considerable amount of time and money preparing for reopening, including setting up his gym so his students can train 6 feet apart, getting temperature gauges and buying a disinfecting sprayer. He also closed down the locker rooms.

“I’ve shut down all the stuff I’m supposed to … to comply” with cleanliness regulations, Lovering said. “But yet we’re being prohibited from allowing [this opening] to happen. I think it’s a total injustice … The dictate from the governor is totally arbitrary.”

Dr. Bettina Fries, chief of the division of infectious diseases at Stony Brook Medicine, said there's a reason gyms are being held back from Phase 4: Sweat, common touch points, and the aerosols produced by heavy breathing are very conducive to the spread of disease.

"You have to be really careful when opening a gym," she said, adding that these risks aren't necessarily mitigated in smaller, boutique fitness environments. "People aren't quietly sitting in a corner with their mouths closed. They have their mouths open, they cough, they breathe loudly."

There have been instances in South Korea where gym openings have led to the spread of COVID-19, she said, and it's been evident in the spread among NBA and MLB players and personnel. A Planet Fitness in West Virginia recently had to close when a gym-goer exposed patrons to the virus, according to its Facebook page.

With smaller gyms, "it depends," Fries said. "It's not only about how many people [are working out] but what kind of room they're in. A lot of small classes are also in small classrooms. If you set the same amount of people in a classroom, all two meters apart, and they don't talk, just listen, that risk is much lower than people in a classroom where they sweat, they exhale, they talk, maybe they scream."

Lovering said he believes he can operate his dojo safely.

"The governor means the best he possibly can for the general community, but unfortunately, what happens here is we don't have a specific listing for us," meaning that small studios with limited class sizes are in the same category as mega-gyms that hold hundreds of people at a time.

Melanie Ronaldo, owner of My Pilates Studio in Plainview, said she’s joined the Facebook group for the class-action lawsuit and worries how a delayed opening could adversely affect her clients.

“I have clients with major issues that depend on this — clients with MS, spinal fusion, a lot of things that this is really helpful for,” she said. “What bothers me the most is that I can’t come in and help them.”

She, too, believes that her business is not really a gym in the traditional sense, and should be classified differently.

“Boutique fitness studios are not gyms,” she said. “We would be following the guidelines. Most of us are less than 10 people a class — mine is. They’re allowing camps to go on and things of that nature and restaurants and we’re [classified] as less than that.”