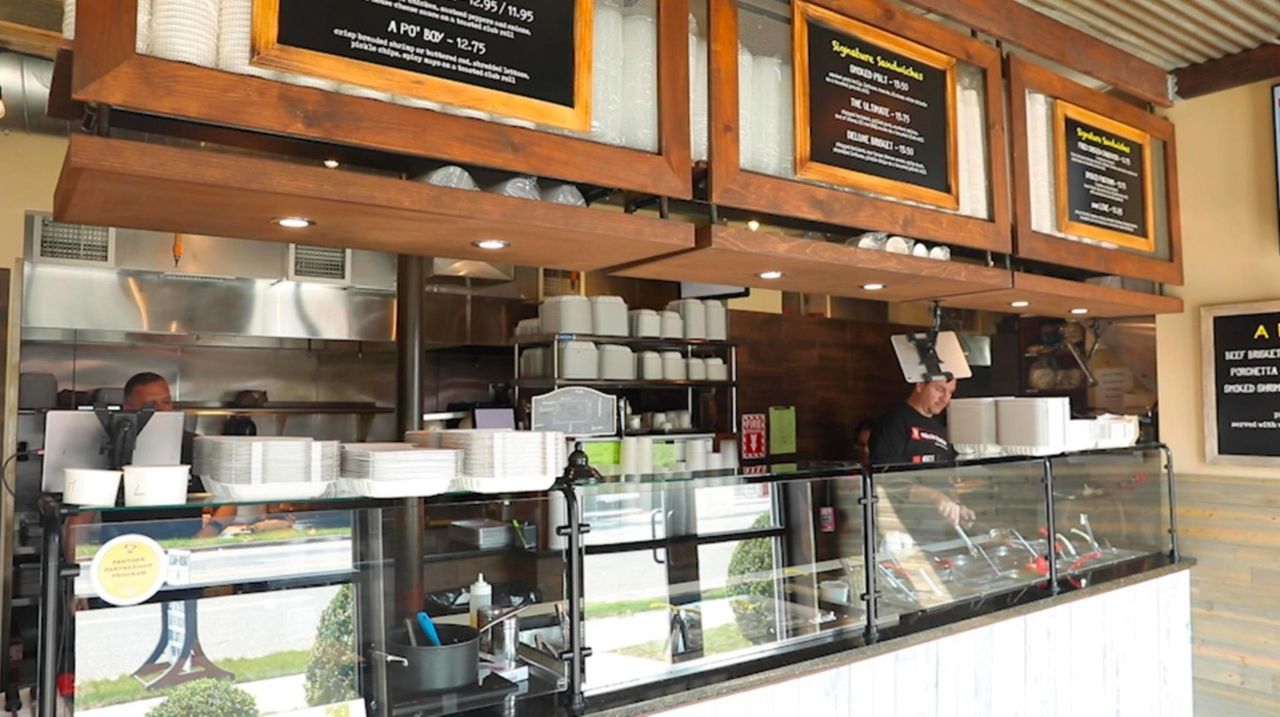 The pandemic has some small businesses spending more money on inventory, supplies and ingredients. Now, business owners are figuring out how to combat the increase in costs.  Credit: Newsday / Reece T. Williams

A restaurant in Garden City adjusted its menu to avert it. A toy shop in Kings Park bought more from a local manufacturer to reduce it. And a wine shop in Wading River plans to consolidate offerings to try to minimize it.

Despite these types of efforts, price increases have become unavoidable for businesses across Long island, owners said. After months of absorbing larger expenses, companies can no longer squeeze by using strategies that soften the blow, said Emmanuel "Manny" Voumvourakis, co-owner of barbecue restaurant Smōk-hau̇s in Garden City.

"This summer was the point where we felt that we needed to raise prices," said Voumvourakis, of Mineola. "Rampant inflation was on everyone's mind. It was talked about quite a bit. So we felt that that was the optimal time to raise prices because customers wouldn't be shocked."

Restaurants, retailers and salons have been paying more for ingredients, merchandise and supplies and must recoup some of this expense to remain viable, owners said. The average restaurant check has increased 4.6% nationwide over the past year, the food industry consulting firm Technomic said. Imported items have become particularly costly, given elevated shipping rates. The price of transporting one container from Shanghai to New York has grown five times more expensive from September 2019 to now, according to the maritime consulting firm Drewry. In the metro area, the cost of goods and services rose 3.7% from August 2020 to August 2021, according to the U.S. Bureau of Labor Statistics.

Escalating expenses are impacting businesses beyond Long Island. The net percentage of small businesses across the U.S. raising their prices hit 49% in September, the highest share recorded since 1980 on surveys conducted by the National Federation of Independent Businesses, which represents 300,000 small firms.

Businesses have been spending more on goods — and the shipping companies that deliver them — because of shortages brought on by COVID outbreaks as well as inventory cutbacks that occurred when consumers were largely confined to their homes, said Robert Goldberg, clinical associate professor of finance and economics at Adelphi University. At the same time, demand has surged in certain sectors, fueled by more generous public benefit and stimulus policies, he said.

"These extra dollars are pumping up the prices of stocks, bonds, houses and consumer goods, starting with those goods directly impacted by the pandemic-induced supply-and-demand challenge, but ultimately working their way through most goods and services," Goldberg said.

Voumvourakis knew something was off when the price of wings didn’t fall after the Super Bowl. Smōk-hau̇s spent $110 in February on a 40-pound case of jumbo party wings, which hit $120 in March. By June, the restaurant was paying $160, Voumvourakis said. The price has since been hovering above $150.

But the new chicken options did not relieve the strain of offering six wings for $10. In July, Smōk-hau̇s brought the dish up to $12. Now the food cost of that item is about 38% of the revenue, which is more sustainable than the previous 48% ratio, Voumvourakis said.

Smōk-hau̇s went through similar adjustment with other meats. Since the beginning of 2021, the price of chicken thighs jumped 213% and the cost of brisket grew 116%, according to data from the restaurant.

The eatery raised prices 5% to 10% in July and began operating seven days a week instead of six. While staffing up in late May, Smōk-hau̇s boosted pay to help retain and attract employees when many in the industry were struggling to hire. The growth in payroll was not substantial enough to put pressure on menu prices, Voumvourakis said.

"We raised prices to counteract or counterbalance the increase in protein prices," he said, describing the changes as "just enough to feel like we’re protecting the business."

A group dining outside Tuesday afternoon said they'd noticed higher prices at Smōk-hau̇s — and across Long Island. They said the changes didn't surprise them and must be stressful for businesses already juggling supply chain shocks, higher wages and worker shortages.

"They have to do it," said Mark Siver, a Douglaston resident who works in wealth management. "We feel bad for them."

Removing wings from the menu altogether was one in a series of adjustments at Chara's Kitchen and Catering, said Cheryl Grigg, owner and chef at the Bellport soul food restaurant. Grigg worked around ingredients that grew so expensive she would need to charge more than most customers would pay. Then in July, she raised restaurant prices 10% to 20% and catering rates about 25%.

But finding ingredients from purveyors she trusted remained a challenge.

"I had to go to Sam's Club to get ribs," Grigg said, noting that she couldn't get the meat from distributors that cater to restaurants.

While working through these challenges, Grigg got sick and realized she needed to cut back. She pivoted to catering-only a few weeks ago. Grigg still hopes to reopen her restaurant, which before 2020 operated seasonally, from April to October.

"When it comes to catering, if they want it, they'll pay for it. So that's easy," said Grigg, of Shirley. "It’s the people that come every day to the restaurant. They’re like: Oh my God, it shot up $2; I was just here last week."

Diners are paying larger bills, but restaurants aren't necessarily benefiting, according to Technomic, a firm that researches the food service industry. Check averages nationwide increased 4.3% at full-service restaurants and 6.6% at limited-service restaurants from last August to this August, Technomic said. But once inflation is accounted for, industry sales nationwide were down 5% from the beginning of the year through July, compared to that time in 2019.

Salons, spas and other personal care companies have been shelling out more for supplies, operators say. Marisol Joseph has researched new distributors, but none have had deals that reduce the soaring expenses at her Huntington salon, Marisol's Beauty Touch.

A box of 50 gloves that went for $8 before the pandemic might cost as much as $31, she said. A dozen rolls of massage table paper went from $56 to $95. She also has to lay out more for wax, application sticks and other materials.

When she returned to work last June after the pandemic shutdown, Joseph increased prices by $5 to $10 without much pushback from customers.

"I would say about 90% of them were understanding," said Joseph, of Melville. "These increases are happening all around the board. People have to understand that this is just supply and demand."

More than one-fifth of consumers have experienced higher prices in the personal care industry, which includes salons and gyms, according to a poll released last month by Bankrate.com, which publishes financial research and advice.

Joseph got word this summer that maintenance costs for her laser hair removal gear will increase, but she's hoping to find an alternative company to service the equipment. She wants to keep her prices steady until at least 2022.

With freight costs surging, LI Toy & Game in Kings Park may have to offer fewer items for more money, said Bill Stewart, who runs the business with his wife. The shop purchases toys and games from distributors, who have raised their rates because shortages in the shipping industry have pushed up their costs, Stewart said.

"One of my distributors told me they have several containers that are stranded in China," said Stewart, of Huntington. "They keep getting outbid."

The cost of shipping a 40-foot container from Shanghai to New York was about $15,125 earlier this month, compared to $2,685 in September 2019, according to a World Container Index compiled by the maritime consulting firm Drewry.

LI Toy & Game must charge customers about 30% more for the model kits made abroad, a significant share of the model segment, Stewart said. He has increased his orders with Atlantis Toy and Hobby Inc., a local manufacturer in Deer Park, whose model kits have gone up less — $1 to $2 per item, Stewart said.

"A lot of people aren’t familiar with this company yet," he said. "I push it a lot, and I’m hoping it catches on."

Stewart is nervous about running low on inventory for holiday shopping, when he says many Long Islanders like to see what items catch their eye. He anticipates most will spend the same dollar amount, but buy fewer items.

"The real concern is: Am I going to have empty shelves?" Stewart said. "After the second week of January, I really have almost zero sales until March. So I need that cushion" of a good holiday sales season.

Wines by Nature in Wading River has so far limited price increases to three or four bottles, but nearly all items will need new price tags by Thanksgiving, owner George Eldi said. The shop has been sizing up which wines will sell after distributors raise their rates.

About a month ago, Eldi said he started paying more for a French Chardonnay and upped its price from $14.99 a bottle to $16.99 a bottle, an amount that he felt was reasonable given the wine's quality. But he pulled a Chilean Cabernet because he believed asking customers for $16.99 a bottle, as opposed to $13.99 a bottle, was not viable.

"We’re going to easily replace that price point and that quality and that flavor with something else," said Eldi, whose shop focuses on wines from smaller wineries and vineyards.

He strives to keep his shelves eclectic, but may need to consolidate the store's offerings now that merchandise costs are climbing.

A pair of retirees walking past Wines by Nature and the rest of The Shoppes at East Wind said living on fixed incomes meant they'd had to cut back on eating out and other expenses.

"In the fall, I would go out and buy chrysanthemums and pumpkins and decorate the front of the house. I’m just not doing it," said Mary Wilder, of Yaphank. "It makes me feel sad."