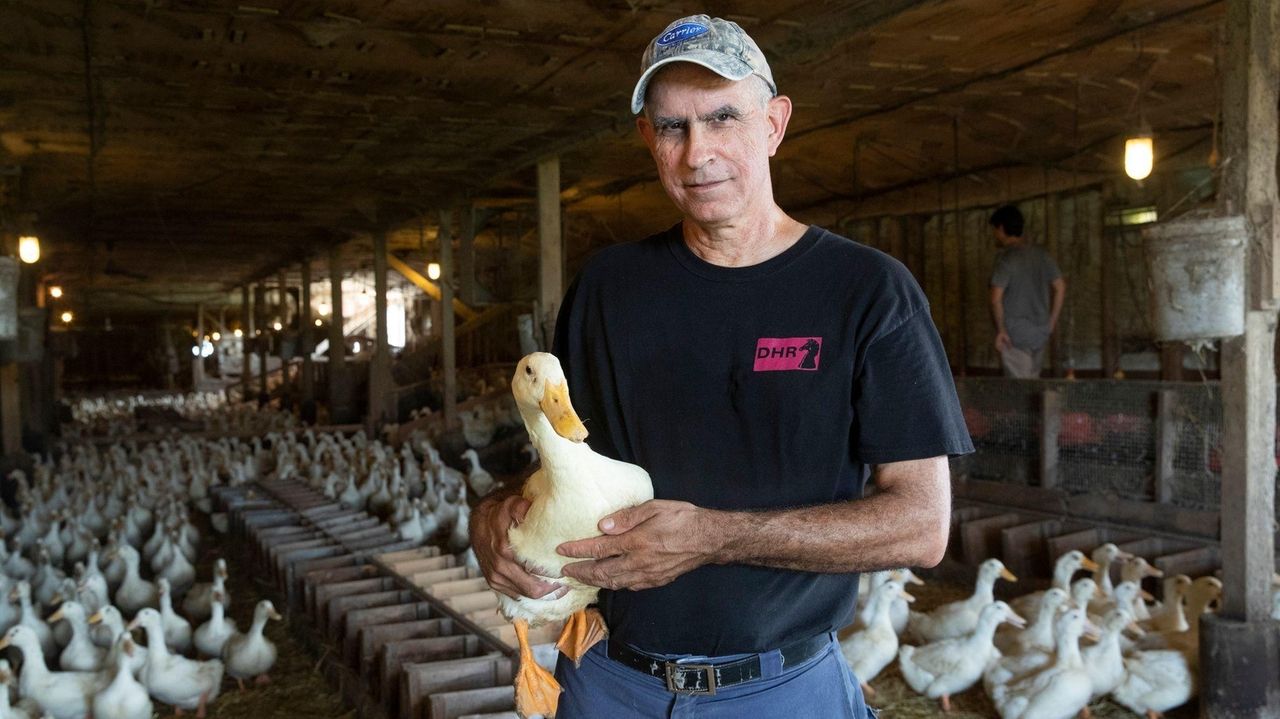 Douglas Corwin, president of Crescent Duck Farm, talks Thursday about having to lay off most of his staff after COVID-19 caused a major decrease in sales. Credit: Newsday staff; Photo credit: Randee Daddona

Layoffs have skyrocketed on Long Island, as scores of larger Long Island companies have temporarily cut more than 7,600 employees at car dealerships, restaurants, medical offices and other businesses because of the COVID-19 pandemic.

A Newsday analysis of staff reduction notices filed with the state demonstrate the virus’s far-reaching impacts. Companies employing 50 or more people — about 4% of the private sector businesses on Long Island — are required to file layoff notices, known as Worker Adjustment and Retraining Notification, or WARN. The notices are posted online daily.

More than 175,000 Long Islanders have filed for unemployment in the past four weeks.

The roster of Long Island businesses that have cut employees because of the pandemic include the Garden City Hotel, with 290 layoffs; the Crest Hollow Country Club in Woodbury, with 311; Harbor Day Care Center in New Hyde Park, with 272; VSP Global, a vision health-care insurance company in Melville with 176; and Jewel Restaurant in Melville, with 121.

All business owners or managers, with the exception of Crest Hollow Country Club owner Richard Monti, either declined to comment or did not return calls.

“Laying off all these people, without a doubt, was the most difficult thing I’ve ever done,” said Monti, owner of the Woodbury club.

Monti said he had about six weeks of food that he is distributing to his laid off employees,

“These people need to eat. They need to feed their families,” he said.

About 3,600 of the Island’s 108,000 companies have 50 or more employees. All told, they account for about half the private-sector jobs on Long Island, said Gregory DeFreitas, senior labor economics professor at Hofstra University.

“I think the WARN numbers are undoubtedly underestimates of what’s going on,” said DeFreitas, who is also director of the Center for Labor and Democracy at Hofstra.

Crescent Duck Farm, a duck processing plant in Aquebogue, got hit by the COVID-19’s cascading damage.

“I never envisioned I’d fill out a WARN notice,” said president Douglas Corwin, who temporarily laid off 46 of his 55 employees — something his company has not done in his lifetime.

The combination of the closure of restaurants — his primary customers — and the fact that one of his employees got sick with the virus prompted the layoffs beginning March 30. That employee was hospitalized but has since been discharged.

Corwin said he’s optimistic but doesn’t think the marketplace will be the same once businesses reopen. “Imagine when the first person sneezes in a restaurant. How is everyone else going to feel?”

As of Tuesday, the New York State Department of Labor had posted 128 WARN notifications for the Long Island region. That is nearly three times the number filed for all of 2019.

Of those, 104 companies specifically listed COVID-19 as the reason for the filing. The notices specifying COVID-19 describe 7,680 employees being affected with a layoff date of no later than April 24.

Although layoff notices have increased dramatically, John A. Rizzo, chief economist for the Long Island Association business group, said the picture could be worse. He remains optimistic that federal aid will arrive, despite a recently announced cap on Payroll Protection Program aid for businesses.

“When I look at the absolute numbers, this looks like firms do not want to lay off workers because they anticipate that they will get the bailout,” Rizzo said. “Imagine if they thought there was no bailout at all, that there was no help.”

That’s little consolation to people like Donna Cunningham, controller at North Shore Honda in Glen Head, which temporarily laid off 36 of 57 employees for the first time ever. Only the service department of the dealership remains open for business.

Once the shutdown is lifted, North Shore Honda will be able to resume business quickly, but, “You’re never going to make up the income you lost,” she said.

Some businesses have tried to pivot to new markets.

The company also provides laundry services for the gowns and, as a result, has been able to bring back some employees.

“Three weeks ago, it felt like the business was going to close completely,” he said.

Other businesses have found ways to stay in touch with laid-off employees as they weather the pandemic.

McVeigh Global Meeting and Events, an event planning company in Amityville, has temporarily laid off 53 employees. But Debbie Mustacaros, human resources and office manager, said everyone in the company has been affected because those who haven’t been furloughed have had their hours reduced.

“We’ve had to make a lot of very hard decisions,” she said.

Duck farmer Corwin said he expected to reopen fully, but probably “not at full speed” because of the likely continuing restrictions on restaurants. Nonetheless, he said he was optimistic.

“We’re going to come back as a society,” he said.