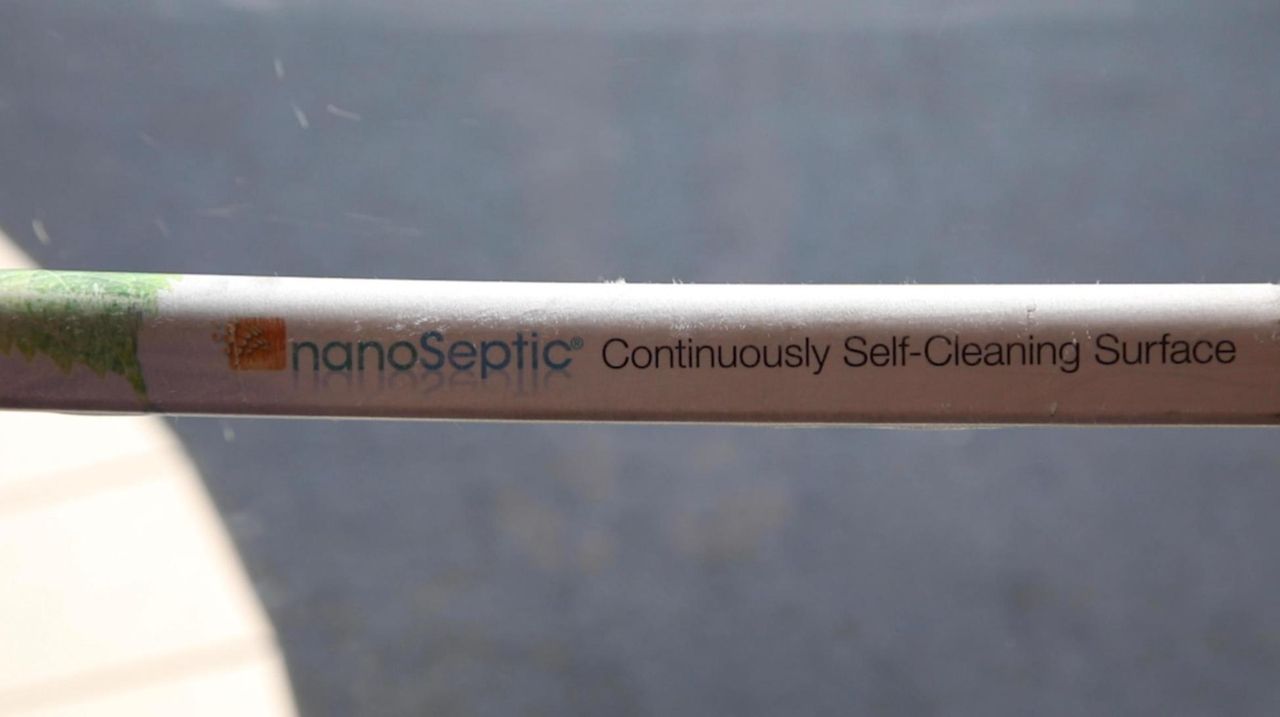 Broadway Commons in Hicksville has applied NanoSeptic adhesives to door handles, elevator buttons and other areas in the mall that come in frequent contact with the public. The adhesives are being used to help keep surfaces clean amid the COVID-19 pandemic but the U.S. Environmental Protection Agency does not allow the manufacturer to claim that its product kills the virus. Credit: Barry Sloan

Broadway Commons in Hicksville has placed adhesive decals, described as NanoSeptic "self-cleaning surfaces," on door handles, elevator buttons and other high-touch areas as part of its efforts to make shoppers feel comfortable and safe.

The maker, NanoTouch Materials LLC in Forest, Va., says on its website that NanoSeptic decals have “a mineral nano-crystal which acts as a catalyst, charged by visible light. These nano-crystals create a continuous, powerful oxidation reaction. This oxidation reaction breaks down organic material into base components such as CO2.”

NanoTouch's website doesn't claim that NanoSeptic "skins and mats'' kill COVID-19, but it says they are "continuously self-cleaning surfaces.”

NanoTouch declined to give specific sales numbers but says demand has surged amid the pandemic.

"Given that everyone is concerned about hygiene, it makes sense that public-facing organizations like professional sports venues, including NASCAR and the PGA, are deploying NanoSeptic surfaces," Mark Sisson, partner at NanoTouch, said in an email Monday.

The company was shipping a few orders a day last year and now ships about 150 orders daily, he said.

"Many of these orders are fairly large since organizations are purchasing for all of their facilities. For example, a bank’s recent order will cover 750 different branches," he said.

As part of its routine monitoring program, BBB National Programs’ National Advertising Division reviewed advertising claims about NanoSeptic, and said in a report issued July 29 that the six independent lab reports NanoTouch submitted showed that bacteria and viruses are reduced on NanoSeptic surfaces without the use of other antimicrobial cleaning agents.

(Based in Arlington, Va., BBB National Programs is an independent nonprofit whose programs were part of the Council of Better Business Bureaus until June 2019.)

NanoTouch does not object to NAD's recommendation, Sisson said.

"NAD correctly concluded that we mistakenly used the word 'clean' instead of 'cleaner,' and we completely agree with NAD's suggestion to change the wording to 'cleaner,'" he said.

NanoTouch was founded in 2012 and works with distributors in 30 countries, according to its website.  Its research and development lab was funded by a $2 million grant from the Virginia Tobacco Indemnification and Community Revitalization Commission in 2015.The NanoSeptic product line includes handle wraps that can be used at security checkpoints ($45 to $60), a 25-pack of elevator button covers ($49.95) and a 25-pack of door push-bar covers ($137.50), according to an online brochure. The company recommends replacing the adhesive skins every 90 days.

Most malls on Long Island have automatically opening doors, eliminating the need to touch handles, but Broadway Commons does not.

“NanoSeptic skins are another layer of protection in addition to our already enhanced cleaning protocols based on the CDC guidelines,” Falbo said.

The American Industrial Hygiene Association, a trade group in Falls Church, Va., has seen a significant increase in companies inquiring about how to keep their buildings clean during the pandemic, said board certified industrial hygienist Bernard L. Fontaine, Jr., a member of the association’s Back to Work Safely Task Force.

There is no public scientific evidence to evaluate the claims about NanoSeptic’s effectiveness, so industrial hygiene experts will not be able to give an opinion on the product, he said.

“We have not seen any peer-reviewed scientific studies in the literature and there are no studies provided by the manufacturer to review and consider,” he said.

This story was updated with comments that Mark Sisson, partner at NanoTouch Materials, provided by email Monday.