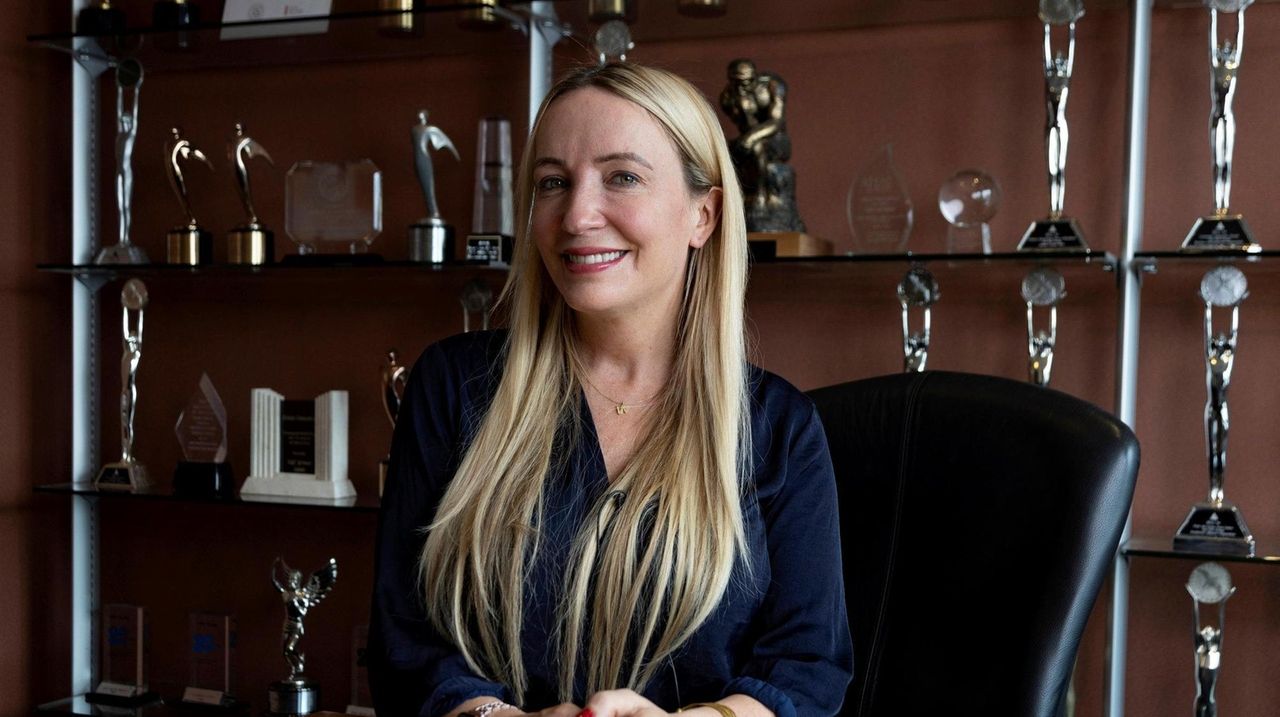 The pandemic has changed how and what we shop for. Nicole Penn, president of EGC Group, explains what trends she expects will continue.  Credit: Howard Schnapp

Consumers, reshaped by the pandemic, are going on a buying spree, academics, researchers and business leaders say.

Their so-called "revenge spending" — to reclaim pieces of their life stolen from them during the lockdown — will buoy businesses this year as the pandemic ebbs, and shoppers' newly adopted buying habits will continue to change the marketplace in the longer term, the experts say.

Though the economic reopening is in its early innings, businesses on Long Island are already feeling the impact:

•A luxury car dealer reported that credit applications — a key indicator of demand — are up more than 100% year over year;

•A publicly traded flower and gift company rode increased e-commerce to record sales and profit in the March quarter;

•A kosher deli's geriatric customer mix got a youthful infusion as teens and young families connected with pastrami and corned beef via Grubhub, Uber Eats and Goldbelly, a national food shipping service.

"We're seeing a big [third and fourth quarter] boom, basically across the board," she said.

Though the pandemic dealt an economic blow to furloughed workers and owners of businesses that were forced to close, many Americans lived in enforced austerity during the COVID-19 restrictions as they received stimulus checks and continued to draw paychecks.

Now they are ready to open their wallets.

A McKinsey & Company survey from March found that 51% of consumers planned to "splurge" immediately or once COVID-19 abates, with high-income millennials splurging the most.

66% of U.S. adults plan to "treat themselves" to celebrate the end of COVID-19 restrictions

Another report based on a May survey found that 66% of U.S. adults plan to "treat themselves" to celebrate the end of COVID-19 restrictions and 44% were willing to take on debt to pay for it.

The top categories for which consumers would add debt were automotive (15%), home renovations (14%) and travel (12%), according to the study, published by CreditCards.com.

In the longer term, pandemic byproducts like the accelerated adoption of researching and buying goods online are expected to linger and reshape the marketplace.

Bernd Schmitt, a marketing professor at Columbia Business School, said the pandemic made people "aware of their mortality and vulnerability," with some "rethinking their lives." But, he said, that period of self-reflection could soon be interrupted as the rapid vaccine rollout instills a fresh sense of confidence and sends consumers streaming back to stores.

"The party starts soon," Schmitt said. "They can't wait until they get back to the mall."

One shopper who's ready to don a mask and return to in-person buying is Sharon Davis-Edwards, proprietor of the Freeport-based employee benefits firm S.J. Edwards Inc.

During the lockdown, Davis-Edwards said, an online grocery delivery service and the e-commerce retailer Amazon.com kept her supplied, but as in-person business returns, she plans to refresh her wardrobe.

"I'm a shopaholic when it comes to business suits," she said. "I'm definitely ready to buy business suits and shoes. Black pumps."

That rebound will set cash registers a-jingling, according to the National Retail Federation.

That includes aspirational products such as high-end cars.

'The entire car market is on fire right now.'

Matthew Carlson, general manager of Rallye BMW in Westbury, said he is seeing some Chevy buyers who want to move up the luxury scale.

"The entire car market is on fire right now," he said. "My credit applications year-over-year are up 107%."

"We believe this trend is unlikely to reverse itself even as more people get vaccinated," he said.

Of the digital traffic on the company's major brands, mobile devices accounted for more than half.

Bedgear LLC, a Farmingdale maker of bedding and mattresses, also saw a surge in e-commerce and predicted that online sales would remain elevated.

The pandemic decimated the indoor dining and catering business at Lido Kosher Deli in Long Beach, much as it did with other restaurants.

'Pickup and delivery went bananas ... We had to take the phones off the hook.'

"Pickup and delivery went bananas," he said. "We had to take the phones off the hook."

About a year ago, the deli joined Goldbelly, which sends restaurant meals and food gifts nationwide.

"We ship all over the country," Goetz said.

The pandemic lockdown and the digital shift to delivery services Grubhub and UberEats also introduced young customers to the kosher deli, a category that "almost went extinct" as the customer base aged, he said.

"Without a doubt my customers are probably older than any place in town," said Goetz, who welcomed a new generation during the lockdown.

"We had a lot of new customers," he said. "Kids were home from college. The young guys order these big combination sandwiches. They go to town. It was very noticeable. ...That's the future."

Data from the Federal Reserve Bank of St. Louis suggests the digital trend has legs.

McKinsey's March survey echoed those findings of "continued digital stickiness," with a 35% year-over-year increase in online credit and debit card transactions as of January.

A March 2021 survey of bank customers by Melville-based call-center company Verint Systems Inc. found that during the pandemic a majority of banking customers tried digital channels first to open an account, apply for a new service or conduct a transaction.

Since 2020, twice as many customers have been using micropayment apps Venmo and Zelle, the study found.

The online migration also made an imprint on grocery shopping.

43% The increase in online sales for U.S. grocery stores, to $9.3 billion, according to a survey by research firm Brick Meets Click and e-commerce service provider Mercatus.

Despite an easing of pandemic restrictions in March, U.S. grocery stores saw a 43% increase in online sales to $9.3 billion, according to a survey by research firm Brick Meets Click and e-commerce service provider Mercatus.

Oleg Urminsky, a professor at The University of Chicago's Booth School of Business, said that among the more subtle trends during the pandemic was a move by consumers away from foods seen as tasty and toward foods considered healthy.

"They wanted to boost their immune systems," he said.

A report by Port Washington-based market research firm The NPD Group said that as Americans, homebound by the pandemic, gazed at their large-screen TVs, they also increased their consumption of ready-to-eat popcorn, the fastest-growing snack food.

Popcorn was "well-positioned to benefit from increased digital streaming used to pass time and relieve boredom," the report said.

Precisely which goods will benefit most from the predicted spending surge remains uncertain as consumers decide whether "new and sticky" elements of their pandemic lifestyle will endure, said Urminsky.

'It's plausible that people invested in good coffee machines and don't plan to go to Starbucks.'

Oleg Urminsky, professor at The University of Chicago's Booth School of Business

"It's plausible that people invested in good coffee machines and don't plan to go to Starbucks," he said.

Almost 30% of respondents in the McKinsey study said they made substantial changes to their homes during the pandemic, such as a gym or a workspace, creating options for remote work and at-home exercise.

Apparel, cosmetics and department stores, which were depressed by pandemic restrictions, are showing signs of recovery, McKinsey found.

82.85% Increase in foot traffic to restaurants, retail stores and entertainment venues in the New York City metropolitan area in June compared with Jan. 1, according to Zenreach

Despite the rebound in brick-and-mortar stores, Schmitt, the Columbia marketing professor, said the shift toward digital shopping will continue.

The implication for main streets on Long Island and elsewhere: "Some shrinkage in retail stores," he said, but increased innovation among the survivors.

The store of tomorrow will weave entertainment into the retail experience and go mobile, moving from location to location, Schmitt said.

The report by EGC found that shoppers are spending less time browsing in physical stores.

"We're seeing an overall decline in people wandering in stores," Penn said. "People are going in and getting out."

That means businesses should invest in digital marketing and do everything else possible to ensure they are on the consumer's shopping list, she said.

The reshaped consumer is being "pulled in a lot of directions," Schmitt acknowledged. "It's really a moving target."

A couple of key indicators that will signal whether Americans are ready to return to pre-pandemic communal life: the salad bar and the movie theater.

"I'm curious whether we'll ever go back to salad bars," Urminsky said. "[And] the million-dollar question for the movie industry [is whether patrons will want to] sit shoulder-to-shoulder with a bunch of people sharing popcorn."