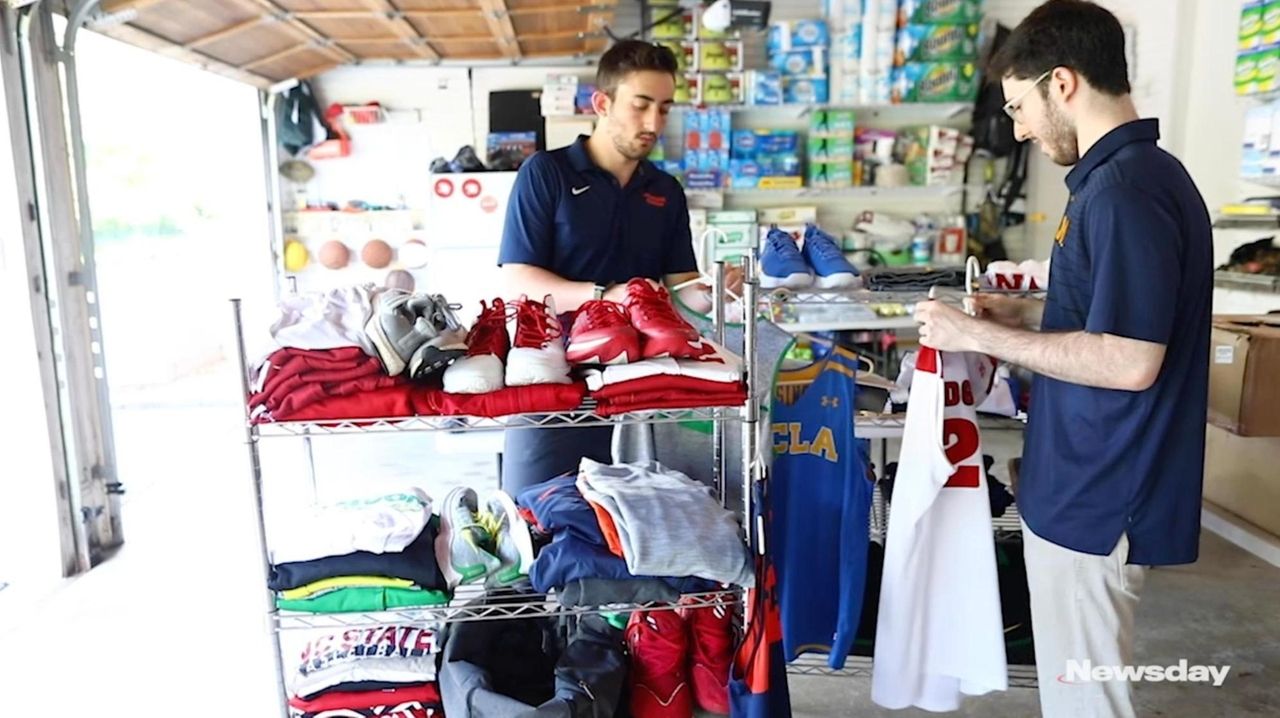 Hunter Pomerantz and his brother Austin, two of the co-founders of The Players Trunk LLC, sat down with Newsday on Monday to discuss the online marketplace they created to sell the team-issued gear of former college jocks. Credit: Newsday / Chris Ware

Five former and current students at loose ends during the pandemic restrictions have created an online marketplace to sell team-issued gear of former college athletes.

Two of the co-founders, Hunter and Austin Pomerantz, have commandeered their mother's Old Westbury kitchen to run the business: The Players Trunk LLC (theplayerstrunk.com).

Hunter Pomerantz, 22, said he and his brother have been spending long hours texting former athletes to persuade them to list their gear on theplayerstrunk.com instead of posting it on Instagram or elsewhere.

Pomerantz said that within days of its July 2 launch, more than 10,000 people had visited the site and retired NBA star Dwyane Wade and former Duke basketball player and ESPN analyst Jay Bilas both tweeted praise for the new business.

"The response in the first five or six days has been tremendous," he said. The appeal for former college athletes is that the specialized website attracts more serious buyers, he said.

"We take the hassle out of it for them."

At the same time, they are seeking to heed NCAA rules that bar student athletes with remaining eligibility from selling equipment.

"For us, it's making sure we don't get gear from guys who are still on the roster," he said.

Indirectly, the COVID-19 economic shutdown was the mother of the website's invention.

On the morning of March 12, as the Syracuse University men's basketball team was preparing for a prime-time ESPN game against Louisville in Greensboro, North Carolina, coach Jim Boeheim announced the conference tournament was canceled.

Hunter and Austin, 20, had internships lined up, and Austin's roommate, rising senior Jason Lansing, 21, of Chicago, planned to stay in Ann Arbor as head manager of the basketball team.

But as the coronavirus shutdown lingered, Lansing and Austin Pomerantz recalled one of the business ideas that they had brainstormed: selling team-issued college gear.

As the idea shaped up, they added two Michigan basketball players as co-founders: Matthews, 23, of Chicago, whose team lost in the 2018 NCAA finals to Villanova and who is recovering from a torn anterior cruciate ligament, and Zavier Simpson, 23, of Lima, Ohio, who hopes to be chosen in the NBA draft rescheduled for October.

"We had extra time on our hands with COVID," Hunter Pomerantz said. "Three or four weeks later, here we are."