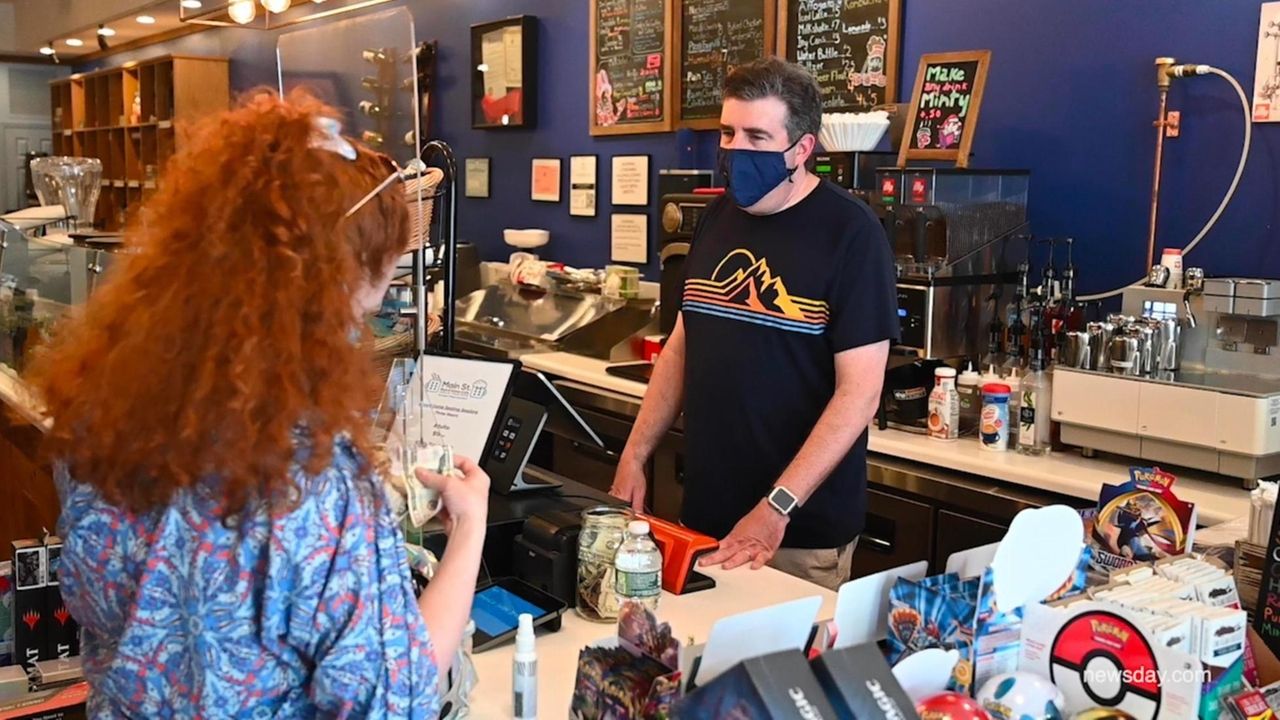 Business owners such as Neil Goldberg, owner of Main St. Board Game Cafe in Huntington, have had to raise prices to make up for lost revenue due to COVID-19. Credit: Newsday / Steve Pfost

For shops reopening on Long Island, planning is all about subtraction: Fewer tables at restaurants, fewer chairs in salons, and fewer customers ready to brave the new marketplace.

But in one area — the expense section — addition is common.

In many cases, survival depends on raising rates for customers.

After shutting their brick-and-mortar locations, many businesses resumed with more expensive safety equipment and cleaning practices. They opened under social distancing protocols that typically cut their capacities in half. Even when companies can extend their hours, owners say serving the same number of customers may remain challenging while economic and health concerns keep regulars at home.

Prices are most likely to rise for services that consumers can't replace online, such as haircuts, restaurant meals, hotel stays and workouts at well-equipped gyms, according Stacey Finkelstein, professor of marketing at Stony Brook University.

"Consumers want to know that businesses are looking out for them," Finkelstein said. "There are people who are willing to pay the price, recognizing that the higher price means that fewer customers can come in, and there's more manpower dedicated to making sure the space is sanitary."

Higher rates have already shown up at barbershops and salons.

King of Blades Barbershop added $5 to all its prices when it reopened in early June, according to owner Juan Munar. He said the move was necessary because the Farmingville shop's barbers can now each serve about 9 or 10 clients a day, as opposed to 15.

Munar said purchasing masks and other protective gear has been difficult and expensive.

Many customers understood the increase, but Munar suspects some have not come in because they do not have money for grooming right now.

"It's been a little challenging," said Munar, 31, a Centereach resident. "We've been losing a lot of customers. … We've been getting a lot of new customers, too."

In Baldwin, Natashia Jeré considered raising prices at her salon, Jeré Hair. But after not working for three months, Jeré said she was aware of the financial difficulties many are experiencing. So she decided now is not the time.

"The way things are going right now with the economy, it might be necessary to just maintain some type of normality," said Jeré, 34, a Hempstead resident.

What the 'math dictated'

Customers recognize that Main St. Board Game Cafe had to raise prices, according to Neil Goldberg, who opened the Huntington Village business about a year ago.

Before COVID-19 hit, the cafe survived off revenue from three sources: food and drink service, board game sales and admission for private playing tables and events. For much of the pandemic, retail has had to carry the entire enterprise, Goldberg said.

While closed, the cafe created an online sales tool. A couple of customers requested to purchase and donate games to local hospitals. This inspired Goldberg to launch a donation drive, during which consumers spent about $13,000 on items sent to front-line medical workers and patients.

But as the region started to reopen, Goldberg realized he would need to limit occupancy and that events — a major source of revenue — would not be viable for quite some time. He alerted customers in late June that reserving a table for three hours would now cost $10 per kid, compared with $5; and $15 per adult, compared with $10. Food and retail prices remain the same.

"This is what the math dictated. We’re a small business, and we can’t absorb losses like a large business can," said Goldberg, 46, of Woodbury. "We had to put our own business out of business, wait three months and then resurrect it from this hibernation state, and that costs money."

Restaurants are particularly aware of how sensitive people are to prices, according to Shelby Poole, who has been coordinating calls about the pandemic among Long Island members of the New York State Restaurant Association. Poole said restaurants have resisted raising prices because eateries are competing for a smaller pool of in-house diners and because takeout consumers are paying the same amount for a product that comes with less service.

One exception, she said, is some venues have upped prices on third-party apps like UberEats, where the fees charged to establishments can be as high as 30%.

Poole, 39, sees the challenge at two restaurants her family operates: Jackson's in Commack and Morrison's in Plainview. The St. James resident believes the establishments "gained equity" in the area by staying open and offering delivery. But Poole said costs have risen 30%: more money goes to front-of-the-house staff, who can no longer rely on tips, and the cost of certain ingredients and safety gear has increased.

Revenue is down about 50%, even with outdoor dining and limited in-house service resuming, according to Poole. For now, her team is testing fast-casual-style service, promoting mini-catering packages and searching for cheaper takeout supplies.

"Based on my restaurant industry calls," Poole said, "it's pretty much across the board. … You feel like you had a really good day if you broke half of what you broke the year before. It's not a good landscape."

She said she expects restaurants may raise prices as assistance offered through the federal Paycheck Protection Program expires.

"We have a little bit of a protective shell right now," Poole said.