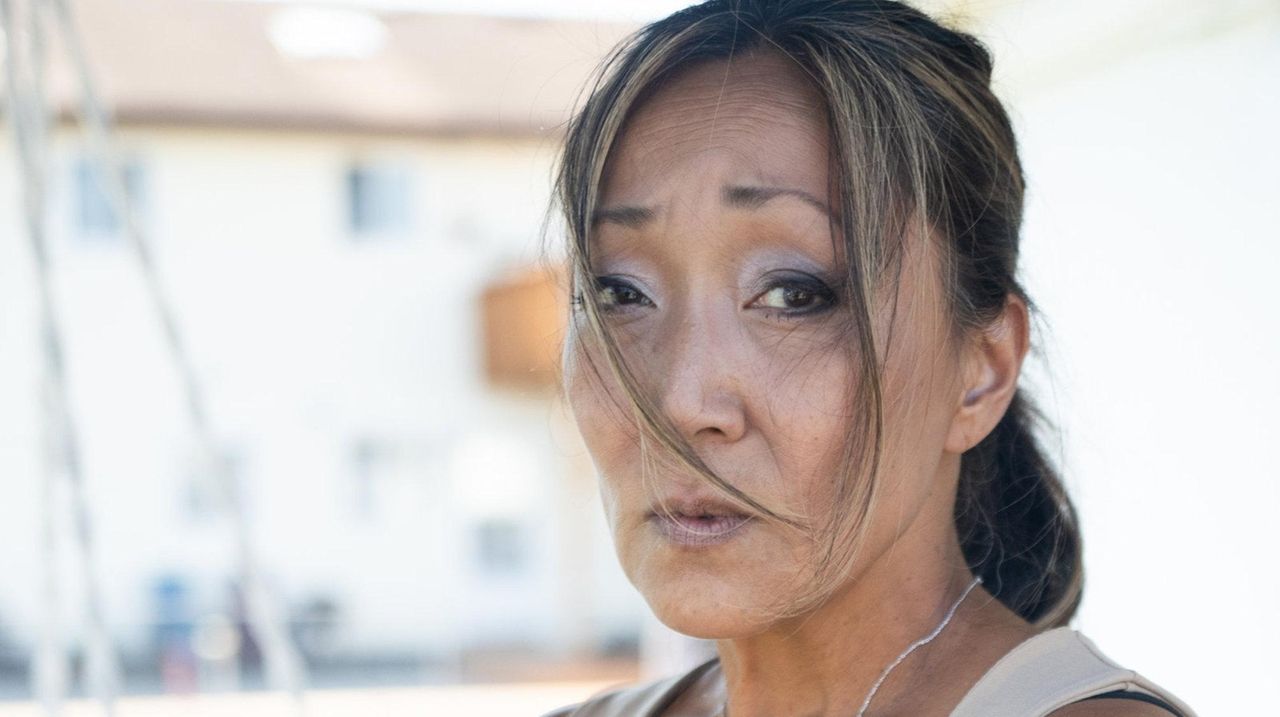 Sue Anne Konkle, of Lindenhurst, had been holding down two part-time jobs, but her employers dramatically scaled back their operations and have not been able to give her work shifts. On Monday, she talked about her struggles to make ends meet.  Credit: Kendall Rodriguez

An out-of-work bartender in Lindenhurst borrows from friends for it. A furloughed furniture store manager from West Islip digs into her retirement savings for it. And despite working 40-hour weeks, a single mom from Lake Grove does not know how she'll come up with it.

Rent remains a top concern for many Long Islanders, despite a moratorium on evictions.

Housing courts closed early in the pandemic and the governor issued a moratorium on evictions March 20. The state court system announced Aug. 12 that warrants of eviction cannot be executed until Oct. 1. But months into restrictions on business operations, struggling renters are growing anxious as they scour sparse job listings and watch the government curtail aid.

"I pay my rent. I borrow money from every one of my friends," said Sue Anne Konkle of Lindenhurst, a single mother who worked two part-time jobs until the government began limiting business operations in mid-March to prevent the spread of COVID-19. "We’re just hanging by our pinkies."

Attorneys were allowed to start filing new eviction cases beginning June 20, according to a memo from the state's Chief Administrative Judge Lawrence Marks. The Long Island legal system has started considering cases pending before COVID-19 and working through a backlog, attorneys said. Even if courts conclude an eviction is warranted, sheriffs will not enforce the decision until Oct. 1.

Eviction filings remain low compared to 2019, according to Vivian Storm, a spokeswoman for Nassau Suffolk Law Services, a nonprofit that provides free legal representation for those in need. The thinner caseload is largely due to the legal system's shutdown, and may reflect landlords filing relatively few cases in January and February.

Excluding East End courts, Suffolk County has received 1,906 eviction cases from the beginning of the year to Aug. 14, which is a 63.6% decrease from the number filed during the same period in 2019, according to the district administrative judge's office. Cases fell 61.5% in Nassau County, which recorded 1,510 eviction filings from the beginning of the year to Aug. 10, according to the state Office of Court Administration. The data includes residential and commercial eviction cases, but residential disputes have historically made up the bulk of these figures, attorneys said.

But social service providers and attorneys who represent tenants and landlords are seeing widespread signs of hardship. They expect eviction filings to surge.

"The court really is going to be confronted with a huge backlog, a huge problem," said Storm, of Huntington. "Unless the sheriff’s office hires more people to carry out evictions, they still have a limit on the number of people that they can put on the curb on a given day. So that will ultimately be some constraint."

Bradley Schnur said he and other landlord-tenant attorneys have been busy filing eviction cases since court resumed. But he said some landlords appear to be waiting to see how the government and judges handle matters.

Under the Tenant Safe Harbor Act signed into law June 30, judges may decide tenants faced financial hardship due to COVID-19, and therefore, cannot be evicted because of unpaid rent during the emergency. These tenants would still be responsible for accrued back rent, said Schnur, a Jericho-based attorney who represents smaller landlords and tenants on Long Island.

Mom and pop landlords are not faring well, Schnur said. If they were successful in winning evictions in court, these owners would be able to find paying tenants, thanks to a housing shortage and strong demand for rental homes, Schnur said.

"They're not getting payments; or it's the end of the lease and people are just not leaving," said Schnur, a Woodbury resident. "These people rely on the income not really even for profit, but to just cover the expenses of the cost of living: the property taxes, the mortgage payments and so forth."

Large, institutional landlords have not had as difficult of a time collecting rent, according to Jonathan Miller, president and CEO of the appraisal and consulting firm Miller Samuel Inc. They tend to own units at the middle and upper-end of the market, which are less likely to house the lower-wage workers who have born the worst of the downturn, Miller said.

"It's a highly polarized market," Miller said. "The landlords in rental buildings that are non-institutional and smaller are more exposed."

Tenants are going to great lengths to pay their rent. Konkle, 52, put her tax refund toward her $1,500 rent when plummeting demand left her without bartending shifts at a sports bar and serving work at a catering business. She borrowed from friends while waiting for unemployment, which took about three months. Konkle turned to them again when the federal government stopped providing a $600 a week boost in unemployment benefits.

"This is the first time in my life I’ve ever claimed unemployment; it’s $138 a week," said Konkle, who has a 10-year-old. "I’m just lucky I have friends. I don’t have any family. It’s just me and my daughter."

She’s working through an administrative hurdle that cut off her food stamps, applying for other assistance and fixing up her resume. But Konkle said she must work around child care responsibilities since paying for a babysitter would be tough. She will need to be home when her daughter attends school virtually.

"I still am very grateful," Konkle said, citing her health and supportive friends. "Someone I know died in April — April 3 — one of the 630 that day," she said, referring to the state's death rate. "It was terrible."

Tracy Kerr, 57, of West Islip, has not been called back to work as a furniture store manager since mid-March. Her part-time job teaching dance and twirling in schools also remains on hold. Kerr said her finances have grown especially tight since the federal unemployment aid ended.

"I have a couple of months before my savings would run out," said Kerr, who pays $1,400 in rent. "But I’m also years from retirement, where I’m not going to be able to have that money."

After working for the furniture company for 23 years, Kerr described the modern job hunt as overwhelming. She wonders who is reading applications submitted online. Few businesses seem to be hiring, and those that are may pay less than what she receives in unemployment, Kerr said.

"You can’t find a job doing anything," she said. "It’s just a scary situation, not knowing whether I’m ever going to find a job — or if I’ll have to find like three jobs."

Tenants are waiting for a second federal unemployment bump, which will temporarily offer many New Yorkers $300 more a week. Many Long Islanders sought assistance through a state rental assistance initiative, which is no longer accepting applications. The agency administering that program, Homes and Community Renewal, previously said subsidies — which may cover a portion of tenants’ rent for up to four months — would likely be issued by the end of summer.

Nonprofits present other opportunities. But in many cases, renters must have landlords who are comfortable submitting certain documents, which can be difficult if they are renting a bedroom or have another informal arrangement, according to Rebecca Sanin, president and CEO of the Health and Welfare Council of Long Island.

The council, which serves as an umbrella organization for groups that support vulnerable Long Islanders, has seen requests for help with rent, food and basic needs double since the pandemic hit, she estimated.

"We have tremendous concerns around peoples’ ability to stay in their homes," Sanin said. "Our region has changed from a region with pockets of poverty to pockets of wealth."

The recovery drags on

The nonprofit Economic Opportunity Council of Suffolk County helped Candace Slawinski, 31, catch up on her rent and PSEG payments in July. She is grateful, but still struggling.

The Lake Grove resident fell behind on bills when she contracted COVID-19 in early March and missed about two-and-a-half months of work. Slawinski had just started a new job, so she was not eligible for paid time off or unemployment.

"I basically had to live on short-term disability, which is like $174 a week," said Slawinski, a single mom with two children.

Slawinski said she did not pay August's rent, $2,400, while balancing general expenses, an outstanding car payment and insurance bills.

She is searching for a second job, with night and weekend hours. But openings are limited and additional work would detract from time with her 4-year-old and 9-year-old.

"I'm either going to be a zombie or I'm going to be sleeping," said Slawinski, who works in public health.

I think we could add a correction line saying something like:

An earlier version of this article included inaccurate caseload information for Suffolk County due to a calculation error in the court system.

Where to go for help:

Referrals for rent and other assistance programs

Rent and other assistance

Assistance with legal questions and concerns

Assistance with legal questions and concerns

Rent and other assistance

Rent and other assistance, with a focus on those with a path to self-sufficiency

Rent and other assistance, with priority given to people who are not eligible for government assistance and single parents

Where LI renters can go for helpMany are struggling to pay for rent, food and other basics. Here is a guide to organizations across the Island that can help.