The Shinnecock Indian Nation is on the brink of an economic transformation aimed at increasing self-sufficiency for the tribe’s 660 on-reservation members after decades of relying chiefly on government grants and its popular powwow to fund its government, health and education programs.  With the powwow, a major source of income for the tribe and its members, shut down this year by the pandemic, the search for new revenue streams takes on extra urgency.

Like the  tribe's 65-foot tall monument and digital advertising tower that now greets visitors to the Hamptons on Sunrise Highway,  the nation’s leaders are turning up the volume on a series of economic development initiatives. They include plans for  a travel-mart and convenience store/gas station on Sunrise Highway, a medical marijuana and wellness center on tribal land on Montauk Highway, and half a dozen other business initiatives involving the sale of clothing, digital media and transportation. Funding for the projects, millions of dollars in all, is coming primarily from existing tribal financial ventures and traditional bank loans, officials said.

At the same time, the tribe is continuing to pursue a long-planned move into gaming as part of a multigenerational effort to build wealth and create better paying jobs for a tribe whose unemployment rate remains higher than Suffolk County's and New York State's average. Around 60% of the tribe remain below the state poverty level.

Just this week the tribe announced a vested partnership with gaming giant Seminole Hard Rock Entertainment and Tri-State Partners to pursue casino-gaming in the state, after receiving National Indian Gaming Commission approval of its gaming ordinance, a document outlining the structure and objectives of its gaming initiatives. 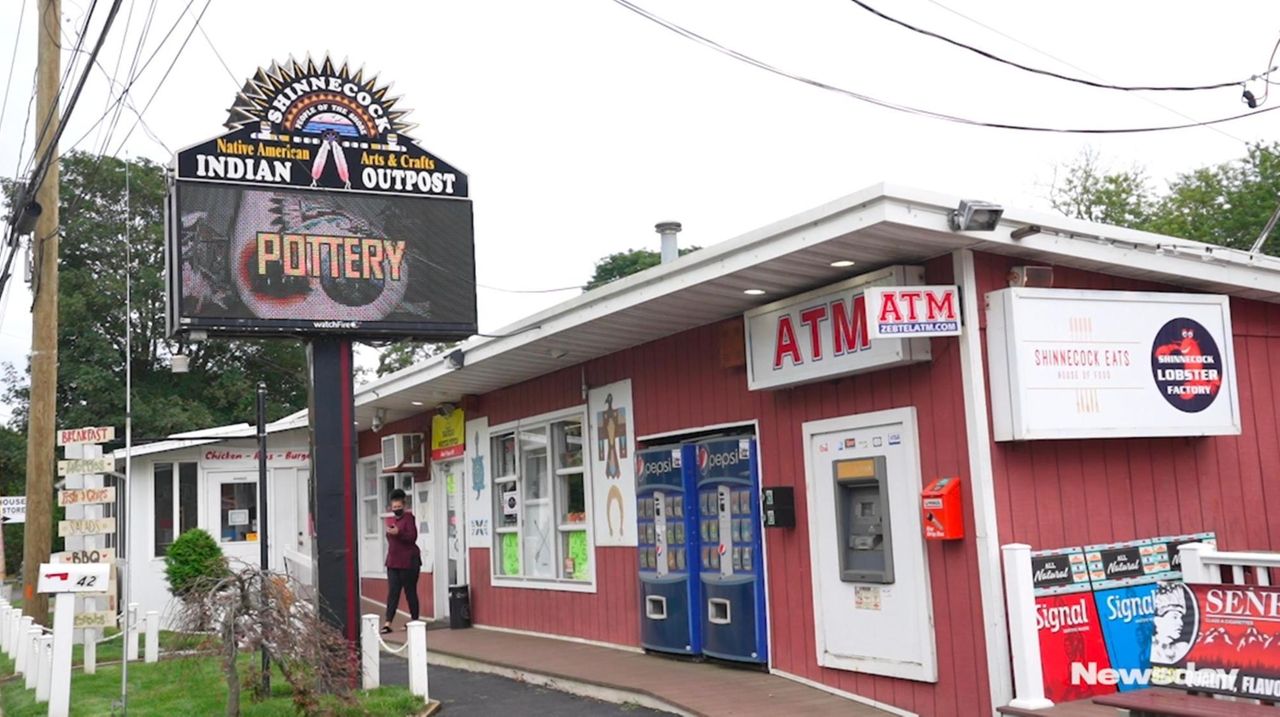 Gaming is "very much in the picture,” said Bryan Polite, chairman of the Shinnecock council of trustees.

While the COVID pandemic put some of the plans on a temporary hiatus, the tribe has managed to keep the interest of financial backers for each of the projects, he said. Site clearing has already begun for the medical marijuana and wellness center on Montauk Highway; the tribe is  working with financial and management partner Conor Green Consulting on the facility. Meetings with town officials have begun to discuss siting and design of the travel mart/gas station, which is planned for tribal land directly across from the digital billboard.

Polite, one of the main drivers of the revved up economic activity — whose family owns a tribal convenience shop on Montauk Highway and who launched the organic coffee brand, Raindrop's Coffee — said the moves are all aimed at building a road to prosperity for current and future generations of Shinnecock tribal members, all while taking control of the narrative of the tribe that has previously been dictated by outside forces.

Currently around 30% of the tribal government's multimillion-dollar budget comes from economic development projects, including tobacco distribution and advertising sales from the digital billboard. The rest comes from county, state and federal government grants, and the powwow. Polite said he’d like to see the majority come from development projects — the medical marijuana facility could employ up to 100 when a cultivation facility is up and running.

“We’ve tried very hard to diversify so that all of our eggs aren’t in one basket,” he said, noting the tribe has no tax base. “We want to see Shinnecock be sustainable … and have these multiple projects and multiple streams of revenue.”

Most of the activity is taking place through Shinnecock Sovereign Holdings, an entity provided for under federal law that extends tribal sovereignty to tribal businesses. The tribe already has an existing company called Shinnecock Sovereign Distribution that supplies tobacco products to the tribal smoke shops and draws revenue for the tribal government.

“There’s a ton of different projects we’re working on,” said David Taobi Silva, a former tribal trustee who manages a smoke shop and serves as president of Shinnecock Sovereign Holdings.

Future projects could include a hotel at the tribe’s Westwoods property overlooking Peconic Bay, and launch of a separate company called Eastern Winds Transportation to pick up and deliver large items for tribal members.

“Self-sufficiency is the catch phrase,” Silva said. “We don’t necessarily want to diminish our grant revenue stream but add to it a much more significant amount of self-sufficient revenue funds. Now we’ve done that.”

Through Shinnecock Sovereign Holdings, the tribe has already spun off a separate company called Osprey Media that operates the digital billboard, and a newly launched tribal clothing line under the Shinnecock brand.

The label, Polite said, has the dual purpose of generating revenue and giving "the Shinnecock people a sense of pride.”

The clothing line is marketed under the Osprey Media name on Instagram, Facebook and other social media outlets.

The digital billboard, too, serves not only as a generator of advertising  revenue but an unmistakable marker that the tribe has moved with a new sense of unabashed urgency in not just claiming tribal land but capitalizing on it. Osprey Media expects eventually to produce annual revenue of from $750,000 to $2 million. Medical marijuana can produce $10 million to $40 million annually, Polite said.

“If you drive down Sunrise, you can’t miss it,” Polite said of the billboard; it’s the “gateway to the Hamptons. It caused quite a big controversy.” New York State sued the tribe to block the billboard, but thus far the suit has not been successful and the monument continues to operate. Settlement talks are ongoing, tribal officials said.

More recently, the tribe used the billboard to provide free ad space for Southampton Town to deliver public service messages during the COVID-19 pandemic. It’s also been used to air long-held tribal grievances, including tribal outrage over grave desecration for development at Shinnecock Hills — territory the tribe has long laid claim to after land grabs of the past 100 years.

Like its planned powwow, which had run for 73 years straight before being shut down and replaced by a virtual event this year due to pandemic concerns, COVID has set back other plans. Osprey Media had planned to launch a division that handled large-scale concert promotions but concerns about mass events have put it on a back burner.

Fred Bess, a six-term tribal trustee and chairman of the tribe's powwow committee, said the decision to shut down the powwow "hit us hard."

But Polite said the new partnership with the Seminole Tribe's Hard Rock Entertainment group and developer Tri-State Partners gives the tribe solid partners to work with to move toward a long-held ambition of increasing tribal wealth and large-scale employment. He declined to discuss potential locations or the structure of the partnership, but stressed, “We’re still in the game, we have serious partners, and the tribe backs it fully.”

In a statement this week announcing the partnership and federal approval of its gaming ordinance, the tribal council referred to a project that would "create hundreds of jobs and a revenue stream for both the Shinnecock Nation and the State of New York."

"The Trustees recognize that there are many who are concerned about the Nation’s economic desires," it continued, "but if the State of New York works with the Nation, great things can be achieved. We ask the people of this great State to come forward and work with us to put away the ghosts of the past and a history marred with broken promises, theft, and suffering. In these troubling times everyone seeks economic growth and development. Together we can make a brighter future for the Shinnecock Nation and citizens of New York."

Polite said the tribe would like to work with the state, and potentially the counties, to find an appropriate site for a casino. Nassau Coliseum, a site formerly contemplated by the tribe before a previous county administration withdrew, appears to be off the table, said a spokesman for County Executive Laura Curran.

A casino-based entertainment facility is "not compatible with the vision our community has for the development of the surrounding parking fields," spokesman Michael Fricchione said.

The state is "currently undertaking a study to determine the economic feasibility and overall impact of granting additional casino licenses downstate," said a spokesman for the state Gaming Commission, noting a 2013 constitutional amendment paved the way for up to seven commercial casinos in the state, including three downstate. "No decision will be made until that study has been completed and thoroughly reviewed."

Polite would only say, "Our door is always open to new ideas on how the Shinnecock can enter the gaming market in New York State. Nothing's off the table."

Randy King, a newly reelected tribal trustee and former tribal chairman who says he has encountered walls in dealing with state government over tribal projects, said he worries that state officials continue to hinder projects like the medical marijuana dispensary, which needs state approval for access to a customer database, and the tribal billboard, still the subject of a state lawsuit. Silva, the former trustee, met stiff government resistance when he and his uncle Jonathan Smith attempted to harvest baby eels on tribal land.

"I do see what seems to be a holdover from year to year of the state still creating obstacles for us to overcome and I don't understand why," King said. "In this environment of racial and economic justice, we seem to have been left out of that conversation."

He added, "I'm coming into office again, and I'm hopeful we can get past a lot of this" so that "we can advance and provide for our people."

Tribal sachem Donald Williams Jr. sees the prospects for the tribe as bright despite years of obstacles.

"The pie is empty and we’re filling it, little by little," he said. ". . . We try to do things that are going to last a lifetime."

You may not see the colorful native dancers and hear the big drum in person at the Shinnecock reservation this year. But you can experience the 74th annual powwow online. The Shinnecock Nation has arranged to stream some events online. To experience the events beginning at noon Saturday, Sunday and Monday, log in to Facebook and visit the Shinnecock Powwow page, or go to nwsdy.li/shinFB.

You can also check out the festivities by searching for Shinnecock Powwow on the Vimeo video app and website.

Shinnecock Nation by the numbers

Tribal members: 1,587, including about 660 on reservation