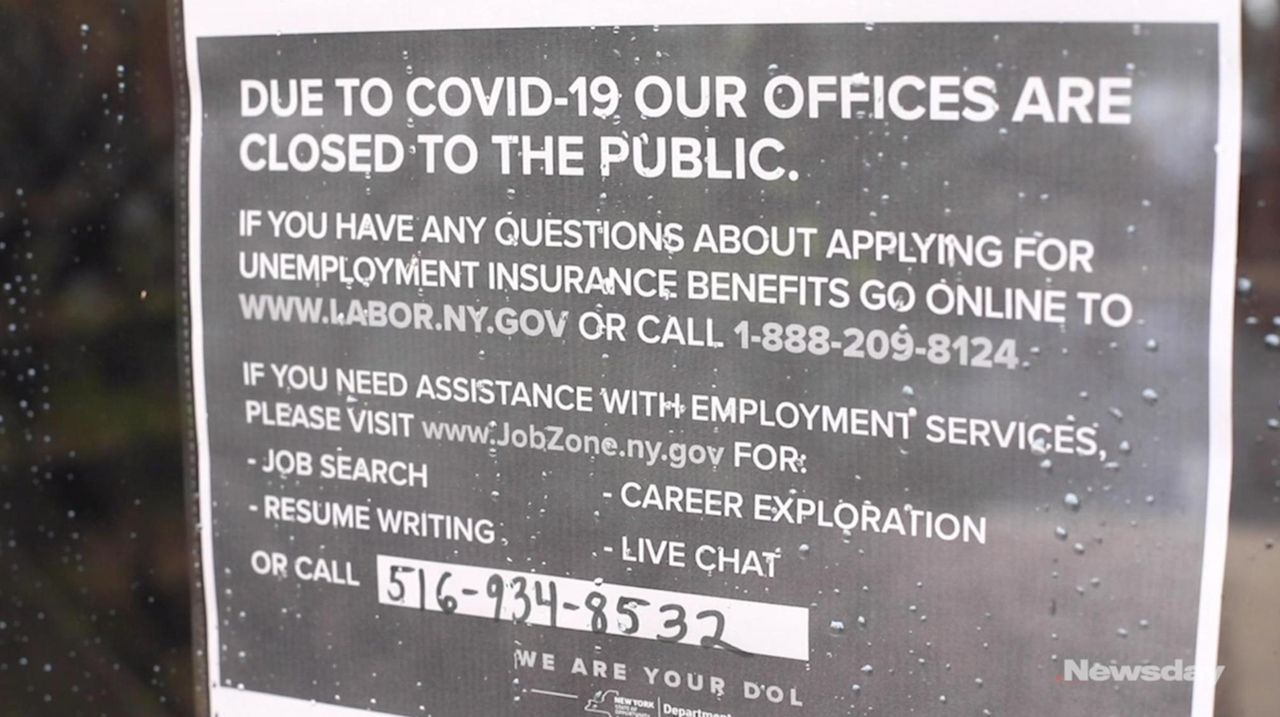 When the coronavirus pandemic largely shut down commerce last month, tens of thousands of Long Islanders lost their jobs, but they took solace in knowing they would qualify for unemployment benefits.

Getting those benefits has been a formidable test of people's patience. The state Labor Department's process required that many applicants speak to a representative to finalize their paperwork, but the system has been overwhelmed with callers like Barbara Levine of Oceanside.

Levine is a person who prides herself on her persistence. She's 89 and still drives, still works and doesn't just take no for an answer.

"I'm very pushy," said the woman who was laid off from her telemarketing job at an insurance company after 22 years on March 13.

Her daughter helped her fill out the online application, but when she got to the end, there was a catch. To be approved, she had to speak to a representative of the Labor Department.

That sent her down a rabbit hole for the next three weeks, calling again and again — 50 times a day — and never getting through.

If anything, the calling has gotten worse, she said. When she started, the phone would ring and a kind recorded voice would say no one was available.

Now it's just the incessant baaa baaa baaa of a busy signal, she said.

The frustration creates another level of stress at a time when people are already worried about encountering some invisible bit of the coronavirus on the next thing they touch.

Levine is self-isolating in her home and her daughter is bringing in the groceries. But every half hour she's back on the phone, trying again.

More than 55,000 Long Islanders filed claims for unemployment benefits in the week ended April 4, a 3,715% increase over the number of claims filed the same week last year.

“I apologize for the pain — it must be infuriating to deal with,” Cuomo said in March.

To meet the demand, the Labor Department said it has used a two-pronged strategy to reduce volume and increase capacity.

To reduce demand, the agency said it is reminding people that delayed claims will still result in them receiving their entire benefit, starting from when they were let go.

The agency Thursday announced it would implement a new application process  Friday that will allow most filers to complete their applications online without a phone call.  Filers in Levine's position are now directed to stop calling and wait for a call from an agency staffer.

When David Davidson temporarily shut down his vintage guitar store in Farmingdale in mid-March, he was optimistic the business could still get by with online orders.

COVID-19 showed him he was wrong.

"The whole world came to a stop," said Davidson, 56, of Massapequa.

He's decided not to lay off his three employees, believing "we didn't want to take food out of anybody's mouth."

One saving grace was that he believed he qualified for unemployment benefits, thanks to the expanded eligibility that allowed benefits to the self-employed.

The trouble started as soon as he got online to fill out the unemployment form. He'd get three pages in, and get kicked off. Then he'd get 5 pages in, and the same thing, he said. Finally he completed it over an automated phone line, only to be informed he needed to speak to a rep.

At the same time, he applied for a Small Business Administration loan, but believes that will take weeks to come through.

His daughter, who shares the business with him, is going through the same experience.

"I'm bleeding out," he said, noting he has thousands of dollars a month in expenses.

When Alisha Koenig isn't making another attempt to get through on the phone to the Labor Department, she's calling the electric company, her cellphone company and credit card company to postpone paying her bills.

"Everything is tight," said Koenig, 35, of Brookhaven, who lost her job in customer services for an interior design company on March 20.

She added, "If it goes into next month, it's going to be super-tight."

As it is, she has her husband and two kids "minimizing everything" — which means turning off lights around the house and skipping splurges at the supermarket.

Her husband is still working as a cooling and heating engineer at a hospital, so the mortgage is being paid. But any extra expense is felt keenly, she said, such as when her 4-year-old daughter, Danica, rolled off the sofa the other day and broke her collarbone, requiring medical care.

The unemployment benefits would help, she said.

"It's crazy," Koenig said. "Some of my friends got into the system and were done in a half hour. This is my third week and I can't get through."

Nathen Christian's bank account is down to minus-$70, due to some overdrafts.

He's been calling to finalize his unemployment benefits with an urgency close to desperation. He estimates he's been dialing in 200 times a day for two weeks.

Christian, 26, of Coram, was let go temporarily March 18 from his job as a designer of home theaters and lighting systems.

For now, he's looking hard at his car payment, phone bill and car insurance. That's not to mention putting food on the table for him and his dog Emma.

"New York State is spending so much money," Christian said about the expenses associated with coronavirus, “and they don’t update the system.”

Kristyn Lawson finally got through.

The 24-year-old waitress said trying to reach a state Department of Labor employee who could help her apply for benefits was a job in itself.

She worked her last shifts at an IHOP in Farmingdale and a Red Robin in West Babylon on March 14.

After sitting in front of her computer for days refreshing the screen more times than she can count, she was able to submit her application online.

“It’s a bit frustrating because I know at work, I could make that much money or more in two or three days,” she said. “It’s helpful but it doesn’t come close to covering all of our expenses.”

Her boyfriend, Josh Campbell, 20, also a restaurant server, applied for benefits at the same time Lawson did but has yet to receive any payments.

The two live together in a two-bedroom apartment in West Babylon for which they pay $1,800 a month.

“Our livelihoods were tips,” she said. “With restaurants closed to the public and with everything that’s going on with the virus, I felt upset …. scared. Everything was taken away from us. But of course, we’re grateful for this help.”

State revamping jobless claims filing processApplicants who previously filed online and were unable to get through by phone should stop calling. DOL will call you, officials said.