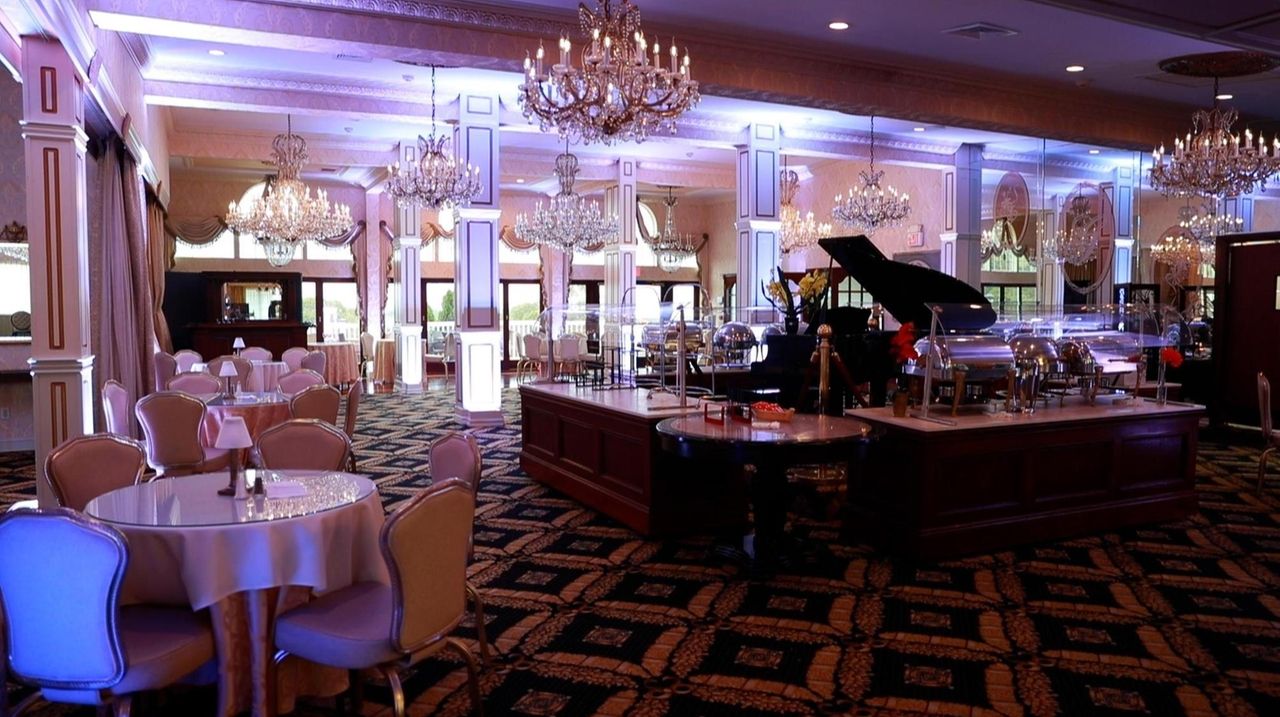 Giorgio's Baiting Hollow is one of many catering halls whose business has been decimated by COVID-19. Co-owner George Regini spoke with Newsday's Daysi Calavia-Robertson on Oct. 26. Credit: Newsday / Raychel Brightman

Long Island’s catering venues are struggling to survive as they face the prospect of rising infection rates keeping full-scale weddings on hold well into next year.

While many are marketing new "micro-wedding" packages to conform to the state’s 50-person limit on social gatherings, all are facing sharply reduced revenue and calendars scrambled by rescheduling and uncertainty. Then there are the unhappy customers demanding their deposits back and the threat — for venues that fail to comply with capacity limits and social distancing rules — of being fined or having their liquor licenses revoked.

And on Wednesday, Gov. Andrew M. Cuomo announced yet another regulation: Any facility with a liquor license must close at 10 p.m.

The new rule is "onerous . . . and a cause of a lot of anxiety," said Michael Bohlsen, co-owner of the Bohlsen Restaurant Group, which includes wedding venue The Harbor Club at Prime. Other regulations aimed at stopping the virus’ spread, like mask-wearing and social distancing, make sense, he said, "but not this. . . . So, diners are safe [from COVID] at 9:50 but not 10:01?"

It’s all added up to a lot of lost business.

Of the 150 wedding receptions Giorgio’s Catering in Baiting Hollow had on the books for 2020 at the beginning of the year, only 10 have taken place, said co-owner George Regini, whose father started the business nearly 30 years ago.

"In a normal year, we’d have five, maybe seven cancellations at the most," Regini said. "But, of course, nothing about this year has been normal."

Most couples decided to move their weddings to 2021, he said. But now, less than two months shy of the new year, Regini and co-owner Nick Cascio worry that, without a readily available vaccine or viable COVID-19 treatment in sight, all of the venue’s rescheduled wedding receptions are again in jeopardy.

"What happens then?" Regini said. "If this goes on into mid-2021, we won’t be the only ones in trouble. A lot of catering halls will go out of business."

The average cost of a wedding ceremony and reception on Long Island is $66,409, nearly twice the national average of $33,931, according to The Knot, a wedding resource website in Bethesda, Maryland.

In an average year, the New York State Liquor Authority suspends the licenses of about 30 businesses, rarely for capacity infractions, authority official William Crowley said. But since the start of the pandemic, the agency has suspended the licenses of more than 200 establishments for capacity violations.

Giorgio’s was stripped of its liquor license for hosting a Sept. 25 reception attended by 95 guests — nearly double the number allowed.

Cascio said the event was not a wedding but a "dinner party" for a newly married couple, allowing the venue to operate like a restaurant, at 50% of its 513-person capacity.

While LI restaurants are allowed to operate at 50%, catering halls and other event spaces must adhere to the 50-person limit.

Giorgio’s had its liquor license reinstated after forking over $10,000, Crowley said.

"We’re in a tough spot," Regini said. "We’re . . . doing our best to figure things out for ourselves, our employees, and our couples, and learning as we go."

For the time being, Giorgio’s is "managing" thanks to a Paycheck Protection Program loan, he said, adding that, while helpful, it’s "a Band-Aid."

In October, Regini joined hundreds of LI catering hall owners and employees at a Hauppauge news conference urging Gov. Andrew M. Cuomo to allow venues to host parties at 50% capacity or raise the limit of allowed guests at social events to 150.

"All we’re asking for is a level playing field with restaurants," Regini said. "It’s hurting us because we’re losing business to them and losing business is something we just can’t afford right now."

But with COVID-19 spikes in other states, clusters in New York, and the risk of a second wave on the horizon, an increase in the number of guests allowed at social gatherings is unlikely, Cuomo spokesman Jack Sterne said.

At restaurants, patrons generally stay at their tables separate from other diners, and are less prone to mingling than wedding guests, who typically know each other, he said.

"As we’ve seen in weddings across the country, including in New York, large events dramatically increase the risk of COVID and can easily become superspreader events," Sterne said.

"We understand some folks may be unhappy with these rules but better unhappy than sick, or worse."

On Long Island, several events with more than double the legal limit of guests have been called "superspreaders" by state and county officials.

Most recently, an Oct. 17 wedding at North Fork Country Club in Cutchogue with more than 113 guests, was linked to 41 coronavirus infections. The event also led to 159 people quarantined and the temporary closure of in-person learning at several schools.

At weddings, and other functions with large guest lists, the risk of contracting or spreading the virus is high for many reasons, Dr. Bruce Polsky, chairman of medicine at NYU Langone Hospital-Long Island in Mineola, said.

"There’s people from various households, from different states. . . . There’s people greeting each other, hugs and kisses. People coming together, sometimes with little social distancing, for hours. . . . It’s a dangerous scenario."

Many couples anxious to say "I do" didn’t let COVID-19 restrictions give them cold feet. Some turned to Zoom to share their special day, while others arranged intimate backyard weddings with just a few guests.

Venues quickly adapted with their own versions of Plan B. Some are marketing "micro-weddings;" others have turned their spaces into restaurants offering outdoor dining, and in the case of one entrepreneur, made the shift from catering business to grocery delivery service.

Bohlsen said the Bohlsen Restaurant Group, which he co-owns with brother Kurt, has made several pivots.

"It’s been a rough year for everyone, but we’ve kept it going with a mix of pivots and positivity," he said. In April, the Bohlsens partially transformed Tellers, their popular Islip steakhouse, into a butcher shop selling prime cuts of meat.

They later crafted packages for micro-weddings at The Harbor Club at Prime, the group’s Huntington wedding venue, designed to "make brides feel that having a dream-worthy wedding is still possible."

"The idea was to make the changes we made . . . reinventing cocktail hour, setting up multiple stations displaying different appetizers in lieu of passed hors d’oeuvres to minimize contact, things like that, feel like real improvements," Bohlsen said, so the couple doesn’t feel cheated, but rather that they will have "a beautiful, memorable day that’s possibly even better" than what they’d originally had in mind.

The Bohlsen Group, which includes nine restaurants, is, "despite an initial dip in business, lucky to be uniquely positioned during this dark time," he said, adding that his eateries have seen an uptick in dinner parties for recently wed couples.

"Tellers is right down the street from town hall, a lot of our restaurants have the capabilities for outdoor dining, which is something many guests still prefer, so in a lot of ways all those things have worked in our favor," he said. "But as the owner of a wedding venue, I’m clear that were it not for the restaurants, we wouldn’t be able to make it."

The Harbor Club is currently booking "full-sized" weddings for 2021 and 2022, "but let’s see what happens from now until then . . . there’s too many balls still up in the air," Bohlsen said. "The whole wedding landscape has changed."

Switching out of catering

Jean Mackenzie, owner of catering company Seasons of Southampton, wasn’t about to just stand by when wedding cancellations left the caterer with business all but gone.

Two months ago she hired a new chef and staff with restaurant experience and turned her catering hall into a restaurant, the Seasons. The change, she told Newsday last month, was a way to keep her business going and her employees on the payroll.

Andrea Correale, owner of Elegant Affairs Catering, had a similar goal in mind when she launched Elegant Affairs’ "Grocery and Dinner Delivery" service in April.

"Crisis mode doesn’t mean sitting around and crying," she told Newsday at the time.

For some, it means thinking outside the box or even reinventing the whole box.

The answer to the question "what’s next?" for some wedding professionals is simple: "something else."

Celebrity wedding and events planner Michael Russo, a 15-year wedding industry veteran, said when his full agenda of fancy parties for high-profile clients suddenly "cleared up," he took it as an opportunity to do something different.

But many are unwilling to turn away from the industry they love, despite an uncertain future.

Owner Lenea Green said business at With All My Heart, her floral wedding boutique in Wading River, is down 70%. Some weddings "have already been set back three or four times," she said.

Deposits on future events, which have long kept wedding vendors in the black, are now few and far between. "There’s a lot of inquiries but, in the end, no one wants to make a deposit," Green said. "They’re all too afraid, which I get." A Paycheck Protection Program loan for nearly $30,000 has helped her hang on.

Weddings in 2021 will reflect major changes in the industry as a whole, according to Maryland-based WeddingWire, an online marketplace connecting engaged couples with local wedding professionals.

Trends like multiple, small-scale celebrations instead of one large one, individual plates of hors d’oeuvres or charcuterie boards handed to each guest to replace crowding around a server or food station, and stand-up comedians or celebrity impersonators, to entertain guests while keeping them seated at their tables, will become the norm in the new year, according to the site.

Bohlsen said the wedding business of the future "may look different, but it’s going to survive.

"We’ll adjust. We’re resourceful and creative," he said. "We’re not the type of people to go down without a fight."