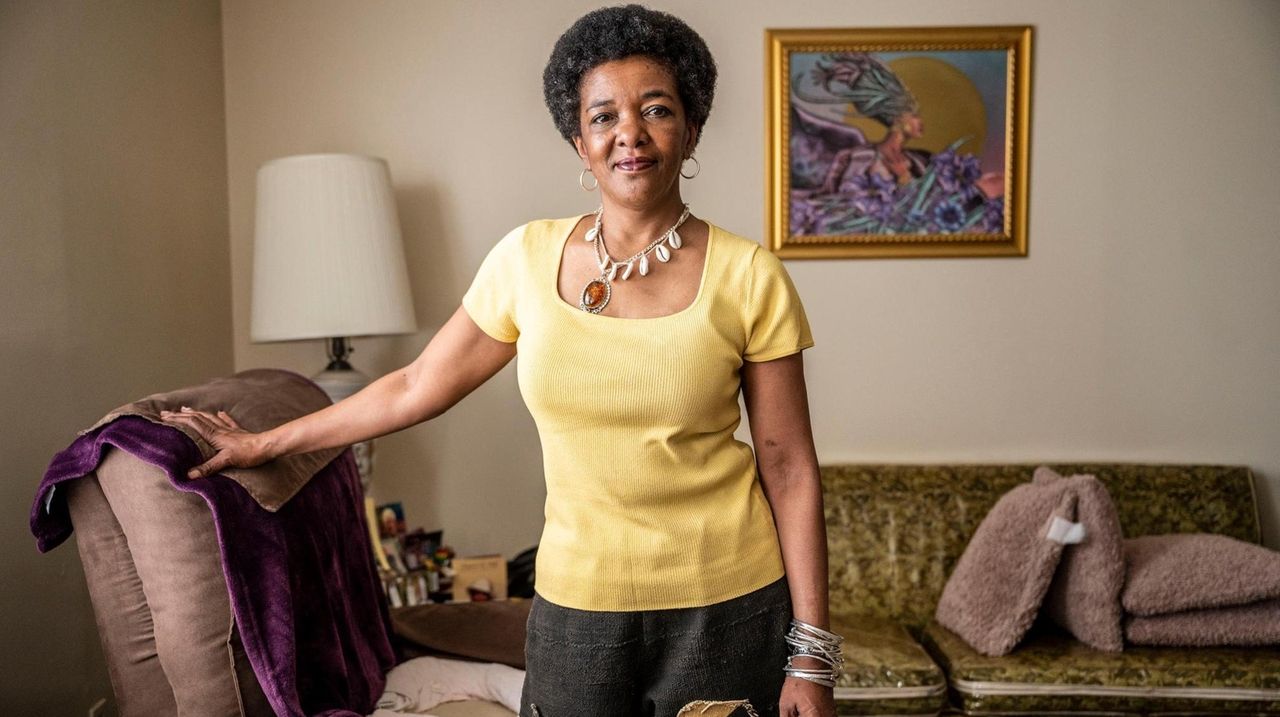 The pandemic's disproportionate financial blow to women, and especially women of color, is likely to be felt for years to come, leading many economists and policy experts to refer to this moment as a "she-cession."

Women suffered 55% of the 9.6 million net layoffs caused by the pandemic, according to a January report from the National Women's Law Center. Hundreds of thousands more were forced to leave the workforce to care for their children when schools went remote and day care centers shuttered.

The unemployment rate for Black women last month was 8.7%, far above the nation's overall jobless rate of 6%, according to U.S. Bureau of Labor Statistics data. For Latinas, the rate was 7.3%. In contrast, the jobless rate for white women was 5%.

On Long Island, the labor force — the sum of all employed residents and all those unemployed but looking for work — dropped by 71,100 from August to September. Local data does not break out labor changes by gender, but Shital Patel, labor market analyst in the state Labor Department's Hicksville office, said patterns at the national level showed that women, in response to their kids' remote schooling, were more likely than men to leave the job search at the start of the school year.

Those blows, combined with longstanding economic challenges facing women, mean the economic recovery is likely to take longer for women than men, the experts said.

"COVID has been hard on women because the economy is hard on women," Martha Ross, senior fellow with the Brookings Institution, said last month during a panel on the pandemic’s disproportionate impact on women’s employment.

The virtual event, hosted by the New York Federal Reserve, included presentations and new research all pointing to a tougher job market for women than men, especially for mothers and women of color.

"This virus is really good at taking existing tensions and just dialing them up," Ross said. "The problems facing women in the economy have been obvious for a long time, but they’ve been inconvenient to address because they’re so baked into the general operations of our economy and our society."

The pandemic has put a spotlight on the inequities and social strains placed on women and runs the risk of being a step backward in terms of women’s participation in the labor force, said Rebecca Sanin, president and CEO of the Health and Welfare Council of Long Island and a candidate for Huntington town supervisor.

Looking back at the impact World War II had on bringing women into the workforce, Sanin said it’s important that policymakers and business leaders don’t allow the pandemic to undermine the progress made by women.

"We need to really be mindful that the disproportionate impact on women doesn’t result in reduced representation of women in the labor force," she said. "We should really use this moment to catalyze conversations about work/life balance, and to create models of work going forward that recognize the needs of families and the needs of the workforce."

Lack of affordable child care, a gendered wage gap, and a disproportionate presence in low-paying, service-oriented jobs are all preexisting conditions that have put women in a tougher spot during the pandemic, experts said.

Women make 82 cents for every dollar a man makes, according to the Bureau of Labor Statistics.

The wage gap for women of color is even larger. Black women make 63 cents for every dollar a white man makes, and Latina women make just 55 cents, according to an analysis by the National Women's Law Center.

Before the pandemic, 46% of working women ages 18 to 64, or 28 million women nationwide, worked low-wage jobs with median hourly earnings of $10.93, according to research by Ross. Thirty-seven percent of men worked low-paying jobs.

The data is more striking for women of color.

"Many of the people who do low-wage work are people of color," said Mary Anne Trasciatti, director of labor studies at Hofstra University.

A lot of the lowest paid jobs — jobs that put workers in vulnerable situations because of exposure to COVID — got cut, Trasciatti said. "A lot of these jobs are held by women and many of them by immigrant women and Black and brown women born here in the U.S."

While women as a demographic are facing economic challenges through this recovery, it's important to recognize the specific hurdles faced by marginalized groups, she said.

"The category of women is a really broad category and within that category we have to respect class, racial and ethnic differences," she said.

With high representation in industries that were shuttered during the pandemic, like hotels, dining and retail, women faced the brunt of job losses. And because the return of many of those jobs is uncertain, women may have to pivot to new lines of work.

At the start of last year, Talaya Harrington of Coram started her "dream job" working as a nursing station clerk in the ER department of a local hospital. But after she began experiencing severe headaches last summer, which led toabsences, she was let go in September, she said.

Harrington, a single mother of six children ranging in age from 9 to 24, said she’s been out of work since, though she's since started taking online courses to become a paralegal.

"I’ve gone to job interviews so many times," Harrington said. Using Indeed and Facebook to find and apply for job openings, she said the process grew more and more frustrating as opportunities failed to materialize.

Even before losing her job, stress over child care was already mounting at home. With her younger kids attending school remotely and her working, she had to lean on her older children for help.

"It’s a good thing that I have older kids and they’ll be home with the younger ones…so I had my 19-year-old at home," she said.

Once she lost her job, she was home with her kids, but was trying to balance her own college work as well as launching her own custom clothing business, Smoking Diamondz, all while helping the kids with school.

"It was frustrating because they had their work and I have my work that I’m doing in college," she said. "I’m already having a hard time focusing. It was just hard on me."

Like Harrington, many women on Long Island and across the country have struggled with child care throughout the pandemic.

"Women tend to do the majority of care work for children and older family relatives," said Trasciatti. Even if "you’re one of the lucky [women] that can work from home," if your children are not going to school, "that’s a double burden," she said.

For many working families with young children, child care centers became potential COVID risks. And for those with older kids, the unpredictable closures of schools meant worrying about child care again.

"There were major problems and challenges with the system prior to the pandemic," said Jennifer Rojas, executive director of the Child Care Council of Suffolk Inc.

Child care is expensive, but at the same time, wages for child care workers, most of whom are women, are low, she said.

The median wage for child care workers in New York was $13.58 in 2019, according to data from UC Berkeley. That year, 19.3% of early childhood workers lived below the federal poverty level.

"It’s not necessarily a viable business model without additional investment from somewhere," Rojas said. "The core of it is that parents can’t afford it, there’s not enough of it, and the people working in the industry itself are really undervalued."

The pandemic has brought a pause to career gains and advancement for women who've lost jobs or left jobs to care for kids.

Many women already lose valuable work experience and opportunities to advance in their prime working years because those early career years often overlap with the time women are having children. Add to that the missed retirement contributions to 401(k)s and other savings as a result of pandemic-induced layoffs, and the risk of long-term economic hurdles grows, Trasciatti said.

"They will be further hobbled in their ability to find jobs after this and will be financially impacted by lost wages or contributions to any kind of retirement fund," she said. "It’s not like once the pandemic is over women are going to be able to pick up where they started."

Tammy Matta, 54, of Centereach lost her high-ranking human resources job in December as a result of the pandemic. Since then, she’s sent out more than 545 resumes on online job boards and networking sites like LinkedIn, Glassdoor and Indeed.

"I’ve been doing this for 20 years and have a fairly strong, long background … and have a variety of industries behind me that allow me to tap into different kinds of companies," Matta said. "I have never been out of a job this long. Ever."

Matta, whose job put her in the same shoes as many hiring managers, said the search for the next opportunity has been frustrating. Employers’ "response to applicants is horrendous" and the openings aren’t paying what they should, she said. "The companies that are coming back … they are very hesitant to pay the salaries that they used to pay because they themselves don’t have the money."

Although Matta said the job search has been frustrating and has taken the wind "out of my sails," a recent interview has made her more hopeful.

Lauren Breland of Huntington Station was gearing up to launch her own consultancy last spring before being laid off last March.

When not working her part-time job at a mentoring nonprofit, she hired freelancers to develop her own business’ website and scheduled launch events for later in the year. Then everything came to a screeching halt.

"February I was booking workshops and trainings for my business, which worked well around my part-time job. Then bam. COVID hits," said Breland, who came from a 30-year background in nonprofit human services administration. "Every conference, workshop or opportunity that I had lined up from April to May was cancelled."

To make matters worse, because Breland hadn't been at her part-time job long enough, she didn’t qualify for unemployment insurance.

She said she’s been able to do a few odd jobs and has helped community members and received "tokens of appreciation," but is still struggling financially. She’s behind on rent but luckily is friends with the landlord.

"I’m not accustomed to asking people for things," she said. "Pride won’t let me go hungry, but pride will make my stomach grumble first."

Despite her years of management experience in the nonprofit world, she has struggled to find work for over a year now and spends much of her time volunteering with Island Harvest Food Bank and with seniors at Paumanack Village in Greenlawn. Volunteering helps keep her "sharp" and "in the game" while she continues to look for work, she said.

She spent some of the stimulus money she received on a revamp of her resume, an "investment and leap of faith."

"I do see light at the end of the tunnel," she said.