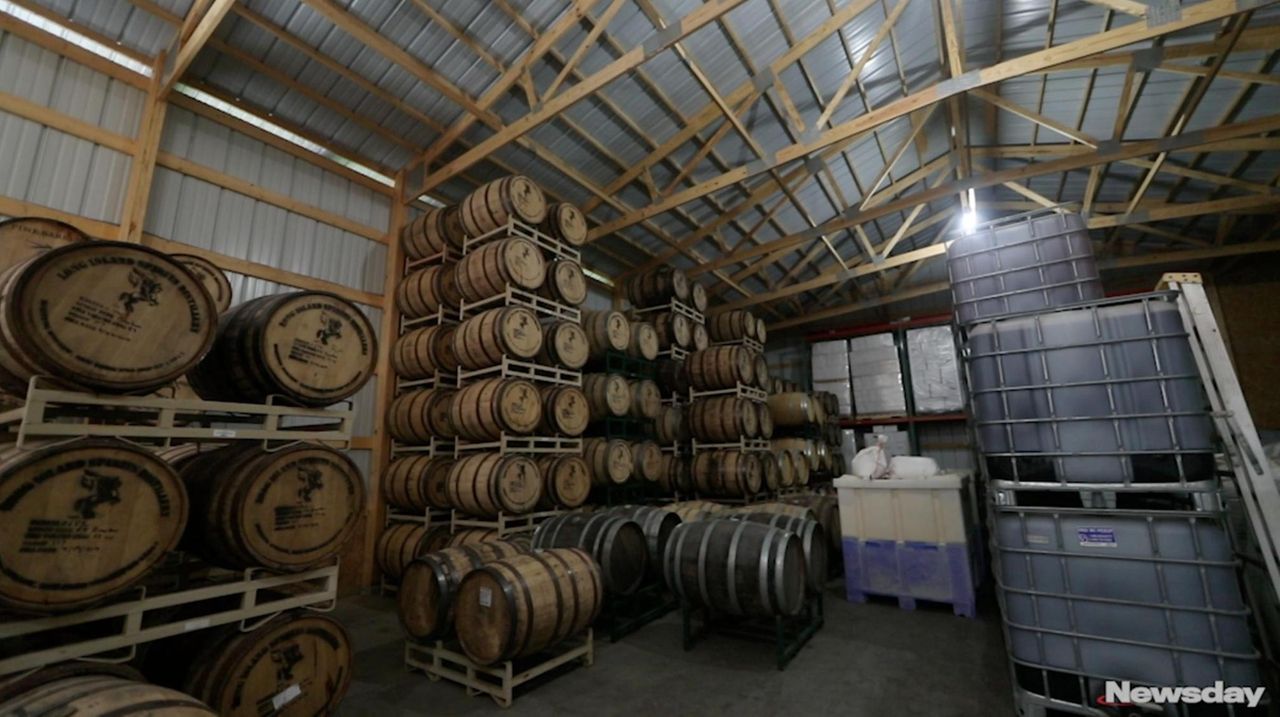 The number of craft distilleries has risen on Long Island during the past six years. Richard Stabile of Long Island Spirits, which has been in operation since 2007, bills his business as the Island's first craft distillery. Credit: Randee Daddona

The number of distilleries on Long Island is growing as local entrepreneurs, from backgrounds as varied as technology, marketing, construction and farming, have been generating interest in their craft liquor.

The number of craft distilling operations here, many of which use towering copper stills, has risen from two in 2012 to eight in 2018, according to the New York Liquor Authority. The local spirits businesses include makers of vodka, such as Sagaponack Farm Distillery; vodka, whiskey and other liquors, like Long Island Spirits; some traditional wine producers like Wölffer Estate Vineyards, which also makes gin, and Shinn Estate Vineyards and Farmhouse, which makes brandy and grappa; and even Twin Stills Moonshine, which distills a legal version of the clear, high-alcohol-content liquor in Riverhead.

All of the distilleries, which have forged relationships with farmers locally and around the state, are located in eastern Suffolk County, close to the stuff of spirits: fields of corn, rye and potatoes.

“The growth has been exponential” across the state, said Vincent Bradley, chairman of the New York State Liquor Authority, which regulates the manufacturing and sale of alcohol. “They really are growing all over the place.”

Consumer demand for locally sourced products that have strong ties to their communities is driving the growth of the industry.

“Overall, there’s an increase in market demand for products that are local, traceable and in many cases farm-based,” said Jenn Smith, director of the New York State Distillers Guild. That demand for newer, eclectic offerings is mostly being driven by younger-adult drinkers, she said.

“We know that the young consumer is not married to one type of beverage,” Smith said. “Your 25-to-35 year-olds are defined by their willingness to try new things and their interest in products that have a story. A craft producer is well positioned to tell that story.”

Long Island is home to more than 130 craft manufacturers of wine, beer, liquor and hard cider, up from 79 in 2012, according to state data.

The state has 1,021 craft beverage manufacturers, including 162 craft distillers, up from 48 distilleries six years ago.

While much of the growth in craft beverages has been in breweries — the state is home to 404 breweries, with 44 of those in Nassau and Suffolk counties — New York ranks second in the nation behind California in terms of craft distilleries, according to the state.

The Island’s distilling scene is “a microcosm” of the state’s growth, Smith said.

The number of craft distillers in the United States grew by 20.8 percent between August 2016 and August 2017, to 1,589, according to the latest data from the American Craft Spirits Association. Craft spirits sales reached $3 billion that year, with an annual growth rate of 25 percent.

Stabile said he often traveled abroad during his career, which included stints at Sperry, Unisys and Canon USA. During off hours he visited distilleries, wineries and breweries in Japan and Europe, and developed a passion for the industry.

“I just started to lose my interest in the tech world,” Stabile said.

Around 2004, the idea of opening his own distilling business began to form. “In the tech world, if you miss a day or two in delivering a chip that’s going into someone’s product that is due two years from now, it’s a major problem. In the spirits world, the longer it stays in the barrel the more valuable it is,” he said.

Spirits made in Stabile’s 10,000-square-foot distillery are sold in more than 35 states and parts of Canada. A bottle of the company’s 750 milliliter LiV Vodka or Rough Rider Double Casked Straight Bourbon usually runs $25 and $35, respectively.

Stabile expects the business to generate about $2.5 million in revenue and sell 12,000 cases of liquor this year. When he launched his business, however, he had no road map for starting a distillery.

“It was incredibly difficult,” he said. “We had to cobble together things from the brewing and the wine industries because there really wasn’t a distilling industry unless you were a global powerhouse.”

Stabile also started his business before the state began efforts to make it easier for craft beverage businesses to expand.

More than 550 craft manufacturers have set up shop since the state hosted its first Beer, Wine, Spirits and Cider Summit in 2012. Since then, a bevy of new laws backed by Gov. Andrew M. Cuomo, including the Craft New York Act in 2014, have reduced license costs, lowered taxes and sped up regulatory processes for aspiring craft alcohol businesses, Bradley of the Liquor Authority said.

Before the state’s focus on growing craft manufacturing, Bradley characterized the Liquor Authority’s interaction with nascent distillers as fruitless.

“When a business called and said, ‘Can we do this?’ the normal, automatic answer was no,” he said. “Now we try to work with businesses as much as possible.”

The state’s move to encourage distilling led to a sudden change of course for sixth-generation farmer Dean Foster and his family’s more than century-old potato farm.

Foster, owner of Sagaponack Farm Distillery, and his head distiller, Matt Beamer, purchased distilling equipment in 2012. The goal was to use the struggling family farm’s abundant agricultural resources to launch a $10 million liquor distilling operation. The company produced about 600 gallons of vodka last year and has around 2,500 gallons of spirits aging at its distillery.

“I’m not a big drinker,” said Foster, who has worked his family farm since childhood. “I enjoy good spirits and I think they’re wonderful. But it’s not something I really thought I’d be doing, because I was really interested in growing good, safe food.”

Foster, who launched operations at his distillery in 2015 and whose flagship Sagaponacka Vodka, which retails for $35 per bottle, can be found in more than 30 liquor stores and restaurants on the East End, said if the farming business were still viable, he likely wouldn’t have begun distilling.

He said that free trade agreements instituted by the United States in the ‘90s hurt the potato-growing business’s ability to compete because imported potatoes cost less than those grown on Long Island.

“We bumped it on down the road and stayed in business, but I watched every year us losing presence in the shipping community,” he said.

“I would love for every farm to have the opportunity to do what we’re doing, because I think it’s a possible model for success,” said Beamer, who characterized the business as a “seed to glass” operation.

Those in the industry expect more craft distilleries to open locally and across the country, despite challenges liquor producers face that differ from those faced by their craft beer, wine or cider counterparts.

Distillation involves the boiling of fermented agricultural products, such as grain, fruits, or vegetables. From that heated produce mixture, or mash, flammable, vaporized alcohol is extracted before it is cooled to liquid form. Given the presence of flammable vapors, the process can be dangerous.

“It’s a very costly investment building a distillery,” said Alexandra Clough, spokeswoman for the American Craft Spirits Association. Additionally, she said, federal taxes have historically been higher for distillers than for wine or beer makers. “A brewery can be started for a lot less.”

For Twin Stills Moonshine in Riverhead, one challenge the family operation faces is consumer unfamiliarity.

“Everybody asks what is moonshine? Is moonshine legal?” said Joseph Cunha, co-owner of the Twin Stills distillery.

Moonshine, originally slang for illegal high-proof spirits often produced at night to avoid detection from authorities, today is a legal product categorized as a clear whiskey, normally made with a base of corn mash. Unlike traditional whiskeys, which take on a deep amber color in the barrel aging process, moonshine is unaged.

“Moonshine is basically a fanciful name for whiskey,” said Cunha, who previously ran a concrete construction company in Manhattan. “Some people call it corn liquor, corn whiskey. There’s a lot of different names for moonshine.”

Patricia Cunha, co-owner of the distillery, said she and her husband must regularly educate potential customers about their products, including their 12 varieties of moonshine.

“We find that when people come in they’re very hesitant, but once they try it they love it,” she said. “Then they’re ordering cocktails and they’re hanging out and they’re buying bottles.”

The origins of the distillery, and its Long Island o’Oldtymer brand, date back to Portugal in 1926 when Joseph’s grandfather began distilling grappa. It was a tradition he kept up there until he ceased operations in 2002; he died in 2006.

After visiting family in Portugal in 2013, the couple bought its first still.

“We wanted to keep the tradition going,” Patricia said.

The business — now equipped with two larger, 250 gallon copper pot stills made in Portugal — sells its products, including its popular apple-pie-flavored moonshine, in over 50 stores and restaurants, including Selden’s Pennysaver Amphitheater, on Long Island. A larger bottle of the company’s flavored moonshine sells for around $42.

Matchbook Distilling Co. was founded by married couple Leslie Merinoff Kwasnieski and Brian Kwasnieski, who have sales and branding backgrounds in the liquor industry. The company is developing a 38,000-square-foot distilling operation in Greenport.

The company, which expects to begin production in the fall, will not produce spirits under its own label but instead will operate as a contract distilling facility and incubator for bars, restaurants, and entrepreneurs interested in having their own signature spirits.

“We are totally hoping that we will get people who are passionate about trusting us to get a great product for them,” said Paul Monahan, chief marketing officer. Distilling contracts will start at $10,000.

The distilling operation has been outfitted with custom equipment, including 100-, 300- and 600-gallon stills. Clients will be able to have custom spirits produced in bulk, bottled, labeled and marketed by the company, Monahan said.

“Making successful brands does not just start or stop with putting great liquid in a bottle,” he said.