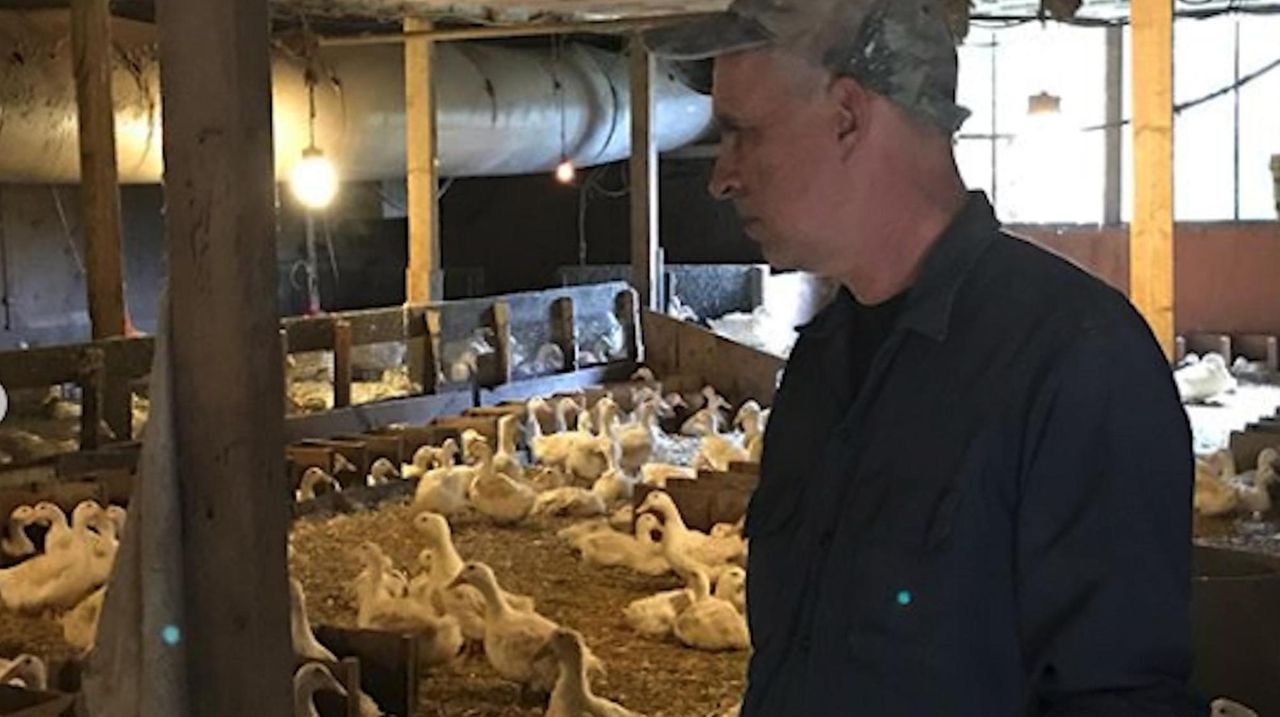 Doug Corwin, president of Crescent Duck Farm in Aquebogue, discusses working on the 145-acre farm, which processes 5,000 ducks four days a week for the best restaurants in the Northeast and across the country. Credit: Newsday / Mark Harrington

There is no rest for Doug Corwin, Long Island's last duck farmer.

The ups and downs of the once-thriving industry have left his family-owned Crescent Duck Farm in Aquebogue the sole mass-producer of the fowl on the Island.

Corwin and a dozen family members are busy making this 110-year-old company tick. There’s the never-ending job of feeding and monitoring 1 million ducks a year during their six-week life cycles, the 5,000 ducks that get processed for distribution to restaurants and poultry stores four weekday mornings at 7 a.m., the constant monitoring of wastewater to meet stringent standards and minimize odors. And there’s the plan for a new hatchery that will be among the most modern additions to the humble-looking but cutting-edge facility.

Corwin, 59,  president, misses the days when there were more than 80 duck farms across Long Island.

“To me it’s sad,” he said in his Aquebogue office, where aerial photos of the farm through the years adorn the walls. Noting that two of his fellow graduates from Riverhead High School grew up on duck farms, he added, “It’s not like the old days.”

There were Duck Council meetings, and duck cooperatives, two major feed mills, lively industry banquets and active participation in the Cornell Duck Research Lab in Eastport, where he’s been president since 1986. (The lab is a "national and international" resource on duck production and a manufacturer of drugs to treat the animal's diseases, the lab's website says.)

The institutional knowledge of the region and duck farming lies here, on the unassuming warren of duck barns, hatcheries, sewage processing tanks and pumps and the gray stucco headquarters and processing plant — all situated on the 145 acres the Corwin family has owned since 1640.

Crescent Duck Farms occupies an enviable niche in the market for duck meat. It controls around 4 percent of total U.S. production, delivering duck breasts and whole ducks to the “white tablecloth” restaurant market, with clients from Philadelphia to Boston. Its two trucks operate constantly, supplying distributors throughout the region. Some high end restaurants as far away as Hawaii will only sell Crescent duck breasts, and the company ships two pallets a month in a freezer car to Los Angeles for shipment to the island state.

“The reason we chose that duck is because of the quality of the duck as well as the specific size we’re looking for,” said Chase Heu, general manager at Morimoto Asia in Honolulu, a restaurant conceived by "Iron Chef" Masaharu Morimoto. “We use that for various locations.”

Long Island's East-End-centered duck industry reached its peak in the 1950s.  Increasingly stringent regulations on the duck waste produced on the farms, as well as financial hardships, temptations to sell land to developers, lack of heirs to run the business and flight to less expensive regions such as Pennsylvania caused the pack to dwindle. By the time Corwin graduated from Cornell University in 1980, there were 30 left.

To survive, the company has had to adapt. It bought Beacon Feed in 1984, and continues to run the operation as Eastport Feeds, supplying not only its own operations, but operating a retail store  and supplying poultry and horse farms in the region.

“The owners [of Beacon] realized the duck industry on Long Island was shrinking,” said Corwin. “They said either you buy the place or we close it down.” Around 80 percent of the 300 tons Eastport Feeds sells each week goes to Crescent Duck Farm.

Through the decline, Corwin and his family took vital lessons from others in the local industry , some of whom sought profits by cutting corners and veering from their business models. “The downfall of a lot of this industry is they paid themselves as farmers to produce weight and not to produce quality,” he said.

For Corwin the essence of the business is simple. “Feed and genetics are key,” he said. “I spent an awful lot of time trying to make a very meaty duck. The two work hand in hand.”

But the details of the business, with an estimated $13 million in annual revenue, are much more complicated.  The roughly 5 million pounds of top-grade duck meat the farm produces each year are eclipsed by the mountains of duck waste that move through it, and managing that mountain ecologically has been a little-discussed key to the farm's endurance. They’ve kept local regulators largely at bay by investing upwards of $5 million on modern waste-treatment facilities that process more than 100,000 gallons of sewage a day — and bring it to the federal standard of 10 milligrams of nitrogen per liter over a 10-day cycle, from over 1,000 milligrams per liter.

Even on a stifling August day, a visitor is hard-pressed to tell there’s a poultry operation at the headwaters of Meeting House Creek. Wastewater is monitored constantly, as it passes through a massive oxygen-free digester tank, chemical treatments, and aeration in 16-foot-deep concrete pools. Corwin called the waste treatment the “core of the operation.”

Even when the final dry waste product is stored and sold or used for manure, it’s kept in covered barns with concrete pads to prevent leaching into groundwater, a practice New York State has only recently required of composting and mulching facilities. It's part of what Corwin calls staying ahead of regulators in a way that also makes the place good for the neighbors. The company in 2016 applied for $250,000 in aid from Suffolk to construct a building to contain composted waste in a covered, bottom-sealed facility.

"We found a formula and a way of doing business that made us quite a lot different than our competitors,”   Corwin said, one that stresses being part of the community, not an adversary. “This isn’t a corn maze,” he added. “But we said, ‘Let’s try to be as nuisance-free as we can. Let’s try to be a good neighbor in our community. Let’s try to keep this heritage.”

Waste treatment costs 25 cents for each pound of duck Crescent produces. (Feed and labor represent 80 cents of the total $2 per pound cost to raise a duck.) Taxes aren’t overwhelming, he said, because the farm gets taxed (in Riverhead) at an agricultural rate.

But other costs that drove competitors away continue to put pressure on the operation. Feed costs on Long Island are 10 to 15 percent higher than in Pennsylvania, he said, and labor costs are almost double that state's.

Family members can work up to 90 hours a week. A unionized workforce of 47 does much of the processing. A USDA inspector stands on the production line each morning ducks are slaughtered, cleaned and processed.

Around 60 percent of the ducks produced in the United States, most in Pennsylvania and Northern Indiana, go to the Asian food stores and restaurants across the country. Relatives of a former Long Island duck farm operated by the Jurgielewicz family from Moriches, control around 35 percent of the U.S. market from facilities in Pennsylvania, much of that through contract growers. Crescent does not contract out duck raising.

While Corwin has been in charge of sales operations since 1987, he credits his father, Lloyd Corwin Jr., who died in December, for instilling both a work ethic in the family and a financial acumen that brought the company through challenging times. “He was smart enough to give out enough responsibility to let you stand on your own two feet,” he said, a practice that Corwin said he has followed with his own sons. His father might “grumble” when losses crept up, but he was a “smart man. He held this place together in a very perilous time.”

“My father learned how to run it and how to be fiscally tight,” he said. He moved the growing operation from outside pens to inside barns in the middle 1960s, a difficult transition that required new methods to overcome disease and other problems. Controlling waste and its impact on land and water was the chief reason for the move indoors. "We had to get the nitrogen off of the land," he said.Waste goes directly into plastic pipes and into sewage treatment plants.

“We’ve overcome that,” Corwin said, and now all operations are indoors. It’s considerably easier to clean up controlled, indoor barns than outside pens, and odors and other aesthetic impacts are reduced when operations move indoors.

“We spend a lot of time figuring out what makes ducks comfortable and happy.” Temperature is tightly controlled from hatchery through the six-week maturity, feed is precisely tuned to maximize meat, and waste is removed at constant intervals.

Plans for the new hatchery are front and center for Corwin. The plans occupy his entire desk. The project will likely cost upwards of $2.5 million, but will bring new levels of automation, monitoring and computerized controls, more than any other facility on the property. The existing hatchery is “outdated and constantly falling apart,” he said. “We knew we had to invest in a new hatchery.”

With the new hatchery, the potential is “huge.” Sanitary controls will be better than ever, improving duck health and food quality and safety, he said. Duck incubation occurs over four weeks, and all ducks are bred in a special breeding barn where, at a 5 to 1 ratio of females to males, breeder ducks live for around a year. Growing ducks eat an average of around  0.7 pounds of feed per day.

Duck meat represents 94 percent of the company’s sales. Around half of that volume is in cut-up duck parts, the remainder in whole ducks. The farm produces 200,000 pounds of feathers each year, sold for around $3 a pound in Asia, primarily China. Feathers represent around 5 percent of the company’s revenue. A remaining 1 percent of sales includes the sale of eggs, manure, and a small portion for leasing out land to a local farmer.

The company makes around 140 yards of manure per week from the dried sludge that remains of duck waste.

Crescent is among the larger users of electricity on the North Fork. It uses around 500 kilowatt-hours of electricity each day, and has two backup generators capable of powering operations — fans, waste pumps, computer controls, lights — if the power goes out. (The average Long Island home uses a bit more than 25 kilowatt-hours of electricity a day.) The farm has a natural gas line from National Grid to power the pumps and even produces some of its own methane gas to power them. Heat from the pumps is also used to elevate temperatures during the waste cycle.

Corwin is watchful of opportunities to grow, but it’s not going to happen beyond the company’s means, he said. “I don’t have any grand design of trying to grow much,” he said. “Not to say that if we have everything tuned up, we won’t do it here or there.” A 5 percent or 10 percent annual increase isn’t outside the realm.

His Northeast distributors have branches in the Midwest, the South and elsewhere that could probably sell any production beyond the norm. But “I’ve got to learn how to do this right first,” he said. “I don’t want to be greedy. I’m not in this to make money. I’m here to do it the right way and to be proud of what we’re doing.”

And don’t expect Crescent to sell the operation to an outside finance group intent on getting a piece of the last player in a consolidating industry.

“I look at those people and roll my eyes,” he said. “Why would someone like us want to be in bed with people like that — people who are not going to work the work, put on the boots and walk the mile? If that day ever comes, let’s find a way to elegantly get out of the business. I don’t see that day.”

Crescent Duck Farm by the Numbers

1 million: Ducks processed in a year