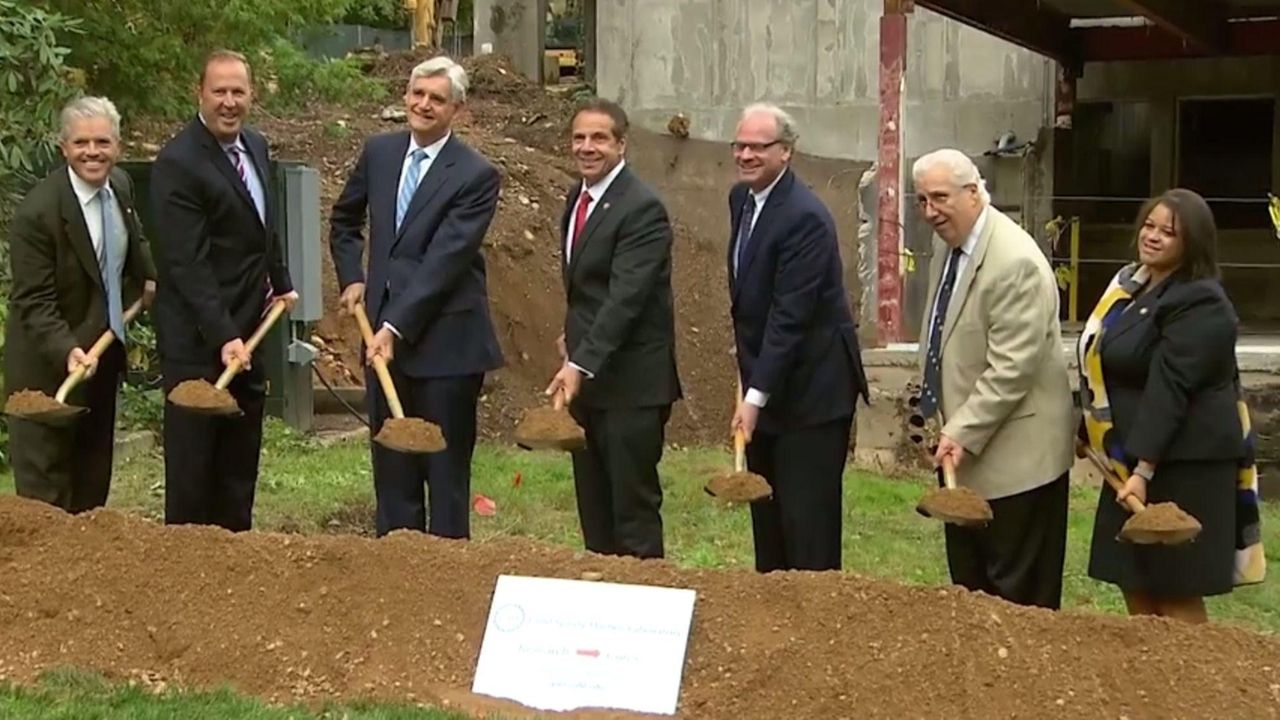 Long Island can “own the space” in biomedical technology if it succeeds in commercializing the region’s research, Gov. Andrew M. Cuomo said Thursday at a groundbreaking for the $75 million Cold Spring Harbor Laboratory Center for Therapeutics Research.

The new 26,000-square-foot laboratory, expected to open by the end of 2018, will seek to advance research in treating leukemia, autism, obesity, diabetes, breast cancer and lung cancer.

It will be housed in the renovated and newly equipped Demerec Laboratory, a 64-year-old building on the CSHL grounds. New York State included $25 million in its 2016-2017 budget for construction of the facility, part of $331 million in state money earmarked for a Long Island “research corridor” and other projects.

The CSHL project will create 30 new jobs for scientists and help retain 25 existing ones, in addition to construction jobs and jobs indirectly supported by the facility, a spokeswoman for the governor said.

Cold Spring Harbor Laboratory already has raised more than half of the remaining $50 million for the project from private philanthropic sources. That money will be used for recruitment, research projects and operations.

Attending the groundbreaking was Emma Larson, a 4-year-old from Middle Island stricken with spinal muscular atrophy, a rare neurological condition and the leading genetic cause of infant mortality.

Emma’s mother, Dianne Larson, said the initial diagnosis was grim. “Basically, we were told we were going to just watch our child die,” she said in a telephone interview Thursday. But the Larsons found a Cold Spring Harbor scientist, Adrian Krainer, the inventor of nusinersen (Spinraza), a drug in clinical trials.

Emma, who couldn’t sit up to hold a bottle before being enrolled in the trials, now can walk on crutches, her mother said. “We went from hopeless to hopeful.” The Food and Drug Administration approved the drug in December 2016.

But he said that until now Israel, California’s Silicon Valley and Massachusetts’ Route 128 have overshadowed New York in turning academic and scientific research into commercial products.

“We have great scientific academic research facilities and we have great commercialization facilities, but the connection was never made the way it was in other places,” he said.

Cold Spring Harbor Laboratory boasts eight winners of the Nobel Prize for Physiology or Medicine. The winners were full-time faculty members, summer researchers, postdoctoral fellows, or experimenters at the lab. They include James Watson, who discovered the double helix structure of DNA with Francis Crick and later became director of the laboratory.