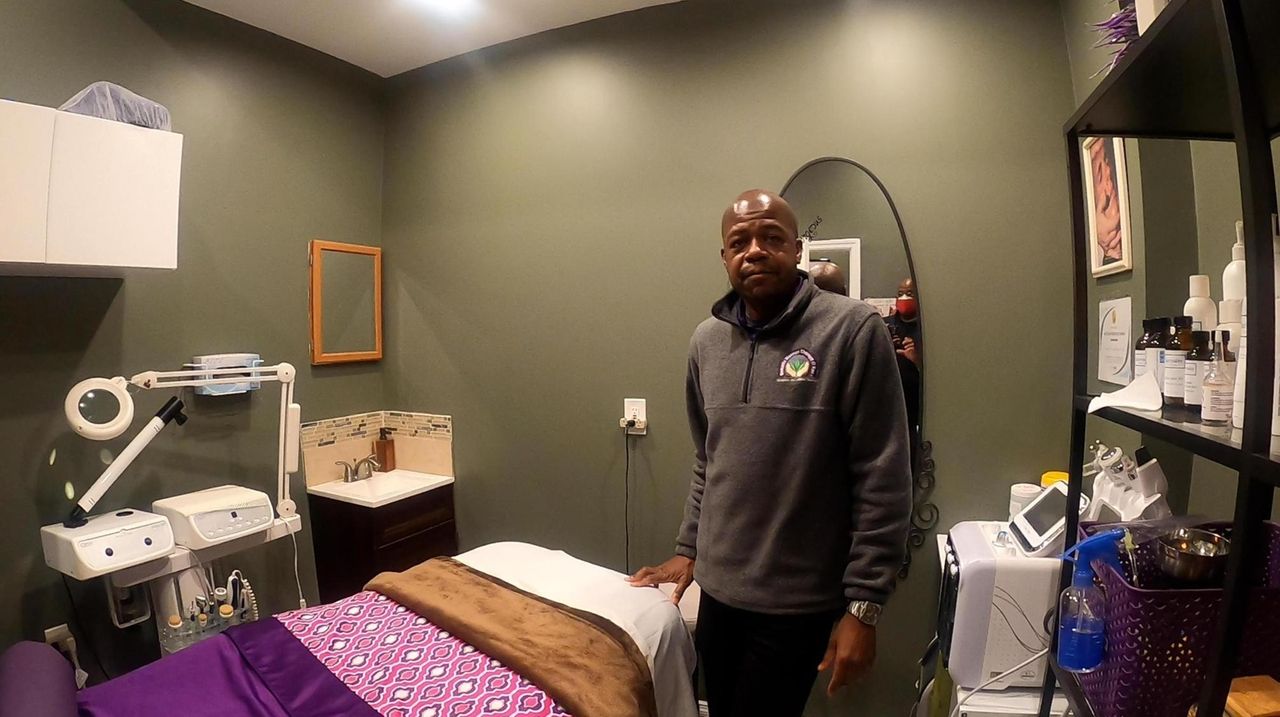 Cameron Richards is the owner of Somatic Massage Therapy & Spa in Floral Park. On Tuesday, Feb. 16, he spoke about the importance of maintaining a strong presence in the Black business community. Credit: Newsday / J. Conrad Williams Jr.

Caprice Campbell was shocked when the Valley Stream bakery and ice cream shop she co-owns suddenly sold out of ice cream one Sunday in July. It was the first time the 3-year-old business had seen such a rush.

The "nonstop traffic" was unexpected but "more than welcome," Campbell said. The driving force behind the sudden uptick in sales? A post on Black Long Island, a private Facebook group with thousands of members, calling on others in the Black community to "show up and show out" at Campbell's bakery.

Protests for racial justice, which sprang up across the country last summer in the wake of the death of George Floyd — the black Minneapolis man killed by a white police officer — paired with the pandemic's disproportionate hit on Black-owned small businesses, have fueled a push to support Black-owned establishments.

"It's undeniable that Black-owned businesses are having a moment," said Andrews, adding that the Chamber's website includes a directory that exclusively lists businesses owned by members.

"More than ever, and in large part thanks to the Black Lives Matter movement, all eyes are on us," he said. "People are doing their homework. They're going online and researching, actively looking for Black-owned businesses to support."

Interest also ballooned on Yelp; in July, just months after Floyd's death, the site saw an increase of more than 7,000% in searches for Black-owned businesses compared to the same time the year prior.

A form of activism

For many patrons, the decision to shop at Black-owned businesses is a form of activism, closely tied with a desire to "economically empower" Black people, said Campbell, who along with her aunt, Darlene Edwards, and cousins, Dale Campbell, and Eleesa Abrams, owns The Best Goodie Bag bakery.

And the effort, Edwards said, "is not just coming from within the Black community."

"We've seen an increase in diverse traffic, with people of all races, including a lot more white people, coming in to our shop than before."

Campbell recalled a recent afternoon when she and Edwards got a call from a customer who described herself as an older "white lady."

"She outright told us she was looking for a Black-owned bakery to order from. She said she wanted to surprise one of her friends with a cake and wanted to make sure she was ordering it from a Black-owned business," Campbell said.

"I'm not entirely sure how she found us but she did mention she wasn't a local, so I'm pretty sure it was through an online directory."

As consumer interest in shopping at Black-owned businesses surges, such directories — both local and national — are playing a pivotal role in helping shoppers find businesses to support, Cameron Richards, owner of Somatic Massage Therapy & Spa in Floral Park, said.

"Striving for that visibility is a must," said Richards, whose business is listed on a directory on Shades of Long Island, a Wheatley Heights-based media site aimed at highlighting diversity on the Island.

"These types of sites are places to say, 'Hey, you want to support me? Here I am' ... because a lot of times people just don't know. They have no idea that my business is Black-owned."

Listings on Black-owned business directories have helped Richards connect with new clients, both Black and non-Black.

"Which is a good thing, a great thing," he said. "Black businesses are often forgotten or missed, so these directories and listings really do make all the difference."

Here's a look at three LI-based Black-owned business directories and those responsible for bringing them to life:

Billy and Falischa Moss, both 43, started private Facebook group Black Long Island in 2016 as a way to unite the Island's Black community.

The Brentwood couple had searched online for sites listing local Black-owned businesses to support and had come up dry.

"We were looking for a place where we could find that sense of community, where we could engage with other Black people on Long Island, talk about Black issues, learn about local Black-owned businesses, all of that in one place," said Falischa Moss, who works at the Suffolk County Department of Labor.

"But there was no central hub. ... When we realized that, we said, 'Let's just go ahead and create that space ourselves' — a place for Black people, by Black people."

The Mosses had no idea how quickly their page would grow or the strong following it would garner: Black Long Island now has more than 36,000 members "and counting," Falischa said.

The deep interest drawn by their Facebook group motivated the couple to launch BlackLongIsland.net, a website featuring articles, events, community and educational resources, and a Black-owned business directory.

"The directory is free, we don't charge any fees for listings," she said.

"I'm often asked why we don't but, honestly, it's because I see the work we do as a necessity. That's always been our mindset. The reason we started this in the first place was a lack of representation, so we don't want to discourage anyone from joining."

For Billy Moss, director of academic affairs at Lawrence High School in Cedarhurst, promoting Black-owned businesses on his platforms is important because doing so "breathes financial life into the Black community."

"In order to build Black wealth, people in our own community must direct their dollars there, into the community," he said.

Claudia-Ann Arthur, a native of Trinidad and Tobago who moved to the Island about four years ago, said finding out about Black Long Island was nothing short of a blessing.

Arthur, a licensed cosmetologist who since 2018 has owned natural hair business Claudified Hair Studio in Garden City, first posted on the page after a client suggested she join the group and share pictures of her work there.

"It was kind of like a snowball effect ... so many comments and shares. I remember it was around Christmastime and I was suddenly overwhelmed with work. Since that day, I'm always booked," she said.

D'donna Walrond, of Roosevelt, saw Arthur's post and was quick to become a regular. After visiting Arthur's salon, Walrond again took to Black Long Island — this time sharing a lengthy post raving about her experience.

"The amount of love, support and business I've gotten thanks to Black Long Island is incredible," Arthur said. "Especially for someone like me, who was new to the area and was trying to establish myself and grow. It really speaks to the power of our community."

Of this Falischa Moss said: "Sometimes in the Black community we don't see our own value, our own power; through Black Long Island we're doing our part to change that."

Alicia Ray categorizes the work she does through her online Black-owned business directory and media site, BlackOwnedLongIsland.com, as "the connective tissue, connecting Black businesses with consumers, Black consumers and consumers of all races."

"To be sustainable, all businesses need repeat customers. Black-owned businesses are no different. But they've been disenfranchised since the dawn of time, they've been affected by systemic racism, a lack of resources. We know the odds are stacked against them. Our mission is to help them not just survive, but thrive."

Ray, a native of Jamaica who grew up in Miami and works as a product marketing manager for a tech company, said she was inspired to create BlackOwnedLI in 2017 after noticing how much harder it was to locate Black-owned businesses on the Island than it had been in her hometown.

"I started to venture out and started documenting all the Black-owned businesses I found, beauty salons, food spots and everything in between to fill the need for myself and for others," Ray said.

BlackOwnedLI's directory, which is free, now includes over 100 businesses in a range of industries, and is accompanied by a blog where Ray regularly posts articles featuring standout businesses like Royal Cyn Beauty Store in Baldwin —"one of the few Black-owned beauty supply stores on LI" — and Cozy N Cute Kids Boutique, an online children's clothing boutique opened this summer by Middle Island mom Priscilla Wesson.

"The BLM movement reignited the interest in all things Black-owned," Ray said. "We want to make sure that we're telling these stories, that we're highlighting these business owners, these individuals in our communities, so that they're supported and sustained by everyone, way beyond just a fleeting 'moment.'"

Miya Jones, a 24-year-old journalist who founded Shades of Long Island, a media outlet focused on highlighting "the diversity and fullness of minorities" here, said "buying Black" is another way of furthering the cause so many took to the streets to advocate for this summer: racial justice.

It was with that thought in mind that Jones, of Wheatley Heights, decided to partner with Godson Michel, owner of Lindenhurst agency Blue Surge Marketing, to create Shades' Black, Indigenous, and people of color (BIPOC)-owned business directory.

"It's always been important for me to elevate representation of Black people, as well as of people of different shades, different ethnicities," said Jones, who also works as a virus contact tracer.

"I think it's important for all minorities to band together, work together, support and appreciate each other. That's the idea...sadly, that's not always the case but I want to foster a space where that's encouraged."

Jones, who covered Black Lives Matter protests on Long Island for Shades, said spending money at Black-owned businesses is a way "of making your voice heard."

"Black businesses struggle with this erroneous public perception that they're not as good as businesses owned by others, that they're somehow not up to par, so this is definitely a form of activism as powerful, if not more, than marching in the street," she said.

"When you talk about money, people listen. Insert money into the conversation — now, you have people's attention. That's why it's important to be intentional about where you decide to spend your money, which businesses you choose to patronize."

"The protests, these widespread cases of racial injustice in the news, it's all been great motivation for a lot of people to make an effort to support Black business, which really means supporting Black entrepreneurs and their families — and Black business owners want the support," she said.

"They'll welcome you no matter what color you are. At the end of the day, everyone's money is green."