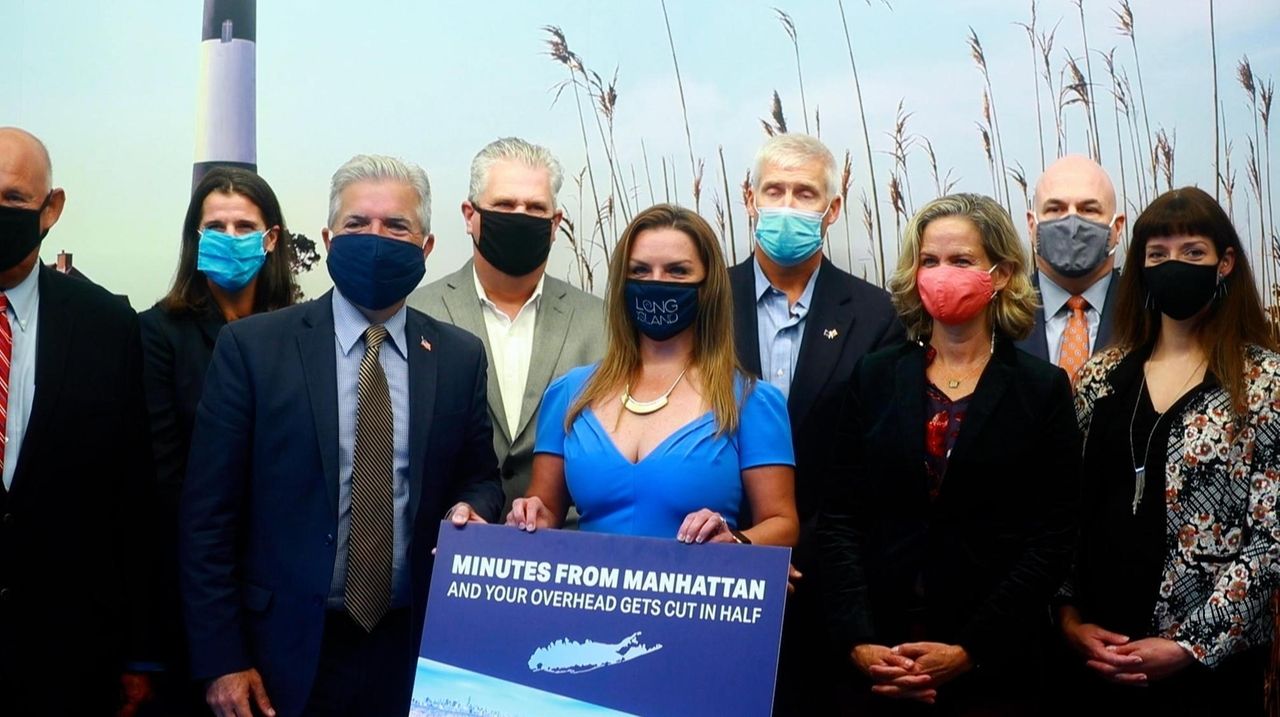 Long Island's eight IDAs and Discover Long Island on Tuesday announced they have formed a "collective" to attract companies and jobs as COVID-19 has changed how the Island is perceived as a place to live and work. Credit: Newsday / Raychel Brightman

Business executives from outside Long Island now have a virtual hub where they can see what the area offers to companies interested in moving here, officials said.

Both counties, their eight Industrial Development Agencies and the region’s tourism promoter on Tuesday unveiled a website and advertising campaign aimed at luring businesses to Long Island. They spoke at the state Welcome Center on the Long Island Expressway in Dix Hills.

Discover Long Island, the tourism promotions agency, has added pages to its website for statistics, maps and videos about the region’s assets. Executives from Canon U.S.A., Contract Pharmacal Corp., East/West Industries and others tout the workforce, research institutions, quality of life and the Island’s proximity to Manhattan.

Much of the information at discoverlongisland.com/business comes from IDAs, the Long Island Association business group, the trade group HIA-LI, Newsday and Long Island Business News, among others. The web pages are meant to "excite" prospective businesses about the region and direct them to an IDA, which can help them secure tax breaks, according to Discover Long Island CEO Kristen Jarnagin.

"This is a one-stop shop for people interested in relocating their business … It’s a tool that didn’t exist before," she said, adding the coronavirus has made the suburbs more attractive to companies and workers seeking more space.

Nearly 30 years ago, during another recession, a coalition of large employers, politicians, union leaders and educators formed the New Long Island Partnership to attract businesses. The partnership spent about $2 million on television, radio and newspaper advertising. In one year, 18 small businesses moved to the Island from elsewhere in the metropolitan area.

This time around far less is being spent on ads: $25,000 over 10 weeks initially. And the ads are targeted to executives using LinkedIn, Google and Site Selection magazine’s website. Banner ads directing executives to the new webpages will appear based on their interest in topics, such as biotechnology, aerospace, renewal energy and food manufacturing — the Island’s core industries.

The tourism slogan, "BeLONG on Long Island," has been tweaked for economic development — "Where businesses BeLONG."

Jarnagin said she expects the economic development ads to reach five million. In addition, the web pages were repeatedly referenced in a 24-page insert to the September/October issue of Site Selection, which is read by CEOs across the globe.

There are plans for a second ad campaign and a monthly e-newsletter, she said.

The initiative to attract businesses to Long Island began last year when Discover Long Island and the IDAs came together to form the Long Island Economic Development Collective and secured a $50,000 grant from National Grid, which was matched by the IDAs as group.

The collective "affords us the ability to strategically promote our destination to key decision-makers who could make a vital impact for our region," said Tracy Stark-James, executive director of the Riverhead IDA.

Babylon IDA CEO Tom Dolan agreed, saying, "When we work together, we can effectively raise national awareness of Long Island, and attract companies here who are looking for our quality of life and talented workforce."